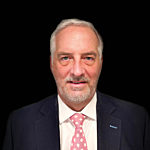 When the first edition of the Alchemist was published back in 1995, the gold industry was dominated by both producers and refiners located in the West, using west of the Urals as the dividing line. Furthermore, these sectors were also dominated by a small group of companies and producing countries.

As I wander through the archives of the Alchemist, various articles jump out at me and resonate in a way that, perhaps, they didn’t back then. Some of these articles were clearly visionary, with others providing salutary lessons that the gold refining industry overlooked for various inexplicable reasons. We will cover some of this as we journey through the Alchemist’s archive.

The first deep insight into what was to be the shift to the East appeared in an article by Dr. Graham Birch (Alchemist 4, June 1996, “Gold Shares: The Growing Importance of Far Eastern Investors”). It contained two sentences that at the time would have been seen as visionary or plain speculative:

“The strange thing is that most investors and mining companies in the ‘Western World’ are completely unable to see the long-term ramifications of the Far Eastern involvement in the gold share market.”

“This new group of regional buyers is unique in that they are or have been large buyers of physical gold. They are buying gold because they like it and gold shares for gearing. Woe betide any gold companies that take that gearing away from them.”

Back in 1995, there were 56 accredited Good Delivery List (GDL) gold refiners, of which 42 (73%) were based in the West. There were good reasons for this, as some 62% (1,435 tonnes) of mined gold was produced in the West and this was topped up by some 631 tonnes of global recycled gold. Over half of this mined production came from six countries and the refineries were, on the whole, strategically located in three of the top four producing countries.

There were two truly global giants in the precious metals refining space – Engelhard and Johnson Matthey, operated seven and six GDL refineries respectively. Interestingly, neither company had any refineries in Asia; however, they both had one each in Australia. Following closely in their footsteps was Degussa, which had four GDL refineries and was the first Western company to open a refinery in Asia with its Singapore operation, as well as the only commercial company with a refinery in South America, in Brazil. The single largest refinery at that time was the Rand Refinery in South Africa, which had a ‘captive supply’ from the worlds’ largest producing country. A year later, the US refinery Handy and Harmen was acquired by Golden West of Australia to create the Handy and Harmen Refining Group (HHRG). This was the era of ‘big is beautiful’, but not necessarily sustainable.

Barry Wayne, the then President and CEO of HHRG wrote an Alchemist feature (Alchemist 8, June 1997, “The Art and Science of Silver Refining”). In its final paragraph, he referenced the company’s near ten-fold increase in capacity in gold and silver refining over a 20-year span. At that time, HHRG was the company that most closely matched Engelhard’s and Johnson Matthey’s global reach.

Two and half years later, HHRG went bankrupt, and both Johnson Matthey and Engelhard began their strategy of closing or divesting their gold businesses. Big isn’t always beautiful!

In the same edition, two articles were scribed that continued to echo the words of Dr. Birch. In the first article, George Milling-Stanley, then the Manager, Gold Market Analysis, at the World Gold Council, wrote: “The first quarter of 1997 showed a much more dramatic rate of growth as overall demand jumped 22% … India, South East Asia, South Korea, Turkey, Saudi Arabia and the Gulf States all posted strong gains.”

The second article was entitled ‘Letter from Dubai’ by Jeff Rhodes, then General Manager, Standard Bank London Limited, Dubai, in which he summarised the first Dubai Gold Conference, as well inviting the market to join him for a round at the Emirates Golf Course! In the same year, an article by Fernando J.R. Borge, Director, Comphania Real de Metais, caught my attention (Alchemist 9, October 1997, “Casting Brazil’s Gold Rules”). Brazil has been a prolific gold producing country for decades. During the 1980s and 1990s, considerable amounts of this production came from “the country’s rich garimpos (alluvial deposits)”.

“The discovery of “Serra Paelada”, the world’s largest garimpo, raised the excitement level and, by the beginning of the early 1980s, these unofficial miners, or garamperios, were accounting for up to 91% of the total Brazilian gold production.” As you would expect, to service all this gold, a whole new gold refining industry was created, with Brazil hosting five Good Delivery refineries. 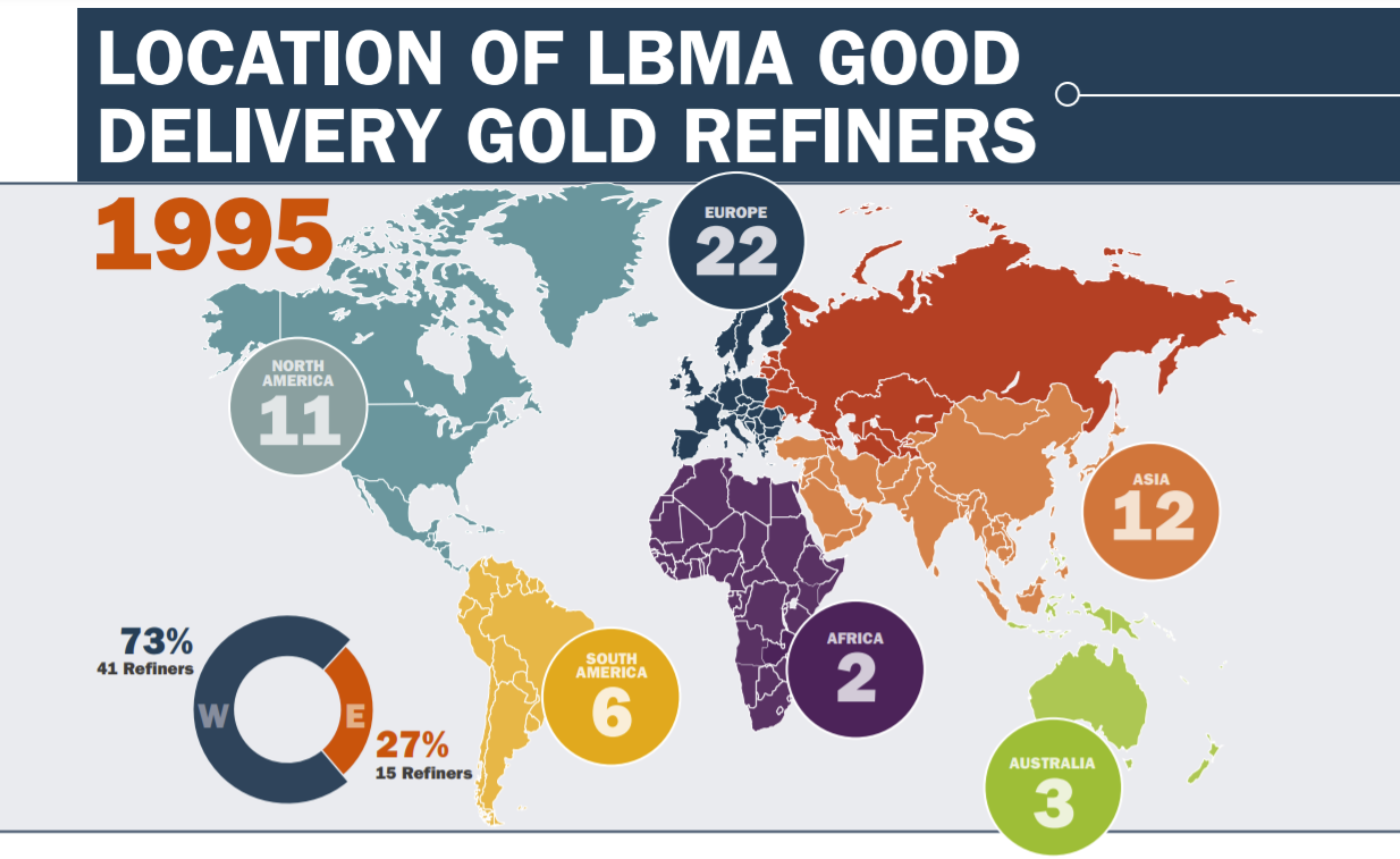 In contrast to all the attention on the East was an excellent article, in the same edition, by Andrea Debnam, Camden Council, and Judy Head, the Hatton Garden Association, entitled ‘The Golden Age’, in which the history and importance of both Hatton Garden and London to the global gold market was explained. One sentence seems to sum up the position of London then and now: “By the seventeenth century, the area’s transformation into one of the world’s major centres for goldsmithing, diamond trading and jewellery making had begun.”

It was also around this time that Johnson Matthey was formed and the gold from the 1851 California gold rush were flowing into London.

An article by Gold Fields Mineral Services (Alchemist 15, April 1999, “Asian Update – Long Scrap, Short Miracles”), describes how all the gold that the East had been sucking up began to flow the other way as the Asian Tigers turned into Asian Pussycats.

The near catastrophic collapse of the Thai, Korean and Indonesian currencies, and to a lesser degree those of China and Hong Kong, resulted in inflows from this region that the market had never experienced before nor may never experience again.

With limited Good Delivery refineries in the region, and absolutely no demand for gold, gold flowed to the only market capable of absorbing such quantities – London. Scrap was partially refined in Asia to near pure gold and converted to London Good Delivery bars, primarily in the UK, as the Johnson Matthey refinery was considered Loco London and was only 30 miles from the London vaults.

It was not unusual during this period for the JM refinery in the provincial town of Royston to process 20 tons of gold in a week from this distressed region.

However, the tide was already beginning to turn to the East, despite what had occurred during the Asian economic meltdown. After the crisis and once the economies began to grow again, demand resumed and the gold that flowed into London began to flow back to Asia.

The ‘big is beautiful’ strategy started to disappear as stalwarts like Johnson Matthey, Engelhard and Degussa either closed or sold gold
refineries in the following decade. Fast forward to 2021 and we have a near 180 degree swing in both the locations of Good Delivery Refineries and gold mine production.

Whilst the list of Good Delivery refineries has grown from 59 to 71, the growth has all come from the East.

In 1995, the East accounted for 27% of the London Good Delivery refineries but today it accounts for 62%. This dramatic change has been led by one country in particular – China. Over a 25-year period, the number of GDL refineries has mushroomed from one to 12. Japan has added four more to the list to make 11, and Indonesia, Kazakhstan, Taiwan, South Korea and India have also added to the numbers.

Furthermore, the last two remaining truly global gold refiners at the turn of the century – Johnson Matthey and Metalor – sold their businesses to Japanese companies, and Valcambi, Switzerland was sold to an Indian group. The East starts to move West.

Back in 1995, I doubt that any of the authors who wrote about the Asian Tigers foresaw the significant increase in gold mine production.

The East (including Australia) now accounts for nearly 1,600 tons of newly mined gold. In 1995, the East accounted for only about half this amount, at 864 tons. Overlaying this is a global recycling market that has grown from 631 tons to 1,403 tons2, with Asia representing over 50% of this market and the West a mere fraction. It is worthwhile commenting upon the changing themes in the Alchemist. The early editions carried many articles reflecting the growing importance of the Asian Tiger economies – what impact these would have on the traditional markets and companies in the West. The latter editions have seen the Alchemist turn its attention to the two very powerful and emotive topics of the 21st century, namely, recycling and responsible sourcing.

Articles on these topics started to appear around 2007, and below are a few extracts to show the shifting focus of both the Alchemist and LBMA.

Alchemist 49, February 2008, “Of Elephants and Yams – Thoughts on PGM Liquidity and Recycling in India” was written by Tom Kendall, then Precious Metals Strategist at Mitsubishi Corporation UK plc. The title refers to the saying ‘when discussing elephants, don’t talk about yams’, or for us Westerners, ‘when discussing major issues, don’t worry about the details’. Whilst the article was not necessarily focused on gold, Tom Kendall was among the early commentators on ‘recycling’ and ‘India’.

The recycling theme continued (Alchemist 59, July 2010, “Sustainable Recycling of Electronic Scrap’ by Chris Corti," COReGOLD Technology, and Christian Hagelüken, Umicore Precious Metal Refining). No article today would be complete if it didn’t reference the biggest change the refining industry has experienced, probably, since its inception – responsible sourcing, compliance, sustainability, ESG (environmental, social and corporate governance) to name but a few of the regulatory and other requirements that the industry now faces on a day-to-day basis.

One of the first articles to appear in the Alchemist on the subject of due diligence was by Gregory MthembuSalter, UN Group of Experts (Alchemist 59, July 2010, “Gold Industry – Due Diligence and the DRC”). The subject of Artisanal Small-Scale Mining (ASM) and how to operate in this sector remains an ongoing challenge for the industry and one that warrants an article on its own and not a small side note.

The last article I will mention was a truncated version of a speech given by Michael Mooiman, Associate Professor, Franklin Pierce University, at the 2019 LBMA Assaying and Refining Seminar (Alchemist 93, April 2019 “Refining in the Precious Metal Sustainability Chain”).

Reflecting on the past 25 years, it is hard to see how the refining industry would manage a gold rush from California let alone Brazil – compliance would have a ‘melt down’. Would another Asian crisis see flows to the West, or would all that gold be refined and delivered to local exchanges?

The shift to the East will no doubt continue, as markets develop to rival the West, backed by government support, as well as an insatiable desire to hold gold. There are 12 GLD refineries in China and 11 in Japan, yet the second-largest consuming market has but one – how much longer can that go on for? Will the next decade see the emergence of the Indian subcontinent? Hopefully, someone will pick that up by the time the Alchemist hits its 150th edition.

With special thanks to Neil Harby for all his support in pulling this article together.