The story behind facing facts

Facing Facts first appeared as a standing Alchemist feature in 1999 initially by the late Paul Burton (Alchemist 92, January 2019 “Obituary”) World Gold (extract above and in full in Alchemist 16, June 1999 “Facing Facts”) to cover the key developments in the mining industry. Paul continued to write the column until 2012, after he merged World Gold into GFMS in mid-2008 and the takeover of GFMS by Thomson Reuters in 2011. Since 2013, the column has been written by a number of analysts at Thomson Reuters which, was rebranded as Refinitiv in 2018. 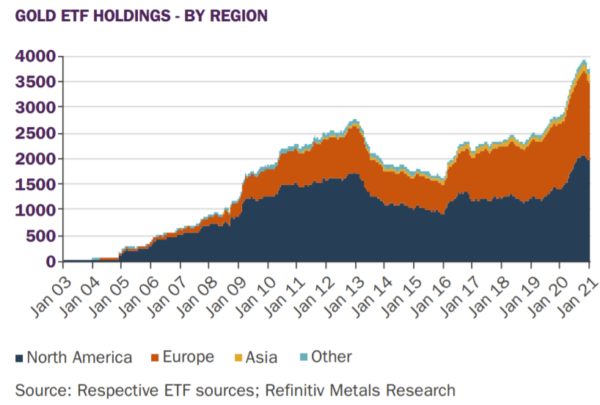 Investment in gold exchange traded funds (ETFs) surged to a new peak in 2020. After 12 consecutive months of net inflows from November 2019, and with investors adding more than 1,000 tonnes of gold between January and October 2020, global ETF holdings reached an all-time high of over 3,960 tonnes by the second week of November.

To put this into context, net inflows during the first ten months of 2020 were over 65% higher than the previous record in 2009, when annual buying reached 644 tonnes.

The largest increase was registered by North American-listed funds, with holdings rising by 45% or nearly 640 tonnes (US$36.4 billion) from the end of 2019 level, accounting for nearly two-thirds of global net inflows over that period. European funds added 346 tonnes (US$19.7 billion) over the ten-month period, representing a 27% increase from the level seen at the end of 2019. Holdings in Asia and other regions grew by 57 tonnes (US$3.2 billion) and 24 tonnes (US$1.4 billion), respectively.

The surge was driven by the COVID-19 outbreak, which saw the global economy plunge into the worst downturn since the Great Depression. This prompted governments to announce unprecedented stimulus measures, pushing interest rates into more negative territories, all of which boosted gold’s safe-haven appeal. Furthermore, the logistical issues, caused by the virus outbreak, triggered the disconnect between the COMEX gold futures market and the OTC market in London. This resulted in higher premiums on futures contracts compared to the OTC price and increased cost of ownership, thereby encouraging some investors to switch to OTC holdings and ETF buying. 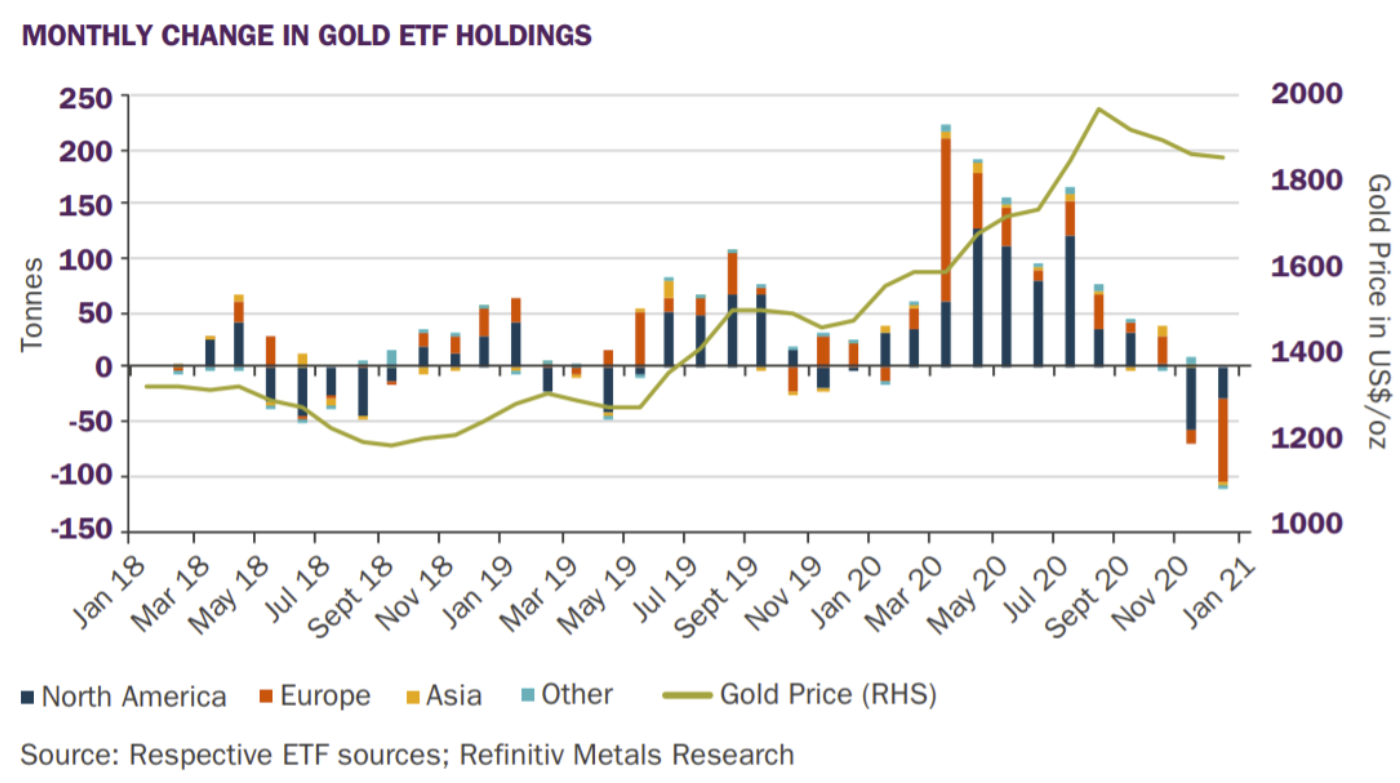 Having said that, the growing optimism around the approval of COVID-19 vaccines and the prospects for a long-awaited return to normal saw some investors reduce their gold exposure towards the end of the year.

After 12 months of uninterrupted gains, gold ETFs experienced selling in the final two months of 2020, equivalent to just under 170 tonnes of gold. Net outflows were driven primarily by selling in Europe and North America, where investors reduced their holdings by 90 tonnes and 86 tonnes, respectively, while holdings in other regions increased slightly, by just under seven tonnes.

Total net inflows for the year were estimated at under 900 tonnes and valued at US$51 billion, which represented the highest ever annual gain recorded since the inception of gold ETFs in 2003 (see article by Graham Tuckwell on the story behind the birth of ETFs on page 21). They were also some 39% higher than the previous yearly record in 2009.

By the end of 2020, global ETF holdings stood at 3,740 tonnes, approximately US$213 billion in assets under management, and while down from the record level seen in November, they were still over 30% above the end of 2019 level.

It is likely that strong inflows into gold ETFs will continue, particularly if the road to economic recovery and return to normality turn out to be bumpy.

While global ETF holdings are very likely to reach a fresh high at some point this year, we may not witness the same level of annual net inflows as last year.

Gold buying activity by central banks slowed in 2020, with annual net purchases falling to an estimated 290 tonnes, half the level registered in the prior year and the lowest since 2016. This was not only a reflection of reduced gross purchases, which were estimated at 35% below the level seen in 2019, but also of a spike in gross sales by 45% year-on-year. It is also worth adding that central banks shifted to net sellers in the third quarter of 2020 for the first time in nearly a decade, having sold an estimated 13 tonnes of gold.

The increase in selling was driven partly by growing pressures to raise capital in order to mitigate the economic damage inflicted by COVID 19, with some countries also exploiting gold’s astonishing price rally and the record highs seen last year.

Total gross sales in 2020 are estimated at 169 tonnes, representing an increase of 45% from a year ago. This was led by Sri Lanka, which reported a net reduction of 12.9 tonnes, a significant uptick from a minimal change in gold reserves recorded in the prior year, placing the country as the largest gold seller for 2020. Another meaningful reduction was recorded by Mongolia, which reported net sales for three consecutive quarters, totalling 12.5 tonnes for the full year. Uzbekistan secured third place, having sold over 11 tonnes of gold over the course of the year, with the bulk of the selling taking place in July and August, when the central bank sold over 40 tonnes of gold at the price peak to raise additional capital to counter the pandemic’s economic impact. The selling was partly offset by purchases later in the year. Among other countries, Colombia reported a drop of 9.7 tonnes in its gold holdings, becoming the fourth-largest gold seller last year.

Meanwhile, gross purchases in 2020 declined by more than a third, to an estimated 458 tonnes. The decline was driven largely by the absence of reported buying activity from the two big players, Russia and China. The Central Bank of Russia suspended its gold purchases from April 2020, having bought 28 tonnes in the first quarter. This represented a marked drop from an annual average of over 200 tonnes acquired in the previous five years, pushing the country to fourth place last year, compared to second place in 2019 and top position in previous years.

In addition, last year witnessed a slowdown in the level of buying from some of the other traditional gold buyers such as Kazakhstan. 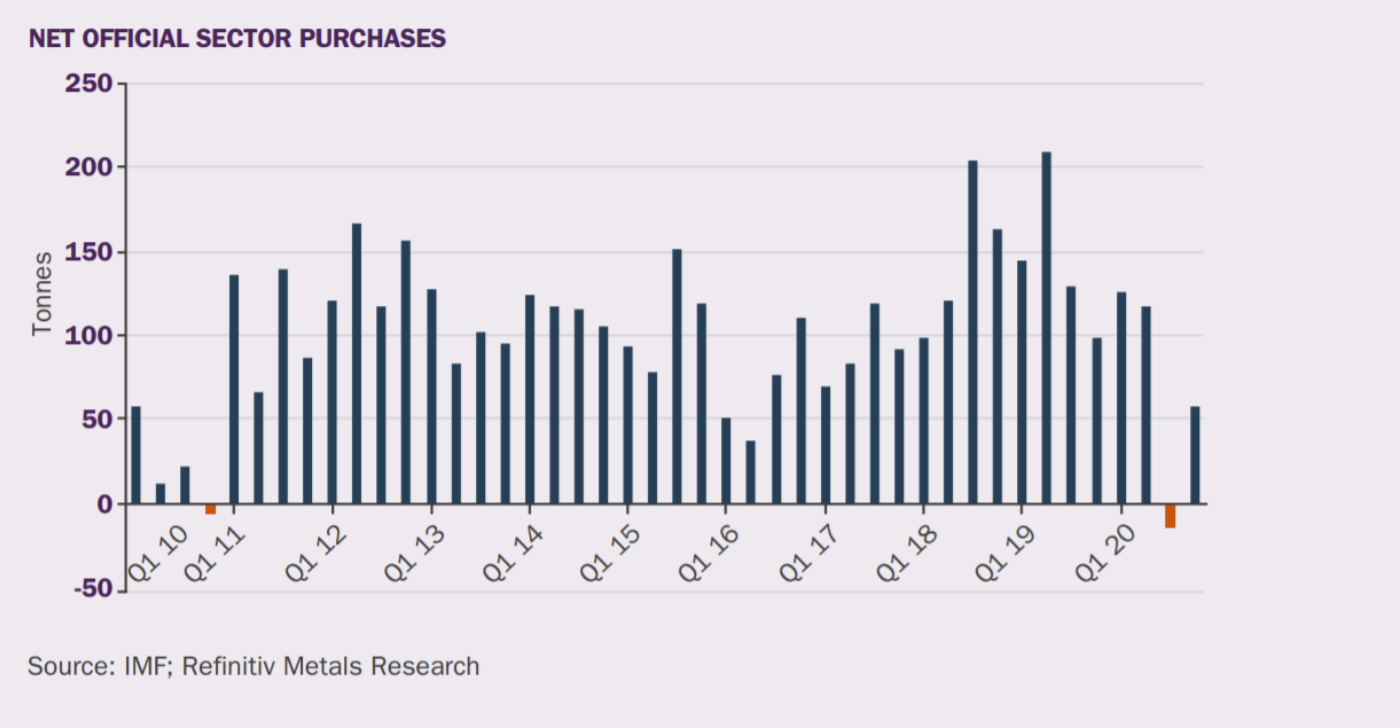 The country reported selling in the first half of 2020, which was offset largely by a pick-up in buying later in the year, resulting in an almost unchanged level of gold reserves by year-end, as opposed to a net increase of 35 tonnes reported in 2019.

Meanwhile, Turkey recorded net selling in the second half of 2020, although strong buying in the first six months resulted in a net annual increase of an estimated 142 tonnes, down by 11% year-on-year. Despite the annual drop, the country retained its status as the largest gold buyer for the second year in a row. India reported an increase of nearly 38 tonnes, making it the second-largest buyer of gold in 2020, followed by the United Arab Emirates (UAE), which added nearly 29 tonnes of gold, almost double the level of purchases declared in the prior year.

Looking ahead, we may see gross sales remain elevated in the coming months, particularly as nations continue the battle against COVID-19 and should the gold price embark upon a new rally to reach and move beyond previous highs. That said, as economies continue to re-emerge from the COVID-19 crisis, we expect central bank gold purchases to remain strong. The overall macroeconomic environment will remain supportive of gold, with economic and political uncertainties still heightened and interest rates staying depressed for the foreseeable future. Meanwhile, anticipated fiscal stimulus to revive the global economy will continue to support a strong case for central banks, particularly in emerging economies, to diversify their international reserves away from the US dollar, in favour of gold. 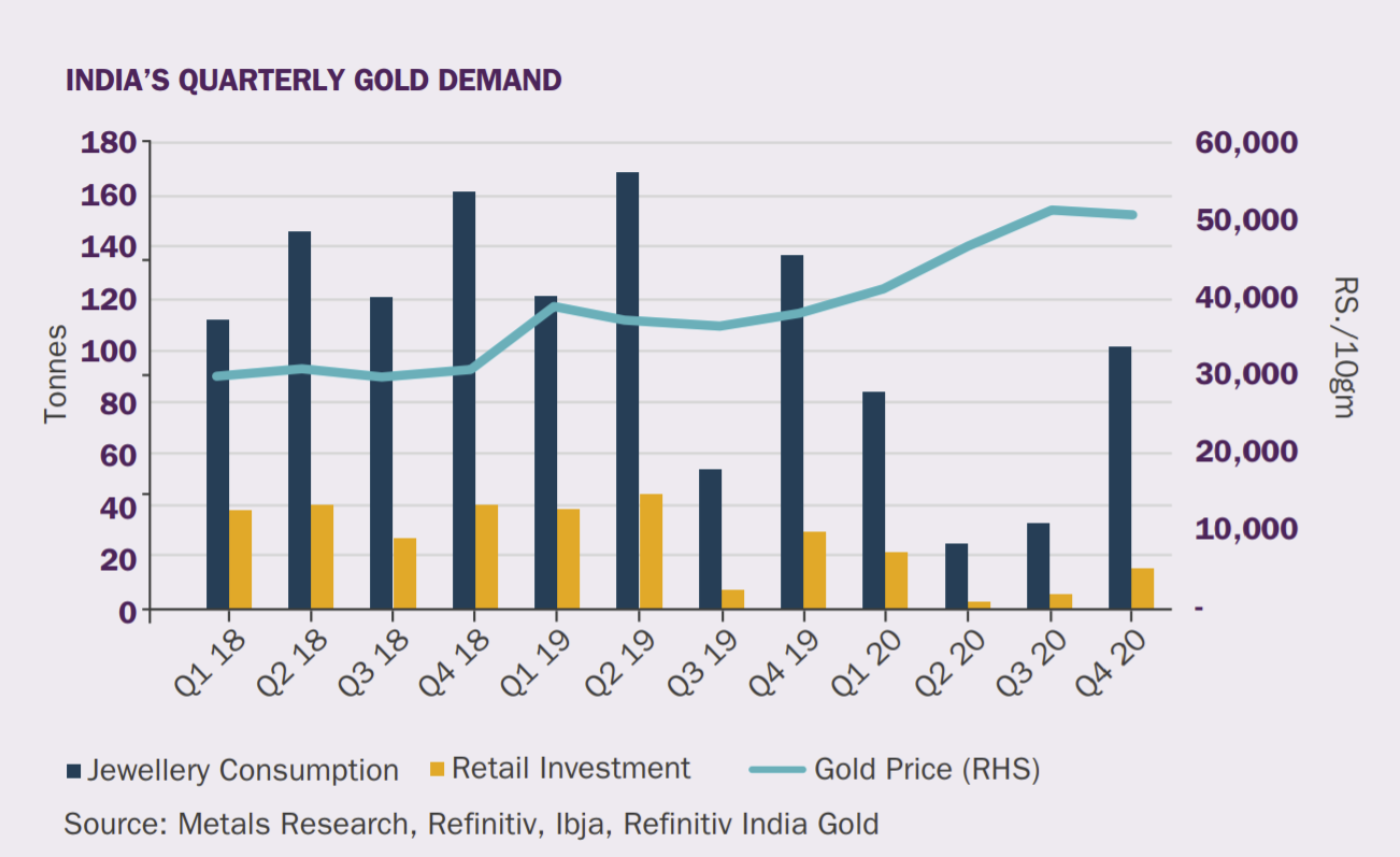 The Indian gold market witnessed its weakest year in decades. Gold imports slumped to their lowest point due to the pandemic-induced lockdown, which forced economic activities to halt completely. The all-time high price was another reason. The gold sector had already been struggling for several quarters due to the slowing economic activity and a shortage of liquidity for jewellers, while the pandemic added further woes. India imported 322 tonnes of gold in 2020, a drop of 53% year-on-year. Out of total imports, 189 tonnes remained available for domestic consumption.

Meanwhile, scrap supply remained muted for most of the year and even after the lockdown was lifted. It had been observed that people were reluctant to enter jewellery shops out of fear of infection.

At the same time, the stimulus package given to the poor by the government provided some cushion, at least in the immediate term, mitigating the need to liquidate savings in the form of gold, suggesting that there was very minimal level of distress selling observed. That said, scrap supply increased in the last quarter of the year, especially in the form of old jewellery used to make new pieces.

On the other hand, the gold loan book of the banks and non-banking financial corporations (NBFCs) increased in 2020. With a mammoth gain in the gold price in local currency terms, the loan to value (LTV) ratio had increased for a person or entity intending to take a gold loan. Some NBFCs offer digital services to provide access to gold loans, making it fast and user friendly. India’s large unorganised section of the economy cannot access formal credit channels and, therefore, faces tremendous liquidity problems, making gold loans the easiest way to boost liquidity and to inject much needed cashflow into the business.

Indian gold jewellery consumption in 2020 is estimated at just 243 tonnes, half of the level seen in 2019. The bulk of the damage took place in the second quarter as the country bunkered down in an effort to control the spread of COVID-19, putting enormous pressure on the jewellery sector.

While large fabrication houses in the organised part of the sector recorded a modest uptick in production (while working at a markedly reduced capacity) in the third quarter, manufacturing activities in the unorganised jewellery segment came to a near standstill. The large unorganised sector recovered some lost ground in the last quarter as the overall demand increased due to the marriage and festival season. However, this segment has continued to struggle and, in our understanding, 2021 is expected to be another difficult year.

The average gold price in local terms remained 26% higher year-on-year in 2020. The largest demand segment for gold jewellery is for the purpose of marriage. In normal conditions, jewellers get some floating customers who purchase little bits of jewellery for daily wear. This segment is very price sensitive, especially where the younger generation Indians are concerned. We believe the high price will continue to impact the demand.

WE BELIEVE THE HIGH PRICE WILL CONTINUE TO IMPACT THE DEMAND

On the investment side, demand for physical gold was hit hard last year, tumbling by 62% year-on-year, to an estimated 46 tonnes.

That said, there had been a shift away from physical gold investment in favour of paper products. As per the data published by the Reserve Bank of India (RBI), 28 tonnes of gold were added so far in the current fiscal year (2020-21) in the form of sovereign gold bonds (SGB), making it the highest addition in a single fiscal year since the scheme was first introduced in 2015, and bringing the total outstanding gold bonds to just under 59 tonnes.

Similarly, Indian ETFs added 15 tonnes of gold in 2020, double the level seen in the previous year, making it a fabulous year for paper gold products. We expect the trend to continue.

Debajit Saha is a Lead Analyst at Refinitiv, based in Mumbai. He is responsible for precious metals research in Indian Sub-continent, Middle East region. He has a Bachelor’s degree from the University of North Bengal, India.