Lifting the Lid on the Birth of the Gold ETF 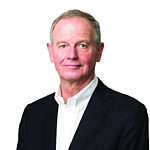 As one of the key pioneers of the gold ETF industry, the Alchemist invited Graham Tuckwell to write this article. In the 25 years since the Alchemist started, it is gold ETFs that have had one of the biggest impacts on the industry.

Up until now, there have been only five major articles1 in the Alchemist that have discussed gold ETFs. Three of them (see Alchemist 48, 51 and 70) were written by colleagues who worked for me and two of them (see Alchemist 64 (in part) and 98) were written by people I had discussions with when developing the gold ETF. All of those articles have either educated readers on what gold ETFs are or have done, but none of them has ever revealed the story behind how and why the gold ETF came about and the obstacles that had to be overcome to get there. This article reveals what really happened.

Back in 1995, when the Alchemist was first published, the gold price was in steady decline from its peak in 1980, so investors who wanted exposure to the gold price bought shares in gold miners rather than physical gold. This gave them ‘leverage’ to the gold price, so shares were viewed as attractive and traded at high price to earnings multiples. In contrast, physical gold had a bad name – it had previously been confiscated by governments, attracted sales tax or was a prohibited investment for most fund managers. Also, the gold price was being weakened by central bank selling and producer hedging. There was little investor interest in physical gold.

The outlook for gold investment began to improve in the new decade, when central bank selling stopped, gold producer hedging stopped/was unwound and VAT was removed on physical gold purchases. The gold price began to rise in February 2001, from a low of just over $250, and the conditions were ripe for a long-term upward trend in gold.

I became intrigued by the idea of listing gold on the stock exchange in August 2002, when I was at a meeting with the Australian Gold Council and the Australian Stock Exchange, where the idea was first raised. It was a great idea, but no one was willing to fund it – so I offered to on the basis that I would be the one to build and own the product. But the build was fraught with complexity.

Stock exchanges were set up to trade equities and bonds, and gold was neither, so we had to come up with an idea that allowed gold to fit within the existing listing rules. With the help of a great lawyer, Bill Fuggle, we came up with the idea of listing a nominal value share which had attached to it an interest in physical gold. One hurdle overcome.

Stock exchanges were set up to trade equities and bonds, and gold was neither, so we had to come up with an idea that allowed Gold to fit within the existing listing rules.

Next, we needed access to the London inter-bank gold market, as investors knew that is where most of the world’s physical gold bars were traded and held. We were keen, of course, to adopt the LBMA standards. There were only two banks that had their own gold vaults in London and one of them was HSBC. That is when I was introduced to Jeremy Charles, who ran HSBC’s gold business, and fortunately we hit it off from the outset. To make the product work, we needed to link trades in equities in Australia with trades in the London gold market, and those two systems were a world apart, literally. Jeremy and his colleague Tony Dean were patient with us as we created a way of joining the two markets together, as well as the first blue-print for the mechanics of a gold ETF using LBMA gold. That blue-print was subsequently used to launch the first London gold ETF (GBS) and the first US gold ETF (GLD).

But there were still more hurdles to overcome. The Australian Gold Council refused to support the product launch, but when I asked the World Gold Council, it agreed to – the WGC’s new CEO, Jim Burton, was keen on the idea of a gold ETF and wanted to help out. I discovered later that the WGC had been thinking of the idea of a gold ETF for some time, instigated by the brilliant Pierre Lassonde, who was very modest when he said in Alchemist 64 that he “had a bit of a hand in its [the GLD] creation”. I believe within the WGC, it was his idea and his vision that enabled the WGC to own what has become the world’s most successful gold ETF.

When the first gold ETF became available in March 2003, it was a good time to start marketing gold as it had risen steadily from $250 to $350 and we said it could go a lot higher – and luckily we were so right, with gold going all the way up to $1,900 over the next eight years. Issuers and investors jumped on the gold ETF bandwagon.

At launch, one could say that the product was only half built, as we had no market-makers and no marketing. I had not heard of those things! The market-making involved me buying a gold bar and giving it to a guy who traded gold futures and equities, who in turn used that gold bar as inventory to create new securities and used futures to hedge this inventory. Once we sold the first 400 ounces of securities, we had to go buy another gold bar and so on, until we recruited a bank to be a proper market-maker!

The final hurdle was getting the product accepted and growing, and that required marketing. We had only $3 million in AUM when Graham Birch (who ran the world’s leading gold fund) agreed to support the idea of a gold ETF, as he said it would be good for the gold industry, and he generously put in an order for $20 million of GOLD. That changed everything and, with that, the first gold ETF was off and running.

THE LAUNCH OF GBS AND GLD

Gold ETFs still needed to be launched in the world’s main markets, so the WGC asked me to work with it to get one listed in London. I also offered to help in the US (the GLD), but they said the expenses were going to be large and it would take a long time. As Pierre Lassonde said (see Alchemist 64, November 2011, ‘What a Difference 10 Years Can Make’), it took two and a half years and $15 million, which was way out of my league! So I worked with the WGC on getting GBS in London launched and we managed to do that in pretty quick time, copying most of the documentation used for GOLD. We listed on the LSE in December 2003 and soon had $500 million in AUM, so all was looking good until something happened.

Some Alchemist readers might remember that the original GBS was pulled within a few months of being launched and replaced by the existing product, which
shows a launch date of March 2003. Here is what happened. The London Stock Exchange rules did not permit nominal value shares to be listed (the structure used for the ASX product), but it did permit nominal value bonds to be listed, so that was the change we made for the GBS. The structure was approved by the legal team at the LSE, but the head of that team was away when the approval was granted. When he came back to work in early 2003, his opinion was that our structure was illegal! Thankfully, he suggested that we work together to sort out a new structure and that is what we did. The final hurdle was having to redeem all the exiting GBS but not being allowed to market the new GBS to exiting investors – they had to find out about it themselves! Most of them did and all’s well that ends well. 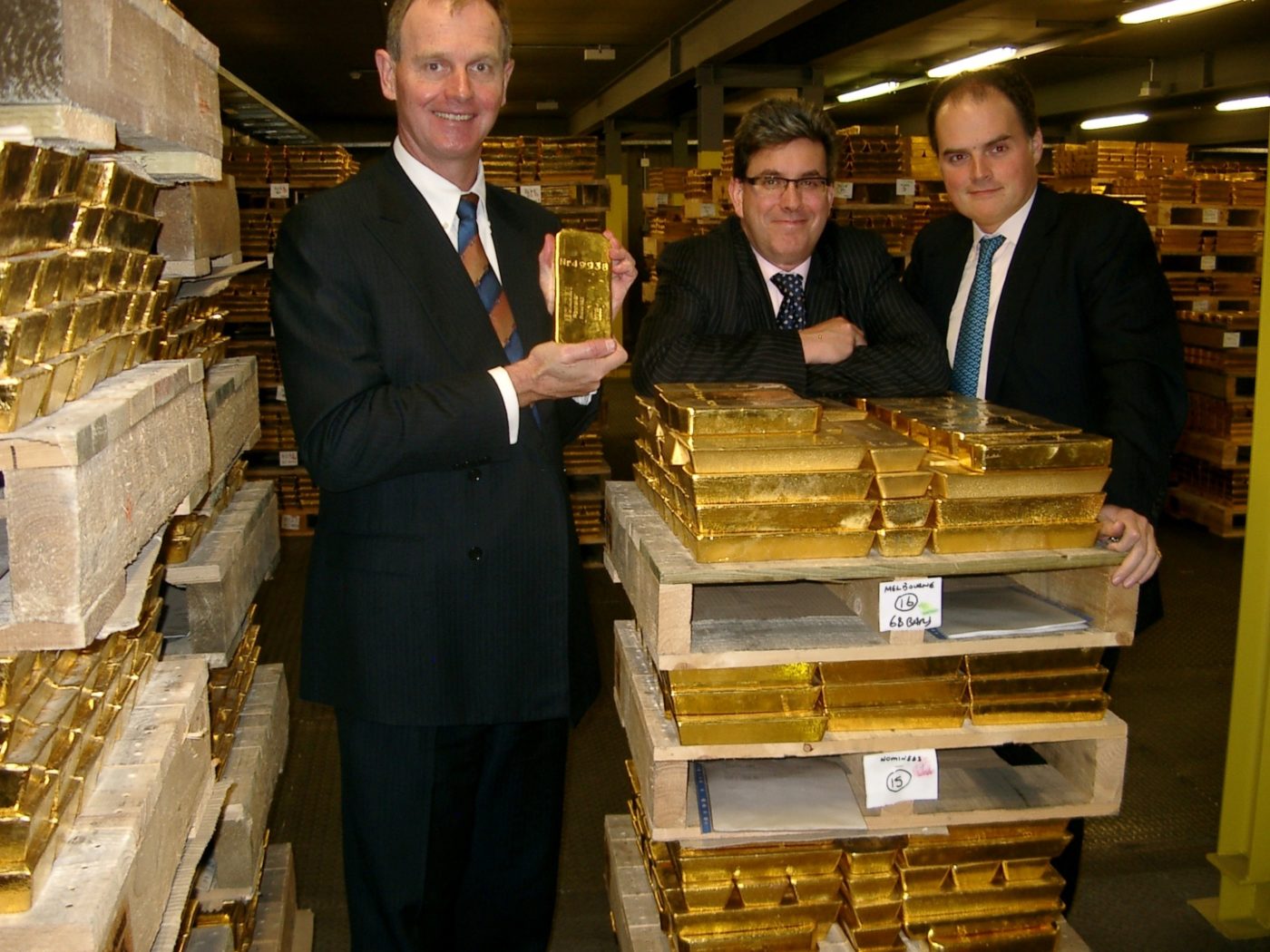 Left to right, Graham with Graham Birch and Evy Hambros

As for the hurdles that had to be overcome in getting GLD listed, I will leave that story to Jim Burton and Stewart Thomas, who worked tirelessly for the WGC for years to get it done, noting that GOLD and GBS were already up and running. My suspicion is that without the help of Pierre Lassonde and Jim Burton at the WGC, it could have been some time before gold ETFs became available to investors and that would have been a lost opportunity. Gold ETFs are now well known and understood, and are a major of gold, as John Reade explained in a recent Alchemist article (see Alchemist 98, August 2020, ‘The Extraordinary Rise of ETF Holdings in 2020’).

Looking back, gold ETFs have received little coverage in the Alchemist. The first article did not appear until 2007, by which time gold had risen to $750 and there was already $20 billion invested in gold ETFs. At ETF Securities, we felt that many people still had not heard of gold ETFs, so we had Nik Bienkowski write an article introducing gold ETFs (see Alchemist 48, October 2007, ‘Led by Gold, ETCs Opened the World of Commodities to Investors’) as a good way of getting the news out to LBMA members.

It was followed up by an article the following year by another of my colleagues at ETF Securities, Nicholas Brooks, explaining that gold ETFs had gone mainstream (see Alchemist 51, August 2008, ‘Commodity Investing goes Mainstream’).

People only invest in gold ETFs if they know about them, understand how they work and understand the benefits of them compared to other ways of investing in gold. This required the ETF industry (and the WGC) to educate the market from the ground up and to cover a broad range of market and industry players. That education process has been ongoing since the first gold ETF was launched and continues to this day. More and more people have now heard about gold ETFs and more people now invest in them, and it is probably fair to say that the industry has reached some sort of steady state where most of the market now knows about them.

Part of my brief was to opine on what lies ahead. I can only answer that by reflecting on responses I have received from gold ETF investors over the years and feedback I have received on possible Bitcoin ETFs (which I have been involved in). So here goes:

ARE GOLD AND BITCOIN SIMILAR?

Yes, in some ways. They have a near fixed supply, earn no return, are cheap to hold and are not fiat currencies.

Yes. They are coming from opposite ends of the spectrum and there will be some convergence and overlapping.

WILL BITCOIN REPLACE GOLD AS A SAFE-HAVEN INVESTMENT?

No. Institutional investors have always wanted allocated gold in their ETFs as it is more secure and they want to be able to see it is there in the vault. It cannot just be wiped out on a computer screen.

WILL BOTH GOLD AND BITCOIN BE SOUGHT AFTER?

Yes, whilst yields remain low to negative and, better still, if interest rates rise and bond prices fall. Maybe a bet on both gold and Bitcoin will work, but for security, a gold ETF for me please.

Graham Tuckwell is an ETF industry pioneer who invented Exchange Traded Commodities, starting with the world’s first gold ETF in 2003. He founded ETF Securities Limited with zero assets and built it into a US$35 billion global firm, selling the businesses in 2018. The company was renamed ETFS Capital and now invests the proceeds in start-ups in the ETF-ecosphere. He began his career in investment banking before starting his own corporate advisory firm specialising in the resources industry. He has degrees in Economics/Econometrics and Law from the Australian National University