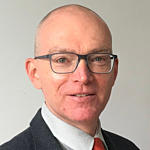 Adrian takes a peak under the covers at some of the more controversial and colourful articles or features that have appeared in the Alchemist over the last 25 years. Far from a parish magazine, these pages have hosted argument and controversy, both from within and outside LBMA’s membership.

“They even call their magazine the ‘Alchemist’. Brazen!” joked one self-declared goldbug on social media back in 2018 of the Association’s long-running quarterly.

But the idea that bullion banking and finance might not always be an unalloyed good for our market was hardly new to LBMA readers. The Alchemist has also since its launch offered “a forum for diverse views” as then Chairman Alan Baker said in his review of its very earliest editions (Alchemist 4, June 1996, ‘One Year On’).

Over a decade later, for instance, Albert Cheng (then Managing Director, Far East at the World Gold Council) and the late D.R. Pendse (then writing from Mumbai’s Centre for Economic Policy Advice) both wrote in to take issue with Philip Klapwijk’s forecast that China was on the verge of overtaking India in both domestic gold demand and jewellery fabrication (Alchemist 58, April 2010, ‘Letters to the Editor’).

Whoever was right (GFMS’s forecast was three years early), “Let us not just discuss the [Asian] opportunity once again, agree about the lucrative prospects and then choose to do nothing,” sighed Tim Wilson of J.P. Morgan about whether or how to engage with gold’s emerging giants (Alchemist 59, July 2010, ‘Once More unto the Breach, Dear Friends’). “An Asia initiative should be an agenda item on every LBMA committee,” he urged, “to ensure we capitalise on our position, and derive maximum value for our members as well as [for] the growing number of participants in the global bullion market.”

It took almost another decade to get Jeremy East as LBMA’s dedicated Far East consultant (Alchemist 90, July 2018, ‘Our Man in Hong Kong’), but the intervening years delivered a host of initiatives, plus forums and also an increasing focus in the Alchemist on the Asian bullion markets, not least the vexed question of China’s “true” size in gold. “It is important that we understand what is going on in China,” wrote Jeremy East not too long after Tim Wilson’s call (Alchemist 75, October 2014, ‘Precious Metals International Context’) “because it is having an impact” worldwide. Put another way, as analysis from Neil Meader of Metals Focus then found (Alchemist 83, October 2016, ‘Links between the Chinese and International Gold Prices’), “US monetary policy and nagging tail risks continue to take centre stage, [but] gold’s fundamentals, among them Chinese demand, [are far from] irrelevant to gold price moves."

The mystery of China’s true pull on global gold supplies was resolved (or very nearly) with the release “at last” of official LBMA trade data, crunched by Matthew Turner against his own previous analysis (Alchemist 93, April 2019, ‘China’s Golden Appetite’). Contrary to what the bug-o-sphere of amateur Sinologists might have wished, the new data did “not mean a radical shift in how we view the [Chinese] market”. Yet, despite London’s clear and continued lead in global bullion flows, the Alchemist has stayed shy if not embarrassed about its dominance, rarely noting let alone stressing it – a hangover, perhaps, from the magazine’s earliest disclosures.

“For those of you who came to see ‘a market showing its underwear in public’ as one analyst suggested, I’m afraid I have to disappoint you,” said Alan Baker, on revealing clearing statistics to the media for the first time almost a quarter of a century ago (see photograph on page 29 and also Alchemist 7, April 1997 'London is the Gold Capital of the World'). That now unnamed analyst’s accusation stung because “The bullion market is often criticised by observers for being secretive and lacking in information and data...[but] discretion and integrity will always be bywords in the London bullion market,” as he had explained to the 35 assembled journalists, not least because so many of the market’s central bank clients were then eager to sell part of their gold reserves on the quiet, “contributing so much to the instability of the price of gold” as N M Rothschild’s Robert Guy would say the following year (quoted in Alchemist 10, February 1998). 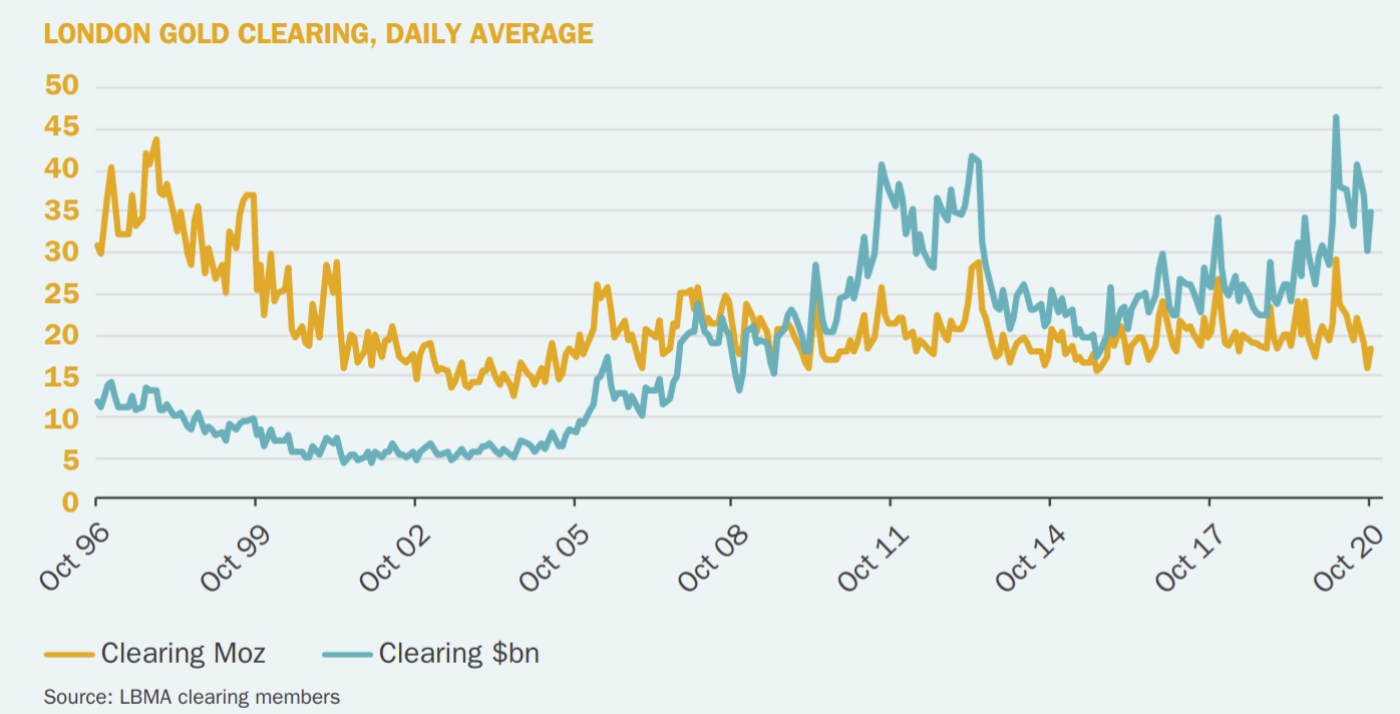 Nevertheless, “the LBMA [was] conscious of the general call for greater transparency” and that journey continues here in 2021, a direction of travel rather than a destination, as neatly summed up by the front-page headline of that edition dedicated 24 years ago to the Association’s first great revelations (Alchemist 6, January 1997, ‘Towards Transparency’).

“Many people will be very startled to discover that the global bullion market is very big indeed,” said the Financial Times of those figures, and “London is gold capital of the world,” said The Guardian.

Such surprise still makes headlines today, despite nearly a quarter century of ever greater transparency. The physical flows alone startled Sky News in 2017, for instance, because the monthly tonnage into and out of London can influence the UK’s headline import and export data as a whole, a controversy The Times then picked up again in late 2019, prompting a detailed explanation in LBMA’s quarterly magazine from the Office for National Statistics (Alchemist 97, May 2020, ‘The Treatment of Gold in Official UK Trade Statistics’).

The real shocker, however, remains the trading volumes, now separated from the clearing data and reported alongside the latest London vault holdings data in each quarterly edition of the magazine, as well as monthly online.

JUST A LINK IN THE CHAIN

“Surely the number of times the same metal trades or spawns other trading in different forms must have increased tenfold at a bare minimum.” said John Coley over two decades ago, then recently moved from dealing to logistics, in pointed comments to his friends and colleagues across the industry (Alchemist 14, February 1999, ‘Letters to the Editor’). “The role of the dealer was traditionally justified as a facilitator, someone who could iron out bumps in the supply chain. By contrast, today it is dealers and non-industrial clients like funds who create bumps [for] end-users.”

How to smooth those bumps? “Acquire some first-hand experience,” John Coley advised, urging dealers to go down a gold mine or visit a refinery to see “where difficulties arise in interfacing” with other points on the supply chain, because “dealing”, he concluded, “is still just another link”, a point he would stress again almost 20 years later in his interview with Dr. Michele Blagg for her wonderful ‘Voices of the London bullion market’ project (Alchemist 79, October 2015, ‘From the Rock in the Ground to the Ring on Your Finger’).

Although produced primarily for its membership around the world, the Alchemist has always opened up its pages to external voices and views, whether from speculative traders (see, for instance, asset manager Trevor Steel’s advance notice in Alchemist 31, June 2003, about ‘The Advent of Hedge Funds in the Gold Sector’) through to other global locations promoting their services (Alchemist 91, October 2018, ‘Banque de France and Gold’) or even clients declaring their exit from London (Alchemist 97, May 2020, ‘Central Bank of Hungary: New Golden Age’).

LBMA Press Conference on 29 January, 1997 at which Alan Baker announced the publication of Clearing data. Martin Frankel on the rostrum, to the left Alan Baker partially obscured by the camera with Chris Elston, the first CEO of LBMA in the middle.

Most bluntly, “Wholesale physical markets are broken,” declared an article in Alchemist 80, January 2016, telling the wholesale market that “the tide of technology can’t be rolled back”, sadly, the technology company providing that article shut up shop just eight months later (another article in the same edition looked at three companies “bringing the blockchain to the bullion market”, one of which had already been dissolved, with the other two soon following), but the other tide it warned Alchemist readers about has only continued to roll in – regulation.

ALTHOUGH PRODUCED PRIMARILY FOR ITS MEMBERSHIP AROUND THE WORLD, THE ALCHEMIST HAS ALWAYS OPENED UP ITS PAGES TO EXTERNAL VOICES AND VIEWS.

“Increased regulatory burdens may seem inevitable,” warned Joel Cook, then Global Head of Commodities Compliance at Standard Chartered Bank, following the 2008 global banking crisis (Alchemist 59, July 2010, ‘Why Regulate Precious Metals’).“But it is still worth taking a step back to consider whether regulation, and in particular regulation of precious metals markets, is a good thing.” Such thinking may seem heretical today, but the UK regulator’s “perceived failure to anticipate and prevent the crisis...will be seen in part as a failure of less prescriptive, principles-based regulatory systems,” he predicted. “This may in turn lead to a move toward a more adversarial approach.”

Battle was joined in the Alchemist by Peter Fertig of QCR Quantitative Commodity Research bravely championing the market’s integrity against “a flawed academic research paper” (Alchemist 73, March 2014, ‘Has There Been a Decade of London PM Gold Fixing Manipulation?’).

BACK THEN AS NOW, THE ALCHEMIST PROVIDED A VITAL RESOURCE FOR EVERYONE WORKING IN OR USING OUR MARKET TO STAY ABREAST OF SUCH NEWS, THE BETTER TO ENSURE IT CAN CONTINUE SERVING ITS CUSTOMERS INTO THE FUTURE.

Yet, if regulators must represent an enemy rather than a partner, then the phrase ‘passive-aggressive seems a better description than ‘adversarial’ of their alphabet soup, one which came to the boil long before the BCBS and EBA’s current CRR imposed NSFR on bullion-dealing banks (first explained in Alchemist 75, October 2014), over 20 years ago in fact, when Credit Suisse’s Julian Cathrew unpicked the NGR from net MTM for FIs (Alchemist 18, February 2000).

Back then, as now, the Alchemist provided a vital resource for everyone working in or using our market to stay abreast of such news, the better to ensure it can continue serving its customers into the future. As for attracting and retaining those customers, however, the friendlier arguments in these pages reflect the friendly competition between companies and colleagues across every part of our supply chain. We are each, after all, like the Bank of England in Alchemist 18’s pointed cartoon (February 2000), not long after the UK’s “shock” gold auction news, “Never knowingly undersold”.

Adrian Ash has been studying and writing daily on gold and silver for nearly 20 years. He is Director of Research at BullionVault, the precious-metals market for private investors online and by smartphone.