The rise in unit costs of production and the decline in productivity on South African gold mines have certainly provided reason for serious concern, and the past decade has seen the local industry become the highest average cash cost producer of the major gold producing countries in the world. The comparison between the weighted cost per ounce of gold produced in North America and Australia since 1980 and the same cost in South Africa is shown in the graph on page 13. After the massive cost increases between 1985 and 1988, South African producers managed, for a brief period in the early 1990s, to pull down their costs of production towards non-South African levels of costs. However, recent years have seen the cost gap widen again.

ln the minds of many observers, these high costs have come to be associated irrevocably with the deep level underground nature traded African gold mining, compared with production in other major gold producing countries. Outside of South Africa, a significant percentage of gold is produced from low-cost open cast mining operations with fairly simple metallurgical extraction procedures. Where gold is produced from underground operations outside of South Africa, the depths at which this mining takes place, and the seam widths in such operations, are generally more favourable than the typical circumstances of South African gold mining. Commentators have tended to see in these comparative statistics confirmation of the lack of any future for the South African industry.

We believe that these views on the South African gold mining industry are excessively negative and that fears for its terminal decline are simply wrong. The crisis of costs which has so challenged South African gold mines these past 10 years or more does not arise from any single cause. The major individual problems that the South African industry faces are well understood and there are few producers who do not have initiatives underway to solve these problems.

One of the problems the country faces is a direct consequence of the time that South Africa has been mining gold. Many of the richest and most accessible areas of our ore bodies have been mined over the past 100 years, and there is inevitable grade attrition in the remaining gold reserves.

This does not affect all operations equally. Some mines still have large and rich reserves to sustain them through decades of mining. Other mines have only the remnant s of a depleted ore body in their lease areas and have to mine lower grades, often at considerable distances from the mineshaft. Older operations and those mining lower grade ore contribute substantially to the high average cost of production in South Africa.

Also central to the problem of unit production costs is the large percentage of downtime on South African gold mines. This problem flow s in large part from historical legislation, which forbade mining on Sundays. This heritage has been exacerbated by the promulgation of new public holidays, and by government pressure to reduce total working hours in all industries. The consequence of these circumstances has been that on the basis of an 11-shift fortnight, many gold mines in South Africa have operated for as few as 275 days in a year.

A further inheritance from the past has been the fact that South African gold mine labour at most mines is neither sufficiently trained nor effectively organised for optimal productivity. Legislation from the apartheid era strictly reserved many jobs and skills for whites only, and actively discriminated against the acquisition of mining and technical skills by black employees. This legacy of the apartheid era has left the industry with a mixture of world-class competence in many areas of activity, and great under-utilisation of human talents in others.

On top of these challenges, the international price of gold has triggered a squeeze in profitability on many South African gold mines which has made it difficult for some operations to get to grips with the work needed to solve the problems listed here. This problem is exacerbated by the fact that overall levels of gold price hedging in South Africa are low compared with the levels of price protection undertaken by producers in the other major gold producing countries.

Anglogold is addressing all of these problems, and the results of our operations reflect the success of the initiatives taken. 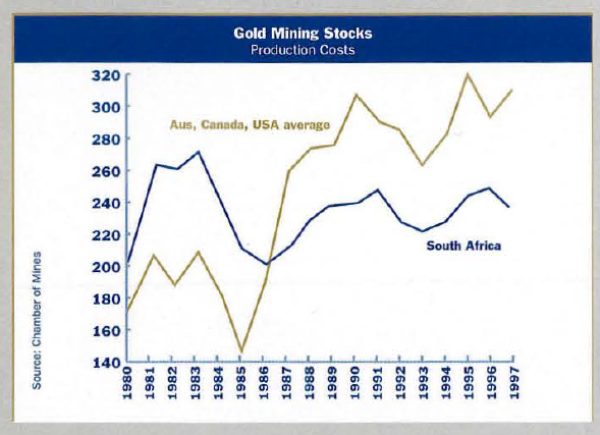 In respect of the problem of ore depletion, continued exploration within existing lease areas and on properties adjacent or close to existing lease areas have identified new prospective reserves. In addition, we have succeeded in swapping parcels of ore reserves with other producers in exchange for reserve contiguous to our mining operations, which have hitherto been sterilised by different ownership. In AngloGold alone we are involved in three major expansion projects at Freegold, at our Vaal River operations (previously Vaal Reefs) and at Western Deep Levels respectively, in which new shafts will access large gold reserves, often at levels deeper than current. In addition to these new projects, a whole new generation of high-grade gold reserves has been delineated between 4,000 metres and 5,000 metres below the surface on the far West Rand, adjacent to Western Deep Levels. The first stages of exploration are already underway to prove up and evaluate these reserves. In the area of unit production costs, our initiatives are already bearing fruit. Escalation in labour costs (which equate to some 50% to 55% of total costs in the industry) has played a substantial part in the negative performance since the 1980s.

To offset this effect, the wage agreement reached in 1997 provided for fixed increases over two years and included the undertaking by trade unions to enter into mine level agreements which would generate productivity increases to offset the sewage cost increases. In the first instance, these mine level agreements have tackled the problem of downtime in the industry. ln Anglogold, the Vaal River operations agreed to a new operating calendar, which adds fully 26 days to the working calendar of mining operations in this area. Similar agreements have been reached at all other Anglogold regions.

On another level, Anglogold has either closed or radically downsized loss-making shafts and business units in order to concentrate productivity effort on maximising the performance of the core and long-life shafts in our company. Using the gold price hedges in place in the company, Anglogold was able to continue to fund restructuring activities throughout 1997.

The problem of inadequate skills and sub-optimal work structures is less amenable to solution by agreements and requires more time and effort to remedy. Nevertheless, in this area, a start has been made. At Elandsrand, all underground production workers have undergone skills retraining and redeployment in teams designed to achieve greater productivity in South African circumstances. Structures of remuneration have been amended appropriately, and the continual improvement in Elandsrand's results over the past two years shows the potential for the South African industry. Similar programmes invoking retraining and redeployment are well underway at other Anglogold operations.

To focus attention and effort on productivity, since the beginning of 1997, Anglogold management has published its productivity target in advance (expressed as volumes of ore broken and gold produced per employee). In 1997, these published targets aimed for average increases of 83% in productivity per employee. Good progress was made during the year and, by the end of the fourth quarter, all of Anglogold 's operations were achieving their targets. For 1998, the average target improvement is a further 23.5%. In broader terms, the company has set cash cost targets for all of its core operations of US $250 per ounce. Several of our operations are well below this production cost already others will reach this target only in the next 18 months. On average, the cash costs for the company for 1998 (excluding retrenchments and extraordinary items) are targeted at US $248 per ounce.

All in all, we believe that Anglogold has gone quite some distance down the road to solving those major problems which have affected underground mining in South Africa so negatively over the past decade. The ongoing management of these problems is now an integral part of the strategic objectives of management on Anglogold operations. Much work remains to be clone in certain areas, and retraining, upgrading skills and reorganising of production labour must be regarded as a task which will continue well beyond the immediate present. However, already the cash operating costs reported by Anglogold compare well with many well-rated, quoted mining companies in North America and Australia. With no debt in our company, total production costs are better than all of the highly-rated North American and Australian producers. Gold mining in South Africa will always be a challenge, but it is by no means an overwhelming challenge. The changes and initiatives undertaken to date show just how much improvement can be achieved in this industry, and with enormous reserves in South Africa at world competitive grades, Anglogold intends to be in the forefront of gold production in South Africa in the decades ahead.

Kelvin Williams joined Anglo American Corporation as a member of the Industrial Relations Department in 1976. Between 1978 and 1985, he worked in the Coal Division with responsibility Jar Jlmcoal's anthracite collieries and, in September 1985, joined the Corporation's Gold and Uranium Division.