The waiting game continues until the details on gold's role within the ECB and ESC B are announced. The 11 countries entering the first phase of European monetary union (the EMU-11) directly hold 9,906 tonnes of gold in Central Bank reserves, representing 26% of the world official sector reserves. In addition, the EMI holds 2,476 tonnes of gold that belong to the 11 countries, representing 20% of their gold reserves. (Similarly, the EMI held 20% of member country US dollar reserves) That brings the total to 12,382 tonnes or 31% of world official reserves. The future of these reserves has been the central issue confronting the gold industry for the past 18 months and is unlikely to remain so for some months yet.

The reserves previously held by the EM! have been transferred to the ECB, to be eventually returned to the national central banks (NCBs) of member states at the end of this year. At that time, the NCBs will make their contributions to the official reserves of the new ECB.

The ECB is the executive arm of the European System of Central Banks (ESCB). In other words, its task is to implement the policies of the ESCB. The ESCB, as the name suggests, consists of the ECB and the NCBs of the member states. Policy will be set by the Governing Council of the ESCB which, for the initial phase of EMU, will have 17 members - the six executive board members of the ECB, plus the governors of each of the 11 NC Bs.

The nature and structure of the ESCB and its Governing Council is an important factor for the gold market. According to the Maastricht Treaty, one of the four main tasks of the ESCB is "to hold and manage all of the reserves within the system". Effectively, the ECB and the NCBs should begin to behave as a single entity with regard to not just monetary and exchange rate policy, but also the reserve base. (Indeed, this is the whole idea of monetary union.)There has been much speculation that once monetary union begins, the NCBs will be unable to sell (or buy) gold reserves without the permission of the ECB. However, the Maastricht Treaty is not entirely clear on this subject: 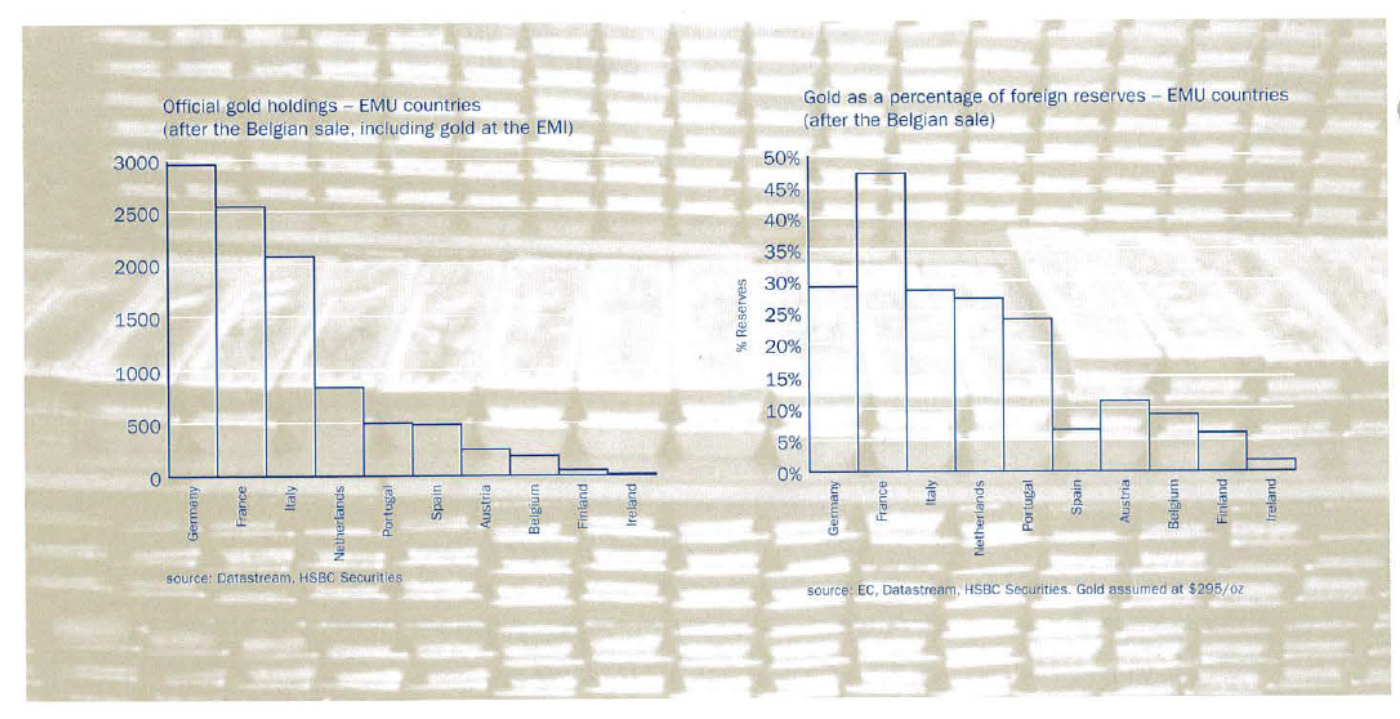 The ECB and national central banks may acquire and sell spot or forward all types of foreign exchange assets and precious metals; the term 'foreign exchange asset' shall include securities and all other assets in the currency of any country or units of account in whatever form held.

The NCBs shall be allowed to perform transactions in fulfilment of their obligations towards international organisations.

All other operations in foreign reserve assets remaining with the NCBs after the transfers (to the ECB) and member states' transactions with their foreign exchange working balances shall, above a certain limit to be established with.in the framework of article 31.3, be subject to approval by the ECB in order to ensure consistency with the exchange rate and monetary policies of the Community.

The Governing Council shall issue guidelines with a view to facilitating such operations. 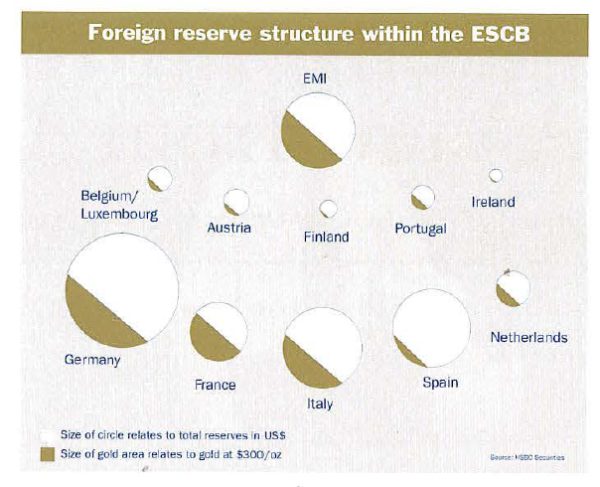 The key phrase is "consistency with the exchange rate and monetary policies of the Community ". It is by no means clear how this will be interpreted. The ESCB could take the view that all transactions in foreign reserve assets have the potential to impact the exchange rate policy. Or it could take a considerably more liberal view, restricting its control to only the largest NCB reserve transactions. In the longer term, we suspect that control will be drawn to the centre, but for the initial guidelines, we must wait for the ECB announcements.

The other key announcements, from the point of view of the gold market, will be:

Further calls of foreign reserve assets beyond the limit set in Article 30.1 may be affected by the ECB within the limit s and under the conditions set by the Council.

The Governing Council shall adopt the guidelines and take the decisions necessary to ensure the performance of the tasks entrusted to the ESCB under this treaty and this statute. The Governing Council shall formulate the monetary policy of the Community including, as appropriate, decisions relating to intermediate monetary objectives, key interest rates and the supply of reserves in the ESCB and shall establish the necessary guidelines for their implementation.

To the extent deemed possible and appropriate and without prejudice to the provisions of this article, the ECB shall have recourse to national central banks to carry out operations which form part of the task of the ESCB.

The ESCB and ECB were formally established on 1 Jun e 1998, but will not assume their full powers until 1 January 1999. Announcements could come at any time up to that date, although it is likely that the framework will have to be set down insufficient time for the necessary operating procedures and systems to be put in place'.

It is unlikely that the gold-related issues will be high on the priority list. The prime aim of the ESCB is to maintain price stability within the EMU zone. This needs to be defined and agreed. Other issues that need to be addressed include the exchange rate policies, monetary policies and the payments system for the Eurozone. It could easily be August or September before the gold market 's ECB guessing game is over.

Doug Upton is head of Commodity Research with HSBC Securities. He is responsible for research and forecasting of mining-related commodity markets.

Prior to joining HSBC in 1997, Doug served for many years in the mining industry. He spent more than eight years with WMC Limited working in a range of capacities, including financial analysis, acquisitions and divestments, operational and strategic planning, marketing and market research, and business development. Sectors covered include base metals, precious metals, steels, industrial minerals, bulk commodities and fertilisers.