Facing up to the Price - A View from Africa

Imagine an industry that enjoys a high price for its output, well in excess of costs of production. Companies operating in this industry find that their shareholders are fairly undemanding, and it is easy to raise equity capital, without having to account too closely for the returns. on that capital. Not surprisingly, a large number of companies flourish in this situation, including a great many small and inefficient producers, since merely being able to produce the product guarantees success.

Not many would identify the above industry as gold mining. But, prior to the crash of the gold price in 1997, gold mining wasn't just a business, it was a 'good business'. That is quite a contrast to the condition of the industry today.

With the gold price at a level that is below the total cost of production for the average player in the industry, companies have to work a lot harder to raise capital. Shareholders are demanding returns on capital that are commensurate with other industries. Only the most profitable companies will survive in this situation. Gold mining has become just a ' business'.

That in itself is not such a bad thing. It is what most companies have to contend with in most industries.

Other industries have suffered major external shocks similar to that in the gold industry. For example, the automobile industry in Europe and North America was a 'good business' with the oil price crisis of 1979. Suddenly, the established producers had to compete with the onslaught of cheap, fuel-efficient Japanese imports. Major players such as Chrysler found themselves marginalised and hovered on the edge of bankruptcy, while Ford and Volkswagen suffered heavy financial losses.

We were confidently told that the automobile industry as we knew it would not survive. And yet, it did. Both Chrysler and Volkswagen restructured themselves successfully, reduced their delivery costs, and arc now achieving superior financial returns for their shareholders. Some of the strategies they used can benefit the gold mining industry as well.

The survivor companies were those who succeeded in reducing their operating costs dramatically. Sweeping lay-offs were made and tough deals were cut with unionised labour which guaranteed a future for both sides. In automobiles, there was a major shrinking of the supply chain, inspired by the Japanese ' just-in­ time' philosophy. Over five years, Ford Motor Company and Volkswagen are reported to have cut the number of their suppliers by over 30%, achieving major improvements in cost, quality and delivery times.

Survival is not only a matter of reducing costs. Successful companies have consolidated their business into large-scale, world-class facilities while closing clown small inefficient units, and selling non-core businesses.

Geographical consolidation can be a significant feature. Chrysler successfully regroup ed around Middle America and sold off its European operations, having decided that being' world-class' did not mean being all over the world.

How can the survivor companies in gold mining apply these lessons? Survival starts with cost reduction and that starts with labour. Our company has reduced its labour force by 10% over the last 12 months while increasing production by 30%. But sweeping lay-offs alone do not create the loyal and productive workforce that is essential to compete efficiently. The last 12 months have seen path-breaking agreements with unionised mining labour; in Ghana in our case, in South Africa in the case of Anglo and others. Ashanti has worked hard to create focused incentive plans, which the Ghana Mineworkers Union has traded off in return for cuts in overtime. By implementing schemes that protect workers' purchasing power, we have escaped from the syndrome of high nominal annual salary increases. A belief in long-term partnership is crucial to achieving such agreements. Ashanti introduced worker directorship s over 15 years ago and we have staff and worker representatives sitting on the division boards for each of our six operating mines. 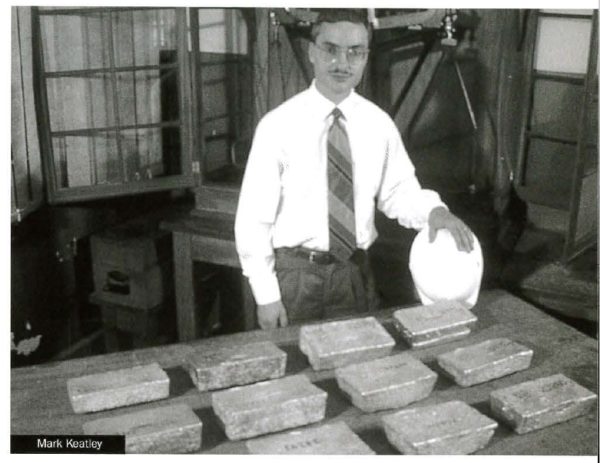 The area where cost reduction has the greatest leverage for Ashanti is in the costs of purchased materials. This is because our production is largely mechanised and purchased materials account for about 55% of our production costs. Again, Uke the automobile industry with its ' just-in-time approach', we are shrinking the supply chain. We would rather deal with fewer world-class suppliers and achieve economies of scale. ln total, we are reducing the number of suppliers that we deal with by 50%, to less than 1,000. For our key mining inputs, we have moved to single sourcing at a country level and, in many cases, at a global level. Overall, we have reduced the unit costs of our purchased materials by 16% in two years. We have also reduced the lead-time for routine supplies by 34%.

As in the automotive industry, the successful companies are consolidating their production around large-scale, world-class mines, while ruthlessly pruning small inefficient units. In many cases, the consolidation is being achieved by merging adjacent properties to create economies of scale. Although there will w1eloubtedly be room for smaller players who hold high-grade properties, the economic factors will mitigate in favour of scale.

There are signs that there may be more geographical consolidation. A driving force in much of last year's merger activity in North America and South Africa was that the dominant players consolidated their presence in their backyard. In Ashanti's case, Africa is the continent that we understand, and where our strategic advantage is greatest; and our current endeavours are directed at consolidating further our presence there.

In conclusion, the current travails of the gold milling industry are not unique. Other industries have withstood and survived external shocks of an equally severe magnitude. Likewise, the solutions are not unique but they require vision, focus and determination. We look forward to that challenge with relish.