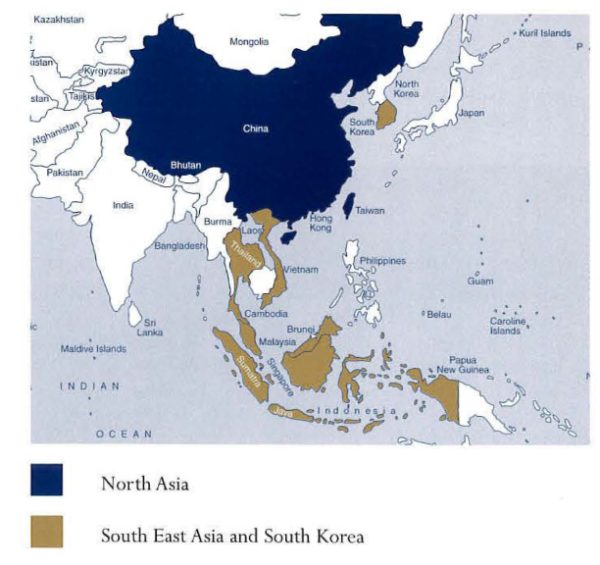 They suddenly began to withdraw funds From Thailand, which had become dependent on capital inflows to fund its trade and current account deficits. The resulting pressure on the currency forced the government to devalue the baht on the 2nd of July. That devaluation became the spark that touched of a severe crisis across a region which had experienced rapid economic growth for an extended period. Asian economies had safely weathered storms such as the 1991/92 recession across Europe and the US as well as the Mexican crisis of 1994. Initially, the Thai difficulties did not cause undue alarm. It was only months later that the world sat up and took notice, as the meltdown continued to grow deeper and more widespread.

The results have been devastating. Local currencies have collapsed, stock markets have crashed, asset prices/values have plummeted and credit has been squeezed. A year later, the end is not in sight.

Among the many casualties has been the region's appetite for gold, which, after recording its strongest year ever in 1997, contracted so sharply at the beginning of 1998 that some countries turned from being key regions of consumption into net suppliers. let is not difficult to see why. Plummeting currencies in several market centres resulted in an explosion in local gold prices, which not only dampened demand but also caused a rush to sell back to the market. 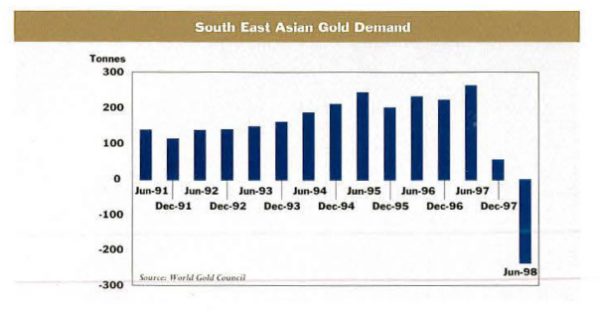 Over the first half of this year, the unprecedented selling resulted in the South East Asian region becoming a net supplier to the rest of the world for the first time in recent history and perhaps for the first time ever. Such sales of gold back to the market, principally in the form of high carat jewellery, have originated mainly from Indonesia, South Korea, Thailand, and Malaysia. Government schemes to collect gold From the public in order to raise foreign currency reserves were widely publicised and, in the case of Sou Li, Korea, hugely successful. Patriotism is not the only force at work, however, as profit-motivated selling has also added to the supply. 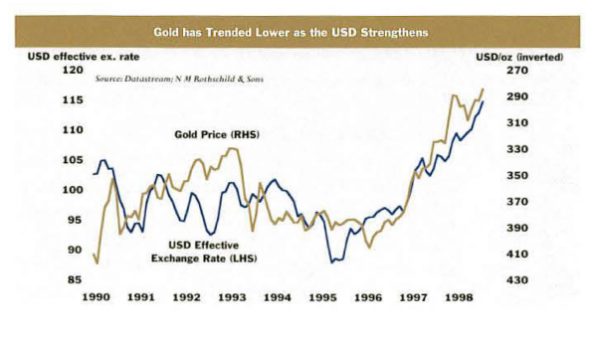 The exact amounts are difficult to gauge. According to the World Gold Council (WGC), South Korea, Indonesia and Thailand collectively sold back 353.5 tonnes over the first six months of this year, with net dis-hoarding (taking into account new demand) from tl1ese three reaching 274 tonnes. Gold Fields Mineral Services (GFMS), however, estimate that scrap flows over the first half out of South Korea and Indonesia alone totalled a massive 437 tonnes.

For the South-East Asian region as a whole, net dis-hoarding reached 235.3 tonnes. The majority of the dis-hoarding reflected the South, Korean governments campaign to collect privately held gold, which netted 243 tonnes, 228 tonnes of which were exported. The Thai government ran a similar scheme starting in early January, but as the Thai economy was hardest hit in late 1997, it came too late to spark u1terest and had to be abandoned.

Although organised government collection schemes finished long ago in March, local gold prices have stayed relatively high, and dis­hoarding has persisted in the form of continued profit-motivated selling. Anecdotal evidence suggests that panic-related selling out of Indonesia, which has had the largest currency depreciation to absorb, has continued. Traders estimate that between 140 and 170 tonnes have been sold back into the market out of Indonesia so far this year. This compares with the conservative WGC estimate that 83 tonnes were dis-hoarded during the first half of the year. 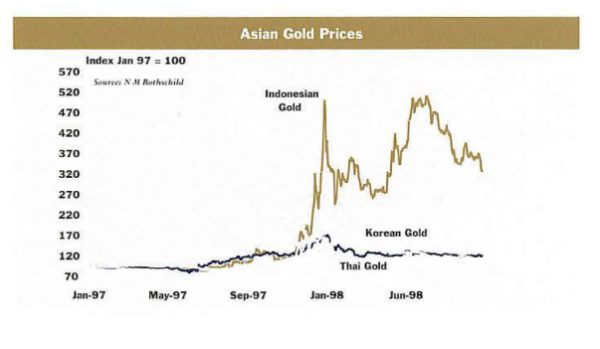 A combination of lower USO prices and good income growth contributed to a surge in new demand last year when demand in the South East Asian region surged over the first half by 13% to a record 263.2 tonnes. Even in the absence of the economic crisis, it would have been difficult for the first half of 1998 to show substantial new demand growth over those extraordinary levels.

Japan said to be oversupplied

As the Yen continues to slide, so does Japanese demand for the yellow metal. According to the Japanese Finance Ministry, gold imports in the first six months of this year plummeted 53.2% to Asian Gold Prices 33. om the same period last year, yet the market is still said to be oversupplied. Since 1981, Japanese imports of gold have been consistently above 100 tonnes. However, 1998 looks set to be the first year imports will fall below that level, as Japanese demand over the first half totalled 45 tonnes, down 33% from the same period last year. 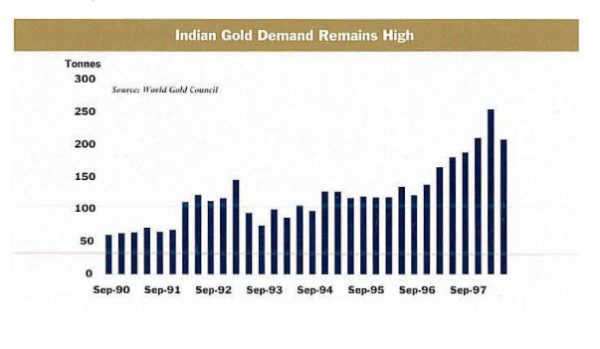 After holding up relatively well over the first quarter, North Asian gold demand fell 23% during the second quarter year-on­-year, mainly due to a sharp drop in demand from Taiwan and Hong Kong. Deteriorating confidence and contracting demand elsewhere in the region finally took their toll in Hong Kong, as first-quarter economic growth fell for the first time since 1985. The jewellery sector was severely hit.

Although Chinese growth has slowed recently, the country has so far avoided most of the problems facing neighbouring countries. The Yuan was devalued by 35% in 1994 and thus has not been as vulnerable to the collapse as its neighbouring currencies. Gold demand, therefore, has remained relatively stable, falling only 7% to 101.6 tonnes according to WGC figures. Recent evidence suggests that a large amount of gold has gone into China as a devaluation hedge, i.e. purchasing gold for the anticipation of a fall in the Yuan. In what was seen as a move to become more competitive in the domestic market, the People's Bank of China lowered its official purchase price on 18th August by 2.92% to 78.15 yuan/g (equivalent to $293/oz)

The risks are low but increasing that the Chinese authorities will devalue the Yuan, forcing a new round of competitive devaluations across the region. Nervous ness over a possible devaluation has recently caused China to tighten controls over outflows of foreign currency. If China does devalue, then we will see a lot of selling of gold back into Hong Kong and far less Chinese and East Asian demand.

The majority of' the dis-hoarded gold has been exported to refineries in Europe and Australia, with some finding its way into Hong Kong. Reflecting the slump in physical gold trade in the region, prices for kilobars in the Tokyo, Singapore and Hong Kong markets collapsed. While historically kilo bars in this region have commanded premiums of around 60 - 80 cents, for most of the past six months, they have traded at flat or even at a discount to the world USD price.

It is indeed remarkable that the gold price has held relatively stable whilst absorbing all this material. Who is doing all the buying - or rather, who else has stopped selling? According to GFMS, 1997 saw a massive increase in liquidity with a record combined contribution to supply f om forward sales, option hedging and implied dis­investment - a total of 773 tonnes. In addition, net official sector sales to ta led 406 tonnes. By contrast, at a recent seminar, GFMS reported only modest increases in producer hedging and net official sector sales during the first half of 1998. With less gold to absorb from the official sector and producers, more room was left for the dis-hoarded Asian gold.

The only bright spot left in the region is India, where demand remains robust and the conclusion of the eleventh successive good monsoon provides a reason for optimism. Deregulatory measures and liberalisation also continue to encourage demand. Over the first quarter, buying for the wedding season pushed demand to a record first quarter of 252.1 tonnes. Despite a fall in the rupee and a rise in customs duty, low USD prices have helped keep local prices around their levels of a year ago heading into the festival season. We, therefore, expect Indian demand to remain relatively healthy this year.

The question preoccupying the gold market is whether the worst of the dis-hoarding is now behind us and demand in the region can begin to recover. Over the short term, the outlook for overall Asian gold demand over the second half of 1998 does not look positive. Many of the ramifications of the turmoil in Asia will take time to work through the system and are only now beginning to be felt. Unemployment will continue to rise as business failures intensify over the remainder of the year. As long as the economic and political situation remains uncertain, gold demand in the region will suffer.

Will demand in India suffer as well? While it is possible that Indian demand will suffer from the effects of a poor harvest next year, another looming concern is the potential for an economic slowdown to impact negatively on incomes. In addition, the threat of currency devaluation also applies to India. The outlook for gold consumption in India remains a key determinant of the outlook for the gold market as a whole.

Longer-term, however, prospects remain auspicious. Gold has proved a good investment, with the dis-hoarding only reinforcing the role of gold as a store of value. Offtake, will rebound once these economies recover. In addition, a slowing LIS economy should see the USD weaken over the next couple of years. This will result in a fall in local gold prices, helping to stimulate demand.