Gold and the Euro

"... a monetary union between sovereign states without disadvantages for one or the other contracting party can only come into existence on the basis of equal solidity of monetary policy in the single states…"

This quotation is, in fact, one hundred years old, and therefore refers not to EMU but to the Latin Monetary Union, involving France, Belgium, Switzerland, Italy and Greece, which lasted from 1865 to 1927. Although Austria was not a member, it led an initiative for the USA to produce gold coins for the union, which led to the minting of a trial coin by the name of Stella, with a face value of $4, which corresponded at the time to 8 Austrian Gulden.

In acting as a hedge, gold has two aspects which are relevant for central banks - against inflation and against currency risks. Those aspects ultimately help determine the possible role of gold for the ECB as well as the possible future gold policy of Oesterreichische Nationalbank ( OeNB, the Austrian Nation Bank).

At first glance, central banks are a sort of strange species with supposed inconsistencies in their decisions concerning gold. However, the sometimes hidden logic behind this has to do with central banks' hierarchy of policy objectives. This involves some rather paradoxical issues.

Gold is broadly considered an asset that is useful as a hedge against inflation as measured by an index of representative goods and services.

In the case of Austria, the index holds more than 700 single items, a mere three or which are directly linked to gold; they account for a total weight in the index of approximately 0.5 %. Therefore, why should a commodity representing the 200th part of an inflation index be considered an adequate hedge against inflation? The answer lies, of course, in the nature of gold compared to that of the other goods and services in the index. Services by their very nature cannot be bought on stock, and the same is true for many commodities, which are not of a durable nature.

But even if these commodities were sufficiently durable, there are good reasons for not keeping them in bigger quantities, even under the assumption of rising inflation. Gold, however, is considered to be a feasible hedge against inflation - not only because of the expectation that it will show a price development highly correlated with the CPI, but also because it is available in any denomination and can be easily exchanged against other commodities if need be.

There is the first paradox: if gold is an adequate hedge against inflation, it might seem strange from an asset allocation point of view that central banks - whose main product is monetary stability, or, in other words, low inflation - should hold a substantial amount of gold in their balance sheets. It would basically mean that central banks that successfully fight inflation suffer losses on, their gold holdings.

However, statistics do not show gold to be a reasonable hedge against inflation unless measured over the very long term – for example, from 1600 onwards in half-century intervals. Under such a (sometimes doubtful) assumption, central banks which have been especially successful in "producing" low inflation might indeed be confronted with valuation losses on their gold holdings. This leads us to paradox number two, namely the fact that while loses on external assets, in general, are harmful for the standing of a financial institution, this is not necessarily, the case for central banks.

If the domestic currency is under strong international demand, it is unavoidable that the market value of the central bank's assets (including gold) will go down. As the historic example of the Bundesbank shows, such losses may occur particularly in times of very high credibility.

Paradox number three concerns the potential stabilising role of gold as a compensatory asset class in central banks' balance sheets. The introduction of the euro reduces the investment universe at the disposal of central banks - not only so far as currencies are concerned, but also in terms of actual investments in different instruments like bonds. This may lead to enhanced importance of gold as an asset class in National Central Banks'( NCB's) balance sheets.

Holding gold in a central bank's balance sheet may also be seen as paying an insurance premium (namely opportunity costs in the form of missed interest income) against a highly improbable risk. From a commercial point of view, this might be considered expensive. However, public confidence in central banks is largely based on the fact that they are not primarily income-driven institutions, but institutions responsible for maintaining confidence and trust in the currency. Therefore, psychology is (and should continue to be) a very important Factor in the holding of gold by central banks. The fact that gold is no one's liability is one of the pillars of public confidence.

When it comes to gold, psychology always matters. Under normal circumstances, individuals only have a choice between consumption and saving. The benefits attached to consumption are (at least partially) offset by setbacks through the concomitant reduction of saving. With gold, it seems that - strangely enough - one can have one's cake and eat it, too, without paying the price. Gold clearly contains elements of saving and, being a commodity, consumption (particularly when it takes the form of coins and the like). This might be one of the explanations for the long-lasting attractiveness of gold. 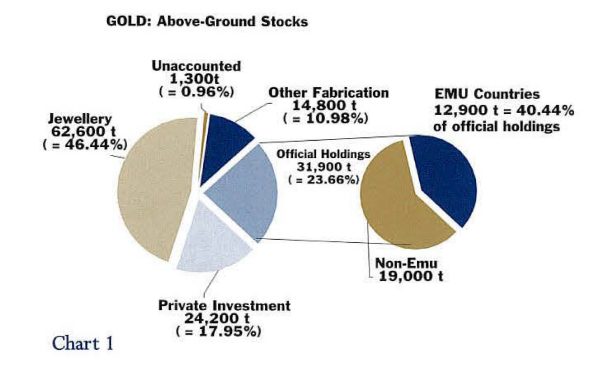 Gold within the European Central Bank

There seems to be a substantial degree of misunderstanding about the character of the ECB's reserves. It should be kept in mind that within the European System of Central Banks (ESCB), the ECB's and the NCBs' reserves have different functions that complement each other under the heading of a uniform foreign exchange and monetary policy.

The external reserves to be transferred from the NCBs to the ECB in an amount of up to EUR 50 billion basically form the ECB's mass for interventions. This, of course, has implications for the composition of' these reserves. As gold can only be used indirectly for intervention purposes, this de facto puts a certain limitation on the share of gold in the ECB's reserves. 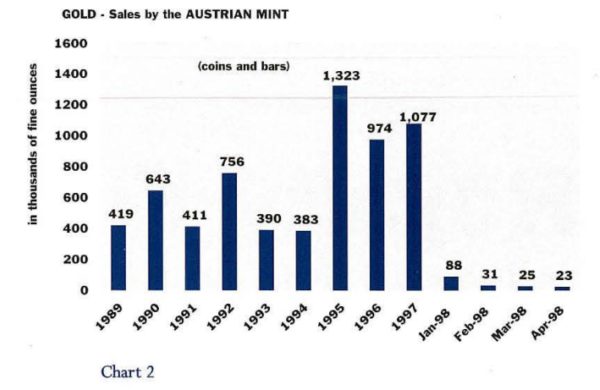 In this light, keeping a relatively small proportion of gold in the balance sheet would be quite natural and should not be misinterpreted as a general aversion of the ECB and the national central banks to gold. This issue should rather be looked at from the perspective of the ESCB as a whole. In this context, I do not share the fears expressed in some recent papers that the NCBs might be induced to sell gold reserves in order to bring them in line with the ECB's gold percentage. Of course, future gold sales by NCBs cannot be excluded, but probably not from taking the share of gold in the reserves transferred to the ECB as a benchmark.

The ESCB overall holds a very substantial part of the world-wide official gold holdings (Chart 1 ). While this gold no longer plays a monetary role in the historic sense, by its very nature (being no one's liability) it is still a very useful asset to cover parts of the circulating central bank money. The importance of gold for the system is underlined by the envisaged prior approval system of the ECB. Operations by NCBs involving gold - not only purchases and sales but also gold/USO swaps - could be subject to the ECB's prior approval above a certain threshold. Thus, the ECB's actual approval policy might exert a potentially strong influence on the gold market. In exercising this power, the ECB will take all relevant factors into account, but the fact remains that the monetary unification of some of the world's biggest gold holders is a highly relevant system change. Of course, future gold sales cannot be excluded, but one should bear in mind that numerous portfolio adaptations have already taken place in recent years. 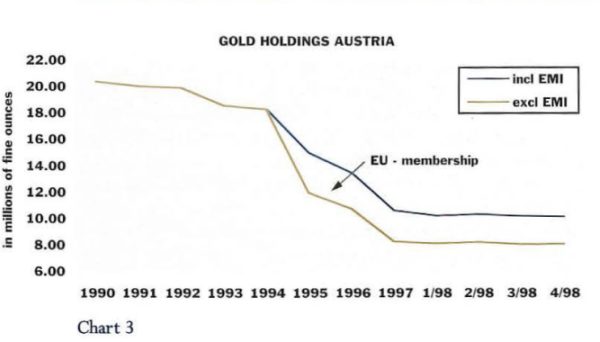 The OeNB, like other NCBs, has already started to reconsider its portfolio management priorities. Instead of the traditional hierarchy of investment objectives as security - liquidity - profitability, a new hierarchy giving more weight to profitability can be envisaged. Until now, as the central bank of a small economy, the OeNB has had to be permanently ready to intervene in order to stabilise the exchange rate of the ATS versus the OEM. However, in the new environment, there will no longer be an external exchange rate target. The monetary policy relevance of a country like Austria will be more or less nothing but a regional statistical event.

This might lead to some changes in the area of gold. NCB's might consider longer-term engagements to be appropriate Corms of investment, meaning greater importance could be placed on the quality of our respective counterparts for gold/dollar swaps or gold deposits. The new Austrian National Bank Act has added both gold deposits and derivative instruments to our spectrum of eligible instruments From 1 May of this year.

The OeNB is quite confident that it will be possible to maintain successful co-operation between itself and the Austrian Mint (Charts 2 and 3). Market participants have become fully accustomed to gradual gold sale. to the Mint over time, and transactions never reached a dimension that would have entailed negative signalling to the markets.

The paradoxical factors mentioned above do not really provide strong arguments for central banks to hold gold. However – and this is the most important point central banks have the primary objective of ensuring monetary lability. In order,- to attain this goal, reliability in the public eye is indispensable. Having a certain portion of gold doubtless adds to this credibility, and it is under this aspect that I expect central bank holdings to play a somewhat different but nevertheless very important role in the new ECB environment. After all, history, shows that currencies come and go, but gold has always remained. Central bankers have a reputation for thinking in long-term dimensions, and gold as a reserve asset has a natural place in such considerations. The ESB is the direct descendent of the best European central banking cultures. It is fair to expect that the ECB will not neglect one of the very, very few long-proven recipes to bolster confidence in the new currency: to hold gold as part of its reserve assets.

Rudolf Trink joined the OeNB( the central bank of Austria) in 1978 after having he received his doctorate from the Vienna University of Economics. He spent two years in the domestic and international research division and subsequently transferred to the treasury section in 1986, he was appointed deputy head of the domestic bond division. He became head of the coordination office of the banking department in 1989, giving him responsibility safekeeping of the bank's domestic gold holdings. He participated as a gold expert in the United Nations ROP (return of Property) programme in Ar-Ar, Saudi Arabia n 1991. In 1992, he became head of the strategy division within treasury. From 1994 onward he became the Bank's representative in the FXP (foreign exchange policy sub-committee) at the EMI in 1998, Mr Trink was appointed director of the OeNM's treasury section,