Gold From the Mists of Time

The towns of El Dorado and Las Claritas swelter on the damp green lowlands of south-eastern Venezuela bordering Guyana. It is the site of one of the world's great gold discoveries and although 200km form the coast the celebration here is only 130 metres above sea level.

But as you head south on the blacktop highway towards the Brazilian border, you mount the Roraima Plateau, climbing through densely forested slopes. After a short journey, you enter another world, where the air is crisper despite being only 600 km from the equator. Here the forests have given way to grassland, and the plateau, cut by rivers, forms spectacular waterfalls over vertical escarpments. This is Canaima National Park, an UN-designated World Heritage Site, about 70 km south of Las Cristinas, Placer Dome's new gold project in Venezuela. Canaima's mysterious flat-topped mountains, called tepuis, their summits rendered inaccessible by dizzying cliffs, inspired Sir Arthur Conan Doyle's famous 1912 adventure novel The Lost World.

The Guyana Shield, the name for the geologic unit of rocks that make up the north-eastern corner of South America, was once joined to what is now West Africa. Scientists believe that when the earth's crustal plates spread apart between 70 and 180 million years ago, South America took leave of Africa, leading to the formation of the Roraima plateau, a vast sandstone block composed of material from eroding motu1tain ranges on the Guyana Shield.

As unimaginably old as these events are, the formation of gold preceded them. The gold of Las Cristinas is about 1,500 million years old, when mineral deposits, chiefly concentrations of gold, uranium and iron, were formed by hot fluids from within the still cooling earth, which infiltrated the hardening layers of young earth's crust. Millions of years of geological events such as erosion and deformity deposited the gold in the weathered rocks of the Guyana Shield.

These were among the last creation events before the opening of the Atlantic. Hence, across the ocean in West Africa, in rocks that bear a family resemblance to the Guyana Shield, reside the gold mines that enriched the world of the Egyptians, Greeks and Romans and still remains one of the great gold provinces of the world. 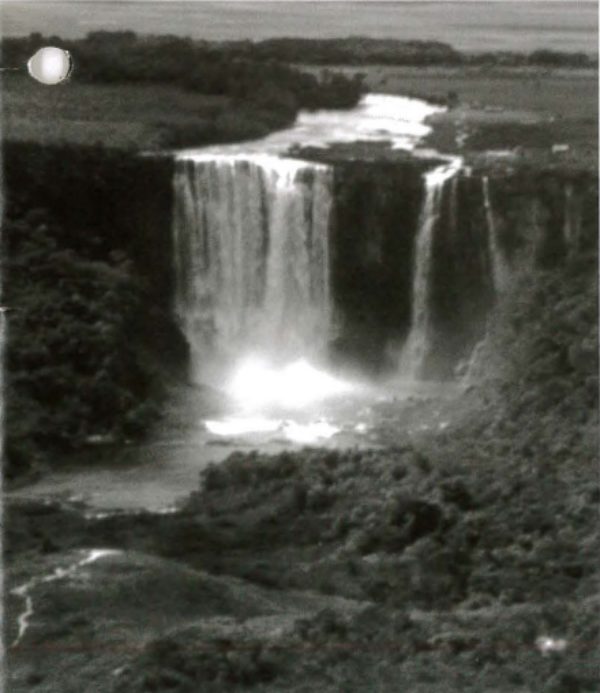 "For a miner must have the greatest skill in his work, that he may know first of all what mountain or hill, what valley or plain, can be prospected most profitably, or what he should leave alone; moreover, he must understand the veins, stringers and seams in the rocks."- Georgius Agricola, De Re Metallica, 1 556

In the recent past, the environs of Las Cristinas were worked by thousands of migrant hand miners, using sluice boxes and running water to extract visible gold. They l e ft behind piles of discarded gravel, or tailings. The government put the area out to tender, envisaging that an international company could develop a new mine as well as process additional gold from the tailings. No one had yet drilled into the bedrock using modern exploration techniques.

Placer won the tender in 1991 and began testing over the course of five years to determine the extent of the gold present in the bedrock and to delineate the size, shape and depth of the orebody in order to choose the most efficient method of mining. The top of the orebody was found to consist of a heavily weathered, reddish-brown soft earth called saprohte, basically compacted sand. It contains little gold but can easily be dug without blasting to reach the carbonate bedrock that contains the ore.

The drilling results and estimation work using fire assay and other methods built up an increasing reserve and resource estimate. The deposit has been found to contain 12 million ounces, and the $575 million project to develop it will include the largest gold processing plant in the Placer Dome Group, with a capacity of 45,000 tonnes of ore per day.

The low-grade ore at Las Cristinas lends itself to open-pit mining, allowing speedy processing of large quantities of ore - where an underground mine might process 1,000 tonnes of ore a day, that quantity can take 10 minutes in an open-pit mine. Because the gold is mixed with large quantities of copper, it will be necessary to develop two processing streams - one to produced ore, the other to produce a coarse grey gold/ copper concentrate to be sent out to smelters for processing.

Millions of years of geological events such as erosion and deformity deposited the gold in the Weathered rocks of the Guyana Shield. 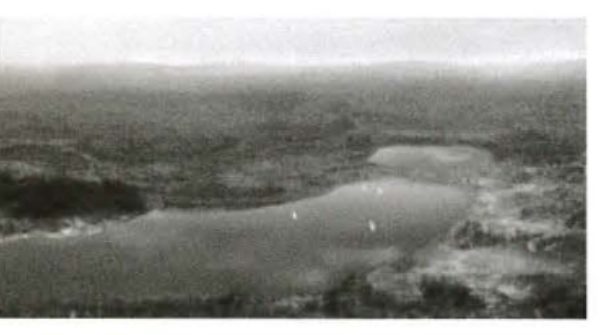 The previous decades of band mining have left the area around Las Cristinas scarred. The concessions arc a patch­work of undisturbed forest broken by hundreds of hectares of cleared areas with heaps of discarded gravel and numerous water-filled pits. River channels have been altered by dikes and the scouring of river banks by past hydraulic mining. Some rivers carry heavy sediment loads from. on-going illegal mining upstream of the concessions. Flooding and changes in drainage patterns caused by previous mining have produced waterlogged forest areas where tree. are dying because of poor drainage. Migrant miners used mercury to amalgamate gold into clumps, then discarded the mercury, which contaminated the soils of cleared areas and river sediments.

Mercury is no longer used in modern gold recovery processes. The cyanide now used in the extraction of the gold will be recovered for re-use at the processing plant before tailings are pumped to the tailings pond. In addition, a cyanide destruction plant will be constructed at the tailing pond to treat any The­ remaining cyanide in the pond water before discharge to the environment.

The extensive water management plan has been designed to control surface runoff and to protect groundwater quality. The dam walls are being ' over­ built with sloping sides inside and out, and the slopes will be vegetated to inhibit erosion. Dam heights have been designed to provide capacity to store water from extreme events, such as a 24 -hour rainfall, a three-month rainy season and a once-in- 200-year storm event. 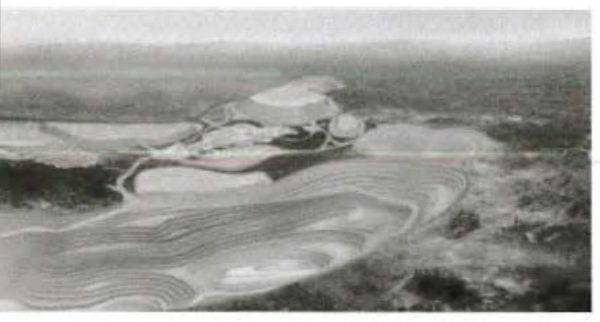 Planning for the Future

ln previous times, when an open-pit mine ran out of ore, it was simply abandoned, leaving a gaping hole into which rainwater would wash and leach out trace metals into the environment. Today, the goal is to return impacted areas to as natural a condition as possible.

At Las Cristinas, rehabilitation work has already started on some of the previously damaged areas and will continue throughout the operating period as disturbed areas are no longer required. Joint research with Venezuelan universities and research iJ1stitutions is determining the most effective methods for conditioning soils, choosing and planting vegetation species and developing animal and fish habitat.

Piles of waste rock will be covered with topsoil and seeded, and will quickly become covered with vegetation in the lush tropical climate of south-eastern Venezuela. Once the mine is finished, the pits will be allowed to fill naturally from the rising water table.

The flooded pits should have no impact on ground-water quality because e mine walls that might otherwise generate acid rock drainage will be sub­merged and rendered inert by lack of oxygen.

A mine can help kick-start a whole new local economy, not only through the immediate impact that construction jobs will provide. It can encourage the growth of businesses that produce goods - for example, agricultural products - that will attract additional customers outside of the mine.

Placer Dome has been relating successfully to communities and environmental challenges in Papua New Guinea for decades. Through its new sustainability policy, the company is raising the stakes to make Las Cristinas the reality of an even better model.