Recent woes of the Gold market and market for gold stocks give us reason to reflect on methods of missing capital for goldmine development projects. Royalty companies of an alternative method of raising capital, particularly for operators where the cost of equity is high and debt financing is unavailable.

This paper examines a case where $5 million is required for reserve development, drilling and feasibility work on a million-ounce discovery that ha - already reached the pre­ feasibility stage, and compare scenarios where the capital is raised via the 'sale of equity or the sale of a royalty'.

Selling a royalty causes less dilution than joint venturing, and preserves existing shareholders' interest. at the corporate level. Depending on the likely cost structure of the mine, the operator may seek to sell a net profits interest or a net smelter returns royalty. In down markets, the Net Profits Interest (NPI) offers more upside for the royalty financier and less risk for the operator and thus may be an attractive alternative to the conventional Net Smelter Returns (NSR) form of royalty.

The disadvantages of conventional mine finance become particularly pronounced in times of a down market. When equity markets are buoyant, the sale of equity can be an inexpensive S0Luce of finance; conversely, when the markets are in the doldrums, selling equity can seriously erode the existing shareholder base because low share prices force too much of the company to be sold. The most common alternative to selling equity is to the joint venture. While joint venturing presents an attractive variation, it still results in dilution to shareholders at the level of the property. It can also make life more complicated if the interests of the parb1ers start to differ. Debt financing may be an alternative for more advanced projects, but most smaller or earlier stage companies may find required debt covenants overly restrictive (the Company may be prevented from selling assets or restructuring existing contracts).

Selling a royalty interest to finance further development and a feasibility study can present an acceptable solution to raising capital while simultaneously avoiding dilution or new partners. In countries with accounting conventions similar to those in the United States, a royalty payment is a cost of sales and is accounted for as an expense. For a gold producer looking for annual ounces of gold production and reserve base, the Company books all of the gold production for its own account and subtracts the dollar amount of the royalty as a cash cost of production. The royalty burden does not reduce the number of ounces of gold that the operator can claim to produce, and the operator retains the full amount of gold reserves on its books, undiluted by the royalty burden.

The two most common forms of mineral royalty interest are the Net Smelter Returns and the Net Profits Interest.

An NSR royalty is calculated in percentage terms based upon the amount of proceeds paid by are finery or smelter for dare or concentrates. Depending on the commodity or product produced, an NS R can vary widely. An NSR royalty on a gold mine where the product is dare closely approximates a percentage of the gross value of gold produced; however, if the gold contained in concentrates, the smelting charges will exceed those incurred in refining dare, and the royalty will be commensurately less. Smelting charges for base metals constitute a large portion of the value of contained base metals, implying that an NSR on a base metal mine (even one with a precious metal credit) will be even smaller. For purposes of this paper, assume that an NSR royalty equates to a percentage interest in 99% of the revenue (1% being deducted for transportation, insurance, and refining). NS Rs are commonly used because of their relative case of calculation; however, because they are tied to revenue, with essentially no consideration for costs, SRs place most of the risk on the operator, who face paying the royalty whether commodity prices are high or low.

An NPI royalty is calculated in percentage terms, based upon the net profits of the operation. Therein lies its attractiveness: the NPI spreads the risk between the operator of the mine and the owner of the royalty. Both share in the profits, therefore, their interests tend to be more aligned. The mine operator knows that the NPI will diminish if profit margins are squeezed, but he/she must give up more of the upside when times are good. From the owner's perspective, there is much more of a between to understanding the complexity of mining and processing costs and having access to the operator 's production and sales information. Due to these latter considerations, it behoves the owner of an NPI to have considerable skill and capability at monitoring and auditing the operation. 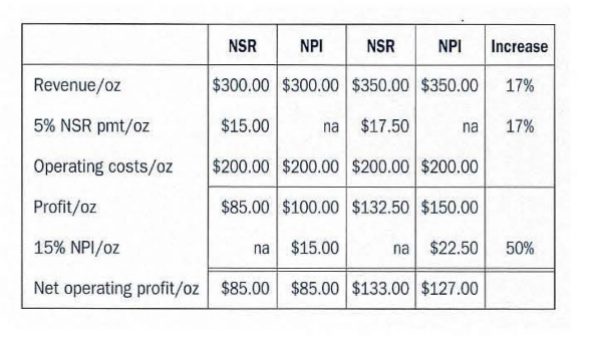 NPI: Tied to profits, offers higher yield in up markets, operator and owner share risk, highly levered. (On the same 17 % increase in the gold price, an NPI offers a 50% increase in profits and pay-out). 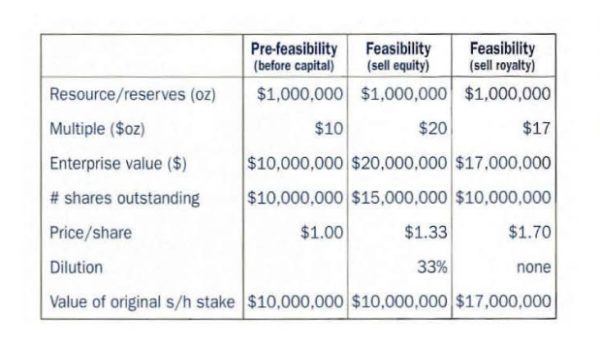 Feasibility stage projects are generally worth twice what a pre-feasibility stage project commands, and profitability multiples are recently about $10/contained ounce of gold. Keeping in mind that the multiple for a project bearing a royally must be reduced (by 15% for a 5% NSR at $ 300 gold), we can see that existing shareholders are $3.67MM better off (having avoided a 33% dilution) raising capital by selling a royalty than they would have been by issuing equity.

Raising capital via a royalty company such as Royal Gold offers the operator additional flexibility: he/she may have the option of choosing between cash, stock, or a combination thereof. For instance, Royal Gold can offer to purchase a royalty in exchange for registered shares, and therefore the operator can meter out the registered shares to realise proceeds as needed. The timing of such sale may provide tax benefits, and the operator can also enjoy the benefit of capital gains should the royalty company's shares appreciate during the period in which the operator is selling.

Royalty Financing - "Mine Financing By Miners for Miners"

At Royal Gold, we see ourselves a very much aligned with the interests of the miner. We succeed only if the miner produces. In the case of an NPI, we succeed only if that production is profitable. We are mindful of this when we put the terms of a financing together. We will not overlook a miner, as we want the miner to succeed.

Gold mining projects are worth more as the related risks is reduced. For instance, gold projects depending on their stage of development are valued at dollar multiples that vary with the development stage of the. Projects and quality of the project. Exploration projects are currently valued at $6-7-ounce, pre-feasibility stage projects at $9-15 per ounce, feasibility stage at $30 per ounce, and a producing mine is worth its profit margin per ounce about $70-125 per ounce

Stanley Dempsey has been in the mining business for more than 35 years. He received a degree in geology and a J.D from the University of Colorado, and completed the Program for Management Development at the Harvard Business School. Previously employed by AMAX, Inc he held various engineering, legal and operating positions within the company and vice president from 1977 to 1983 before becoming chairman of AMAX Australia Limited from 1981 to 1983. Mr Dempsey practised law as a partner of the Washington DC and Denver firm of Arnold & Porter from 1983 to1986.

Tom Loucks has worked in the mining industry for the past 23 years and is Executive Vice President and Treasurer of Royal Gold. Prior to joining Royal Gold Mr Loucks was employed by Newmont Mining Corporation and worked in the arear of corporate planning, acquisition and diversities.

Before joining Newmont, Mr Loucks was a senior project geologist with AMAX Inc in mining projects development and evaluation and also spent over six years in foreign and domestic mineral exploration with Kennecott Copper Corporation. Mr Loucks has an MBA from the Stanford Graduate School of Business and I.M and A.B degrees in geology from Dartmouth College.