Gold averaged just $294/oz in 1998, its lowest level since 1978. Due to a lack of alternative hedges twenty years ago, the kind of turmoil seen on. Financial markets in 1998 would have resulted in a very different price trend then. Although gold's decline was temporarily reversed in the third quarter - following the collapse of the rouble, the fall in the dollar a9ainst the yen and the failure of Long Term Capital Management - the rally in the price was rather disappointing, given this combination of events. This was because the price spike was largely based on short covering. Very little fresh money came into gold; instead, investors sought refuge in government bonds. 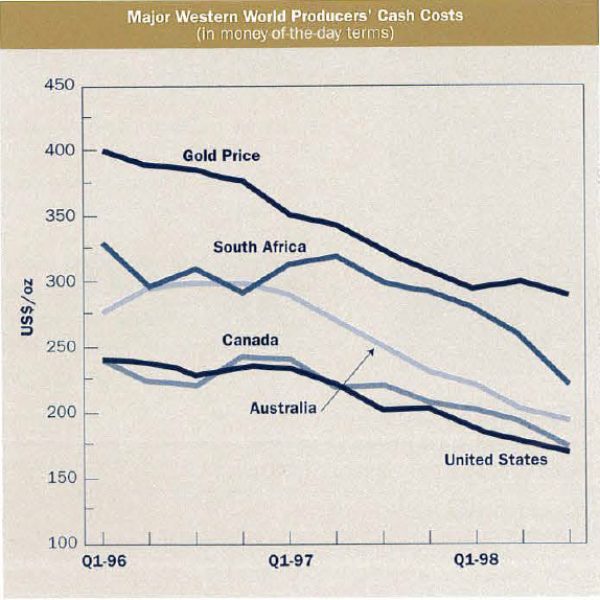 The lack of serious investment interest on the long side meant that gold's own supply/ demand fundamentals and the wider economic environment in which these were operating largely determined the price. As regards the economic situation, first East Asia and then the world economy as a whole were to experience a fairly sharp downturn in GDP growth. Although gold demand in the OECD held up well last year, the same cannot be said for East Asia. Hundreds of tonnes of scrap moving out of the region, causing it to become a net supplier to the international market during the first half. In "normal" times East Asian demand would instead have provided a floor to the price at a much higher level, in fact, probably above $300. 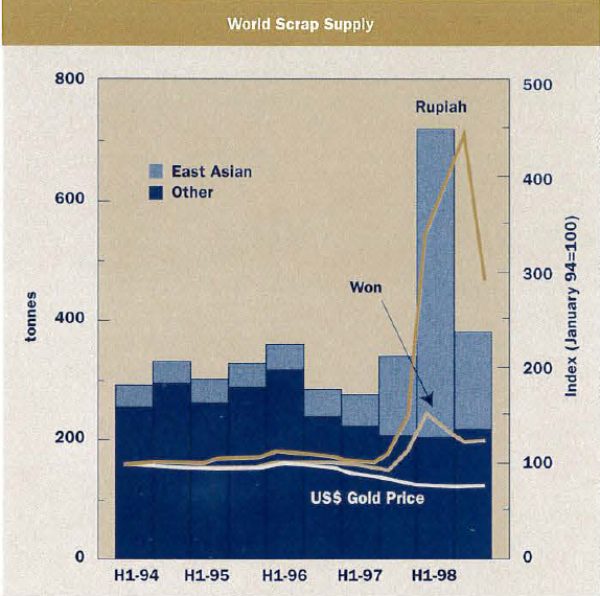 Total supply declined by less than 2% during 1998. However, to conclude from this number that nothing changed on the supply side of the market last year would be a mistake. In fact, the composition of the total supply number changed dramatically, partly in response to unprecedented movements in local gold prices. In 1997, the "deficit" between mine production and total fabrication demand - 1,418 tonnes - was filled by similar volumes of contribution. In both years, it was gold from vast above­ ground stocks that filled the "deficit" in one form or another.

The prominence of scrap supply in the market in 1998 was a natural consequence of localised economic distress and historically high local gold prices, resulting in more than 1,000 tonnes flowing into the market during the year. Although GFMS do not expect this phenomenon to be repeated during 1999, it is likely that scrap supply from East Asia will remain at higher ­ than-average levels as the effects of the economic downturn continue to be felt.

This record scrap flow filled the hole left by much-reduced volumes of producer-hedged gold. Indeed, for the first time this decade, outstanding forward sales declined on a net basis year-on-year, although increased use of options and the delta hedging associated with this activity resulted in net supply to the market from producer hedging. In the coming months, hedging behaviour will be determined as much by producers' views on the outlook for gold as actual price developments. As a general rule, GFMS believes that the industry is underhedged and further hedging can be expected on any upturn in the price.

Producers showed their resilience to weak prices by adding 57 tonnes to mine production. During the first three quarters, weighted average total cash costs of production dropped sharply to around $210/oz, and by the third quarter, average total cash costs had dropped convincingly below $200/oz. Although a substantial proportion of these reductions was due to currency effects, it is clear that miners can continue producing, indeed, opening new mines, at current prices. In the short term, the outlook is for mine output to continue to expand, albeit at a slower pace.

In 1998 the official sector was much less in the news than was the case the previous year when the market's near-obsession with central bank sales was a driving force in price-determining behaviour. Nevertheless, central banks were no less active last year. GFMS estimate that net sales were 8% higher than a year ago. Although there have been no announcements confirming large-scale sales in the second half of 1998, this was convincingly suggested by market indicators and anecdotal evidence. GFMS's expectation is for further net sales and lending during the first half-year of this year. 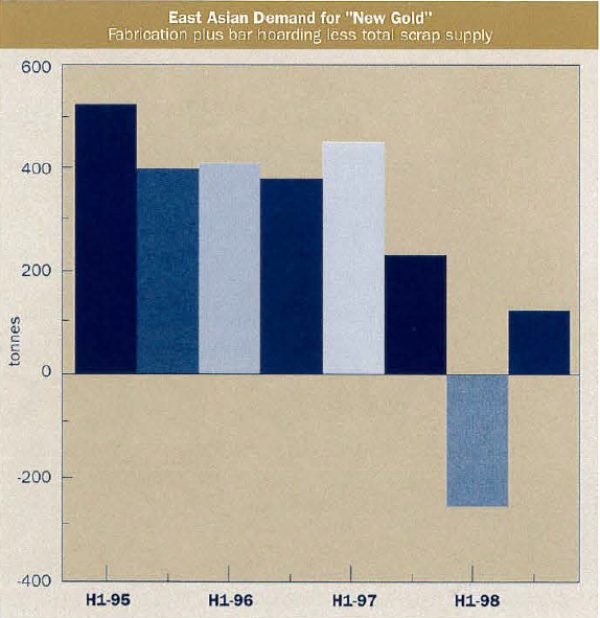 Total fabrication demand in 1998 held up primarily due to increased Indian, European and North American jewellery demand, which almost completely offset the collapse in East Asia. Indeed, East Asian demand for "new gold"- gold bought on the international market as opposed to locally produced scrap - fell to such low levels that the region became a net supplier to the international market in the first half of 1998. The magnitude of the collapse in East Asian demand suggests how substantial growth in the other regions needed to be to hold the year­ on-year decline in world fabrication to just 3%.

While jewellery continued to dominate the demand picture in 1998, a number of significant developments could be observed in the area of investment. On the one hand, coin fabrication increased by 26% during the year; on the other, a 54% decline was recorded in bar hoarding. More important to the market's overall price equilibrium, though, is North American/ European investment. GFMS' invest­ment/disinvestment number is a residual derived f om the sum of all the other supply-and-demand components, and as such is a useful indicator of what has been happening at the "margin". During 1998, investment, particularly in the second half, was an important factor underpinning the price at a time when the fundamentals still looked weak. However, investment was quite modest, given the seriousness of the crisis at the time, taking the form of short-covering rather than a genuine move to the long side. 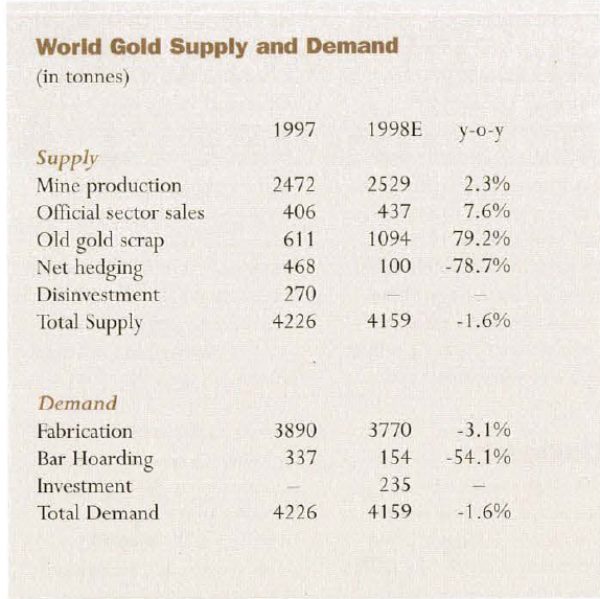 Developments op the supply side in the past year will continue to influence price formation in 1999. The GFM view is that continued flows back into the market from above-grom1d stocks in the form of jewellery scrap and official sector sales and lending will continue to constrain the market on the upside. Perhaps, even more, importantly though, mine production costs have plummeted in the past year. The implications are firstly that mining companies can maintain production levels for the foreseeable future, and secondly, that further hedging could be done even in the absence of a substantial price rally, as the margin which would be locked in could be quite attractive.

As for demand, GFMS suggests that it is likely to remain weak in the first half of this year. Of pivotal importance to any view of the demand side is not simply what will happen to the dollar gold price but also to local gold prices and incomes. Many countries are still vulnerable to both income and exchange rate shocks that could have serious implications not only for demand but for supply as well (in the form of scrap). H the absence of any major shocks, GFMS expects currency weakness, a return to disinvestment, falling/ stagnant incomes plus a high level of jewellery trade inventories to, in short, the poor state of the world economy and the balance of its own supply/demand fundamentals mean that gold is unlikely to break out of the $270- $310 range in the first half of this year.

GFMS can envisage circumstances causing gold to break above $310, although they do not seem particularly probable. For instance, a serious threat to global financial stability, possibly triggered by a collapse in world stock markets (arguably they have Far more downside potential than upside), combined with a large fall in the dollar, could stimulate buying interest from individual investors as well as f om the funds. Unless there is an important shift in producer attitudes to the price, hedging will act to constrain any sustained break out above $310.

On the downside, there is still the possibility of a further series of devaluation in the major. consuming countries like India and China, causing a sharp fall in demand ( and the potential for net supply from the scrap) If in this scenario miners decide to lock in at prices below $300, perhaps as low as $285 - $295 ( especially in light of the sharp fall in costs last year), the price could well move below $270.