The economic crisis that has gripped Asia over the past year and a half has been nothing short of spectacular.

In few other areas was the devastating effect of the crisis more clearly seen than in its impact on the gold market.

ln the late 1980s and 1990 s, the "Tiger" economies were hailed as economic miracles, registering strong growth in relatively steady inflation and high employment environment. High growth coupled to stable local currencies against the US dollar in countries like Indonesia and Thailand combined to stimulate gold demand, and from late 1980 up to 1997, new gold offtake in East Asia grew rapidly. From 1989 to 1997 alone, new gold offtake in the region (that is fabrication plus bar hoarding less scrap) amounted to well over 7,600 tonnes (excluding China). Circumstances changed rapidly in July 1997 in the aftermath of the collapse of the Thai baht, followed later, and more dramatically, by the free-fall in the Indonesian rupiah and the Korean won (see Figures 1 and 2). Most other currencies in the region weakened too, with the notable exception of the Hong Kong dollar and the Chinese yuan. In addition to the currency collapse, asset prices fell sharply as well. 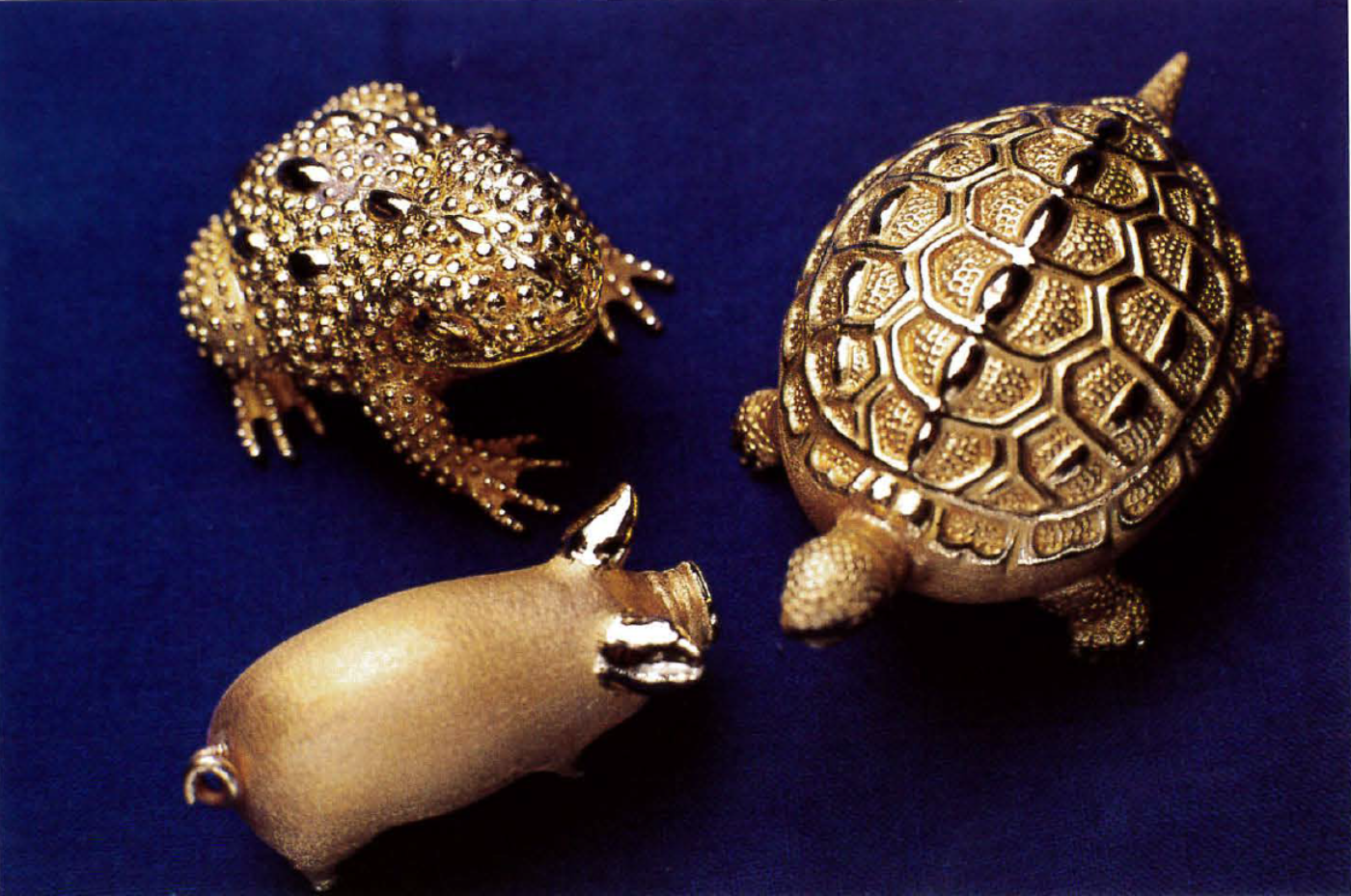 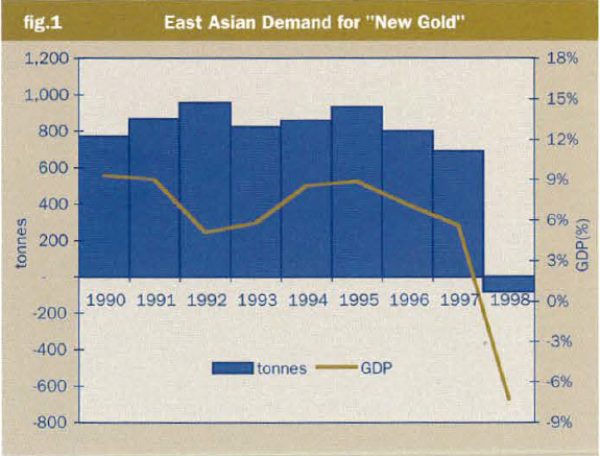 Although the initial effect on the gold market was seen primarily in the collapse of demand, both sides of the supply and demand equation were eventually affected. The first effect was primarily price related, impacting directly on-demand as local prices soared whilst the second was both price and distress related and acted mainly on the supply side (although income shocks did, of course, reduce demand as well). In countries like Thailand and Indonesia, the collapse in local jewellery demand was almost total as local prices rose rapidly, but this was followed shortly by a wave of price and distress related selling of bars and old jewellery. The overall effect on the market in 1997 was relatively muted since the crisis had started in mid-year and only really took effect across the whole region relatively late in the year. Even so, new gold demand in 1997 from East Asia (excluding China) fell to only 690 tonnes, representing the lowest annual level for the decade to date. But it was not until 1998 that the real impact on the East Asian markets was felt. 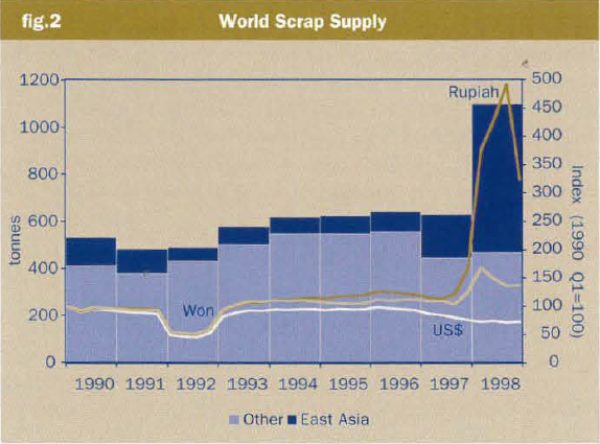 The year opened with waves of selling out of the region, primarily out of Korea and Indonesia. South Korea made the single biggest contribution to world scrap in 1998. In fact, at over 300 tonnes, Korean scrap was equal to 27% of scrap supply or around 7% of total supply, a quite astonishing figure (in 1997, Korean scrap had accounted for a paltry 0.3% of total supply). Much of the scrap was collected in the first quarter of 1998, in response to the national gold collection campaign. The campaign was a huge collective effort coordinated by the chaebol (conglomerates), various banks and broadcasters to raise dollars to defend the won and save the economy. The response of the Koreans to the campaign was quite incredible - the 300 tonnes collected imply a per capita contribution of around 7 grammes (by contrast, a similar campaign in Thailand managed to collect a total of only a couple of hundred kilogrammes).

Scrap flows out of Indonesia in 1998 were al o at unprecedented levels. GFMS estimates that over 200 tonnes of scrap were generated in 1998, but not all of this was shipped out of the country. Some were used to feed local fabrication demand. Indonesia, at times a heavy importer of gold, saw imports for the year fall to almost nothing. The motivation for selling scrap in Indonesia stood in stark contrast to Korea. In the latter, "patriotism" was certainly a driving force, whilst in the former, the selling was purely price and distress related. Scrap flows out of Indonesia started in late 1997 but peaked in the first three months of 1998. The scrap flowing out of the country was in a variety of forms. Initially, jewellery was being melted down and semi-refined to 99+ quality and shipped out, but problems with, customs meant that eventually very heavy pieces of crude jewellery were being exported. The major destinations for Indonesian scrap were Singapore (for eventual shipment to various refineries around the world as well as being processed locally) and Hong Kong. From there, some found its way onto the local tael market and some were sent to China, where strong demand was seen, particularly at the beginning of the year.

Elsewhere in the region, scrap continued to flow out of Thailand in the first half of 1998 in spite of the crisis there being over six months old. GFMS estimates that the total for the year fell by around 33% year-on-year, to around 50 tonnes, a level still far in excess of the average level of seven tonnes seen over the past 10 years. Much of the selling back of scrap in the second half of 1998 was distress rather than price related,0 as the baht strengthened against the dollar.

Scrap was not the only consequence of the crisis. In 1998, the region recorded net dishoarding (that is, gross purchases of bars were less than gross sales of bars) - the first time in 23 years that this has happened in East Asia. After years of consistently buying large volumes or bars, the Thais turned into net sellers in 1997 and 1998. Dishoarding was motivated by a combination or high local gold prices as the that devalued and distress selling associated with the unfolding economic crisis. It is revealing that average levels of dishoarding increased in 1998 compared to the second hair of 1997, suggesting that the economic shock waves really started to impact on the broader population at that time. Unlike the Thais, the Indonesians have never been great hoarders of bars, preferring to hold their gold in jewellery form. Consequently, dishoarding, both as a percentage or the total amount of gold coming out of the country and in absolute terms, was much smaller in Indonesia than in Thailand.

The effect of this on East Asian new gold demand was dramatic, and in 1998 the region became a net supplier or gold to the world market. To put this in context, in 1996, East Asia accounted for 25% of world demand and consumed 800 tonnes of new gold. To further illustrate the impressive nature of these flows, it is apposite to point out that the increase in scrap last year (which effectively entirely clued to the rise East Asian scrap) was equivalent to total central bank sales. The reader unfamiliar with the physical bullion business could well be left wondering how such large volumes of gold reached the international market as quickly as they did. The answer lies in the remarkable efficiency of the global banking and refining network - for example, gold coming out of Indonesia was transported, refined and delivered onto the London market in a matter of days.

Of course, demand in East Asia did not drop off entirely. In China and Hong Kong, the peg of the yuan and the Hong Kong dollar against the US dollar meant that they avoided the worst of the regional currency crisis, but even they did not emerge unscathed. Both recorded sharply lower new gold demand year­ on-year as their economies slowed. Even in countries like Malaysia and Thailand, where local consumption fell away sharply, exports ensured that there was still demand for gold to be used in jewellery manufacturing.

What lessons can be learned from recent experiences in East Asia? The first is that gold has and will continue to play an important role in many Asian economies as a hedge. There can be little doubt that the effects of the crisis would have been worse if in individuals had not held as much gold in high carat form as they did. The second is that the mobilisation of "near -market" stocks of high carat, low mark-up jewellery found extensively in the Asian region can constrain the price. In fact, it seems obvious to point out that the price in 1998, certainly in the first three months, would probably have been substantially higher in the absence of such huge flows.