Today's familiar Panda coin has an ancient ancestor in the little squares of gold which circulated as currency at least as early as 1091 BC. The Hebei province claims to have been producing gold for over three thousand years and is still one of the country's main mining areas today. China and gold have had a relationship for thousands of years.

The Chinese love of gold has never the less run into difficulties, notably after the Communist Revolution. For 35 years between 1949 and 1984, C Chinese citizens were not allowed to own gold in any form. During the Cultural Revolution between 1966 and 1976, many families were forced to surrender their traditional belongings - including gold - to the state. However, with the introduction of the "open door" policy in 1978, which was designed to galvanise an antiquated economy, the Chinese began rapidly rediscovering their affinity for the yellow metal, "kam", and both gold production and consumption climbed rapidly throughout the late 1980s and early 1990s.

More recently, the Chinese gold sector has fallen victim to many of the problems affecting the wider Chinese economy. Growth has stagnated under the restrictive influence of burdensome state controls, outdated technology and lack of investment. With the international gold market depressed and gold prices at their lowest levels for 20 years, the second wave of growth in the Chinese gold industry would be welcome. The prospects of this happening depend crucially on how successful the Chinese government is in modernising the country's gold mining sector and freeing up the restrictions that currently exist in the local market for jewellery and other gold items. 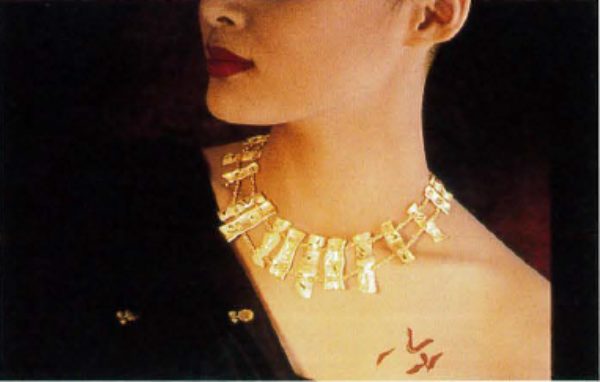 Chinese gold production increased rapidly following the liberalisation of the economy in the 1980s, growing at an average rate of ten percent p.a. since 1974. Encouraged by the government, many non-state gold mines were set up. Today there are over 1,200 mines across China, many of which are very small indeed. This rapid proliferation has brought its own problems. Many of the small mines use very rudimentary technology and waste resources. Officially, the number of mines reporting a loss at the end of 1997 was almost a third but in reality, the figure was probably even higher. In addition to the formally approved sector, there are a huge number of illegal mines. Here environmental precautions are often inadequate and "high grading" is a particular problem. Illegal miners’ high grade a gold deposit by taking only the 20-30 percent of the oxidised surface that is easily processed, making the remaining ore much less attractive to exploit.

In order to deal with problems such as these, new rules tightening control over the issue of mining rights were introduced in February 1998. These were intended to ensure the implementation of the 1997 Mineral Resources Law and are designed to ensure that ownership of mineral resources resides with the state. Tighter control has reduced the number of unprofitable mines to a quarter but has also slowed the rate of gold output growth. Production this year is expected to rise by less than two percent. A priority now is to intensify geological prospecting in the next three to five years because there is a perceived shortage of ore reserves necessary to foe! continued growth into the next century. To achieve this, the authorities hope to attract foreign participation.

However, until recently, investing in the Chinese gold sector was not a happy experience for the few foreign companies prepared to take the plunge. Indeed, China's own Gold Bureau, part of the State Economic and Trade Commission, recently admitted that foreign participation had mainly been restricted to low grade and refractory gold reserves, generating little interest from foreign companies. Neither have joint venture relationships with local entities always run smoothly. Asia Mineral Corp (AMP) of Canada was the first foreign company to form a jv to develop a gold mine in China (with Shandong Zhaoyuan City Gold Corp in 1996). But in early 1998, AMP terminated the project, stating that the Chinese company had breached numerous provisions and principles of the jv contract.

More recently, there have been some signs that the environment for foreign investors may be improving. Th e new mining law introduced in early 1998 not only centralised the ownership of mineral resources by the Chinese State but also allowed foreign­ controlled joint ventures to directly hold exploration licences for the first time. Since then a number of western companies have been issued gold mining licences, including the UK's Griffin Mining Limited (via its 60 percent owned Hebei Sino Australian Mining Development Company), Southwestern Gold Corp and Global Pacific Minerals (both of which are co-operating with China's Northwest Geological Bureau).

Perhaps of most significance however is the involvement of mining giant BHP which in late 1998 signed a contract with Guizhou Province to jointly seek gold deposits in the province's Nanpan River Valley. In a recent interview, BHP group general manager Hugo Dummett said that "the gold program in China is one that we like very much because it is very much like Nevada, which means if we're successful there we're going to find large, high-grade gold deposits [like those] found in Nevada in the past 5 or 6 years". 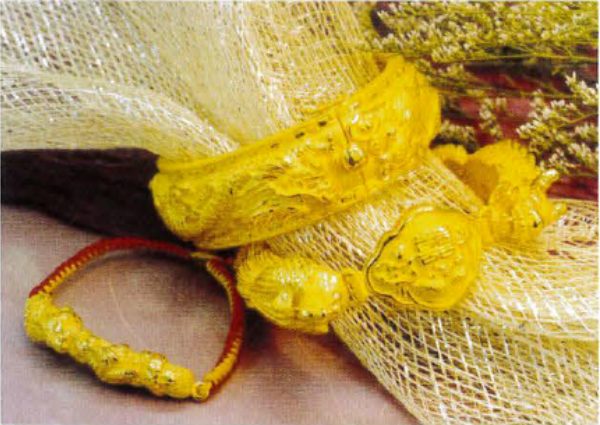 Another reason for China's image as a difficult place for foreign mining companies to be involved has been the fact that the only legal gold purchasing agent is the People 's Bank of China (PBOC), and the price that it pays to local gold producers is fixed by the Bank itself. Through most of the early 1990s, China's official bullion buying price was fixed at levels significantly below the international price. However, since early 1997 the authorities have tried to align the PBOC's price more closely with international prices. Since then it has traded at a consistent premium, encouraging gold smuggling from neighbouring countries, primarily Hong Kong, as well as encouragi.ng illegal mining within China itself. During 1998 the PBOC cut its gold price several times as world prices fell but despite this Gold Fields Mineral Services estimates that local prices were on average still around $15/oz higher than the London fix. 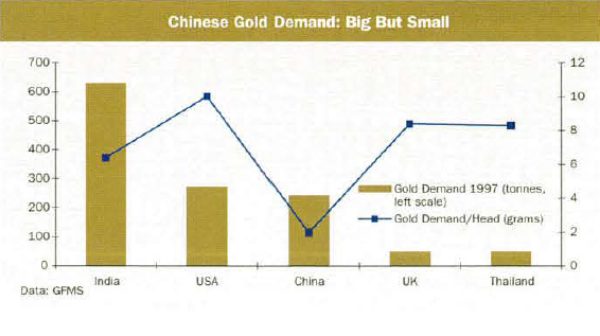 Chines e demand for gold has increased enormously in the past ten years: it now ranks amongst the world's top five consumers of gold. Gold for use in the fabrication of jewellery rose from just 29.3 tonnes in 1989 to a peak of 224 tonnes in 1997. Over the same period, the number of shops selling gold jewellery has grown from around 2,000 to more than 9,000. Despite these impressive figures, there is a feeling that China is yet to fully develop its gold consuming potential. Per capita consumption of gold r e mains very low by global standards at just 0.2 gm. By comparison, consumption in Hong Kong stands at 9 grams, and in India, a country with significantly lower per capita earnings than China, consumption is three times as great at 0.6gm. There has been very little growth in gold consumption in the past six years, and last year it actually fell to below the level reached in 1992.

The main factor hampering the development of gold demand in China is tight government regulation. Neither bullion bars nor foreign coins can be sold locally, so gold sales are heavily dependent on the jewellery sector. Government control of jewellery and gold bullion prices and the resulting high premiums over international prices have encouraged smuggled imports of jewellery and also mean that there is little incentive to improve the attractiveness of local designs or the local gold jewellery distribution network. Interestingly platinum, whose price is not c0litrolled, appears to have gained market share at the expense of gold jewellery in recent years, growing at average annual rates of around 20 percent to a level of around 500,000oz in 1998. Thanks to the recent liberalisation of the economy, gold jewellery now has to compete in the family budget while an explosion in the availability of consumer goods such as televisions, washing machines, and refrigerators.

With, a population the size of China's, even a slight increase in gold consumption could have a large impact: a per capita purchase of one single gram of gold translates into 1,200 tonnes. The World Gold Council has identified market deregulation as a key issue in boosting Chinese gold demand. It is also working on educating the trade to upgrade its products and services and has run marketing campaigns designed to attract the attention of younger buyers. 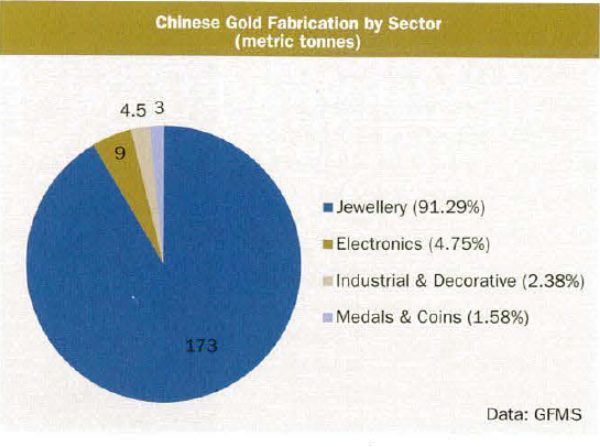 Chin a's gold reserves are extremely low by world standards when measured by official data. At 397 tonnes according to the IMF, the proportion accounted for by gold in China's foreign exchange reserves is less than one percent, significantly below those of other major world economic powers. Recently there has been talk of China increasing the proportion of gold in its reserves. Liu Shanen, Deputy Director of China's Gold Economic Development Research Centre, warned that excessive S US weighting of the foreign exchange reserves could make China vulnerable to any fall in the value of the dollar. At the end of March, China's official foreign exchange reserves were $146.6 billion. To raise its gold holdings to ten percent of this, China would need to buy around 700 tonnes of gold.

However, the gold market should probably not hold its breath waiting for massive Chinese purchases. With a number of central banks divesting themselves of at least a portion of their gold holdings over the past few years, it is unlikely that China will buck the general trend. In any case, China's officially reported figures for gold holdings are regarded with, great scepticism by the industry at large. ln fact, some estimates suggest that the Central Bank already holds as much as 1,000 tonnes of gold.

Kevin Norrish is the Minerals Economist at Barclays Capital. The Barclays Capital Commodities Group is a Market – making Member of the LBMA and its Mining Finance Team is a major provider of finance to the mining industry.

Kevin began his career in metals ten years ago at CRU International, ending his career there as Research Manager for Copper. In researching the metals industry, he has travelled wide/}', including several trips to China. He is a regular speaker at metals conferences and has a weekly slot (Wednesday mornings at h: I 9) commenting on metals marker developments for Bloomberg TV

He holds an MSc in Economics from the University of Reading.