The outbreak of World War I resulted in most countries suspending gold payments, except for urgent settlements. The gold standard collapsed during the war as central banks started keeping reserves in currencies that could be exchanged for gold. With the war's end, South African mining companies sought a means of open marketing for their gold rather than dealing exclusively through the Bank of England's set sterling price. They approached NM Rothschild & Sons, instructing them to market the gold at the best price obtainable, giving the London market and the Bullion Brokers an opportunity to bid’. The first fix took place on 12 September 1919 at a price of £4.18.9d per ounce (in dollar terms, $20.67).

Today the gold fixings take place at 10: 30 am and 3:00 pm at the premises of N M Rothschild & Sons Limited, the Chairman. In keeping with the principle of the original memo of 1919, all members of the fix participate on an equal basis. Market participants can buy or sell gold through the members at a single quoted price in the US Dollars. The fix provides a published price level, which is used as an official pricing medium by producers, consumers and central banks. It is the only market benchmark that can actually be dealt on. The narrow spread between bid and offer on the fix (25 cents) becomes even more attractive during times of market volatility when market spreads tend to widen. 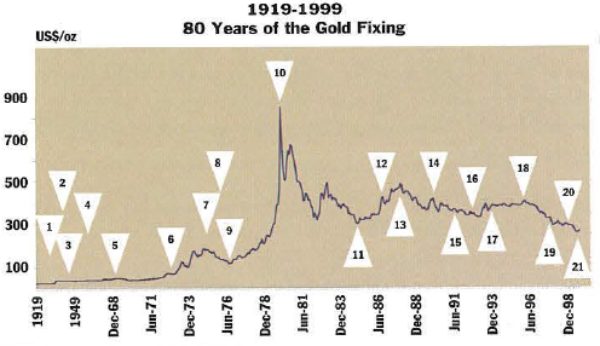 Mechanics of the Fix