A View from the US

Does the new millennium begin this year or next? Are we entering a new era for gold and silver in the US - or we have been in one for a while now? 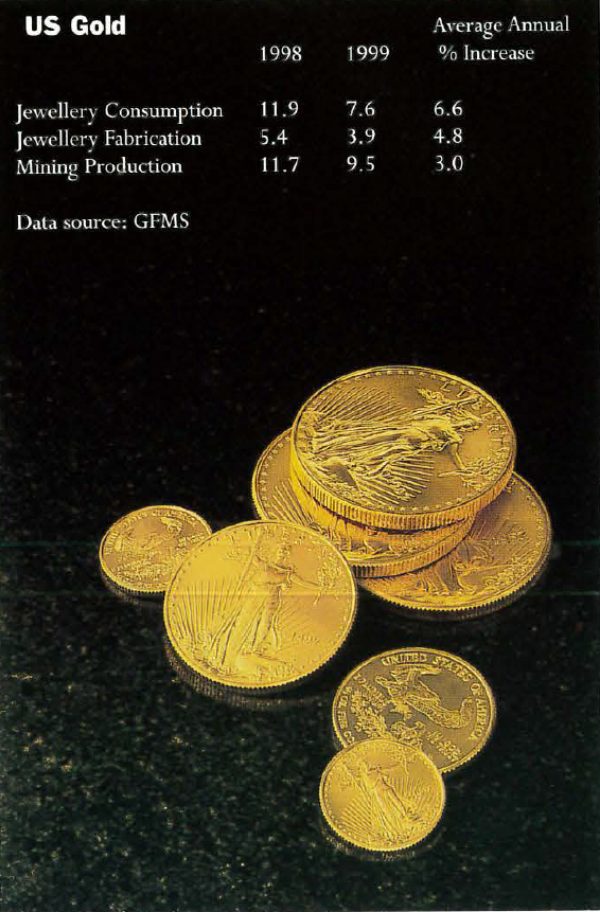 My answer to the first question would be: 'who cares? Just accept both possibilities and enjoy two years of millennium parties.

The answer to any questions about the outlook for gold and silver consumption in the US is somewhat more complicated, but must, in any case, start with jewellery. After India, the US continues to be the second-largest consumer of gold jewellery in the world, and there is no long -term sign of any abatement. Despite having the second-largest mining output of gold in the world, gold jewellery consumption in the US currently exceeds mining production.

As you can sec in Table 1, gold jewellery consumption from 1991 through 1998 increased by an average of 6.5%, while mining production increased by an average of 3%. During this period, imports grew faster than domestic Fabrication, going from 49% of consumption in 199 1 to 54% in 1998. Demand in early 1999 continued to grow, but fell off in the second half of the year because of the price spike in the autumn.US consumption has also start ed to shift into larger, higher­ quality pieces at the expense of more traditional mass-market jewellery. Pearl and diamond jewellery demand has been growing as well, but this tends to help the gold industry because the settings for this products are usually made from higher -carat gold (with the exclusion of pearl strand s). Neck chains still hold a commanding lead over all other types of jewellery products, accounting for about 40% of retail dollars spent. Rings (including wedding bands) arc in second place with about 17%, while earrings and bracelets are pretty even at 13-14% each.

The demand for platinum jewellery has been growing, especially in settings for more expensive stones. But even at its current rate of growth, which is roughly 20% per annum, it will be some time before platinum will start to have a significant impact on the growth of gold jewellery in the US. If gold jewellery consumption were to continue at its current 6% annual growth and platinum at its 20%, the result after five years would be over 16 million ounces of gold compared to 750 thousand ounces of platinum jewellery consumed in 2004. It thus appears that there will be room for growth in both metals in the years to come.

By far the biggest season for jewellery sales is the holiday season in December, followed by Mother 's Day and the wedding season in the spring. Of course, the heaviest demand for the bullion to produce the jewellery runs about two months before the actual retail sales occur.

Distribution of gold jewellery will probably change during the first years of the millennium as more and more consumers start to shop by computer. Non-store consumption of jewellery already accounts for close to I0% of all jewellery sales in the US, largely because of the acceptance of TV shopping through cable channels. More retail websites for jewellery will be created, and as graphics continue to improve, the quality of three-dimensional representation of individual pieces will allow consumers to view them from any angle. Since TV has already broken the way in remote jewellery purchasing, these on-line purchases should not take long to catch on, but, as with platinum jewellery, it will take a while to gain a significant market share because it is starting from a small base.

As mentioned earlier the price spike in 1999 caused jewellery demand in the US to slow. Some manufacturers cannot pass on an increase in the gold price immediately because they commit to holding a certain price for a period of time - perhaps as long as three months. However, many others base the price of their merchandise on the price of the gold on the date of shipment of the finished product and are thus able to pass on increases almost immediately. Usually, the full effect of a gold price increase for larger, high-credit gold prices can be passed on to the consumer within a few weeks.

It appears that a stable or slowly moving price under $350 would not affect current demand greatly, but if the price moved much above that area, consumers might start turning to electroformed jewellery.

Electroformed jewellery is hollow, very thinly walled, and can be made into very intricate designs. Hollow, somewhat flexible rubber moulds of the design are Filled with wax, treated with chemicals, and placed in a bath containing a gold solution. The moulds are then spun around for a number of hours, and the gold electrically bonds to the wax. The rubber moulds are then removed and the wax is drained. lt is important that the design is not too thin, sin it would dent very easily either in production or wear. Although the cost of production is relatively high, electroformed jewellery gives the appearance, but not the feel, of the heavier jewellery for considerably less cost.

Use of gold and silver in electronics has increased along with the supply of home computers in the US, with over 1.5 million ounces of gold and 44 million ounces of silver being used in the last year. The continued use of precious metals connections in comp­uting is currently facing a challenge from some new designs that use copper connections instead. Other industrial uses of gold were covered by John Lutley in Alchemist 16, and there have been moderate increases in usage over the last few years. This should probably continue as new applications replace old. Currently gold and silver industrial uses (excluding electronics and electrical) amount to about 5% of the total usage of gold and silver in the US. Gold use in dentistry is still important, with almost 500 thousand ounces of gold consumed in this application last year.

The largest application of silver in the US remains photography, employing about twice as much as the second-largest product. Although photographic demand has not yet been hurt by digital cameras, and there will probably always be a need for silver in higher quality photography such as portraits, the fact remains that digital cameras are getting cheaper while the pixel count is steadily increasing. As memory storage on hard drives and writable CD-ROMs becomes cheaper, and more of the population has access to personal computers, the number of prints made should decrease as people store and send photographs electronically.

For example, a parent in Dubuque, Iowa could take a picture of a child 's first step, download it into the computer and E-mail it to 50 relatives all over the world. The child's grandparent in Dubai could print a copy less than an hour after that First step.

This technology is currently here, but silver used in imaging will remain king a few years longer.

The large increase in gold coin demand over the last two years is most probably just a reflection of Y2K fear. The decline in demand for coins actually started during the last half of 1999, and demand will probably continue to decrease in 2000. The premiums for gold and silver coins have crumbled in the first few weeks of the new year as this dishoarding has apparently started in earnest. Thus far the rules for IRAs (individual retirement accounts), 401Ks and other tax-deferred US retirement plans have limited the ability of investors in these plans to buy gold or silver to the purchase of certain bullion coins. There is a chance that - if IRA and 401K rules are loosened to allow investors to also buy gold and silver through unallocated accounts at funds or financial institutions - a new influx of demand could come into the market as investors seek to diversify their portfolios. If even 1% of retirement funds were to be invested in precious metals, it would mean hundreds of tons in extra demand.

Thus, overall, the outlook for gold and silver demand in the US over the next few years may not be overwhelming, but it should continue to be, strong and steady.

Robert G. Arcand joined Fleet in 1982 as Head of the Operations Section in the Precious Metals Group. He moved into the trading arear in 1984 and has been Chief Dealer for Fleet Precious Metals since 1992. Bob started working with precious metals in 1970 in the vault and operations area at another major US bullion bank and moved up through the ranks to manage the precious metals operations before entering the trading arear there. He has presented a paper for the IPMI and has had articles published in international trade magazines. Bob has been on the Board of the New England Chapter of the IPMI since 1984, including having served as both Secretary and President, and currently is aa member of the Gold and Silver Advisory Committee for the NYMEX.