The Swiss marked the millennium with their own May Day revolution. In a low-key funeral, they finally laid to rest the Gold Standard. Barely were the rites concluded and they will read, however, then they began to sell off their golden legacy. How did they get to this point? And where next?

There are two stories - one the sensational, and the other the real. At times they overlap. Often, they've been quite distinct . )

For headline writers, the irresistible theme was Nazi gold. Charges that Switzerland had not only kept the gold of World War II refugees but also bought bullion from the Axis powers were confirmed by US State Department archives in 1996. The consequent storm, Switzerland's worst foreign relations crisis in half a century, demanded dramatic measures. On 5 March 1997, the Swiss President announced a Foundation for Solidarity with the victim s of humanitarian disasters, including the Holocaust. With a nice irony, finance would come from a Sfr7bn raid on the nation's mighty gold reserves. That Switzerland of all countries should use its heritage for anything other than classic monetary purposes was, for the gold market, beyond fantasy. The price immediately plunged. It crashed again when the Finance Ministry) suggested, a couple of days later, that the Solidarity Foundation was only one possible beneficiary. Change gathered pace. The long-overdue constitutional overhaul was approved by popular referendum last year. Laws allowing the Swiss National Bank (SNB) to trade gold at market prices came into effect May 1. The Bank was free to sell for the first time in nearly 30 years, and promptly did s~; But in sharp contrast to the damage of three years ago, prices have shown only the tiniest after-shocks. Was it all a passing storm? Small avalanche in the Alps, not many hurt?

Let's look at reality. Fate struck its first blow in August 1971, when the Americans pulled up the drawbridge at Fort Knox and suspended dollar convertibility. The IMF shepherded in a brave new world in which gold was formally demonetised - except in Switzer land, which remained a happy haven of tradition. Its active neutrality kept Switzerland out of many international institutions, not least the IMF, so it retained strong links between gold and currency.

The End of History pointed, however, to an end to glorious isolation. In 1992 Switzerland signed up for the Fund, implicitly accepting its austere views on gold. Ironically, with almost 2,600 tonnes of gold, the world's fourth largest central bank stock, Switzerland was marching into the new world order extraordinarily well endowed.

But just how well-endowed should it be? In 1997 an Expert Group of advisors devised an arcane formula based on the short -term external liabilities of Switzerland's commercial banks. To guarantee these, the Group reckoned the SNB needed gold reserves of just Sfr10.7bn. The key proposal was a revaluation of" the gold from its historic worth of just under Sfr5,000/kilo ($87/oz today) to Sfr9,000/kilo ($170/oz), raising its book value to SFr23.3bn.

This clearly left a surplus of Sfr12.6bn, equivalent to 1,400 tonnes of gold. This would, in the prosaic but terrifying words crashed again when the measures. of" the Group, be declared excess and "available for other purposes, such as the budgetary requirements of federal and regional governments”. Since then official statements have sugared their candour. Speaking in December 1997 the Finance Minister promised "We will sell gold in homoeopathic doses", claiming that "Switzerland would never do anything without coordinating with other central banks". Was this the real moment of conception for a European central bank agreement? 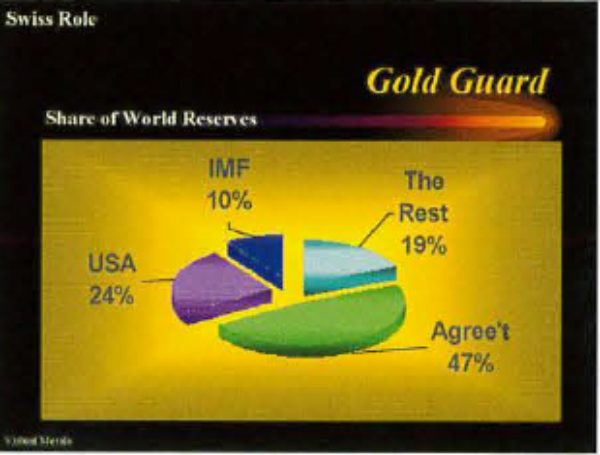 How was Switzerland's policy sold at home? Despite disquiet overusing proceeds of central bank gold for a charitable foundation, the overall policy has never triggered a popular storm. One by one, through painstaking consultation, the main constituencies in politics, institutions and the public were brought on board.

The moment of truth was last year's referendum. Cleverly, voters were offered a comprehensive package, of which proposals for the central bank were just one small feature. Opponents of gold sales set great store by the conservative Swiss People's Party (SVP), now a member of the coalition government. While the SVP has been hostile to funding the Solidarity Foundation From SNB gold, however, it has not opposed sales, which benefits its pet causes, such as the war generation of pensioners.

An important governmentally has been the SNB itself'. Here the Swiss story offers a salutary contrast to the fiasco in Germany three years ago. A scheme to revalue the Bundesbank reserves and pay a special dividend to the Finance Ministry, thereby putting Germany's debt positions in good shape for EMU membership, was seen off in short order by the bank's redoubtable president, Hans Tietmeyer.

More recently, we've seen echoes of the German story in a French government plot to raid the gold reserves for pensions funding. Th at the gold may not actually belong to it didn't inhibit a stern denial from the great and glorious Banque de France. 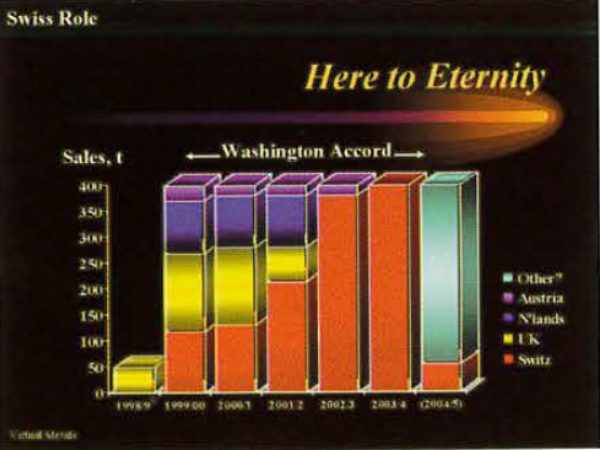 The gold business has not quite been flooded by central bank sales. But adding 40% to the 3,500 tonnes sold over the past decade was always going to be a challenge for the Swiss. There is now, of course, a broad dimensional framework. It's the European central bank agreement to bring order to central bank sales. How do the Swiss fit in?

The British got 50 tonnes out ahead of the pack, but have to fit another 365t into the frame. The Dutch have a 300t quota, with 100t already sold and probably another 100t in each of the next two years. The Austrians are throwing 90t into the pool, 30t in the first year and perhaps another 20t/year over the next three years. Th at leaves room for 1,245 tonnes from anyone else. So, Switzerland 's programme will have to roll on beyond the agreement's end.

When does the Swiss gold come to market? The Euro gold sales season runs October - September. The Swiss have confirmed we'll see 120 tonnes this season - an average six-tonnes a week, though they'll no doubt sell into strength and step back from weakness. Next season the rate has to drop as there's room for only 130 tonnes over 12 months. The following year there should be room for 215 tonnes, and the year after that 380 tonnes. The final year of the agreement could allow the Full 400 tonnes from Switzerland. And the three months following the agreement has to take care of the last 55 tonnes.

Many Roads, One Destination

What kind of sales routes are available?

What lies beyond Switzer land's current programme? A National Bank official has said that the reserves remaining after the forthcoming sales would naturally be retained, but he added, "I have to concede it is difficult to operate rational portfolio arguments with gold". It's inescapable that even after the sale of 1,300 tonnes the Swiss will remain a gold heavyweight, with as much as the Belgians before they began their sales in 1989. There could, surely, one day be more.

This is not just a matter of citing Belgium. Go back to the blueprint devised by that studious Expert Group in 1997. Their formula gave the National Bank a gold requirement of Sfr10.7bn. Even revaluing the gold way below market price (at $170/oz) still threw up a large excess. At today's values, Sfr10.7bn translates into a reserve requirement of less than 750 tonnes, and the excess becomes more than 1,800 tonnes.

What's the market's verdict so far? In theory, it should all be in the price - a price that inevitably bears scars. Tallying up the moves prompted by developments since the story broke - yes, even those judicious statements that were such a nice blend of candour and reassurance - we reckon the announcements from Switzerland have exacted a total penalty of $50/oz.

Reaction to actual sales has been a different story and provided the European central bank agreement holds they seem set fair to remain low -key events. As significant as immediate price developments, however, is the demonstration effect of what the Swiss are doing. That stand s every chance of being seen as a rational, well-planned and very well managed response to an inexorable long-term change in the international financial system. Other countries will certainly be watching closely.

Whether there is room for another gradualist approach like that of Switzerland among the retired heavyweights of the Gold Standard is, however, very much a matter of conjecture.