All that glistens is not gold. Especially in Chinese jewellery shop s these days. It's increasingly likely to be platinum. Chinese demand for the white metal has soared over the past few years to levels no one could have predicted a few years ago. In 1993, China consumed 15,000 ounces of platinum, only 1% of the world 's total demand, far behind Japan, the US and Europe. By last year, they had become the second-largest consumer, accounting for some 950,000 ounces 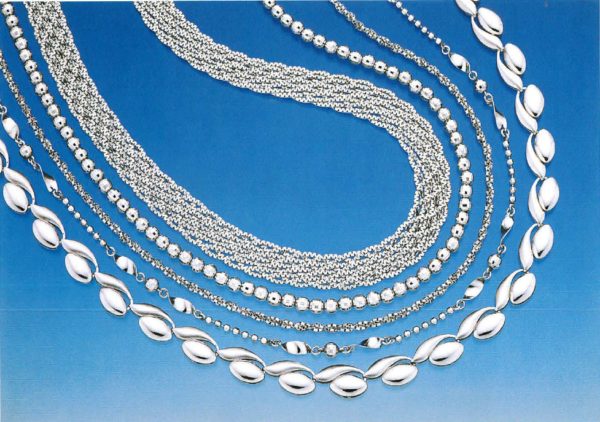 But Platinum is a Diamond's Best Friend

The modern-day origins of China's fascination with platinum jewellery began in the early 1990s as the popularity of diamonds began to increase.

Most of the diamonds being sold at the time tended to be fairly small and would have been swamped in high-carat yellow gold were used in the settings. Jewellers decided it would be better to set the stones in a more delicate setting using a white metal that wouldn't taint the colour of the diamond.

But which white metal? Silver had never been very popular in China. There was white gold, but the alloy used in making gold 'white' actually resulted in a pale straw-coloured metal. Usually, it was then plated with rhodium to give it a white appearance, but eventually, the plating will wear off, which goes against the Chinese preference for pure metal.

Another possibility was platinum, for which the Chinese characters used by consumers - bai jin - actually mean 'white gold'. In 1994, Johnson Matthey began to investigate the potential of promoting platinum jewellery in China by taking advantage of the popularity of diamonds. The campaign began in Shanghai - the 'Paris of the East' - often the launching point for new fashions, from where it spread to Beijing. Leaflets were produced describing the benefits or platinum, the pure white metal: rarer, stronger, more expensive and therefore more precious than gold. 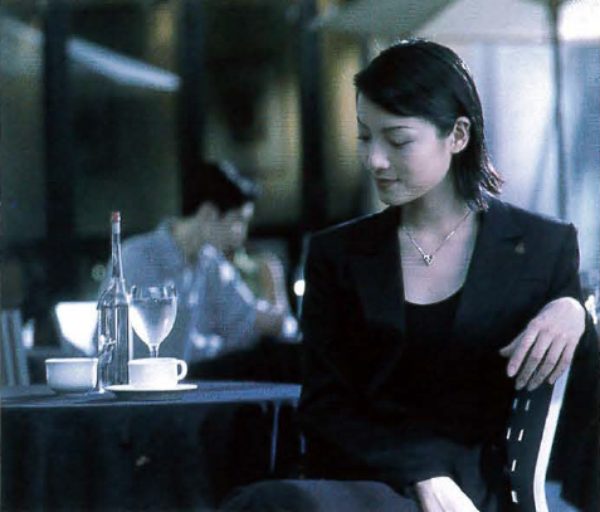 The rest of the platinum industry soon took up Johnson Matthey's lead. "Often when a market takes off, it's driven by more and more consumers wanting a certain item. In China, though, it wasn't only the consumers who helped move the market forward. The trade was happy to help promote platinum" notes James Courage, Chief Executive Officer for the Platinum Guild International (PGI), a marketing organisation sponsored by the main South African platinum producers.

The reason? Platinum jewellery had a key advantage over plain gold jewellery for them: the government did not fix its price. There were also lower restrictions on importing it and selling it at retail. That meant fewer barriers for the manufacturing and retail trades and potentially wider profit margins. Some of those profit margins were ploughed back into upgrading equipment, and the quality of pieces produced began to improve, thus further increasing consumer interest.

If the market was to continue to develop, a dedicated and focused marketing campaign was needed. PGI launched a consumer advertising campaign on television in the autumn of 1997 in the key cities of Shanghai and Beijing. Aimed at the 20-40 year -old generation, the theme linked platinum with elegance. The idea caught on with the younger generation, which began lo sec yellow gold as old -fashioned, the metal their parents and grandparents had bought. Platinum became 'their' metal.

Tourists from other parts of China visiting Shanghai and Beijing were attracted to the new white metal on sale in the local jewellery shops. They took their purchases back home, attracting the attention of their friends and relatives. The trend began to spread to some of the secondary cities. PGI's marketing campaign was extended to four additional cities - Hangzhou, Shenyang, Nanjing and Dalian - with print and television advertisements, as well as trade education and point-of-sale material, all designed to give the consumer a better understanding of the metal.

While the level of personal wealth in China is growing, it’s still lower than in many of the other platinum markets. Not everyone can afford a diamond, even a small one. More and more non-gem pieces have been produced, some with diamond-cut facetted surfaces that add low-cost sparkle. Today 80% of the market is in metal-only pieces, with many items comparable in price to a pair of imp or ted top-brand sunglasses still an important purchase for a young Chinese consumer.

No one could have predicted just how explosive the growth in demand would become. In 1998, the Chinese consumed 620,000 ounces. And last year, according to Johnson Matthey's recently published Platinum 2000, China was the second-largest consumer behind only Japan and consumed a total of 950,000 ounces - an increase of 53% over the previous year.

A large-scale manufacturing centre became established in the area of Shenzhen, prodding a well-priced source of products for smaller wholesale jewellers. There are now ten very large manufacturers in the region. Jewellers make periodic excursions there to make their selections, armed with plenty of cash and content to stay in the region for a few days while their jewellery is finished.

The consumer is well protected in China. Each piece of jewellery has a label attached containing a total of 9 pieces of information - including the price, the type of jewellery, the labour charge and the manufacturer. The platinum jewellery sold is mostly 90% pure, with the other 10% traditionally consisting of palladium. As the palladium price has risen recently the metal has been thrifted and other metals, such as copper and cobalt have been added to the mix. From the summer, the government is expected to pass a standard for alloys that will set a minimum content of platinum and palladium combined at 95% and will limit the use of some base metals to ensure better quality.

PGI together with Johnson Matthey established the Pt mark, which is stamped into every piece of jewellery sold. The consumer tends to view the 'Pt 900' stamp as a brand mark - not so much an indication of the percentage of platinum in the piece as an indication that the piece is 'pure' platinum. 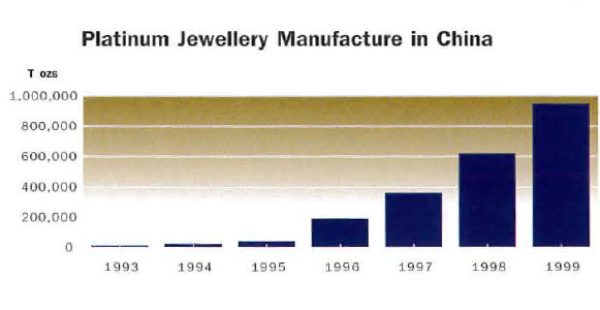 What Goes Up - Must Be Prices

"The retailers ' mentality leans towards fixed prices," notes Neill Swan, sales and marketing manager for Johnson Matt hey. "They don't like wide fluctuations. Even if the wholesale price rises, they are reluctant to change their retail prices their first reaction is to hold out for a price correction." Generally, the price has fallen hack from time to time, but the recent rally has left little respite for the buyers.

In fact, the base price for platinum varies from one location to another. In Shanghai, the price is set by a Price Adjustment Committee, which has prominent retailers and manufacturers among its members. As platinum sales have become more and more important to them, and as the price has risen, they have pushed for price increases. While the price had remained unchanged for the past ten years, it has had to rise twice in the past three months. It now stands at 198 renminbi (RMB) per gram, equivalent to about $23.50g ram or $730 per ounce. In Beijing, however, there is more of a free market and more completion - and the price is considerably lower, above 158 RMB/gram

Will higher prices dampen the consumer's enthusiasm? "What isn't fully tested is whether there is a ceiling to the price," says James Courage. "We don't really know how the market will react to a sustained period of high prices."

High prices may not be a deterrent to all buyers, though. While for some, it may push platinum out of reach, for wealthier consumers it may actually increase the metal's appeal. "The fact that it is a more page 12 expensive metal might make it that much more attractive to wear. Platinum's relative scarcity and still small market size - compare d to gold - add to the metal's allure, because it allows platinum jewellery to be marketed as something that not everyone else has. It plays perhaps to the consumer's sense of one-upmanship," says Kevin Crisp, precious metals strategist with Credit Suisse First Boston.

Is the Chinese consumer's apparent fascination with platinum a brief fling or a lasting relationship? "The platinum jewellery market in China is a very young one and continued growth is dependent on several factors," says Neill Swan. "It needs the Chinese economy to continue to grow and with it consumer wealth. The trend for more and more consumers preferring white metal has to continue - something which the platinum industry is working hard to ensure. And it needs jewellery manufacturers and retailers to continue making profits on platinum - something that depends heavily on the international metal price and consumers' willingness to pay. The market has made excellent progress in recent years, however, and if these factors do continue, China may well overtake Japan as the number one market within the next few years."