The performance of gold in major currencies from January 1999. The remarkable strength of the USD this year has overpowered most other currencies, causing alarm, and more recent intervention on behalf of the beleaguered EUR. This paper attempts to demonstrate that the strength of the dollar has led to weakness in the gold price denominated in USD. 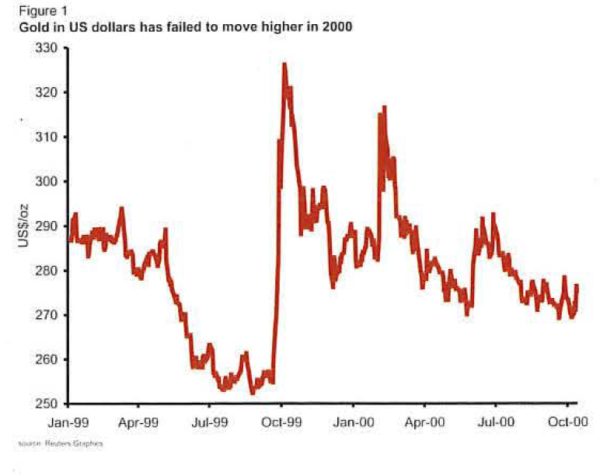 Gold ended 1999 on a relatively high note after the announcement from the European central banks that they would limit sales and lending. However, subsequently, the new millennium has been rather disappointing for gold, so far at least. Sentiment, as reflected by the gold price, peaked in February with the announcement from a number of producers that they would limit their hedging activities this year. Since then, however, the gold price has slid lower and has failed to get above US$280/oz since late July. Gold's uninspiring US dollar performance is shown in Fig 1.

This performance seems counter­intuitive based on the supply/ demand balance in the gold market. The key elements are summarised below;

Supply has been constrained by the following factors

Demand has been lower than forecast, but there is still positive growth 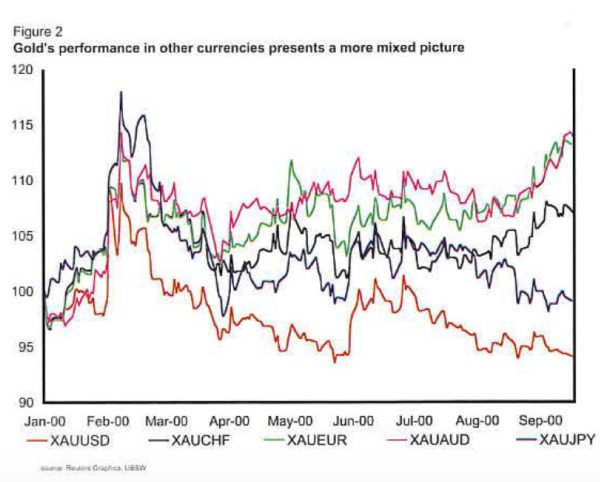 Overall, we expect that identifiable supply should exceed identifiable demand by some 400 tonnes this year. Why then has the gold price not rallied? The answer is that it has, but not in US dollars. Fig 2 at right, shows the price of gold in a number of major currencies, since the beginning of the year and indexed to 100.

Is the performance of gold in these currencies important? Conventional wisdom indicates that it is, as US dollar strength is often used as the reason that gold has come under pressure in a market commentary. Although the US economy is by far the largest economy in the world, it is neither the most important producer nor consumer of gold. Fig 3 below shows the proportion of gold production and consumption in US dollars and in other currencies. This calculation includes not only the USA but also countries that have pegged or maintain a tight trading range between their currencies and the USD.

Approximately 20% of both production and consumption are either in US dollars or in currencies that are for now, closely linked to the dollar. The balance of the supply and demand is spread between many diverse currencies. The conclusion from this is that although the interbank gold market trades gold in USD, the price in other currencies is an important driver of the gold price.

We see moves in the foreign exchange market impacting on the gold price in a number of ways. Some of these issues are discussed below : 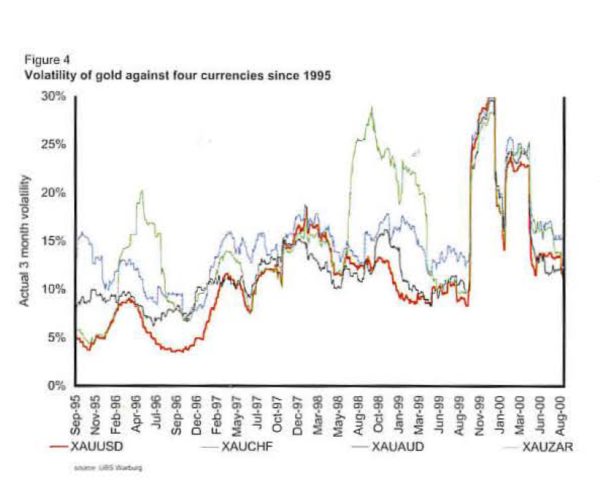 A strong US dollar impacts on supply and demand in the following manner:

Although this list is incomplete, it does illustrate the point quite well. Over the five-year period, the average volatility of the XAUUSD cross is 10.1%, lower than the other three gold currency crosses, but as the chart above shows, there have been distinct periods when the volatility of XAULISD has been higher than that of other crosses. Most obviously, the XALIAUD has been noticeably and sustainably lower between January and September 1998 and July and September 2000. In both cases the LIS dollar gold price was soft and the AUD gold price firm, an attractive set of circumstances. Based on relative volatilities, gold does not appear to have been correlated with other currencies above for any length of time, although there has been a shorter period when the volatilities of gold in Swiss francs and rands have equalled that of US dollar gold. During these periods it can be argued that the gold price was being determined as much by the Swiss franc and rand price as it was the dollar price.

(expressed as a percentage)

This indicates that during the observation period for the above exercise, May through September 2000, moves in dollar gold were closely associated with moves in the AUD. The smallest relationship in this sample during this period is with the JPY. We have also examined this relationship over longer periods with changes measured on a daily and weekly basis. There appears to be a positive relationship, sometimes strong, sometimes weak, but in almost all cases present. In the interest of brevity, we cannot show these results but they are available on request.

We have attempted to show that although gold is strong in USD, there is an identifiable relationship between moves in the dollar gold price and moves in certain important currencies. The conclusion to this work is that part of the reason that the performance of the gold price has been disappointing since February 2000 is due to the strength or the USD. Once this strength is sustainably reversed, we believe that a period of US dollar weakness will allow the US dollar gold price to increase. To the end of 2001, UBS Warburg forecasts that the USD will weaken from current levels by around 12%, as expressed by the arithmetic average of our forecasts for the five major currency crosses in the table above. Perhaps more importantly, we forecast that the AUD will appreciate by more than 17 % from current levels. This weakness in the USD and the strength in the AUD will be very supportive for gold.