Diggers & Scrapers: The Outlook for Mine Production

Global gold mine production increased steadily for many years following the surge in gold prices in the late 1970s and early 1980s. The expansion in world output was particularly strong in the 1980s: in the period 1981 to 1990, GFMS estimates that gold production increased by an average of 6% per year, exceeding 2,000 tonnes for the first time in 1989 (see Figure 1).

During the following decade, growth slowed markedly. 1996 and 1997 were the only years in the 1990 s which saw gold output increase significantly year-on-year (by 91 tonnes and 119 tonnes, respectively), with an average annual growth rate during this period of less than 2%. By the end of the decade, growth had all but disappeared from the gold mining industry; and last year, production actually declined, albeit only marginally (global output was down 2 tonnes on 1999's levels).

Does last year's small drop indicate a new declining trend in global gold production, with obvious implications for the supply-demand fundamentals of a market under pressure? In order to establish this, the reasons for the decline need to be considered closely, before assessing their likely impact on future output. 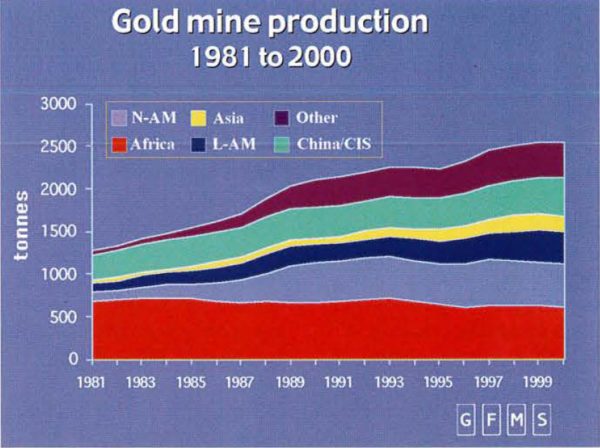 As was mentioned above, the decline in mine production during 2000 was barely noticeable, but it did represent the first time since 1995 that mine production did not grow. Figure 2 illustrates how production fell in most of the gold-producing regions of the world, with the noticeable and strong exceptions of China and the countries constituting the CIS.

Factors impacting on mine production last year can be broadly divided into problems of a temporary or short-term nature, which would, not necessarily continue to affect production much in future, and longer-term trends which may have a real influence on global output going forward. Chief among these long-term factors is the low gold price. Nar rowing margins have resulted in a large number of closures of higher­ cost mines, while several smaller producers have been forced into liquidation, often resulting in further closures. The need to conserve cash has also seen exploration expenditure levels plummet, which, combined with a revaluation of reserves based on lower longer-term price projections, have led to a significant decline .in undeveloped reserves. 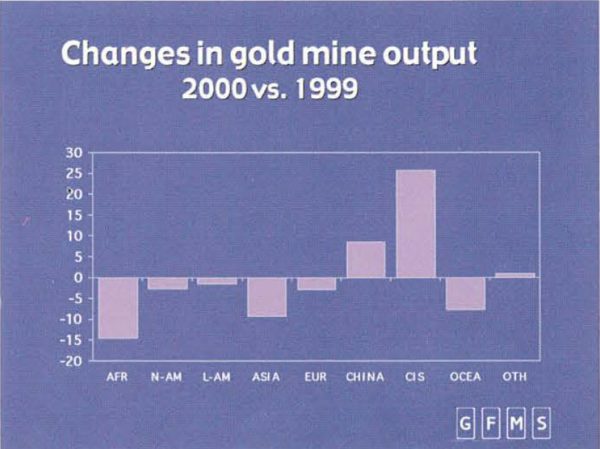 Mine-specific operational problems of various kinds had a significant impact on production last year. South African output was particularly affected, falling for the sixth year in succession, by just over 20 tonnes. To name but a few examples of mines that experienced operational difficulties, seismic events affected output at the Vaal River and West Wits operations and the ageing infrastructure at Kopanang caused an increase in breakdowns. Elsewhere in Africa, Ghana reported a drop of just under 3% in full-year production, partly due to a pit wall failure at the Obuasi mine, with the result that surface operations there came to an end. Though overall production in Mali increased last year by more than 10%, the Syama mine delivered disappointing results due to power problems and a collapsed sidewall; owners Randgold Resources have subsequently announced the suspension of operations at the mine. A rock burst at the Camp bell mine in Canada and backfill flooding at the Bronzewing mine in Australia were among the many other cases of mines that experienced operational problems last year.

Though usually short-term in nature, operational obstacles often arise from more long ­ lasting problems, the most obvious being a lack of sufficient capital investment in maintaining and upgrading infrastructure, equipment and facilities due to the constraints imposed by sustained low prices. A weak gold price environment could, therefore, see more mines experiencing operational difficulties which could impact on future production. 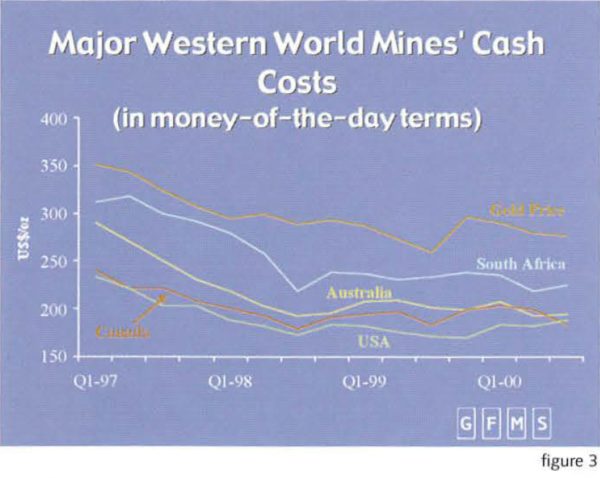 Several mines also reported lower grades last year. Among the hardest-hit was Grasberg in Indonesia, the largest single gold-producing mine in the world. Lower gold grades at Grasberg resulted in significant reductions in output for the first half of the year, and while grades recovered markedly in the last quarter, the full-year output was still clown close to 20 tonnes. Partly as a result of this, Indonesia's gold output in 2000 dropped 14% year-on­ year, following on a number of years of continuous growth. Lower grades also plagued Argentina's biggest gold producer, Bajo de la Alumbrcra; the second largest mine in Australia, Granny Smith; the Lihir mine in PNG; US operations Cortez and Meikle and several others.

For many mines, lower grades are purely a function of the characteristics of an orebody, incorporated into the mine plan from the start and temporary in nature. But lower g rad es could also be the result of forced high-grading or inadequate development work, which eventually may make it difficult to access the higher­ grade ore. These are problems that could affect output in the longer term as well.

Other temporary circumstances which impacted on output in 2000 identified by GFMS include political instability, which affected mines in Zimbabwe, Indonesia, Fiji and the Solomon Islands, and extreme weather conditions, particularly in the first half. Heavy rain and flooding during the summer months in the southern hemisphere affected mines in Australia, South Africa and Zimbabwe, while harsh winter weather in Central Asia and China reduced operating flexibility and resulted in lower output in several gold mining regions.

In the face of all these problems, it is actually somewhat surprising that production did not decline more. GFMS suggests that the reasons for this include strong performance in Russia and China. Reports imply that Russian gold production surged ahead in 2000, with an estimated 16% increase taking the country's output to 160 tonnes for the year. If the past two years' momentum is maintained, Russia is poised to overtake both China and Canada to become the fourth-largest gold producer in the world. The healthy performance of the local industry owes much to the fast and seemingly efficient development of the mining finance infrastructure in the country, particularly after the economic crisis of 1998. In China, GFMS estimates that output increased by almost nine tonnes or 6%, due in part to the attractive premium over international prices that could be obtained through most of the year by selling mine output to the People's Bank at the official purchasing price. 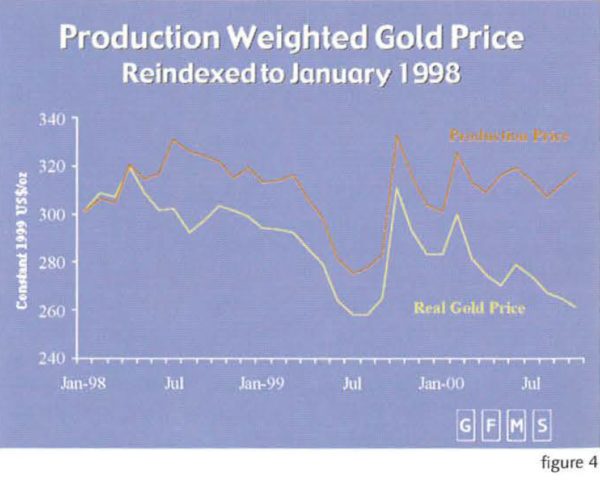 A further contributor to virtually unchanged production levels "as the fact that, on average, miners managed to contain their production costs, at least during the first nine months (average full-year production figures have not yet been published). Total cash costs of production averaged less than $190/oz in both the second and the third quarters (see Figure 3). This was achieved despite the fact that lo we r grades and reduced output at many operations put pressure on operating costs. Much of the cost containment was made possible by significant currency weakness in South Africa and Australia last year. Both countries say their currencies plummet to record lows against the US dollar, resulting in US­ dollar-denominated costs remaining low even though local costs may have increased. Local prices, too, increased: Figure 4 illustrates how the production­ weighted price calculated by GFMS has been outperforming the actual gold price.

As is clear from the above, many of the factors contributing to marginally lower output in 2000 could be regarded as temporary. At the same time, whilst a large number of mines are in the process of winding down mining operations, processing the remaining stockpiled ore or leaching the last gold following earlier suspension of mining, several other mines are expanding and increasing output. And even in today's enormously challenging operating environment, there are still new mines starting up. Last year's crop of new mines, listed in the table below, could add as much as 55 tonnes to "oriel output once they reach full capacity. Weighted average cash costs for these new mines will be around $126/oz.

A further 54 tonnes of potential new capacity is expected to be brought on stream during the course of 2001. On the other hand, operations ceased or were suspended at no less than 16 mines last year (representing around 48 tonnes of production capacity, phased out over a number of years), and a fur the r six mines are currently slated for closure during 2001, affecting another 27 tonnes of capacity.

In the short term, GFMS anticipates that production will continue to perform strongly, with an estimated 22-tonne increase year-on-year in the first half of 2001. This forecast is based on an expectation of recovery at many mines that experienced operational difficulties last year; continued cost containment, partly assisted by currency weakness; further strong performances in Russia and China; and successful commissioning of the substantial volume of new mine could being brought onstream this year.

However, there can be no doubt that the longer-term factors discussed throughout this article will continue to put enormous pressure on existing gold mines. Combined with the almost complete absence of new projects which look feasible at today's gold prices, it would seem increasingly unlikely that global mine production levels could be maintained in the longer term.