Is a mining company today better off buying a ready-made project - or spending money exploring for one? Every CEO in the business asks himself this question at every annual planning meeting. Each company ends up with a different answer based mainly on their real or perceived strength. There's no right or wrong answer - in the end, what matters most is whether or not the company can create shareholder value using its various approaches. 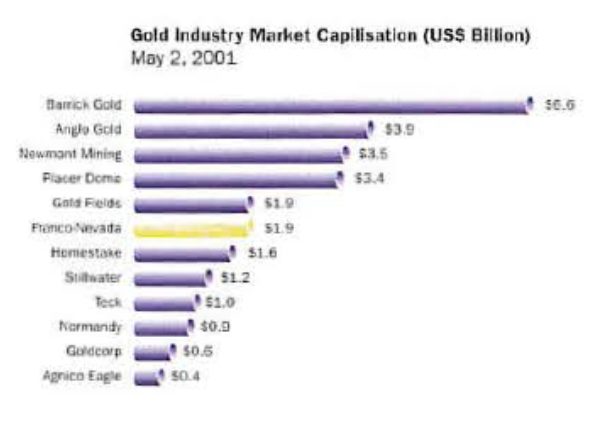 There is a very strong case to be made for mergers. The mining industry on a global basis is undergoing the same sort of consolidation that has been happening in other industries such as banking or oil and gas. In the base metal industry, names like Rio Algom, Asarco, Cyprus, Alamax, Reynolds and North have all disappeared in the last 18 months. What is emerging are three large companies - RTZ, Anglo-American and BHP-Billiton which have market capitalisation of over US$25B, dwarfing the rest of the industry. 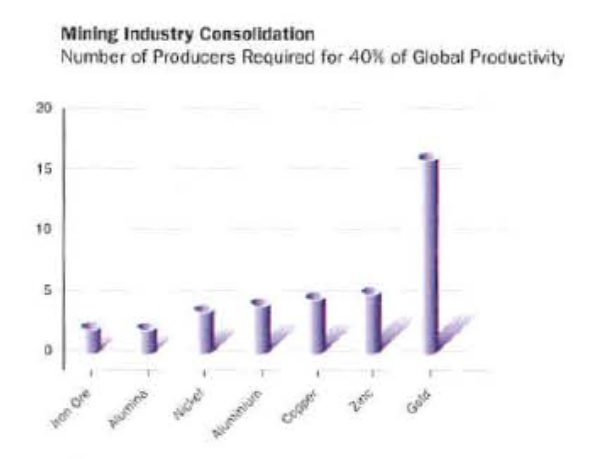 Looking at individual metals, it becomes clear that, globally, each commodity is becoming increasingly dominated by just a handful of producers. Interestingly, the returns generated by the various metals seem to be directly proportional to the number of participants. The one commodity that seems to be crying out for consolidation is gold. It takes more than 17 participants operating dozens of mines to produce about 40 per cent of the world's gold production. 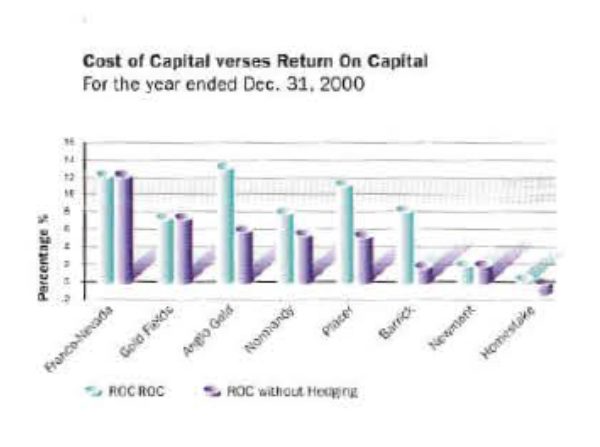 The consequences of this fragmentation can be vividly seen in the poor rate of return achieved by the various participants. The average cost of capital in our industry is ten per cent. It fluctuates between nine per cent for companies with the pristine balance sheets and high margins, for example, Franco-Nevada, to 12 per cent for the more leveraged companies. Looking at last year's results at a time when gold averaged US$280, and removing the hedge gains for those who have used them, not one single company apart from Franco-Nevada never came close to its cost of capital. In plain English, for every ounce these companies produced, they destroyed shareholder value! At today's gold price of US$ 265, this destruction or value is simply accelerating. While the hedgers seem to be doing better, in reality, their gains are financial and just mask the poor returns of their mining assets. 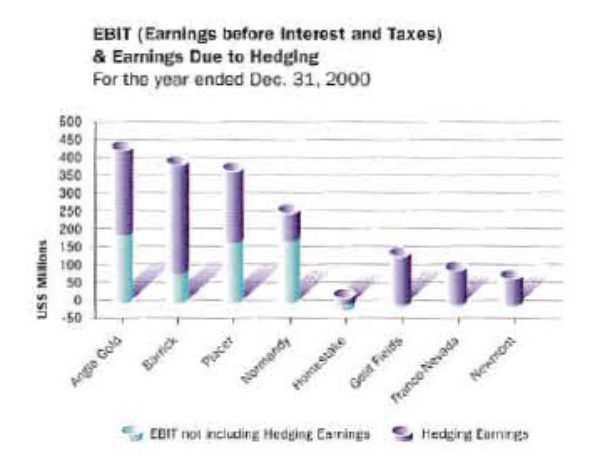 The picture is even clearer when you look at the earnings of these companies and separate out the hedge gains. The top three companies have now become financial companies making more money managing the float on their hedge book than on mining!

How you manage your company at US$375 gold is quite a bit different than al US$265 gold. The simple truth is that the over-enthusiasm of the 80's when gold was over US$400 an ounce led to an unprecedented investment boom that has left us with painful legacies. In the last five years, US$4.3billion, or approximately 20 per cent of this industry's book value has been written ­off. If most companies calculated reserves at today's gold price of US$265 versus the US$300 an ounce currently used, there would be a lot more write-downs. 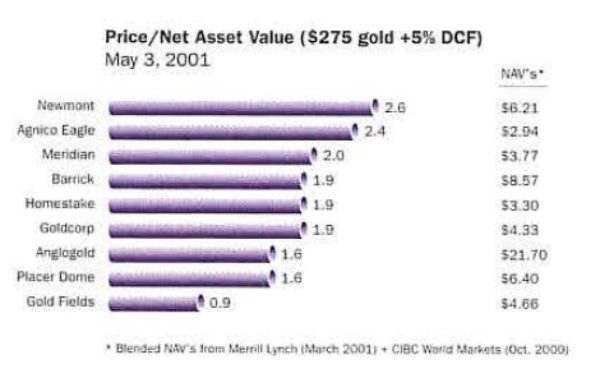 If it's difficult to make a decent return on your existing assets at the current gold price, you can already guess that it's nearly impossible to do so when you have to purchase them, more often than not, al a premium to their value.

The best way to illustrate the acquisition dilemma in today 's gold price environment is with examples, shown in the table below the five acquisitions or mergers shown are the latest done in the gold industry - and it is noteworthy that none of these have a value of more than US$500M. The two projects that have so far shown the best upside in terms of exploration success arc Homestake Mining's Varadero and Barrick's Bulyanhulu. 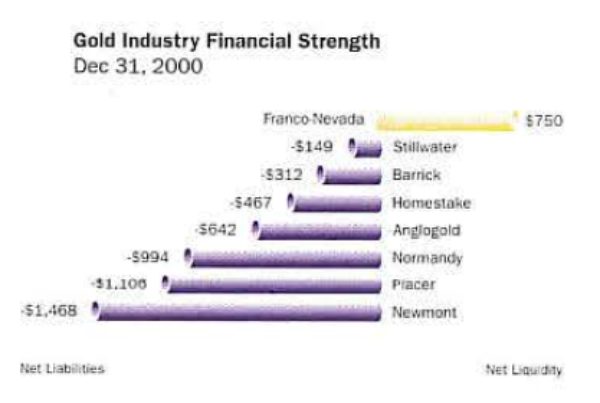 Yet, at US$270 an ounce gold, these projects in their present form will only have paybacks of capital in the 13- to 14-year range and return on capital in the very low single digits. At those levels of return, management has a tendency to look at the acquisition costs as sunk costs, which means that they do not include them in the calculation of returns, They then write-off the asset and justify construction on the capital to be invested alone. Of course, if you do that too many times, guess what - you go broke or you devalue your share price 'if' you've used your paper as acquisition currency!

The table is also a good indication of why it is so difficult for consolidation of the industry to carry on at these low gold prices. Unless you can buy the assets for a nominal amount, it is nearly impossible to make any money. 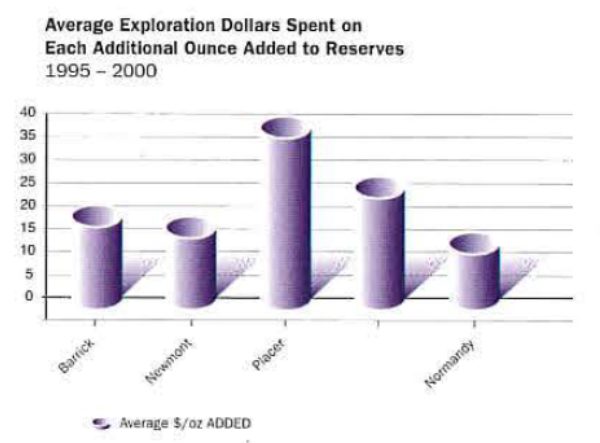 The asset price dilemma can readily be seen by comparing the current share price of the nine largest gold companies to their net asset value using US$275 gold and five per cent discounted cash flow. The premiums range from a high of 2.6 times for Newmont to low of 0.9 times for Gold Fields with an average of over two times for the lot.

Another way to look at the current share price using the same five per cent discounted cash flow is that it's discounting a US$325 gold price. In effect, the public is willing to pay on average double what a stock is worth in the hope that gold will rise to US$325 in the short term. Hope springs eternal!

This is all the more surprising given that we've been in a 21-year bear market, the last four of which have been brutal. Managements have had painful lessons inflicted on them by the slowly eroding gold price and on the whole, have become gun shy. In the face of stock valuations that arc twice what they're worth, we would think that management would use their paper as currency to purchase some of the junior or intermediate companies that have reasonable valuation.

So far, I've only talked about acquisitions. It's been shown that 80% of all acquisitions are beneficial to the vendors only. Is exploration a better way to grow?

To establish a level playing field, I looked at the average exploration dollars required to add each new ounce of gold reserves over the last five years by the largest gold companies. I used their entire exploration budget for each year, not differentiating between grass-root or greenfield (exploration carried out in an area that has never been explored before) and head frame or brownfield exploration (exploration done around existing facilities). If a company purchased reserves in any one year - such as Barrick al Bulyanhulu - I did not add this cost to the ounces.

The best results are from Barrick, Newmont and Normandy, which is also the most efficient at US$ 12.50 per new ounce. These three companies concentrate their exploration budgets around their existing mines and - because of their large landholdings within the most prolific gold belts - they have superior results.

Placer's US$37 per ounce is by far the highest and reflects the withdrawal of reserve ounces from La Christina in Venezuela and the downgrading of Getchell ounces from reserves (ounces in the ground that have been economically engineered and are known to be profitable at current prices) to resources (ounces in the ground from a geological standpoint but which have not had economic parameters define their worth). If these ounces are added to an existing mine with its entire infrastructure in place, they are likely to be very economic. However, if they form part of a new deposit, they are likely to be economic only if the total costs do not exceed US$225 per ounce. That would have to include operating costs, capital costs, sustaining costs, exploration and overhead. Given that on average the latter four costs centres add up to about US$90 per ounce, it means that a project would have to have cash operating costs of US$135 per ounce or better to be economic in today's gold price environment. There aren't too many of these mines found in a decade, and there is the rub.

Even though the exploration ounces are Likely to be cheaper than the bought ounces, their timing, i.e., their discovery, is unpredictable. Echo Bay and Battle Mountain, for example, have spent years and enormous amounts of money without ever finding a world-class deposit. You can be as good, as efficient and as smart as anyone and, yet, if luck is not smiling on you, it can be for naught.

As mentioned earlier, there are no easy or right or wrong answers to the question of acquisition versus exploration. What is clear, though, is that at US$270 an ounce, neither choice is likely to give a satisfactory rate of return. Th.is is not a matter of "in the long run", as there will be no long run for most gold mining companies if the gold price stays at these levels for another five years.

Before the industry thinks of growth, its first matter of business should be to return to a level of profitability that will give shareholders a reason to own these stocks.