Fit for Business: Five Years After Bre-X, How is the Industry Shaping Up?

At the time of this writing, the gold price has remained well above the psychologically significant US$300/oz level for some weeks. The last time it traded at these lofty heights for any length of time was in late 1997 – five years ago – but then it was on the way down. 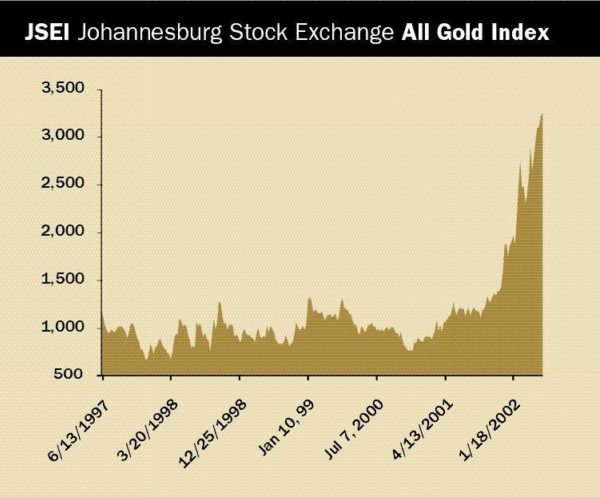 Much has happened in the world since 1997. The Spice Girls have disbanded. The US has a Republican President. The Labour Party in UK has secured a second term in government. President Mandela has retired. Hong Kong is under mainland Chinese rule. The Euro has become the currency of Europe, while the US dollar has reigned supreme. Interest rates are low, and inflation has all but disappeared. The Japanese and other Far Eastern countries have survived economic turmoil.

The events of September 11, 2001, etched in the memory of millions, have changed the world forever.

What of the gold market? How has it changed?

In the official sector, we have seen the groundbreaking agreement of central banks that went a long way toward removing supply-side uncertainty – wherein the UK sold much of its gold and the Swiss started disposing of half their reserves.

Turnover of gold (and silver) cleared through the London Bullion Market has fallen dramatically. The number of principals in the bullion market has declined with the consolidation of the banking sector and one member of the fix actually lowered its flag permanently last year. Meanwhile demand for physical gold in jewellery, especially in India, has grown, outstripping primary production growth.

So, what has happened in the gold mining industry – other than the fact that it continues to produce more each year?

The year 1997 was significant for the mining sector because it marked the height of the exploration boom and the start of the slump in the junior sector as a result of the Bre-X scandal.

Since then, the sector has not simply grown, but evolved. The most visible sign of its increasing maturity, of becoming wiser and not just older, is the consolidation that has changed the corporate landscape, certainly at the larger end. Whether it would have evolved without the economic impetus of a low gold price environment is open to debate. Possibly it would have, but perhaps not as fast as we have witnessed.

Consolidation has not only reduced the number of companies active in the winning of gold, but it has seen old, familiar names disappear – to be replaced by 21st century equivalents. Table 1 on page 16 shows the top five producers in September 1997 and during 2001.

Newmont and Barrick are at the top in 1997, although they were half the size they are now. But where were Anglogold and Gold Fields?

It may come as a shock to learn that two of today’s biggest players didn’t exist in 1997.

The ‘Great Trek’ within the South African gold mining industry to the promised land of modern organisational structures (known as the “North American model” at the time), had yet to come about, although plans were on the table at that time.

Vaal Reefs, a single-mine, multi-shaft limited company, was the vehicle that parent Anglo American used to form Anglogold. It collapsed all its South African gold mining subsidiaries into this one listed entity and renamed it Anglogold. A little later, Anglogold was able to acquire the gold assets in North and South America of Anglo American’s offshore subsidiary, Minorco, giving Anglogold immediate global presence.

Incidentally, Freegold was then a vast sprawl of shafts in South Africa’s Free State province. Today many of these mines have been discarded by Anglogold and rest with the likes of Harmony and smaller, entrepreneurial companies, and have formed the basis for black empowerment initiatives.

Harmony itself was, in 1997, still a single-lease mining company that had only recently achieved its independence from the Gencor mining house, reporting a production of no more than 700,000 oz/year. While in the intervening years Harmony has grown through acquisition to become an international company with annual production of around 2.5 Moz, Gencor’s gold assets were combined with those of Gold Fields of South Africa in 1998 to form what today is Gold Fields.

Along with consolidation, there has been an associated globalisation. Gold mining has spread to new territories, with, perhaps most notably, West and East Africa now boasting some of the best addresses in the world.

Globalisation has not, however, spawned new indigenous mining companies in the new areas. Control of an increasingly geographically diverse industry remains vested in the hands of North American, South African and Australian companies, although the latter are fast becoming an endangered species.

But apart from the structural change as patterns of production and ownership have been modified, has the industry changed operationally?

The Cost of Success

The low international gold price certainly forced companies to focus on cost reduction and to look at cutting overheads by reducing head office functions. One result: they reduced discretionary spending on exploration. And it forced them to strive for operational cost savings – within the context of the labour-intensive South African industry, this manifested itself in widespread redundancies and improvements in education and training with the aim of improving productivity.

Elsewhere, high grading, the practice of extracting ore at a higher grade than the average grade of the orebody, has been common, particularly in North America. Bizarrely, at a time when prices appear low, a number of producers have expanded output to lower unit operating costs.

The most effective way of lowering costs has proved to be to find and open a high-grade mine, and a number of companies have been successful in such disparate regions such as Peru, Chile, Canada and Mali.

Notwithstanding the effects of the exchange rate variations – more of which later – whatever way they have massaged costs, the producers have been effective in lowering the industry cost curve, although with the caveat that the longer-term effect has yet to be seen.

Certainly, the number of mines that have been forced to close is relatively small. Table 2 below shows the lowest costs from World Gold Analyst’s predecessor for the September 1997 quarter compared with today.

Rand Falls Down the Shaft

One factor that has tended to lend a flattering distortion to today’s figures is the movement of exchange rates against the US dollar. Over the last two years especially, the main producer country currencies have been particularly weak, and this had had a material effect on reported costs and revenues.

Five years ago, the South African rand was worth around 20 cents. It is now worth around 9 cents – less than half its value. This depreciation has made South African unit costs appear extremely competitive in US dollars, the international standard for cost reporting in the gold mining industry. In September 1997, average South African cash costs were US$299/oz, with Driefontein the lowest at US$234/oz. They have now come down to around US$170/oz, mostly as a result of rand depreciation.

Of course, the reverse side of the coin is that the South Africans and the Australians have benefited from improved revenues despite the lacklustre performance – until recently – of the dollar gold price.

In 1997, South African producers were receiving roughly R50,000/kg for their gold. The Australians were selling theirs for A$450/oz. Now the likes of Harmony and Gold Fields are receiving in excess of R100,000/kg (spot) and the Australians, a little less dramatically, A$575/oz (spot).

So, in fact, a number of the world’s producers are actually better off than they were five years ago. But has this been reflected in share prices?

As an overview, the performance of the biggest producers is reflected in the performance of FTSE Gold Mines index. It stands at about 1,250 at the time of this writing virtually the same as it was in October 1997 when it was free falling from over 1,800, finally bottoming out in late 2000 at around 600.

But a regional perspective demonstrates something of the disparity that exists between those regions with high local prices and those that have not felt the benefits of a weakening currency.

The Johannesburg Stock Exchange All-Gold index has soared to over 3,200 – three times what it was in September 1997.The Australian Gold index has exhibited a less dramatic increase but nevertheless, at 1,350, is still twice as high it was as towards the end of 1997. The exception is the Toronto Stock Exchange Gold & Precious Minerals index, which has not performed as well as its peers. Towards the end of 1997 it sank below 6,000 from over 11,000 earlier in that year. Lately, it has shown a modest recovery, to around 6,700 at present.

Over the last five years the gold mining industry has had to face a number of challenges that threatened to decimate it. It has shown its resilience and has adapted at an operational level to in fact grow its output.

In its efforts it has been aided by weak currencies in at least two of the major producing nations. Structurally there have been many changes. We have seen rationalisation in South Africa, willing appropriation in Australia and consolidation globally. Exploration spending has been severely curtailed and tens of millions have been wiped off company balance sheets.

Now, at last, there are signs that the junior sector is recovering. Companies with late-stage gold projects, in particular, are once again able to raise funds on the major stock markets.

It is now a more streamlined, more robust industry than it was five years ago – but is it more valuable?

In November 1997, the gold mining companies (excluding diverse mineral companies like Rio Tinto) had a collective market capitalisation of around US$41 billion. Today the comparable figure is US$58 million.

The answer is yes.

Paul Burton is Editor of World Gold, the specialist gold industry publication, a position he has held since 1996.

Prior to that, he spent almost 20 years working in the South African gold mining industry in the areas of production, mineral economics and minerals marketing.

Paul holds an MBA from the University of the Witwatersrand and an M.Sc. In Mining Engineering from the Camborne School of Mines.