The past six months have seen the execution of the two largest hedging transactions in the history of the gold market.

Ironically, this volume came from South Africa; a gold (producing region not known for its propensity to enter into the price protection programmes of such magnitude or tenure. What then prompted Gengold, in August 1995, to hedge 2.9 million ounces of metaI to finance its Beatrix developments; and JCI, during the last quarter of 1995, t0 hedge no less than 7.3 million ounces associated with the company's expansion at South Deeps, Western Areas? More importantly, do these developments imply that other transactions of similar structure and volume could be forthcoming from that region, and what does it mean for the future gold market?

The most striking characteristic common to both these transactions is the fact that they were structured to finance developmental work, and hence those involved in their design were concerned mainly with capital requirements, future cash flow projections and debt management. Therefore, unlike so much of the producer hedging emanating from North

America and Australia since the mid-1980s, there were factors other than primarily the international or local gold price, central to the decision-making. Thus, this decision to hedge almost, but not completely, divorced from the gold price, gives insights to the rationale behind the programmes and what could possibly be expected in the future.

Historically, the South African mining houses have been considered rather reluctant hedgers. Initially, activity was limited largely because the authorities curbed hedging and permission was required to enter into even the most basic of strategies. With time, however, the South African Reserve Bank recognised the growing operating and financial constraints facing the mining industry. In response, it gradually began to give the producers increasing latitude to implement more sophisticated hedging. But this was not the only factor that generated a change in hedging philosophy. 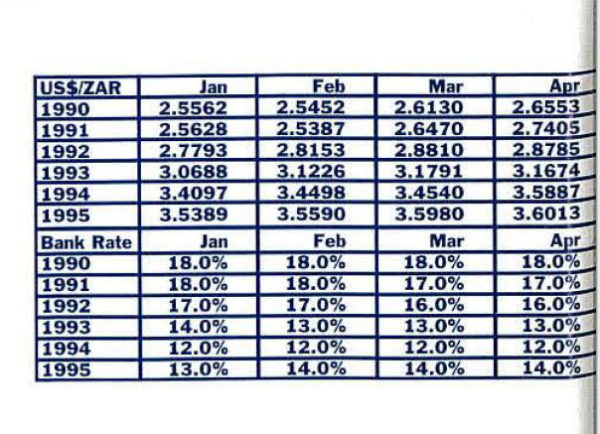 Throughout the 1980s and until the dual currency mechanism was abolished, the South African Rand depreciated against the currencies of its major trading partners. This implied that the mines enjoyed a natural priced hedge, since the vast majority of operating costs, including a massive wage bill which represented some 50%of all working costs were, and still are, paid out in Rand. Contrary to the expectations of many mark et commentators, once the Financial Rand was abolished during the first quarter of 1995, the Commercial Rand began to stabilise against the Dollar as the accompanying chart shows.

This has been due largely to massive inflows of capital into the country, but the net effect was that the mining houses found themselves no longer protected by currency-induced high local gold prices.

Even with sharply higher lease rates, therefore, the South African producers could secure a contango that can only be described as the envy of their Australian, American and Canadian mining colleagues. 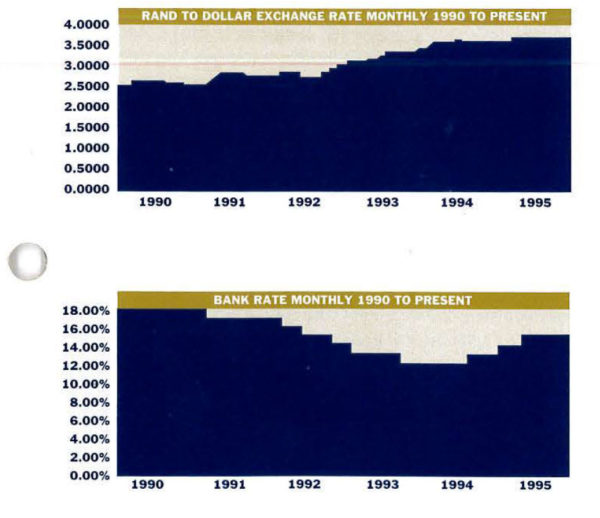 Gengold elected to forgo some of this contango with which it bought a series of options associated with the Beatrix transaction. But even with the options paid for, the company recurred a con tango of no less than 9%. JCY decide d to secure

the full contango of 10.6% for the 8.5 year transaction, which effectively pre-empted the company calling for a rights issue in order to finance the project.

A second striking characteristic is the length to which both Gengold and JC! have gone to allow the maximum participation in any upward movement in the gold price. Gengold achieved 70% while JCl sett led for at least 55%. Both were achieved via a series currency and / or metal options but demonstrate the companies' concerns relating to how shareholders perceive these strategies. Gone are the days when companies simply sold forward into a rising gold price and hence, left themselves open to criticism relating to capping a fledgling price rally or locking into a price at the expense of future appreciation.

Although considered a latecomer to the hedging market, as these two deals demonstrate, the mining industry has come a long way in terms of how it views hedging and how it ought to be done. The transactions are no longer knee jerk ones in response to a short-term price movement; they have long term operational plans at the core of their structure. Furthermore, the mining community is acutely aware of the potential reactions of both the shareholder and the market in general, and hence their willingness, and indeed their wish, to share with the market the details of the strategies.

Beatrix and Western Areas are not the only mines undergoing long term development in South Africa .

There are, and will be, others which will be subject to expansion or even merely the

need to re-finance. To consider these transactions, therefore, as once-off project specific events, not to be repeated, would be to ignore the fact that the South African mining industry is essentially a long term survivor. Financial or operational limitations that they may be currently experiencing are not at all new to the industry in general. The recent fall in South African output, compounded by the announcement that Anglo American is planning to close shafts, generated press comment to effect that the industry as a whole is on a steep decline. While we may indeed see some casualties in future months or years, are these conclusions perhaps a little too general and overstated? The counter argument is that there is simply too much in the way of infrastructure invested in that sector to discount its future, and the hedging developments of the past six months have demonstrated the industry's will not only to survive, but to do so profitably.

Jessica Cross gained a science degree from the University of the Witwatersrand before Joining the Anglo American Corporation in Johannesburg in I980. There she was trained as a commodity analyst covering the base and precious metals. In 1987, she Joined Consolidated

Gold Fields in London to work primarily on the authoritative Annual Gold Survey, but also to complete platinum research. She co-edited 1989 Gold Survey before Joining the economics department at The RTZ Corporation plc as their gold analyst.