Not Just Another War Story

Gold had a remarkable start to 2003, as prices surged to a peak of $388.50 per ounce in early February, a level not seen since August 1996.The rally was fuelled August 1996.The rally was fuelled Iraq, a weakening US dollar, stock market losses and a very positive technical picture, a combination that spurred multiyear record levels of speculative buying in New York and Tokyo. 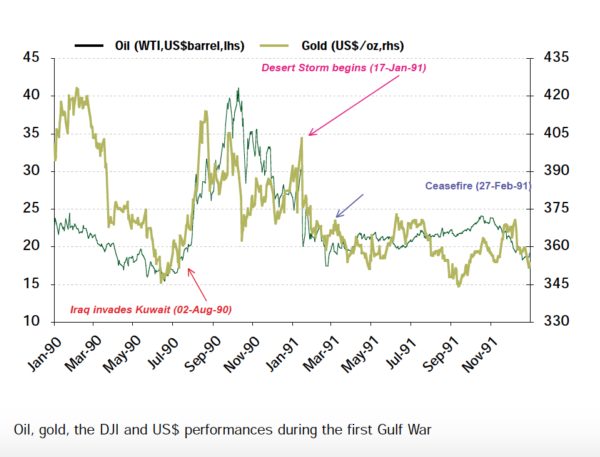 But the onset of military activities and confidence that the war would be short and successful resulted in a wave of long liquidation in gold. Since then, the constant reports regarding military developments in Iraq have become the major driver of global financial markets and, therefore, gold prices. Despite the huge uncertainty about post-war Iraq and a deluge of poor economic data, for the moment, war is everything to the markets – the ‘movie-ready’ rescue of GI Jessica had a bigger impact than the disturbingly pessimistic purchasing manager surveys!

The current conflict sparked an inevitable comparison with gold’s performance before, during and after the 1991 Gulf War, and now raises questions as to whether historical context gives any indication for what it could experience after the 2003 sequel.

After the 1991 war, gold prices continued to soften and, by the end of that year, gold was trading at around $350 per ounce – about the same level as before the Iraqi invasion of Kuwait. The US dollar, which had already been weakening before the Iraqi invasion, continued to depreciate further. And, although it briefly enjoyed a very strong rally on news cease-fire, it resumed its slide during the second half of 1991 as the US moved into recession.

US equities followed a pattern similar to the dollar. Already under pressure before the Iraqi invasion, they continued weakening during the conflict, rallied briefly once the war was over, and then stagnated for most of the balance of 1991 – largely due to the weakening US (and global) economy.

Following the current war, there will likely be a continued relief rally in equity markets and the US dollar. This, in turn, could encourage further downside pressure on gold. But the sustainability of equity market and US dollar gains will be determined by post-war economic reality, with the clear hope being that improved sentiment will feed on itself and thus sustain further gains. However, in the opinion of this writer, a short, fully successful war is not a panacea for the economic, financial and geopolitical issues currently facing the world, and the overall environment remains notably supportive for gold. 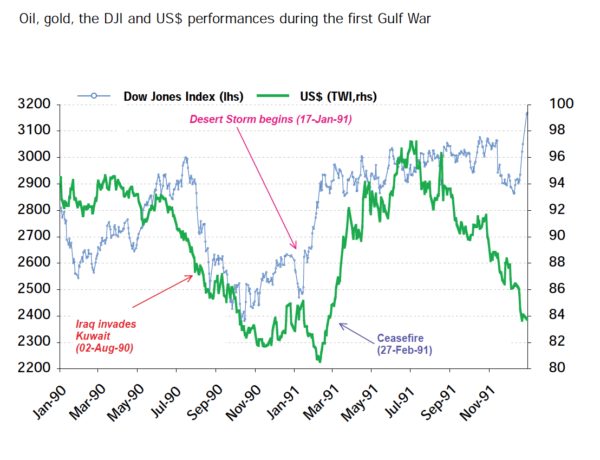 Gold has always been a difficult beast to analyse, as it is virtually a separate asset class – sitting somewhere between a commodity and a currency. One cannot quantify a "war premium" as such since, unlike oil, the "real" price of gold cannot be determined by supply/demand fundamentals. The scorecard below draws together some of the facets impacting the outlook for gold prices. 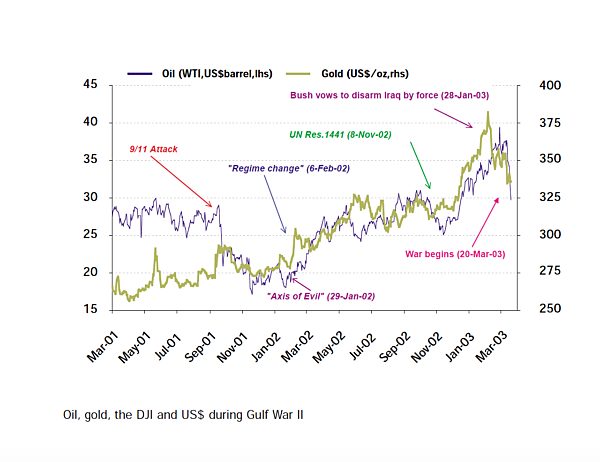 The US dollar has had a mixed history as a driver of gold prices. It was largely irrelevant during the famous 1979-80 gold rally, was the key drive of the one in 1985-87, but was only marginally supportive during the rallies in 1982-83 and 1993-96. So far during the 2001-02 gold rally, the dollar has been clearly supportive, but with legitimate concerns about the Euro Zone and Japanese economies, by how much more will the dollar depreciate?

Inflation has been the missing factor of this rally. Rising (or expectations of) inflation has traditionally been the most dependable macroeconomic variable to support a sustained rally in gold. There is no question that current inflation is at historically low levels and that this does not support gold, but there is now a wide variety of theories and inflation themes – deflation, stagflation, reflation – take your pick! 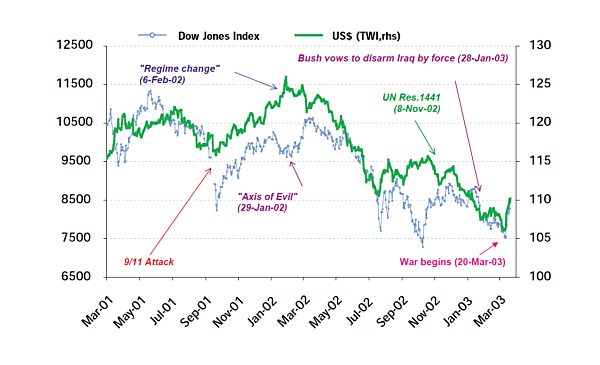 Producer de-hedging has been the most important gold-specific development since the European Central Bank Gold Agreement in 1999. Since late 2001, many gold producers announced – and followed – plans to deliver into existing hedge positions to reduce and simplify their company’s hedge books. There are three principal reasons: The US dollar has had a mixed history as a driver of gold prices. It was largely irrelevant during the famous 1979-80 gold rally, was the key drive of the one in 1985-87, but was only marginally supportive during the rallies in 1982-83 and 1993-96. So far during the 2001.02 gold rally, the dollar has been clearly supportive, but with legitimate concerns about the Euro Zone and Japanese economies, by how much more will the dollar depreciate? Inflation has been the missing factor of this rally. Rising (or expectations of) inflation has traditionally been the most dependable macroeconomic variable to support a sustained 1. – Lower interest rates have reduced the have also followed a similar pattern during attractiveness of forward selling both wars – even more markedly than that of 2. – The downward trend in gold prices has ended 3. – Shareholder pressure against hedging has risen significantly, partly due to a positive view on gold prices, but also to Enron-generated concerns about transparency and the predictability of earnings related to derivatives.

We estimate that the global producer hedge book fell by around 400 tonnes in 2002 and, based upon the current trend, appears likely to fall by in excess of 300 tonnes in 2003. 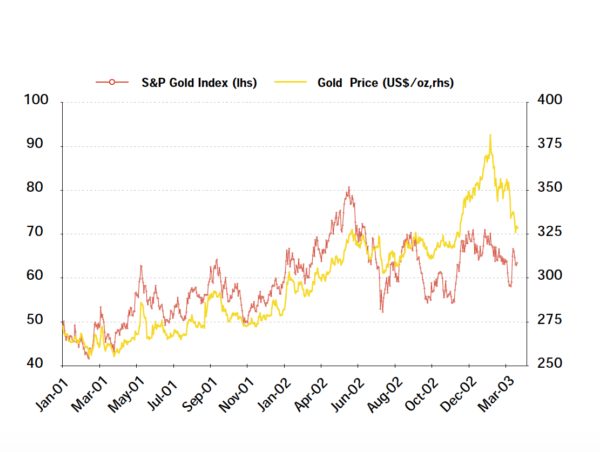 Equity markets have provided second-wave support for gold, and continued losses in the US have also maintained pressure on the dollar. While weak equity markets and firm gold prices have seen gold, equities return to some favour, in general, gold equities have been underperforming gold prices for some months now.

Using the S&P Gold Index as a consistent long-dated daily data series, a simple linear regression can be used to estimate the correlation between gold prices and the gold equities relationship from January 1990 to April 2003.The model has a "success rate" (or R squared) of nearly 80%. It is therefore possible to use a formula to assess what the implied S&P Gold Index value should be at current prices, or what gold price the S&P Gold Index is currently factoring in. The calculated regression model is:

As noted earlier, the overall pattern of gold price movement has been reasonably similar to what took place in 1990-91. Gold equities have also followed a similar pattern during both wars – even more markedly than that of gold prices – initially benefiting during the run-up towards military action but falling as soon as it became clear that the US would enter the conflict.

Probably even more importantly, in both 1990-91 and in 2002-03, the implied gold price of the S&P Gold Index fell into a significant discount during the entire conflict period. During the previous conflict, this discount held until late 1992.

Buy the War, Sell the Peace?

Even though the two Gulf Wars themselves are very different, gold and gold equities have behaved remarkably similarly in both Gulf Wars. There is, however, a critical difference: back in 1991, gold was already in a notable downtrend, the world was moving into recession and disinflation had taken hold.

In 2003, gold has been in an uptrend, the world is already struggling to recover from a recession and disinflation appears to have ended – all reasons why the course for gold and gold equities should see a much more buoyant post-war experience than twelve years ago.

Kamal Naqvi is the London-based precious metals analyst for Macquarie Bank, where he is an associate director. He has worked for the bank for the past five years and is part of a dedicated research team that services the equity, bullion and commodities trading and corporate advisory divisions of the bank with metals and minerals research, strategy and market intelligence.

Prior to joining Macquarie, Kamal was a consultant with CRU International Ltd in London, as part of both the lead/zinc and precious metals teams. Earlier, he was a project manager/economist for the Mining & Mineral Processing Division of the Tasmanian Department for Development and Resources.

Educated at the University of Tasmania, Kamal obtained degrees in economics (with honours) and law. He is a member of the LBMA’s Management Committee and is chairman of the Public Affairs Committee.