The Gold Hedge Indicator measures the net delta of the global hedge book, and is thus designed to be a simple but comprehensive gauge of the impact of producer hedging on the spot gold market. Currently the survey covers 85 producers, accounting for about 67 per cent of world production.

Until recently most producer hedge surveys have been based on calculations involving "committed ounces" or, during the bear market for gold, on "protected ounces”. These surveys, while providing a useful aid in understanding the theoretical maximum a producer might have to sell or over which it has price protection, are imperfect measures of the impact on the spot market.

The net delta approach, used by the GHI, takes into account the market impact of all derivative contracts in a producer’s hedging portfolio. At a given point in time and gold price, the net delta calculates the actual impact of hedging in terms of equivalent ounces of gold sold into the spot market.

For example, the sale of 100,000 ounces of one-year $400 calls is a commitment of 100,000 ounces, whereas on a net delta basis – at say a gold price of $335 per ounce – the impact on the spot market might be only around 17,000 ounces, as they are unlikely to be exercised. Accordingly, the committed ounce methodology overstates the actual impact of option positions.

With the publication of the March 2003 GHI report we now have a considerable body of data from which to begin drawing some important long-term conclusions.

As the table and accompanying chart show, the net delta has declined from 100.9 million ounces at 30 September 2001 to 77.3 million ounces as of 31 March 2003 – a fall of 23.6 million ounces, or 734 tonnes. For 2002 the decline was a robust 14.4 million ounces, or 447 tonnes. Although the rate of decline has slowed in recent quarters, it is still close to four million ounces per quarter and, in recent weeks, there have been announcements of additional reductions in several books. We think that this trend, and the weakening US dollar, are key factors behind the sustained climb in the gold price over the last year.

What factors have spurred this ongoing decline in hedging? The most significant have been:

We think these factors may continue to drive a reduction in producer hedging for at least the balance of the year. If gold prices continue to improve, the net delta on net calls will rise as these positions come closer to being "in the money". However, there is an offset from puts, which are increasingly out of the money and do not require as much gold to support the positions. 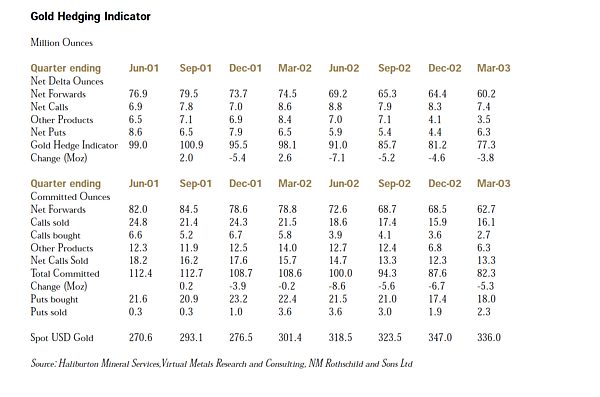 The committed ounce methodology shows a similar but steeper decline than the net delta methodology. From a high of 112.7 million ounces at 30 September 2001, the committed ounces have declined to 82.3 million ounces at 31 March 2003. In considering this 30.4 -million-ounce (945 tonnes) or 27 per cent decline over six quarters, it should be noted that the growth of producer hedging took place over more than ten years.

Within the overall committed ounce decline, net forwards are down 26 per cent. An even sharper fall is recorded with respect to other products (hybrids, contingents, and convertibles), reflecting a swing to more plain-vanilla products. As committed ounces decline, they are diminishing relative to annual production. Currently the producers in the GHI survey have about 1.5 years of annual production hedged, down from 2.2 years in mid-2001. The book is equivalent to about one year of total global mine production.

What do we expect of the future? The factors driving the contraction in producer hedging show no signs of going away – at least in the near term. What impact will this have on future hedging trends?

For the near term the hedge book seems set to decline further, but before extrapolating that too far into the future we should explore the underlying motivations more carefully. One factor behind recent de-hedging is that a number of large mergers in the gold industry have seen some heavily hedged Australian producers acquired by North American or South African producers, who either have non-hedging or lower levels of hedging as basic strategies.

Once these consolidated entities reach their objectives, the pace of hedging declines will slow significantly. Furthermore, if gold prices remain firm, gold exploration and, hence, discovery rates should pick up from current low levels, and projects currently on the shelf due to the gold price will get dusted off. Financing anticipated new discoveries and more leveraged projects may well require hedging to assure cash flow and fund debt repayment.

Another trend, mentioned above, is the move away from exotic products. Also, although insurance for price protection is not high on many producers’ agendas, there are some new puts showing up in our survey, and there may be more puts and forward sales if price spikes create attractive opportunities.

Over the last decade producer hedging has ebbed and flowed as the outlook for bullion and the industry changed and, although the current decline clearly has "legs", no trend is forever.

The Gold Hedge Indicator – or GHI – a joint venture between Haliburton Mineral Services and Virtual Metals, is a quarterly report on global gold producer hedging activity and is about to move into its second year. Central to the GHI is the focus on net delta calculations. The authors thank NM Rothschild, the project sponsor, which initially conceived a report based on the net delta approach and which developed the detailed methodology for calculation of the option deltas. The authors also thank Clive Turner and Martin Fewings for their help in developing the GHI concept.

Ted Reeve is a Toronto-based consultant. Prior to setting up his business, Haliburton Mineral Services Inc, in 2002, he was for nearly twenty years a gold equity analyst with a number of brokerage firms. In 1990 he began publishing a quarterly gold hedge survey that detailed the growth in producer hedging over a decade. He has a Ph.D. in geology and an MBA from the University of Toronto.

Jessica Cross is CEO of Virtual Metals, successor company to Crosswords Research & Consulting, which she founded in 1994. She has been a precious metals analyst for 15 years and has a Ph.D. in financial derivatives.

Martin Fraenkel is a director with N M Rothschild and Sons Limited, where he is Head of Commodities. He has worked on producer hedging strategies in gold and other commodity markets for nearly 20 years.