"London is to gold what New York is to dollars and Tokyo to yen, home for the settlement of international transactions." – Towards Transparency, Alan Baker, Alchemist 6

Alan Baker, then chairman of the LBMA, noted the general call for greater transparency in listing a number of initiatives in his editorial comment of January 1997. Among them were the announcement of the Association’s first overseas function and the publication of a new page on Reuters displaying mid-market indications for gold lease rates.

However, it was undoubtedly the first item on his list – the release of the first set of clearing statistics for the London market – that drew the most attention. It was long known within the market that substantial amounts of gold and silver clear in London, the result of transactions carried out not only by and with London dealers, but also by counterparts around the world with each other and with their clients. For the first time, statistics quantified how much metal was involved.

Released on a monthly basis ever since, the figures show daily averages for three measures: the ounces transferred, the value of the ounces based on monthly average London fixings and the number of transfers.

The figures differ fundamentally in nature from volume figures published by exchanges. Unlike those figures, London clearing statistics do not measure individual transactions; they measure the metal that is transferred from one clearing account to another on a net basis. Two counterparts may buy and sell from each other many times over the course of a day, but upon close of business, only the net ounces that one owes the other are transferred from one clearing account to the other. For example, if the one participant buys and then sells 10,000 ounces of gold with the same counterpart for the same value date, although 20,000 ounces of gold have traded, there will be no movement of metal, and no impact on the clearing statistics (see sidebar – About the Figures).

In the ensuing seven years, clearing statistics for both gold and silver have declined almost steadily. Annual averages for ounces transferred have fallen by an overall average of 56% in gold and 70% in silver from 1997 to 2003. The number of transfers has declined somewhat less steeply over the same period – more notably in gold, where they are down 38%. The decline stands out even more sharply when compared to the recent increase in volumes on exchanges, notably NYMEX and TOCOM.

Peter Fava and Peter Smith were both involved in the compilation and release of the original figures. They look at some changes in the nature of the market and over the intervening years that might have had an impact on the reported numbers.

Have there been changes in the overall pattern of trading activity from certain counterparts?

P Fava – There have been major shifts in levels of activity from groups of counterparts that would definitely impact clearing statistics.

There’s been a decrease in some areas – notably producers and central banks. The decline in producer hedging has of course reduced the demand for borrowed gold. With lease rates standing at extremely low levels, it’s no longer attractive for central banks to place gold on deposit, so there isn’t the continual rolling over of positions month-by-month that used to be such a staple of business. Instead, many central banks have extended the duration of their lending through interest rate swaps and longer-term collateralised agreements.

However, these decreases have been offset by increases from other sectors. At higher prices, there tends to be less real physical business, but more speculative activity, with counterparts increasingly trading on a leveraged, forward basis. Many of these positions are closed out before they mature – in a similar manner to a futures contract – therefore, they don’t involve the transfer of any metal. 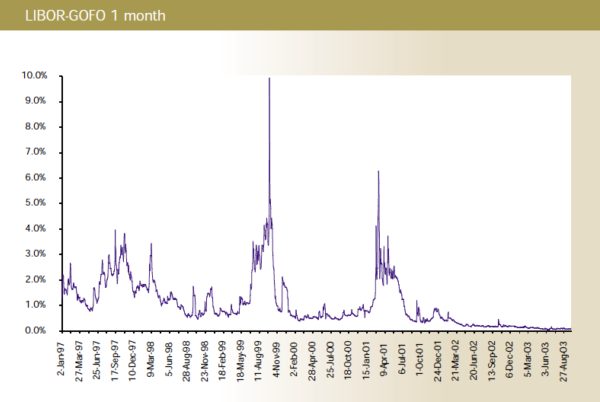 There is much more fund participation in the market – but their spot transactions are generally netted against EFPs – exchange for physicals, which swap the original exposure to the spot London market with a futures contract. So, the initial loco London transaction is offset and essentially nullified by the EFP, which moves the position to the exchange. Therefore, no loco London clearing takes place.

The interbank market is also showing increased activity – but if I now trade 50 times a day rather than 20 with the same counterpart, it still comes down to only one transfer of metal.

Also, the availability of Access, NYMEX’s electronic platform, which makes it possible to trade on the Exchange around the clock, might have an impact on London trading volumes. 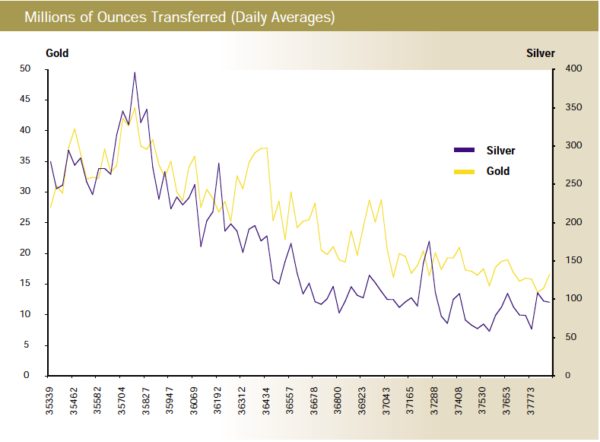 What factors outside of trading might have an effect?

P Smith – As mentioned in the original Alchemist article, we were always aware that the element of netting would cause the clearing figures to understate the actual volume of business.

However, not everyone was netting in 1997 – some clients were using FX-based systems that handled transactions on a deal-by-deal basis. Netting has grown much more widespread and the old systems have been replaced in the drive towards greater efficiency. Virtually all counterparts now net.

The fact that the number of transfers hasn’t declined as steeply as the ounces transferred suggests smaller transactions overall. What might be causing that to happen?

P Smith – There has been an increase in another area of trading – some banks have expanded into consignment accounts in physical markets, notably Istanbul, Dubai and India.

When customers purchase out of the consignment account and the metal is hedged loco London, these transactions tend to occur in small increments, so that might contribute towards a lower number of ounces per transfer on average.

The figures show the volume (in millions of troy ounces) transferred on average each day, the US dollar value of that volume (applying the monthly average London pm fixing price for gold and the average London spot fixing price for silver) and the average number of transfers each day. In order to minimise double counting, the clearers only record the debit side of each transaction.