When Tudor Investment Corporation examined the problem of commodities analysis, it became clear to us that we needed to reduce the commodities data universe from a vast and diverse array of mine closures, cattle placements, and crop conditions to a set of statistics that could be compared on an apples-to-apples basis across trading instruments.

On any given morning, when a certain Mr Jones is surveying the entire marketplace – from equities to fixed income and from currencies to commodities worldwide – the last thing he needs to see is every soybean emergence number. Therefore, Tudor has come up with a number of measures which allow a comparison of various diverse commodities on common terms, and which allow us to make enough sense of these markets to transact, on average, 270 distinct futures trades every day.

My precinct includes energies, grains, meats, softs, and base metals as well as precious metals. This is also something of a disclaimer because due to my personal limitations I am not a true expert in any of the commodities I track, but rather a relayer and synthesiser of expertise from specialists in each subject area. When I’m in farm country, I sometimes attract a hostile glare from people who work with corn or soybeans for a living, because they see the attempt to distil their data as a devaluation of their expertise. But only by having analysts who compile detailed information through exhaustive detective work are the compressed, synthesised summaries that I offer made possible.

We at Tudor have decided that there are three primary non-chart-based areas of concern: volatility, liquidity, and fundamentals. Without sufficient volatility and/or liquidity, there is no potential for a trading return.

Without fundamentals on our side, we are fighting the long-run pricing tendency of the market most of the time. 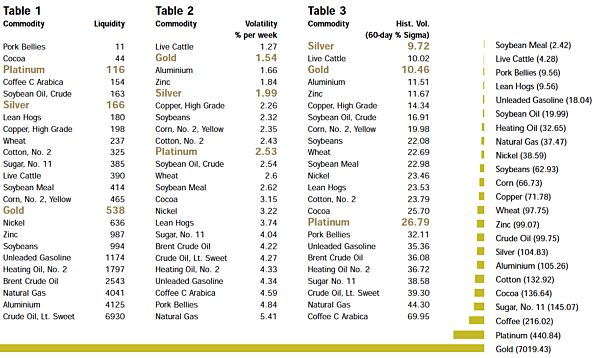 First of all, liquidity is a big concern. For big accounts, the liquidity of a position can mean the difference between booking a small profit and getting stuck in a Roach Motel – a trap where cockroaches can check in, but they can’t check out.

Table 1 displays the liquidity measure we use to assess the tradability of a commodities future. This measure is compiled by taking the average dollar volume of trades made over the past forty days. (Please keep in mind that these numbers were accurate at the time they were compiled in the spring and may not be as accurate now. It’s fair to say, however, that the broad picture the numbers create is consistent over the longer term). Gold fits in right in the lower middle of the table, with a sufficient turnover to allow easy entry and egress from the market. Silver is less commodious, and platinum is relatively untradeable to a fund of our size.

Another issue for us is volatility. If a commodity future doesn’t move around in price, we can’t make any money on it without using options. We prefer simple directional bets, a method that has been successful for us. Table 2 shows volatility as measured by the average % change per week. The average is taken over the last 50 weeks. Gold looks fairly stationary, and silver and platinum are progressively better, if good is defined as ‘volatile.’

To summarise – our trading interest within this analytic framework indicates that we have a difficult time finding trades in gold, and difficulty executing in platinum, whereas silver offers a fair compromise between an interesting market and adequate tradability.

The third cross-commodity metric that we like to use is DR or "days remaining of supply”. This measure is equivalent to a stocks-to-use ratio expressed in terms of how many days of supply are in storage, given no further production and continuing demand at a constant pace. The illustration on the preceding page shows a list of the commodities we trade with the days remaining of supply, arranged from the lowest number of days at the top to the highest at the bottom. In some sense, this indicates how “on edge” the market is, or how easily perturbed it can be by real world events. Silver appears in the lower half but ahead of such items as coffee, cocoa, and sugar. Platinum has a far greater stocks-to-consumption ratio than almost all the others – with one notable exception.

It’s fair to say that nothing else even comes close to gold’s 7,019 days. This leads us to a proposition that I’m sure some of you have thought about before: the right way to trade gold is as a foreign currency, not as a commodity. You would need someone else to give you a trading recommendation; I abdicate my duty to declare myself bullish or bearish flat price in the face of what I consider overwhelming evidence that gold resides outside my supply/demand analytical framework.

The Tudor Investment Corporation supply/demand analysis front end gives a good insight into the method behind the analysis of the days remaining calculation. We look at the three elements of a supply sufficiency forecast: production, consumption, and stocks along with a price chart and a chart of the changing supply situation over time.

The lower left-hand box in the screen shot above left is the history of days remaining. Gold’s current level of 7,019 days of supply remaining is low for it, but still quite amazingly high for a commodity – so high that almost no event in the world can substantively affect a consumer’s ability to fill his or her need for metal in a physical sense. In some commodity markets, there are such tight physical constraints on supply that some hypothetical events could mean that consumers could not get the material at any price. This is simply not true in the case of gold.

It’s generally accepted in the commodities trading world that price is related to supply sufficiency. Traders in general believe that if supplies decline or demand increases, prices will rise, and that the opposite is true as well. Testing this proposition is tricky, however.

Just to show that I’m not crazy, here is a plot from a well-known (in agricultural circles) forecaster showing the relationship between supplies of soybeans and soybean prices. As the stocks/use ratio (or carryout/use ratio) increases, the price decreases in a curvilinear fashion described by the black line on the chart.

I’ve taken a stab at a similar analysis with a few of our commodities, shown above. Using the statistical method of linear regression, the computer drew a line through the middle of the data. By inverting the stocks/use relationship, I’ve removed the need for a curved line, so the computer could more easily fit a line to the data. I want to make it clear that this will show a linear relationship between the two data series if there is one to show, but the usual caveats apply. When you attempt to replicate this regression at home, your mileage may vary.

To summarise: silver has a commodity-like set of fundamentals, decent volatility and decent liquidity. Platinum is ruled out by severely constricted liquidity – it would take a stupendous investing opportunity to justify a foray into such an illiquid commodity. And last but not least, I don’t classify gold as a commodity at all. My fundamental analysis framework is inappropriate for forecasting gold prices. Obsessively following mine production and demand are valuable only as a way of anticipating actions of other traders. Gold trades as a form of foreign exchange.