Reversal Patterns: The Battles of the Bulls and the Bears

One of the central tenets of Dow Theory is that a trend is assumed to be intact until it provides enough evidence of its reversal. Pattern analysis is at the core of this theory, displaying the clear battle that develops between bulls and bears when trends reach these critical turning points.

An uptrend is defined as a sequence of higher highs and higher lows, while a downtrend reflects a series of lower lows and lower highs. It is essential to establish where this trend sequence of highs and lows breaks down when identifying trend reversals. Generally speaking, markets tend to reverse a trend after a period of deliberation, when a somewhat evenly balanced battle brews between bulls and bears – contrasted with the one-sided affair evident during an impulsive trend.

Reversal patterns are the result of this battle between bulls and bears, and the identification of a pattern provides a trader with reinforcing evidence that a reversal is imminent. Sentiment is always an important indicator. If bullish sentiment is rising, one would typically expect price activity to reflect this by trending higher. During a reversal stage, sentiment is usually extreme – however, the price fails to reflect this condition and instead displays an inability to trend. This behaviour generally provides the first warning that momentum is waning and it is during this period that patterns will develop. Price reversal patterns therefore have the ability to clearly reflect shifting dynamics in market sentiment, allowing the trader to adjust positioning either through closing existing positions or tightening risk parameters.

1. The Three Phases of a Trend

Chart 1 displays the evolution of a trend, which typically breaks down into three phases. The first is the basing (accumulation) or topping (distribution) phase. The second phase marks the trend confirmation that results in the explosive, impulsive directional move. This is followed by a period of accumulation or distribution (depending on the direction of the trend) and represents the trend’s final phase. From this we can conclude that reversal patterns are found in the first and third phases of a trend. This area will also represent the region where the sequence of highs and lows that define a trend begins to break down.

Pattern recognition enables a trader to identify a change in market sentiment and identify the point at which that change in sentiment is confirmed. This helps to improve timing when a trade is executed. One other valuable piece of information that reversal patterns provide – once the pattern has been confirmed – is a projected target. This helps one assesses the risk/reward conditions of a potential trade.

In Chart 2, (Bund Daily Bar Chart), point x is the point at which the sequence of higher highs and higher lows that has defined the uptrend breaks down, providing a key trend reversal signal.

A head and shoulders formation is made up of three points. The market defines a fresh high in the trend and then retreats to form the left shoulder (S1). A fresh rally follows that also meets resistance above S1 and retreats to form the head. Finally, the market begins to recover once again, although it fails to break the prior high (S1) and then retreats to confirm a fresh low (below point x) and a reversal. The line that connects the reaction lows is known as the neckline, and the pattern is confirmed once this is breached.

All reversal patterns utilise the same application – in other words, assessing the point at which the sequence of highs and lows that make up that particular trend reverses. An additional advantage of this pattern is the ability to calculate a price projection once the pattern is confirmed. This is achieved by calculating the distance between the head and the neckline and projecting the difference once the market breaks below the neckline.

Where is the pattern negated? There are two schools of thought on this: the first is that price action must remain below the neckline and the second is that a break above the right shoulder is required to negate this reversal pattern (which you choose is a subjective decision). A head and shoulders pattern that reverses a downtrend is known as an inverted head and shoulders reversal. 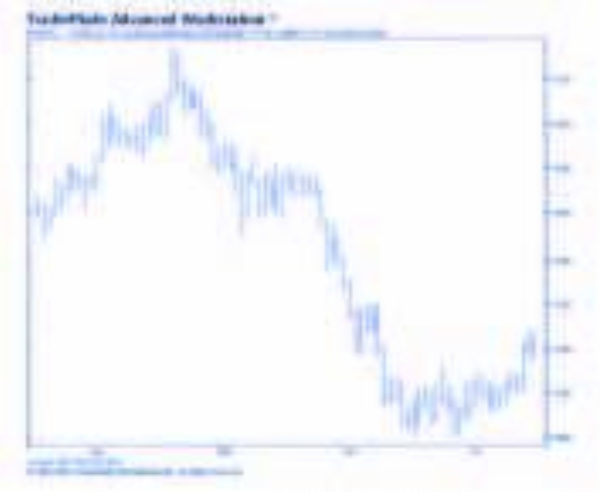 The double top / bottom reversal is similar to the head and shoulders. Point x is where the sequence of lower lows and lower highs seen in Chart 3 (AUD/NZD Daily Bar Chart) breaks down and the trend is reversed. The key feature in this pattern is the subsequent deep sell-off in the direction of the trend following the reactive high to x. This results in a move towards the extreme lows of the trend. However, the market fails to confirm a new low and begins to recover. The break above x is known as a break above the midpoint and confirms the reversal pattern.

A double top reversal pattern occurs at the top of an uptrend. As we saw in the head and shoulders pattern, double top / bottom reversal patterns provide a price projection. In the case of a double bottom, this is determined by calculating the distance between the lowest point of the pattern to the midpoint and projecting the sum from the midpoint. A rounded reversal is similar to the double top/bottom formation, except that the pattern does not identify two separate trading periods and adopts a more rounded appearance.

The island reversal, shown in Chart 4 (CBOT – Rice), represents a short trading period over a very tight price range. This area of trading is separated from previous activity by an exhaustion gap and a breakaway gap. The pattern, and hence the reversal, is confirmed by a breakaway gap.

The key feature here is the presence of an isolated trading period and the two gaps, which clearly display a change in sentiment. The existence of a gap at the beginning of a trend is in itself a powerful signal that reinforces the start of a fresh trend. 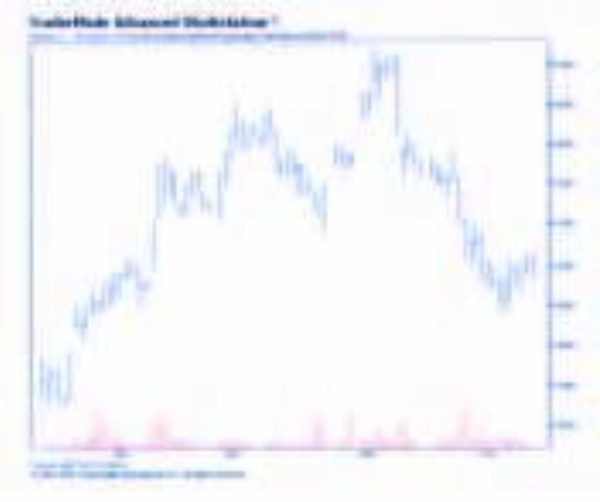 V-Formations are the most difficult reversal patterns to trade because price action does not provide much warning that the trend is about to reverse, (though the existence of exhaustion gaps provides some warning of an impending reversal). An abrupt reversal unfolds, allowing little time to react. Momentum trading systems combined with the increase in futures trading have resulted in an increase in this type of reversal. A V-reversal is also likely to occur where a steep trend has developed. These types of trends are generally regarded as being unsustainable. Chart 5 (JB-10Y) illustrates a V-reversal 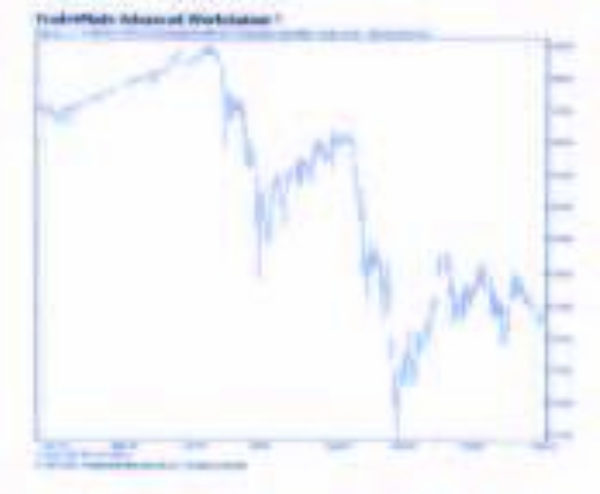 While we will refer to this pattern as a key reversal day, it is equally applicable to a weekly or even a monthly reference (see Chart 6, DAX – Daily Bar Chart).This is a single-day pattern that clearly indicates a shift in market sentiment during a single session. 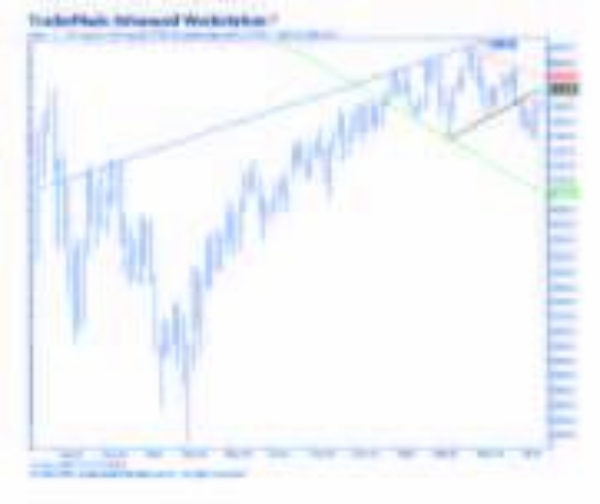 The diamond formation is rare and when it does develop, it is found at market tops or bottoms. The appearance of price activity that is lacking a clear direction following a trend is consistent with the typical behavioural elements one would expect at a reversal stage. A diamond as seen in Chart 7 – FTSE (Cash) starts out as a broadening formation and is usually followed by a symmetrical triangle. The eventual breakout confirms the pattern, and hence the trend reversal. This pattern also provides a trader with a price objective, determined by calculating the widest part of the pattern and projecting this value once the breakout occurs.

A Final Word On Momentum And Volume

A study of momentum and volume can help in identifying reversal patterns. A fall in volume during the accumulation or distribution phases is to be expected, whilst an increase in volume is expected when a reversal pattern is confirmed. This increase in volume is essential when the pattern reverses a downtrend. Equally, conditions in momentum – such as overbought and oversold allied with a divergence between momentum and price –would act as a warning sign that the trend is entering its final stage.

Taso Anastasiou is Global FX Technical Strategist for UBS Investment Bank, which he joined four years ago. He produces technical research and develops trading strategy on the FX and precious metals markets. He is part of the global fundamental and technical team that works closely with the bank’s traders, sales professionals and clients and has been a technical analyst for 11 years. Prior to joining UBS, Taso worked for what was then S&P MMS as an FX technical analyst. He spent five years at MMS, the last 18 months managing the FX technical product there. Prior to that, he traded IMM currency futures in Athens.