The mining industry remains a major contributor to the economy of South Africa.

According to data from the Department of Minerals and Energy of South Africa, the sector contributed 7.1 % to gross domestic product in 2003, of which gold was a key contributor in value terms.

However, the gold mining sector continues to face a variety of extremely difficult tests – in nearly every aspect of its day-to-day operations: financial, technical, human and policy. If the industry successfully overcomes these tests, it should emerge leaner, fitter, and more efficient. It will also be radically different from the country’s gold industry of even a few years ago.

terms of productivity improvements – such as higher tonnage mined per mineworker and increased production volumes – as well as managing and reducing costs.

Previously, the cost pressure was negated to a large extent by a weakening rand against the US dollar. However, in 2002 the fortunes of the rand convincingly reversed, and miners lost the cushion of higher rand gold prices, as shown clearly in Charts 1 and 2.

Perhaps the greatest concern now facing the gold industry is the degree and rapidity of shrinkage in personnel. Chart 3 reveals that, over a twenty-year period since 1984, the number of unskilled personnel employed by the South African gold mining industry has fallen from 450,000 to 130,000 due to restructuring in the sector. It is estimated that each mining job has between seven and 12 dependents. Thus, the wider social and economic damage – not just in South Africa but in neighbouring regions – is substantial.

The struggle to get ore to the surface has been compounded in the last decade by the need to come to terms with the fact that HIV/AIDS has become endemic among South African and migrant mine workers alike. The ongoing implications of this include increased expenditure on medical insurance and disability cover and higher indirect labour costs through reduced productivity, higher absenteeism, and the need to train and replace labour.

According to data from the Chamber of Mines of South Africa, mining companies spend between R200 and R480 per employee per annum on HIV/AIDS programmes in the workplace. The programmes covered by this budget include prevention and awareness campaigns, education and training of employees, voluntary testing and counselling, treatment of sexually transmitted infections, wellness management and home-based care, and community-based intervention programmes. This amount excludes the antiretroviral treatment introduced by some of the mining companies, which is normally allocated from a separate budget.

Therefore, the strong rand (ranging from 6.00 to 6.50 to the US dollar) has put pressure on operating costs at a time when individual mining companies have demonstrated a commitment to good corporate social responsibility, with significant expenditure on a myriad of social welfare programmes, including health care, education, self-help and infrastructural projects within the communities in the vicinity of the mines themselves. 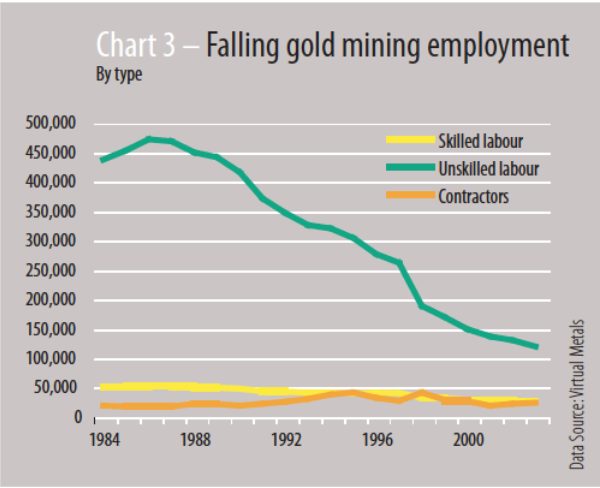 In addition to these financial, human and geological challenges, the South African gold mining industry has also been required to embrace various pieces of national legislation, designed to address the inequalities of South Africa’s apartheid past.

The Mineral and Petroleum Resources Development Act of 2002, which came into effect on 1 May 2004, has direct consequences for the mining industry. This act seeks to facilitate participation in mining ventures by Historically Disadvantaged South Africans (HDSAs) and to ensure that mineral rights are fully exploited by applying a “use it or lose it”

The act furthermore grants the government some discretionary powers to regulate mineral rights and to promote and support HDSAs in the mining industry.

The broad-based Socio-Economic Empowerment Charter of 2002, which has become known as the Mining Charter, is central to the objective of creating a globally competitive mining industry that draws on the human and financial resources of all South African people and offers them real benefits. The target for HDSA ownership of a business entity has been set at 15% of mining assets in the next five years and 26% within 10 years.

Progress on this front is being monitored via the ‘mining scorecard’, a formulated standardised mechanism for monitoring the empowerment progress of a company. A mining company’s conversion of licences order is dependent on compliance with this BEE scorecard. The risk of not converting or of non-compliance is to forfeit the right to mine.

Closely allied to this is the Mineral and Petroleum Royalty Bill, introduced in 2004 by the National Treasury to the Assembly as the Money Bill. If passed, it will become law and be effective from 2009.This bill recognises that South Africa’s mineral resources are non-renewable, and stipulates that they belong to the nation, with the State being custodian, much along the same lines as the Act of 2002. The Royalty Bill, however, proposes that all mineral producers (including gold miners) pay a royalty on mineral production. It is proposed that gold producers pay 3% of revenue from output (as opposed to 4% on platinum and 8% on diamond revenues).

The proposed 3% royalty represents a direct cost, although proponents of this tax argue that the bill will merely level the playing field. They point to the fact that most other mining countries already have similar royalty structures in place, and therefore argue that South Africa is simply catching up to international norms.

Royalties will be levied from 2009 in order to dovetail with the company conversion to the new mineral rights as laid out by the Mineral and Petroleum Resources Development Act of 2004, calling for 15 % of South Africa’s mines to be owned by HDSAs by 2009 and 26% by May 2014. 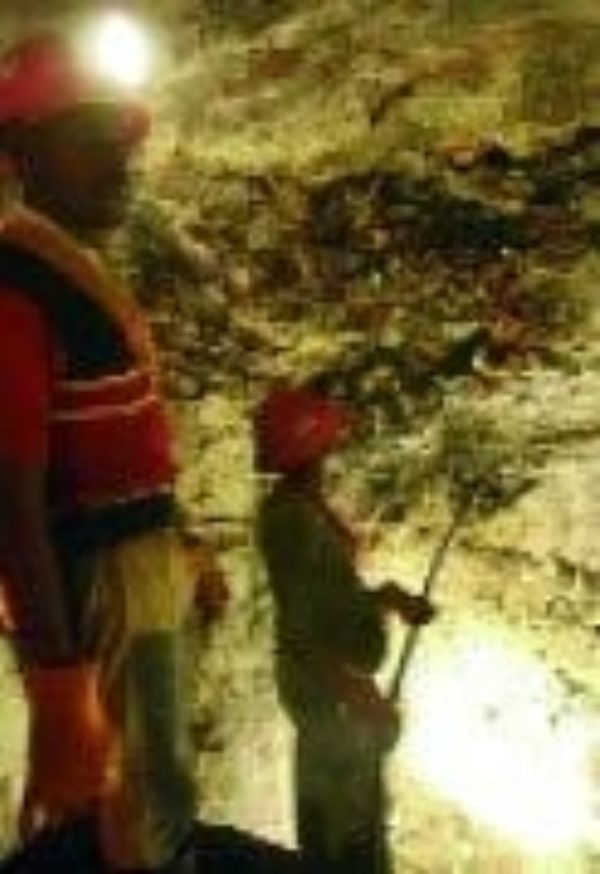 In South Africa, the concept of beneficiation as technically defined by the Department of Minerals and Energy refers to the various processes that involve upgrading, improving, processing or treating a primary ore by the removal or separation of impurities from the economic minerals.

The issue of adding value to South Africa’s minerals before they are exported has been under debate for a number of years. This debate is based on the argument that the South African beneficiation of gold is currently only about 2% of current mine production – and that the country is not exploiting any comparative advantages of its large natural resource base. But the perception of South Africa having comparative advantage due to the location of its mining industry does not in itself render the country competitive in terms of its downstream industries. In South Africa, downstream industries are largely dominated by the gold jewellery manufacturing industry, as it represents over 80% of South African gold consumption.

It is clear that the process of adding value to gold has not taken off to any great extent in South Africa. There are structural reasons why these industries have had stagnant growth. They are very small and hold little potential for the kind of incremental growth expected by the key stakeholders in the next five years. Hence the significance of exports as the focal point for any deliberations that take place on gold beneficiation. 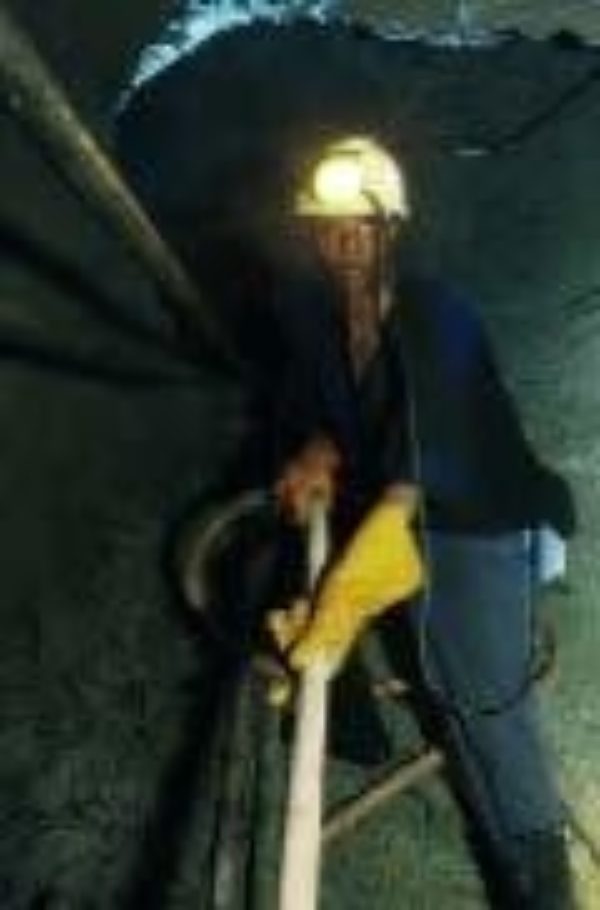 Any strategy that is to have national impact and invigorate the gold beneficiation industry of South Africa must be based on jewellery: quantities of gold used in industrial applications such as electronics are still relatively small. But even within jewellery exports, a distinction has to be made as to where a competitive gap can be found for a South African company to enter. For example, India, the largest consumer of gold jewellery, does not offer itself as an opportunity for South Africa because labour costs are cheap.

Europe and the US are relatively sophisticated markets that use mechanised industries, and these might be open to exploitation by South African jewellery manufacturers if a conducive environment can be created. But the barriers to gold jewellery manufacturing growth need to be eliminated, and the structural problems of a highly fragmented industry mainly characterised by family-owned businesses do not provide beneficial economies of scale. Conditions have to be right in terms of incentives to support growth, such as the provision of gold loan schemes comparable to those in place for successful downstream industries in the international market.

In South Africa, there is a widely accepted need to redress the past destructions and distortions to individual career paths and education, and to widen access to opportunities both in terms of employment and the country’s inherent mineral wealth and entrepreneurial prospects.

Whatever the arguments, the upshot is that the South African gold mining industry is facing a number of very substantial challenges. Fortunately, this is an industry that has overcome many challenges over 100 years and no doubt will rise to address the ones highlighted in this article.

Lebo Mogotsi is a director of Lebone Resources (Pty) Ltd, a women’s empowerment mining company focusing on mining, beneficiation and consulting, and is on the boards of a number of JSE-listed mining companies.

She is a past executive member of the Jewellery Council of South Africa, has spoken at many industry initiatives and is currently working with Virtual Metals Research and Consulting Limited on a gold beneficiation research project in South Africa. She holds a Bachelor of Commerce degree from the University of Cape Town.