Rhyme, Reason and Rationale : An Introduction to the Elliott Wave: Part 2

Technical strategy is extensively employed in freely traded markets. In Alchemist 40, one of these strategic approaches, Elliott Wave, was examined – in part. This article picks up where the first left off, drilling down towards a deeper understanding of the Elliott Wave Principal and, specifically, shows how it is a valuable tool when committing capital and managing risk. 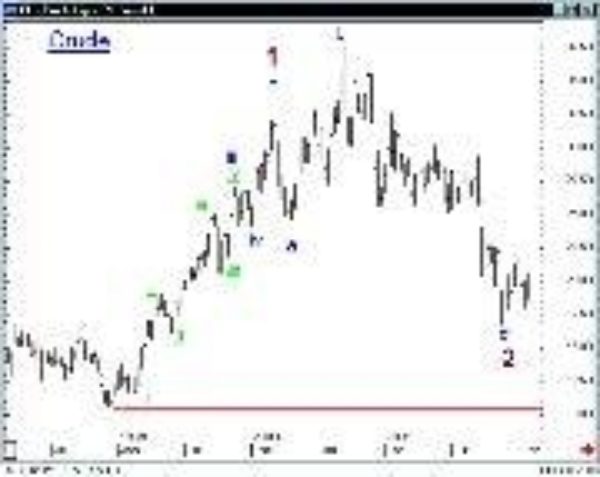 Figure One: For those buying this Wave-Two pullback, the stop or place where you are wrong is just below the low of Wave One.

Markets trend. Why this is the case provides a fascinating study in behavioural finance and collective psychology, the scope of which is beyond the limits of this article. But though the reality of market trends has been known for hundreds of years, they continue to baffle many academics, shoot holes in the Random Walk arguments and throw many of the assumptions of the Efficient Market Hypothesis into question.

So how does one recognise a trend? While you could do some basic quantificational analysis (collect a data set, run a regression), by the time you collect enough data, the trend is likely near an end. Further, this is impractical in any real-time application of market movement since, as has been said: markets rhyme; they do not repeat. The stark reality remains, however, that sticking with the trend is almost always the most profitable way to trade or invest. While this strategy sounds very simple, the real-time and successful implementation of this approach is extremely difficult. Trends exist in all time frames, from those that last decades to those that last minutes. The key is that all of these trends have similar characteristics. That is to say that a trend in five-minute data will display the same signals and patterns as the trend over many decades. The recurrence of trends and their robust interrelationships speaks to the fractal nature of market movement and investor psychology. Elliott Wave is one methodology specifically geared towards understanding and profiting from this fractality. 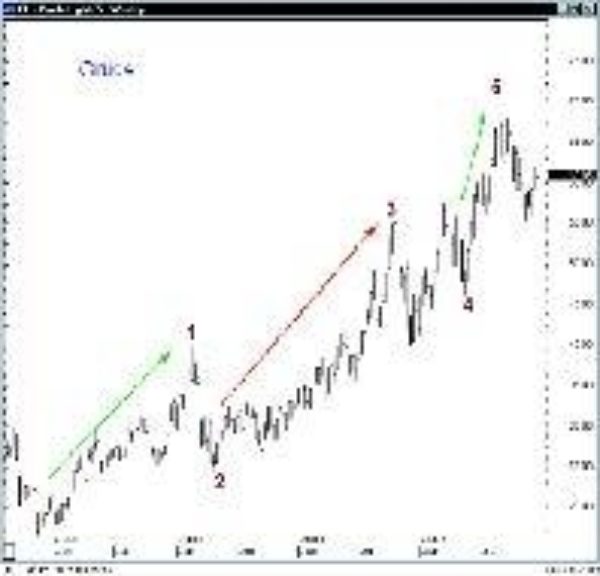 Figure Two: Wave Three is the most explosive wave and – clearly – not the shortest wave.

The key is not to know when your position is right; the key is to know when it is wrong. Whether that involves choosing a price point or identifying specifically what has to happen (data, news, events) to prove a view incorrect is crucial.

Outlining risks is helpful, but if money is on the line, a strategist needs to do better. We are obligated, no matter what our methodology, to be specific. Of course, no one is right all the time, but to paraphrase Alan Shaw, one of the great technicians over the last half century, given all the things that can happen in a trade/position, the key is to avoid the big loss. If you do that, everything else takes care of itself.

Where technical strategy excels – arguably its greatest advantage over fundamental strategy – is its ability to isolate very specifically where something is wrong with the analysis or the position. Being able to quantify the loss right at the beginning of the position/trade is of huge value, and not something readily available with other modes of analysis. Because one can determine the risk of any position right at the onset, successful money management techniques and the proper trading/investment vehicle can be determined.

However, one of the values of Elliott is that some of it is not subjective. In fact, among all the things to understand about Elliott, one key element is that there are three rules that can never be broken. This separates Elliott from most technical and fundamental methodologies, allows for proper money management techniques and answers the key question: where, specifically, is the view wrong? 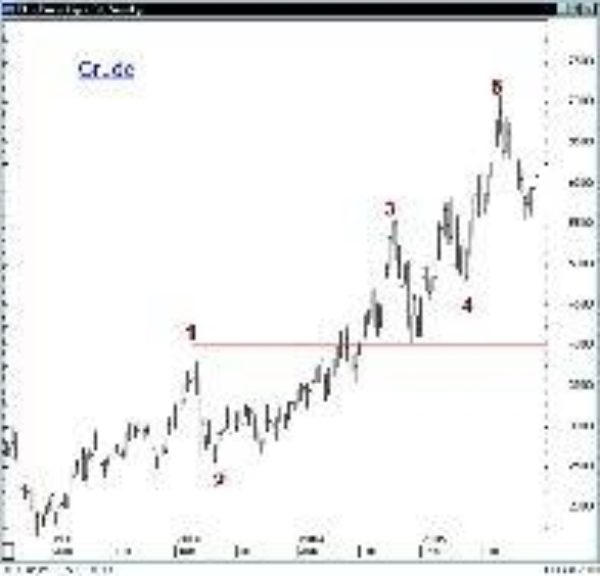 Figure Three: For those buying this Wave-Four pullback, the stop – or place where you are wrong – is just below the high of Wave One.

First waves are the ideal time to get involved in a market. Since they represent the onset of a new trend, they are the most profitable, given the greater five-wave move that has to unfold before the trend completes. However, getting involved in the first wave is also the most difficult, since, for example, in a new bull market, you are picking the bottom of the previous bearish trend – a notoriously difficult thing to do. Further complicating matters, first waves are often the messiest and most challenging waves to track in real time, given the scepticism that exists at the onset of any new trend.

It is common, however, either by being intentionally cautious or simply missing the first wave higher (in a bull trend), to use Wave-Two pullbacks to position to the upside. How one determines where to enter in a Wave-Two pullback is another issue (there are various methodologies that can be used), but the key is that this pullback, if it is a second wave, cannot go below where wave one began. This is where stops are to be put.

If the market goes below this area, the view, the position and the wave count are simply wrong. No subjectivity, no interpretations, just the simple dichotomy of right and wrong. Whether this tells you where to put a knock out on an option, stop on a spot trade or is simply an indicator of where a buildup of stops may be located, the real-time application of this rule can add great value.

Rule 2: The Third Wave is Never the Shortest

The third wave in a five-wave sequence is almost always the most explosive move in the trend. It is the point of recognition where faders and/or sceptics throw in the proverbial towel and join the trend (the exception is the commodity markets, which have a strong tendency for the fifth and final wave to be the longest). Given this propensity, the third wave in the five-wave sequence in any market (including commodities), can never be the shortest – using price, not time, as the basis of quantification.

An example: suppose that, in real time, you are tracking or committing capital based on a wave count. You believe you have seen a completed five-wave move and are about to take action based on the implications of this completed sequence. If the third wave in the count is the shortest, you are wrong. Your internal analysis is wrong. Your outlook is wrong. Again: there is no wiggle room.

A common mistake is that, because Wave Three cannot be the shortest, many assume it has to be the longest. But while this is often the case, it does necessarily have to be so.

Assume you have missed the first three waves in a trend and would like to enter the market on the belief/wave count that there is still a fifth and final leg to come before the trend completes. Similar to Rule One – where you missed Wave One and buy into Wave Two in anticipation of Wave Three – this time, you missed Wave Three and are buying into Wave Four in anticipation of Wave Five.

However, based on Rule Two, we know that third waves tend to be the most explosive and strongest waves (“wonders to behold” as Frost and Prechter called them) . So putting your stop below the low of Wave Three (as you would do below Wave One if utilising only the Rule One) is impractical and much too expensive. A strong move (third wave) does not tend to retrace (in the fourth wave) deep enough to make it a favourable risk/reward if you want to put your stop just below where the third wave began. Fortunately, Elliott can and does do better.

If you are buying into a Wave Four pullback, the stop goes below the previous Wave-One high in a bull trend, or just above the Wave-One low in a bear trend. If the market closes through this area, your wave count is wrong. Again, there is no subjectivity here. In real time, this is a very strong trade. The difficulty of catching a trend change is eliminated (trying to buy a first wave) and the trend is well established (three waves have already unfolded). This rule is thus very good at minimising risk (the trend is established and the stop is objectively determined without equivocation).

What this does not do is maximise reward, since you are attempting to position for the last wave in the pattern. But depending on the risk appetite, funding and exposure of the investor, Rule Three, more often than not, is very useful in real time.

This and the previous Alchemist article have merely skimmed the surface of financial market fractals, collective psychology, trend and the Elliott Wave Principal – and it bears repeating that a little knowledge is a dangerous thing. This is true about any market approach – technical or fundamental – but particularly true about Elliott.

The purpose here has been limited to introducing the concepts of Elliott Waves and discussing the objectivity of its rules. With the proper study of both the quantificational measures and relationships as well as the internal dynamics and characteristics of all the Elliott waves (1,2,3,4,5, a,b,c,d,e,w,x,y,z), a great – and profitable – tool can be readily utilised. Not only to maximise reward but, more importantly, manage risk.

He is a featured author in the recently released book, Market Analysis for the New Millennium, and is currently co-authoring a textbook on technical strategy.