On Supply and Demand

GFMS have prepared their Gold Supply and Demand table for 37 years, including it in their annual Gold Survey as well as updating it for the two interim Gold Survey Updates. In this occasional column, GFMS have prepared a brief commentary highlighting the critical supply and demand elements at play in the second quarter of 2006.The statistics in this report are those supplied to the WGC in August for their Gold Demand Trends report.

Looking at the supply side, Q2 global gold mine production provisionally registered a restrained 2% improvement against the same period a year earlier, to 625 tonnes. The anticipated increase can be attributed primarily to the positive impact of several new mines coming on stream, with much of the fresh supply originating from emerging gold- producing countries rather than the principal producing nations.

At the time of writing, the release of official statistics is anticipated to provide confirmation of strong growth in a number of Latin American countries, including Peru, as well as Mexico and Argentina. Along with support from stable, established production, these nations’ year-on-year performances respectively benefited from contributions from the significant new operations of Lagunas Norte, El Sauzal and Veladero.

However, declines in several of the traditional leading gold producers are seen to have erased a large part of the growth, with further declines in South Africa (albeit less severe than has been the case in recent quarters) and dramatically lower output from Indonesia.

The second quarter of 2006 saw net official sector sales decline to 53 tonnes, a little more than half the figure seen in the first quarter of the year and down by 63% year-on-year. The decline was in large part driven by the dramatic fall in sales from within the Central Bank Gold Agreement signatories. The group offloaded a mere 53 tonnes from their gold reserves over the period, with the metal coming from France, Portugal, Germany, Austria and the Netherlands. Elsewhere, countries outside the Agreement were essentially net-neutral, as gross sales and purchases, amounting to a little less than nine tonnes, offset one another.

Scrap supply leapt a weighty 57% year-on- year to 310 tonnes in the second quarter, chiefly as a result of higher prices. The Middle East showed the greatest gain, with its scrap not far off doubling to almost 140 tonnes. Gains were not restricted to the price- sensitive world, as Europe too saw a substantial rise due to higher inventory remelt and supplies from pawnbrokers. In contrast, Indian volumes were flat (and even fell quarter-on-quarter) as expectations were for further price gains. 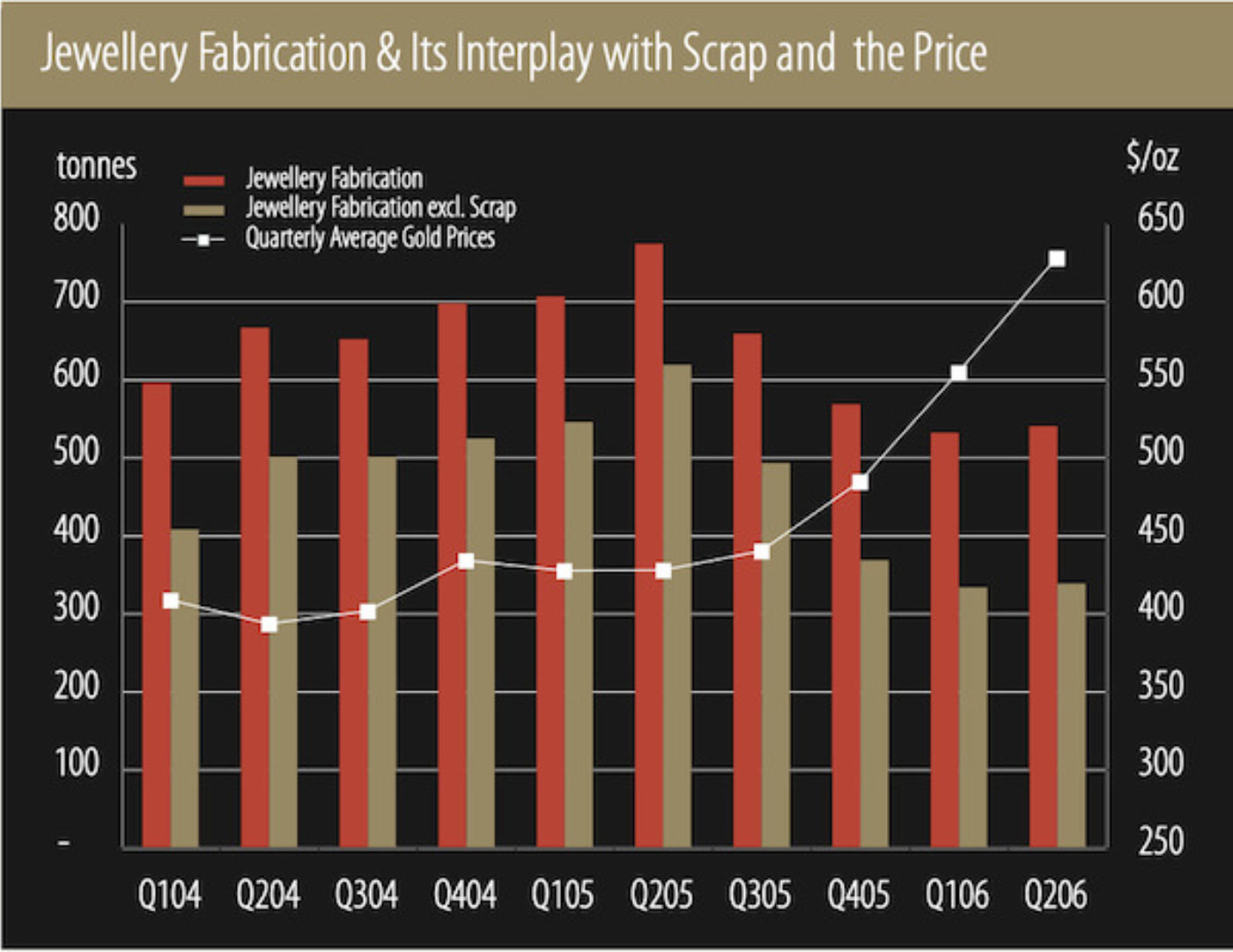 Investment activity remained busy throughout the second quarter of 2006. Over the first six weeks of the period, investors aggressively bought into positions in gold, driven primarily by expectations on the US dollar and the general understanding in the market that the metal was in a bull run. By 12 May, the gold price peaked at $725, 23.5% up from its level at the beginning of April. The peak was followed by heavy liquidations, which were mainly driven by movements in the greenback and which drove the price to its quarter-low of $567.With much of the buying seen in the first part of the period being offset by these subsequent liquidations, implied net investment only reached a middling 80 tonnes in the second quarter.

The elevated level of producer de-hedging seen in Q1 continued through Q2, with provisional figures indicating that, in delta- adjusted terms, a net 157 tonnes was removed from the producer book. This represented a dramatic increase from the subdued levels recorded a year earlier. Forward sales and gold loans were the source of the vast majority of the decline in the outstanding producer book witnessed in Q2, with changes to the delta- adjusted net options position considerably more muted.

Jewellery fabrication suffered greatly in the second quarter, dropping 30% year-on-year to 541 tonnes, largely as a consequence of higher and more volatile prices. India saw the greatest decline, as offtake more than halved (a loss of over 130 tonnes), followed by the other main price-sensitive area, the Middle East, where demand fell around a quarter. Offtake was so poor in part because – even when prices had retreated to below $600 in June – demand was slow to recover as nerves had yet to be soothed. Weak consumption in Western Europe and the United States, in part due to ongoing taste changes and signs of significant distributor destocking, also undermined jewellery. A little surprisingly, jewellery offtake in comparison to the first quarter actually rose (up 2%), thanks in the main to quarter-on-quarter increases for both India and the Middle East (due to such factors as robust economic growth and expectations of yet higher prices). Other fabrication rose by 11% year-on-year to 163 tonnes, chiefly due to higher official coin minting. 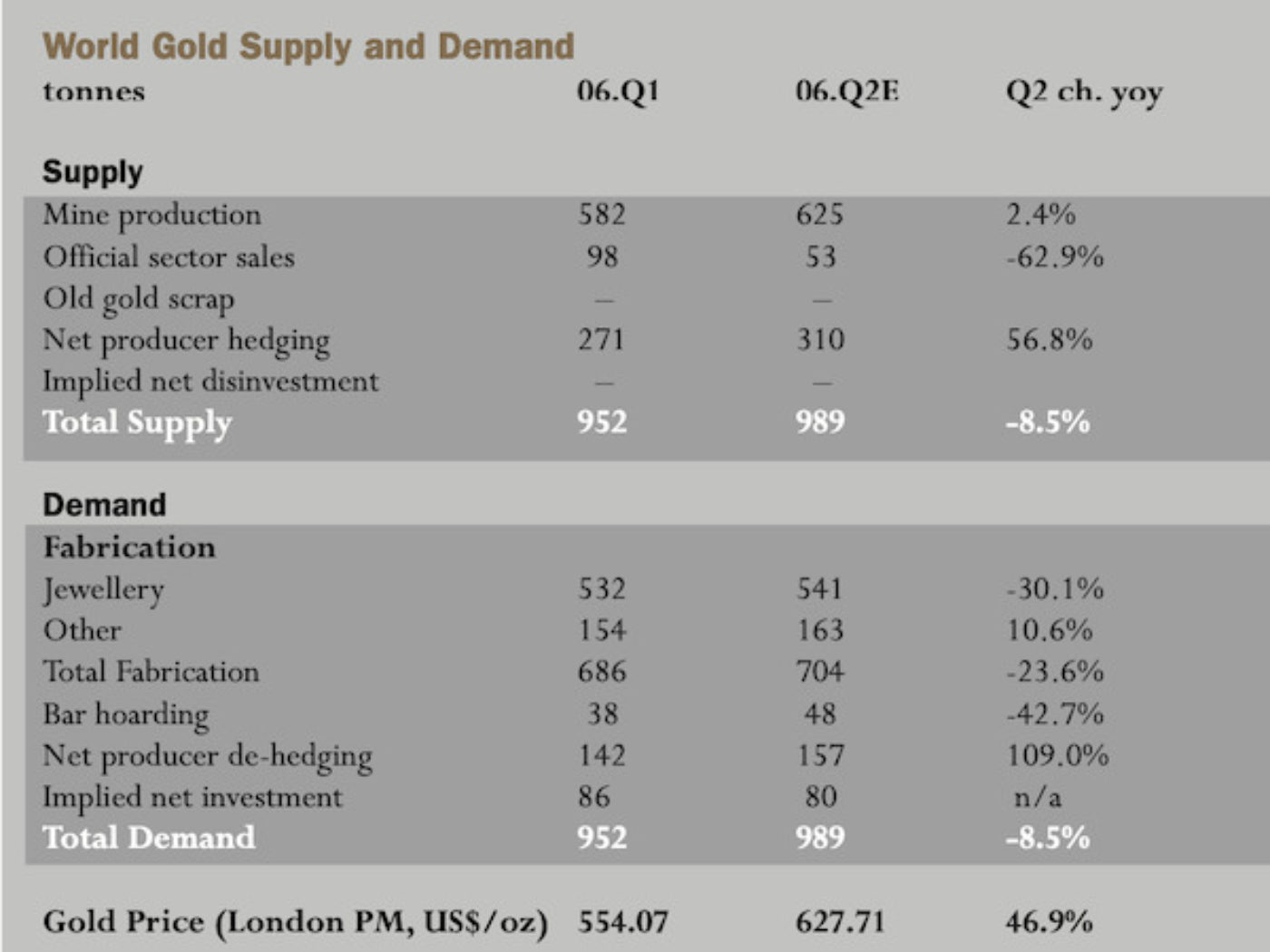 GFMS is a precious metals consultancy specialising in research into the global gold, silver, platinum and palladium markets. The company is based in London and has representation in Australia, India, China, Germany and Russia. The research team comprises eleven full-time analysts and two consultants.

© Copyright GFMS Ltd August 2006. All rights reserved. No part of this article may be reproduced, stored in a retrieval system or transmitted in any form or by any means without the prior written permission of the copyright owner. Brief extracts (excluding tables or graphs) may be reproduced only for the purpose of criticism or review and provided that they are accompanied by a clear acknowledgement as to their source and the name of the copyright owner.

Whilst every effort has been made to ensure the accuracy of the information in this article, GFMS Ltd cannot guarantee such accuracy.

Furthermore, the material contained herewith has no regard to the specific investment objectives, financial situation or particular needs of any specific recipient or organisation. It is published solely for informational purposes and is not to be construed as a solicitation or an offer to buy or sell any commodities, securities or related financial instruments. No representation or warranty, either express or implied, is provided in relation to the accuracy, completeness or reliability of the information contained herein. GFMS Ltd does not accept responsibility for any losses or damages arising directly, or indirectly, from the use of this article.