Italy’s Gold Districts: Is this the end of the crisis?

In recent years, ‘crisis’ has become the most common description of Italy’s gold sector, which since 2001 has seen exports fall off significantly. This article attempts to shed some light on the main competitive and structural problems in the Italian jewellery industry. 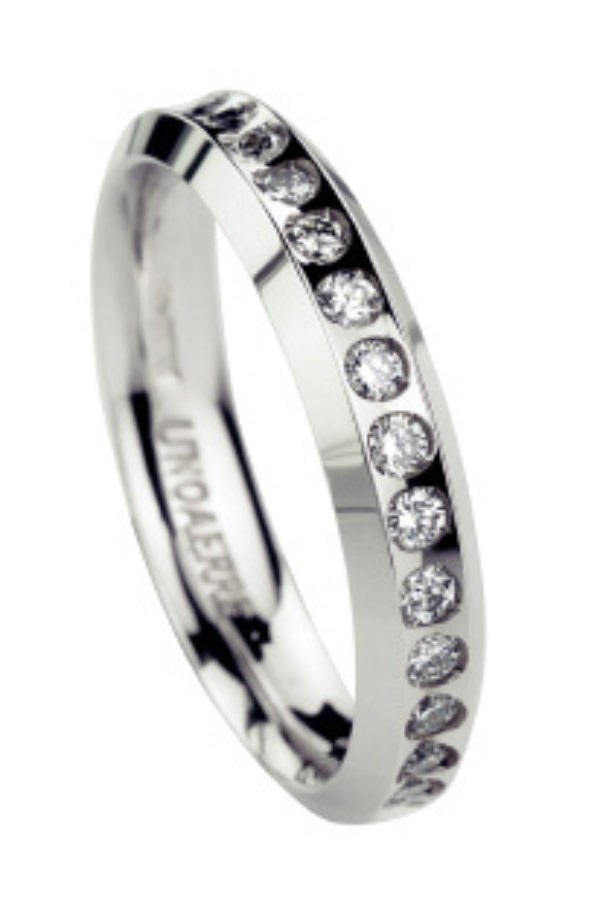 The export recovery seen in the Italian gold sector at the end of 2005 – and confirmed in 2006 – has attracted the attention of sector analysts, given that these figures might represent the first glimmer of hope after the severe crisis of recent years. Export data represent one of the few sources of information available to help monitor the economic situation in the gold industry, both at sector level and regionally. And despite a number of limitations, export statistics appear more accurate and informative than the figures on domestic demand or production where, as the operators themselves admit, there are many grey areas.

The word ‘crisis’ has become the most common descriptor of the state of Italy’s gold sector, which has seen exports fall off significantly since 2001. This, combined with sluggish domestic consumer spending, has led to a decline in production and job losses. The crisis was felt particularly strongly in some of the provinces where the historical ‘gold districts’ are located –Vicenza, Arezzo and Alessandria, where Valenza Po is located.

According to figures from the Vicenza chamber of commerce, the area’s gold district lost around 18% of its workforce (2,300 employees) and 17% in sales in the period from 2002 to 2005. Similar figures were recorded by the chamber of commerce in Arezzo, where there was a 15.6% decline in the workforce (around 1,620 employees, over the same period).In this article, I will attempt to shed some light on the main competitive and structural problems in the Italian jewellery industry to determine whether these recent figures may be interpreted as the end of the crisis (and if so, how), or whether they simply reflect the sharp rise in the international price of gold – in which case, the end is not yet in sight.

For some years now the Italian gold sector has been undergoing a period of crisis and transformation, mainly due to increasingly fierce competition in the international markets.

Given the weak economy and changes in the tastes and habits of consumers (especially those relating to purchases for special occasions), domestic demand was unable to offset the fall in exports, resulting in declining sales for companies (Figure 1).Following a particularly critical phase that lasted until 2003, during the last two years the sector seems to have stabilised, although it has not managed to regain the momentum it had in the 1990s. Both exports and sales remained broadly constant in 2004 and 2005 at the levels reached in 2003, before beginning to show signs of improvement at the tail end of 2005 – which were confirmed in 2006, as we shall see.

The slowdown in the sector was undoubtedly triggered by the collapse of the US market, which coincided with a recession caused by the bursting of the dot-com bubble and the after-effects of the September 11 attacks. The US had represented the Italian jewellery sector’s key market, accounting for more than a third of the sector’s exports in 2000.Although the decline in retail jewellery sales in the US market was confined to 2001, as Figure 2 shows, Italian exports to the US have continued to fall, accelerating their decline in 2003-2004 in tandem with the period that saw the dollar’s greatest devaluation against the euro.

The link between jewellery exports and the exchange rate trend is quite significant, both on account of the US market’s dominance (US imports are either sold on the fertile domestic market or re-exported) and because of the general tendency to use the US dollar as the benchmark for goods in this sector. Despite this, the strong euro is not enough to account entirely for the negative trend in Italian exports.

An analysis of gold jewellery’s share in dollars of the global export market (this product represents the bulk of Italian exports in the sector) shows the strong growth of new competitors (Table 1). India, China (including Hong Kong) and Turkey in particular have, in a short space of time, managed to make significant inroads in the market, rapidly eliminating Italy’s until-recently undisputed leadership. 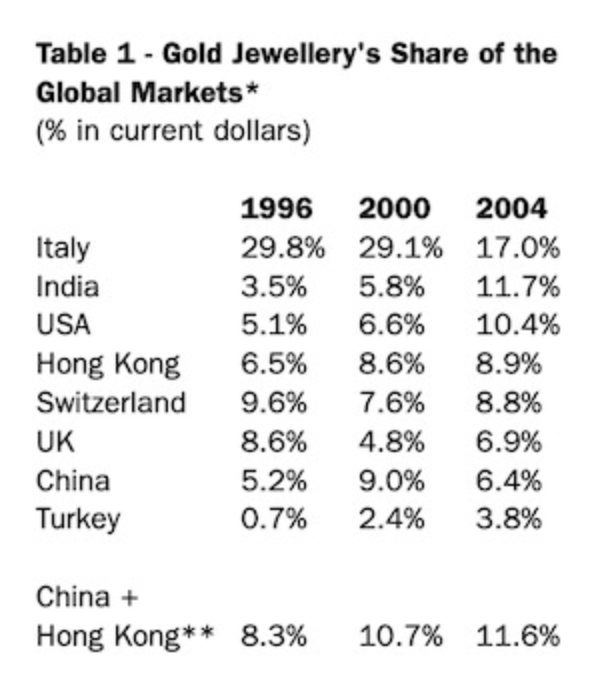 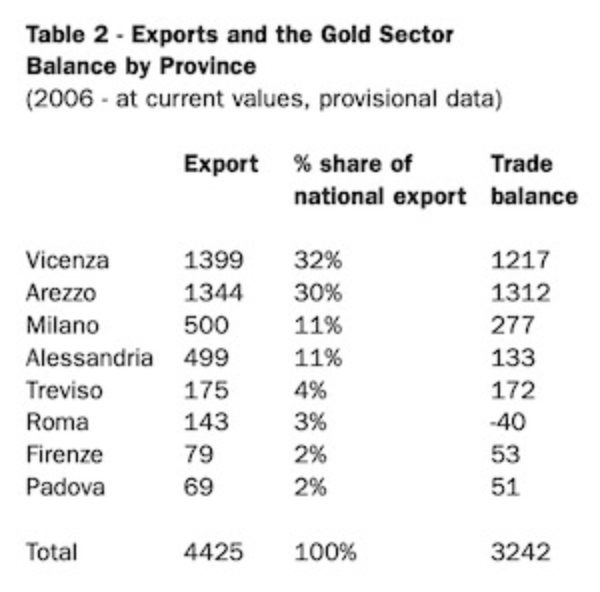 In addition to the countries with low labour costs, others ranked as main exporters, such as the US and the UK, are also among the biggest importers of jewellery (with 34% and 14% of global imports respectively), and often trade or re-export the products to other countries. Note also the role of Switzerland, a country with a strong watch-making tradition, which delegates a significant part of its gold work (e.g. bracelets and watch straps) to Italy: around 30% of Italy’s exports to Switzerland are re-exports, highlighting Italy’s role as the location for Swiss companies’ workshops.

The decline of Italy’s position vis-à- vis the US market has been even more dramatic (Figure 3). In 1996, Italian products made up over 30% of US imports. This has now fallen to 11%, according to provisional data for 2005, which saw the position of ‘leading overseas supplier of gold jewellery’ go to India, followed by China and Hong Kong. 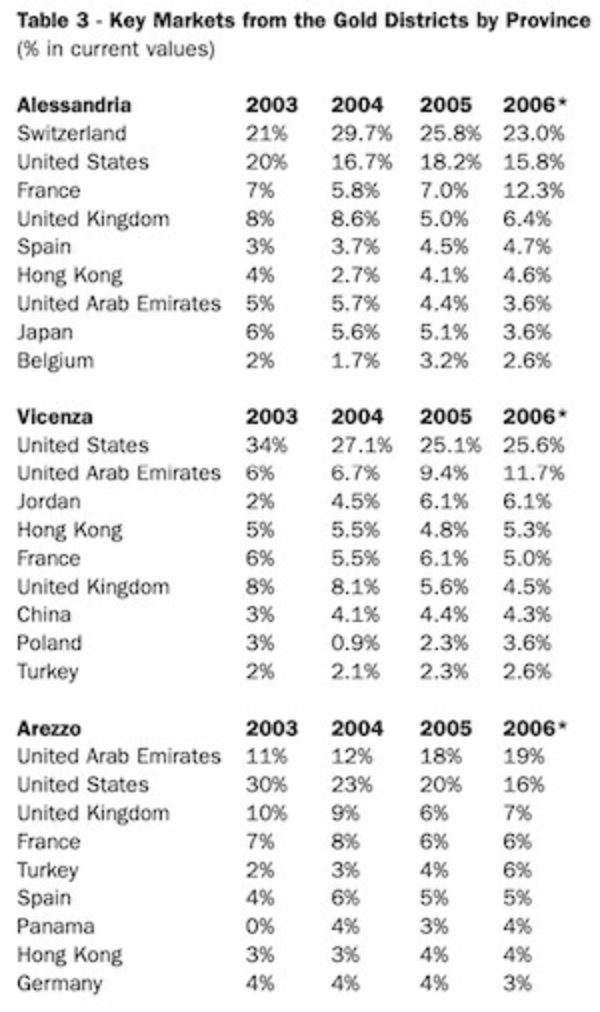 Source: Intesa Saopaolo from ISTAT data. Figures for 2006 are provisional.

Within the bigger picture of this rather complicated sector, the Italian provinces with a high concentration of goldsmiths (Vicenza, Arezzo and Alessandria) show differing trends, partly due to the varying features of their products and the main key markets.

Arezzo, Vicenza and Alessandria together account for nearly three-quarters of Italian exports; the figure rises to 85% if the province of Milan is included – an important centre for goldsmiths but not considered one of the region’s gold districts in the true sense of the term.

There are two other specialist regions in Italy, both in Campania: Tarì in Caserta, where an industrial centre dedicated to gold was set up, and Torre del Greco, the leading coral working centre. These are not, however, among the main exporters, given that they mainly focus on jewellery making for the domestic market, whether for the end customer or other Italian companies, which in turn may export the products.

Export growth in Arezzo, Vicenza and Alessandria showed signs of improvement as years rather than a proper recovery.

The situation in Alessandria, in particular, seems better thanks mainly to lower initial exposure to the US market compared with the other two provinces. The role of the US in Arezzo and Vicenza has also declined, as shown in Table 3, due partly to the dollar’s slide (at the same volume of sales, revenues translated into euros are lower), and partly to the severe loss of market share undergone by exporters on that market, as shown above. 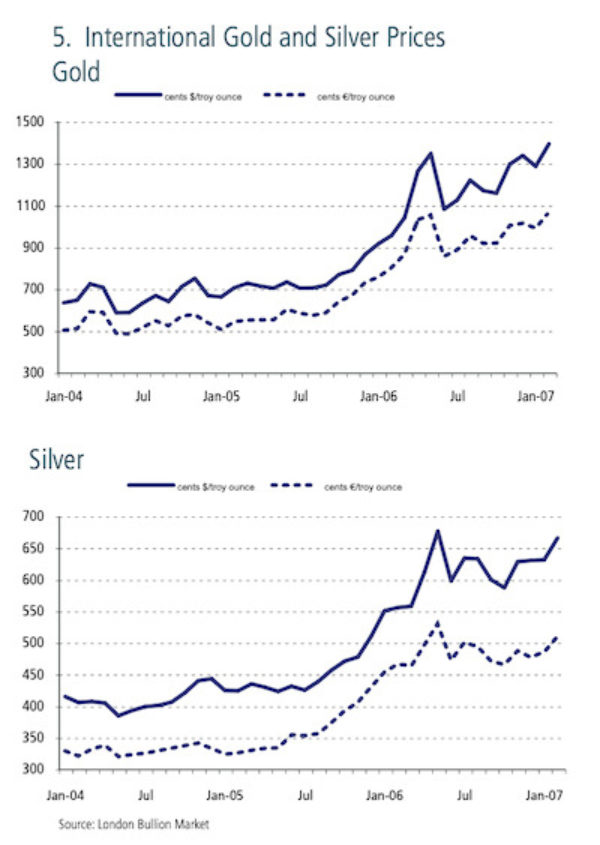 As the US has declined in importance for Vicenza and Arezzo, so has the significance of other countries grown, first among which is the United Arab Emirates. Thanks to its favourable customs regime, this country also acts as a platform for subsequent exports to other countries in the Gulf region and, to some extent, to Asia. The end of the decline and the first signs of recovery in some markets are therefore partly due to the ability of companies in this sector to reposition themselves at global level and find outlets to new destinations. It is only right to mention, however, that the growth recorded at current prices – which is moreover not enough to regain lost ground – is taking place in a strongly inflationary environment for the sector, caused by the surge in international gold and silver prices (as shown in Figure 5).

In the absence of provincial data quantities sold, total national exports show how in both 2005 and 2006, despite a stable or positive trend in export values, export quantities declined, indicating an increase in prices (the opposite to what was seen during the crisis of 2001-2003). However, this rise seems less than proportional to the price growth of the commodities used. 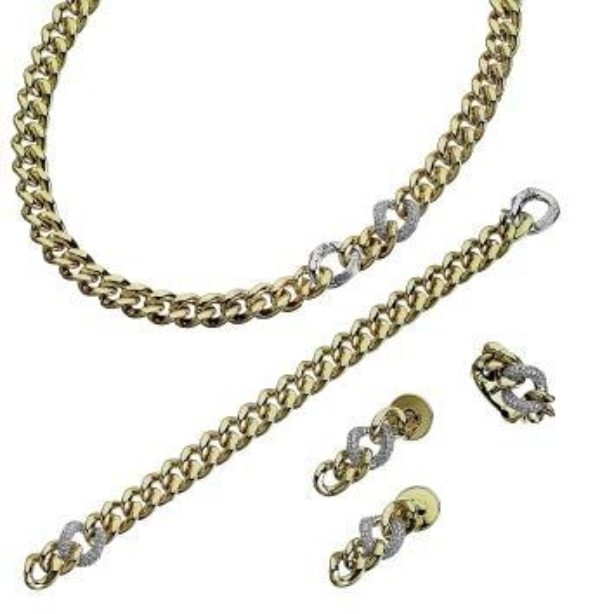 Amid Complexity, Some Positive Signs

As these observations indicate, the picture of the Italian gold sector and the main districts that make up its backbone is complex.

The decline in employment and in the number of companies in certain districts confirms the assumption that the once highly fragmented sector is still undergoing a major period of rationalisation. Some companies are seeking to form joint ventures, both with their former competitors in Italy as well as with companies in other countries, where production costs and export considerations may be more favourable.

Recognising the difficulty of competing with countries with low labour costs on the production of low-added-value products, some Italian manufacturers have begun to concentrate their efforts on high-end pieces, emphasizing the element of exclusivity in their marketing. And some fabricators have sought to tie in their designs with those of fashion houses.

The gold industry still has some weaknesses, such as its dependence on currency trends. The sector has also been at the mercy of the high and volatile precious metal prices seen over the last year, which have curtailed jewellery purchases on a global basis.

While it is difficult to confirm that the recent growth is the precursor to a real recovery, there are signs that the basic picture is improving, and it is clear that the industry has begun to address the challenges it faces going forward.

Stefania Trenti is an analyst at the Research Department of Intesa Sanpaolo. She is responsible for coordinating the research activity on industrial sectors, concentrating on forecast and analysis for major Italian industries and local districts.