The Open Casting of Silver Bars

The decision by the London Bullion Market Association to insist that, from 1 January 2008, only open-cast silver bars will be accepted as London Good Delivery is welcomed on health and safety grounds. The proposed change was mentioned in a paper given by LBMA Chief Executive Stewart Murray at The Fifth China International Silver Conference, held in Panyu, Guangzhou, in September 2006.

By comparison with open casting, the casting of silver bars in closed (or gated) moulds results in a sprue that needs to be removed, normally by the use of a guillotine. However, this can produce a relief at the end of the bar, which invariably has sharp edges. This method of casting can also produce some porosity and cavities, which, if the ingot is water quenched, could allow water to be present within the bar. If one of these ingots is remelted, this trapped water could cause a very dangerous steam/molten metal explosion.

The LBMA requires that a silver bar be of good appearance. Faults that should be avoided on the top include irregularities such as surface cavities, layering and excessive shrinkage. The sides and bottom surface should be smooth and free from cavities, excessive layering and bubbles. The bar should also have rounded edges, be easy to handle and be capable of

being stacked safely. The move to open casting for all silver bars might be a challenge to some refineries that at present use closed-mould casting. A general discussion on the open casting of silver is outlined below. 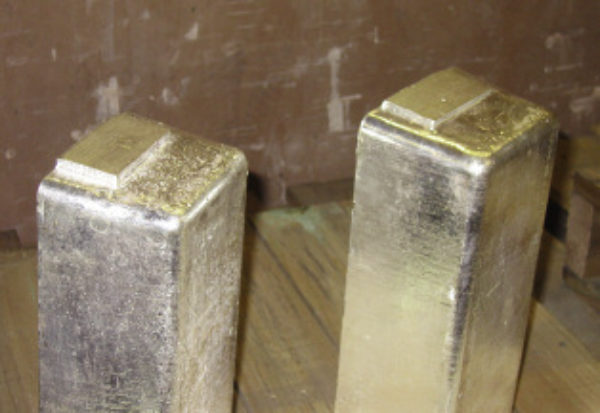 Silver bars cast in a closed mould will have a sprue on one end. This is part of the gating system that feeds molten silver into the mould cavity. The sprue is normally guillotined off, producing a relief at the end of the bar, which can have sharp edges, making the bars dangerous to handle.

The starting point for most refineries is the silver cathode from their electrolytic silver refinery (ESR). This ideally should be bright in appearance and granular, which will make it easier to wash and dry. The analysis of the output would, in most cases, be nominally 9999 silver, with trace levels of other elements.

Certain impurities that might be present in the anode feed – typically bismuth, antimony and tellurium – can create a mushy-type of output, which would be difficult to wash free of electrolyte and, during melting, might absorb higher levels of oxygen. If there are real problems with the levels of some of these impurities, then double refining (through the ESR) could be an option, although there would be time and cost implications with this approach.

The LBMA does not set maximum acceptable levels for impurities in the final bar, but seeks to ensure that they are within appropriate limits. It has been known for a long time that molten silver will absorb oxygen from the air and will “spit” on solidification (Reference 1), causing top-surface appearance problems. If oxygen is an issue, a reducing flux cover could help. Although forced chilling of the ingot surface can reduce oxygen evolution and shrinkage, the bar produced can be porous. Therefore this process needs to be carefully designed, engineered and operated.

Shrinkage can also be reduced by placing a cover over the mould and the molten ingot, which is removed after the bar has solidified.

Layering (stratification down the sides of the bar) gives the impression that the silver has been allowed to partially cool, then further molten silver has been added to the ingot. This effect can be reduced by pouring into the warmed mould in one smooth, timely operation. The mould must be level – wedge- shaped bars are difficult to stack and pack safely.

Other factors that can influence the overall appearance (including layering, shrinkage and oxygen evolution) of the cast ingot occur during the melting and open casting. They are:

Most refiners are skilled at melting and casting, and the change to open casting simply presents a different set of factors and parameters to address.

It is worth stating that once the bars are cast and cooled, it is crucial that they be packed securely on a sturdy wooden pallet, suitably strapped, so that they do not move when transported: health and safety concerns about the packing and shipment of bars are equally important.

In terms of the open casting of gold bars – either as small bars or Good Delivery bars – the casting presents fewer problems, although some deleterious elements can cause appearance problems. There is, however, no oxygen issue.

The move to the open casting of silver bars brings several health and safety benefits. Some refineries will need to modify their method of melting and casting, but this should not present too many problems if the issues mentioned above are considered. They should not, however, forget the importance of good secure packaging.

Reference 1 – The Solubility and Rate of Solution of Oxygen in Silver, by E.W.R. Steacie and F.M.G. Johnson. McGill University, Montreal. Proceedings of the Royal Society of London, Series A. 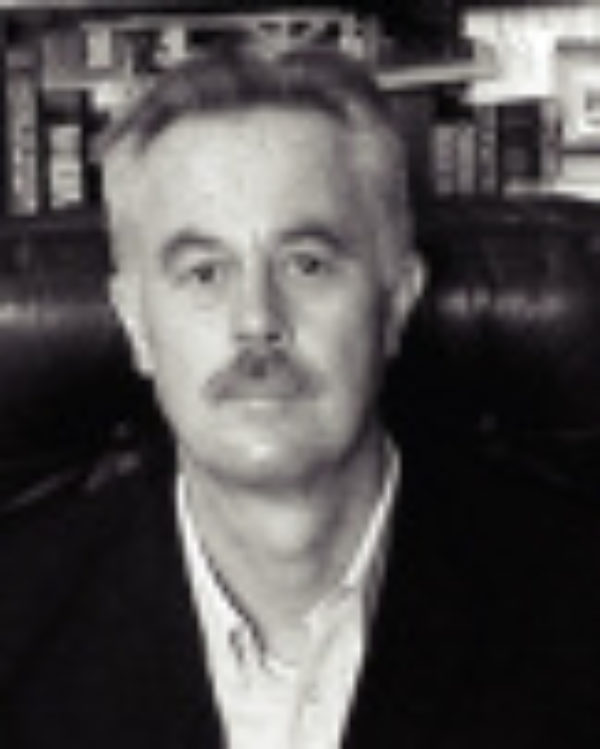 David Stokes, a Chartered Chemist and a Member of the Royal Society of Chemistry, has over 30 years of experience in the refining and processing of gold and silver. He is now an independent consultant.

During a three-decade career at Johnson Matthey, he was Operations Manager for the refining of gold and silver and then, with the addition of the Platinum Group Metals Refinery, he was named Refineries Manager.

Prohibition on the Use of Closed or Gated Moulds

From 1 January 2008, it will be mandatory for all Good Delivery bars to be produced using open moulds – and the use of closed or gated moulds will no longer be acceptable. Over the last two years a lot of problems have been experienced with silver bars produced using closed or gated moulds. Insufficient care has been taken in removing the residual casting sprue, leaving very sharp edges, and in some cases this method of casting has resulted in large cavities that, if water is used to cool the bar, can result in water being trapped in the bar, which can cause an explosion when the bars are subsequently melted. In both cases, the increased emphasis on compliance with health and safety requirements has meant that it was no longer practical to continue allowing the use of such moulds for the production of Good Delivery bars.

To bring some standardisation to the shape of both gold and silver bars, and make handling and stacking easier, the LBMA is recommending that the undercut (the degree of slope) on the sides and ends of Good Delivery bars should be within 7 and 15 percent on the length (the longer elevation) and between 15 and 30 percent on the width (the shorter elevation).The undercut is calculated as the top-edge dimension less the bottom-edge dimension, with that figure being divided by the top-edge dimension and the result being expressed as a percentage. The LBMA has conducted a comparison of bars produced by Good Delivery refiners, and the vast majority of brands already fall with the recommended ranges.

Gold bars must be stamped on the larger (top) surface. Silver bars may either be stamped on the larger top surface or the end of the bar, but if end stamping is used, then only the dot matrix method is acceptable. The bottom stamping of bars will be prohibited for all new Good Delivery applicants immediately and for all existing Good Delivery refiners with effect from 1 January 2008. Bars stored in the London vaults are traditionally stacked with the larger surface uppermost. Therefore the prohibition on bottom stamping will remove the need to flip the bars over in order to read the marks. This will significantly reduce the amount of handling required in processing deliveries of bars.

Bar numbers must not comprise more than ten digits or characters, as many computerised systems producing weight lists cannot cope with longer numbers.

The bar marks must include the year of manufacture as a four-digit number – unless incorporated as the first four digits in the bar number. If bar numbers are to be re-used by a Good Delivery refiner each year, then the LBMA strongly recommends that the first four digits represent the year of production (although a separate four-digit year stamp may be used in addition).

The LBMA has also made various recommendations for the packing of gold and silver bars. These are set out in Annex G to the Good Delivery Rules. Basically, bars should be packed not more than one tonne to a pallet on sturdy timber pallets such that laden pallets can be stacked six high. Plastic pallets are not deemed to be suitable. Bars should be securely strapped so that they do not readily move on the pallet. As always, before making changes to the Good Delivery Rules the LBMA have consulted with refiners and the London vaults, and taken their views on proposed changes into account in order to minimise the impact on Good Delivery refiners.

The revised June 2007 edition of the Good Delivery Rules is available at: http://www.lbma.org.uk/GD Rules 200706.pdf.