Where More is Less: Clearing Transactions are on the Rise, Albeit Much Smaller in Size

The monthly clearing statistics published by the LBMA are a very useful barometer of activity in the London OTC gold and silver markets. Unfortunately – unlike conventional exchange volume numbers, which record every lot traded – clearing statistics only capture the end-of-day transactions between the clearing accounts. All transactions that take place over the course of the day between any two given counterparts are netted at the end of the day and a single transfer of the net amount is made.

Clearing statistics are not, therefore, a true representation of the absolute turnover in the market. In fact, the methodology by which the statistics are collected clearly underreports true trading activity in the London bullion market. However, even allowing for the limits of the coverage, there are some useful themes emanating from the data, especially in light of the move towards increased transaction activity in 2007, which was especially true for gold late in the year. Indeed the number of transfers in gold in November reached a record average of 2,165 per day, with the daily average cumulative ounces transferred reaching 25.2moz, the highest level since mid- 2006.The average daily value of $20.3 billion also reached a record (for more about how the statistics are calculated, see ‘About the Figures’). 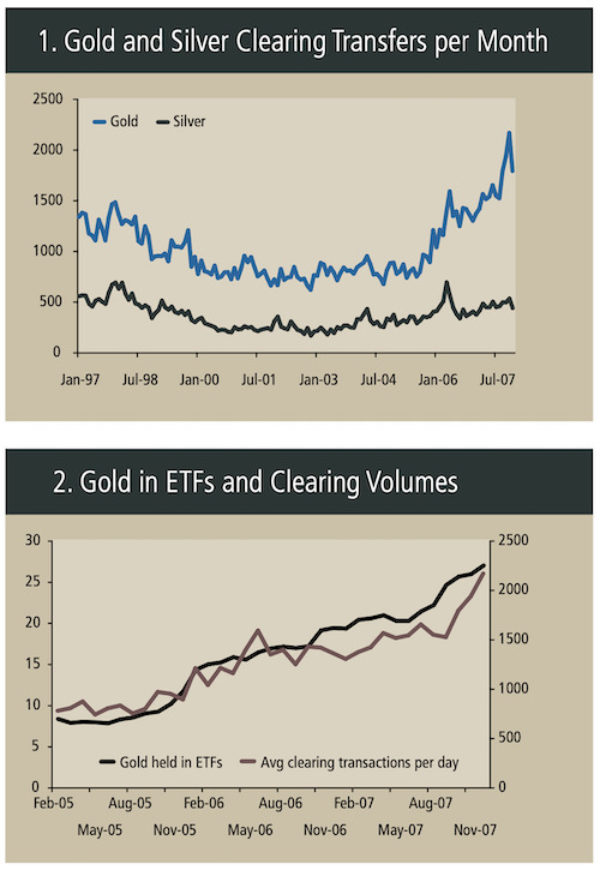 It is interesting to note that while the number of gold clearing transactions per day escalated sharply in 2007, this was not the case for silver –although the annual average number of transfers increased year-on-year, the level remained well below that seen in 1997-1998, when clearing statistics were first published. November 2007 – the month in which gold transfers reach their record high – was not a bad month for silver either – there were 533 transfers per day, the highest level for the year. This was a solid 40% up from November 2006 but, as shown in Chart 1, was well below the March-May period in 2006, when the average number of daily transfers was nudging 600 per day, with the highest number of transfers recorded in April that year.

What might have been the cause of the increase in the number of clearing transfers in silver during that time? March to May 2006 was the period when spot silver prices rocketed from under $9/oz to above $15/oz, a multi-decade high that was only exceeded in late 2007.The driving force behind the rampant silver price was most likely speculative buying/market positioning ahead of the release of the iShares silver ETF, which grew rapidly in size through the Q2 and Q3 period. Subsequently the silver ETF has posted very subdued, incremental growth in ounces that has, as indicated in the data, caused little end-of-day dislocation between London clearing accounts.

Meanwhile the gold ETF sector continued to grow at a far faster pace during 2007, and this may be largely responsible for the sharp increase in the number of clearing transfers. The aggregate number of ounces held by the main gold ETFs (Streetracks, iShares,Lyxor/GBS, ASX, ETFSecurities and NewGold) is shown in Chart 2 below, against the daily average of clearing transfers in gold.

The manner in which ETFs influence clearing statistics can be described thus: when a customer buys a share in a bullion ETF, it can be delivered from one of two sources – an ETF share trading in the secondary market or, if there are none available at the broker level, through the creation of a new share through the purchase of gold or silver via the OTC market. When the market is growing, this leads to the constant creation of ETF units and, in turn, likely leads to imbalances between the bullion banks that supply the gold and the custodian holding the gold. These imbalances need to be netted end of day. 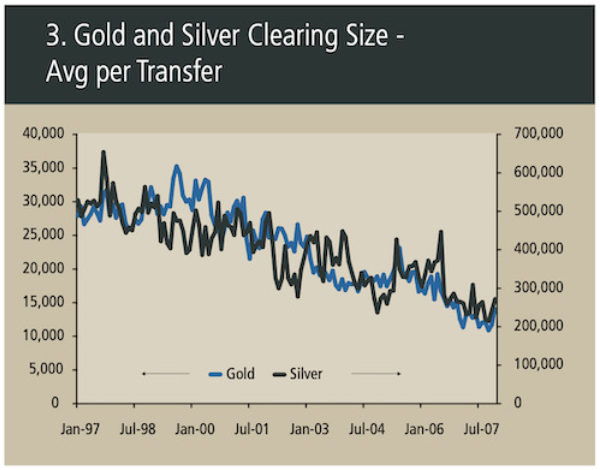 The creation of ETFs in the gold and silver bullion markets accordingly has helped to increase the number of clearing transfers, but these have been significantly smaller in size than those of the late 1990s. And in reality this makes sense, as the ETF sector features buyers, generally of a retail nature, all of whom are likely buying only modest parcels of bullion, thus leaving the clearers with relatively small end-of-day netting transactions.

Another potential reason why there are more transfers may be because there are now considerably more participants in the OTC bullion market relative to the late 1990s, evidenced by the increase in the number of new Members and Associates in the LBMA. Over the past three years, a total of 18 companies have joined the LBMA membership, ten of these during the last year. Many if not all of them are likely to have end- of-day imbalances with other counterparts in the system, albeit ones that are smaller in size.

A change in the business model of bullion banks towards consignment accounts may also help explain the smaller size of transactions between the clearers, a trend that has been present for the past few years. As Peter Smith explained in an article in Alchemist 32, ‘When customers purchase out of the consignment account and the metal is hedged loco London, these transactions tend to occur in small increments, so that might contribute towards a lower number of ounces per transfer on average’.

Another logical – and very important – reason why the size of the transfers in both gold and silver has declined in recent months is the slowdown in the pace of producer hedging. The global gold hedge book (i.e. gold sold forward on a delta-adjusted basis) is currently around 30moz– significantly lower than the 100 to 110moz seen in the late 1990s/early 2000s.The hedge book peaked in the early 2000s as gold producers rushed to hedge future production, which itself was being boosted at that time through technological advances and exploration-driven growth in new mine supply.

Less producer hedging means less gold being leased from the central banking system, leading to lower lease rates and, in turn, less large-scale spot market activity. Indeed the collapse in lease rates, which remain at historical lows in spite of the upwards move in interest rates in the wake of the subprime / liquidity crisis, has served to generally undermine ‘traditional’ activity in the gold market. The introduction of ETFs and gold’s thematic value as a refuge in troubled financial times have partly turned the tide of softer activity in the London bullion market, but aggregate end-of-day clearing volumes look likely to remain lower for the medium term, certainly until a cyclical rebound in producer hedging activity takes place.

The figures – released monthly as a narrative overview with supporting charts – detail the volume (in millions of troy ounces) transferred on average each day, the US dollar value of that volume (applying the monthly average London pm fixing price for gold and the average London spot fixing price for silver) and the average number of transfers each day. In order to minimise double counting, the clearers only record the debit side of each transaction. The figures consist of:

Excluded from the statistics are:

Michael Jansen is an Executive Director at JPMorgan. He has been at the firm since October 2006 and is responsible for research coverage of the base and precious metals markets for the bank’s Global Commodities Group. Prior to joining JPMorgan, he worked for National Australia Bank in Sydney and in New York, responsible for commodity and financial markets research and the marketing and structuring of commodity derivative products for corporate and institutional clients. Michael’s a broad experience in commodity markets comes of having held a variety of roles of increasing responsibility in metals and agriculture over the past 13 years.