Gold, the US Dollar and G7 Central Banks

From its $255.50 low, the gold price has rallied by approximately 290% over the past seven years - marking not only the most durable gold price rally in history but, in US dollar terms, the most powerful since gold become freely floating in 1971. However, the sudden price pullback across the precious metal complex during March has raised concerns that the bull run in this sector has drawn to a close.

Although the gold price had been rising before August 1971, we take this as the start point for this rally since it marks the date the US government informed the IMF that the US dollar would no longer be convertible into gold. This consequently led to the collapse of one of the main pillars of the 1944 Bretton Woods system. Highs and lows in the gold price relate to closing prices. Source: DB Global Markets Research. 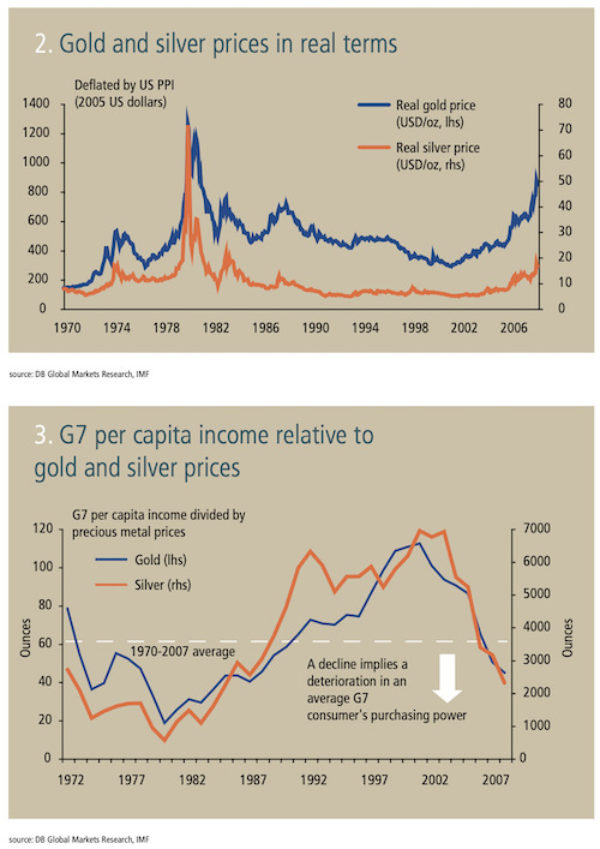 We disagree. We believe US interest rate and exchange rate trends remain bullish, and are therefore positioning for the dollar to retest its all-time lows – and for the gold price to move above $1,100 by the end of 2008.

The dollar, interest rates, equity markets, producer de-hedging, strong fabrication demand and geopolitical risk have all been working in favour of the gold price at some point during this decade. Of these, we believe the most powerful has been the dollar. In fact, we find that the dollar trade- weighted index (DXY) started its long-term downtrend in May 2001, which almost exactly coincides with when the gold price began its long upward march. Indeed, since April 2001 the gold price has risen by almost 300%, and approximately $750 – the most powerful rally since the gold price became freely floating in 1971. In terms of duration, this rally is now seven years old, and consequently also represents the most durable rally in recorded history (Figure 1).

Even so, in real terms, and relative to per capita income, precious metal prices still remain cheap on an historical basis. While gold and silver prices in nominal terms have been rising steadily for the past few years, in real terms they are still trading below the highs hit at the beginning of the 1980s. For gold and silver prices to hit their all-time highs in real terms today would require nominal prices to rise to $1,415 and $80, respectively. If the period of market manipulation in the silver market during 1980 is excluded, then the silver price would need to hit $34. 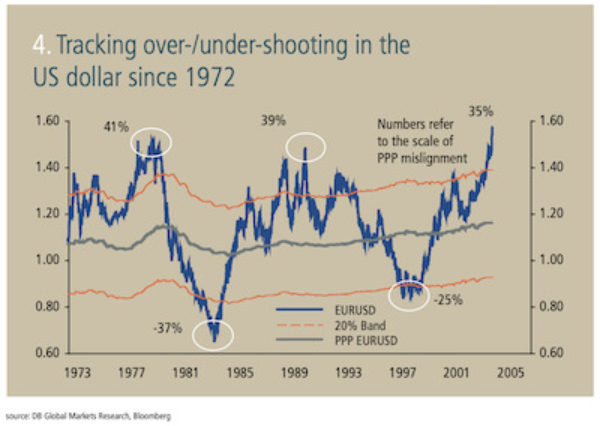 We expect the course of the dollar will continue to play an important role in driving the gold price. In March it fell to a new lifetime low against the euro, and we expect EUR/USD to rise further.

However, such a misalignment in the dollar should not be considered unusual: an overshooting in the dollar has been a typical feature at the end of every dollar cycle since1972 (Figure 4).

In fact, the euro would need to rise above 1.64 for it to push the dollar to its most undervalued level versus Purchasing Power Parity since the birth of floating exchange rates in 1972. Consequently, we believe investors need to consider at what point the dollar is set to embark on a new long-term uptrend since, when this occurs, it is likely to be ferocious. Since 1980, we find that in the first year of a dollar turn, the greenback moves by on average 27% in the first year and a further 14% and in the same direction in the second year (Figure 5).

For gold and silver prices to hit their all-time highs in real terms today would require nominal prices to rise to $1,415 and $80, respectively. 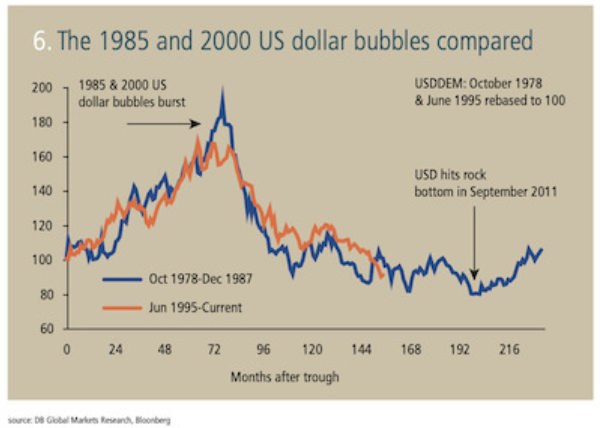 To assess the likely timing of a new long-term uptrend in the dollar, we examined past turning points in the currency and found six valuable lessons, of which the majority suggest that an imminent turn in the dollar is unlikely:

1 – Turning points in the US dollar have been asymmetric such that downturns from up- cycles have been inverted (V-shaped) while upturns from down cycles have tended to be preceded by an extended bottoming-out period. Put another way, US dollar bear cycles tend to be more durable than bull cycles. This would imply that a new long-term uptrend in the US dollar may be several years away.

Assuming this dollar bear cycle conforms to historical averages, then it would imply the US dollar will not embark on a new long term uptrend until August 2010, or 8.5 years.

Alternatively, if one assumes the current US dollar cycle will continue to track the 1985- 1995 US dollar cycle, then it implies the US dollar only hitting rock bottom in September 2011 (Figure 6).

2 – Bull cycles have typically been preceded by a significant narrowing in the US trade deficit. Although the US current account deficit has fallen from 6.2% in 2006 to an estimated 3.9% of GDP in 2008, the deficit still remains large. We believe this will constrain a turnaround in the US dollar’s fortunes for the time being.

4 – A trend reversal in the US dollar has historically been associated with longer-term turns in capital flows. However, US credit markets have been the primary channel of capital inflows into the US in recent years. Consequently ongoing stress in the US credit and housing sectors are expected to hinder a turnaround in US capital flows in the near term.

6 – Every turn in the US dollar since 1978 has coincided with aggressive rounds of G3 foreign exchange intervention. Dollar weakness may not yet be a policy headache for public sector authorities, as it assists in dampening inflationary pressures in Europe in a rising commodity price environment while it helps cushion the slowdown in the US economy. As a result, we believe investors should only position for dollar strength or at the very least stability in the US dollar exchange rate when central banks start intervening and buying the US dollar. 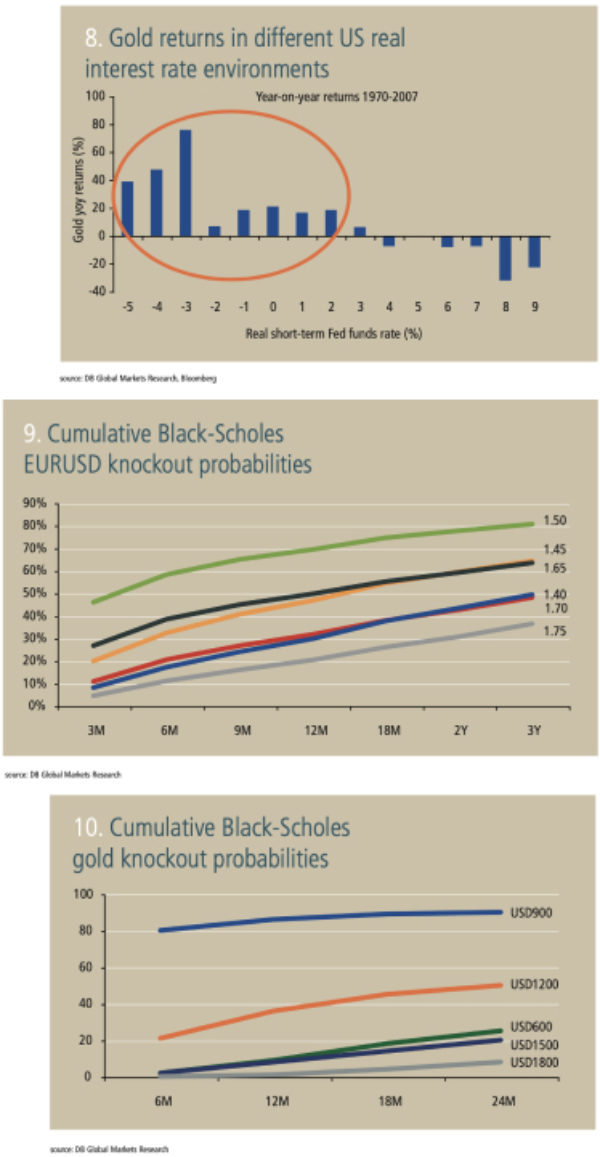 We believe weakness in the dollar has not been exhausted, and with US real interest rates expected to move deeper into negative territory, we are maintaining our bullish outlook towards gold and silver prices.

However, given the increasing maturity of the current dollar cycle and the non-negligible risks of a looming dollar crisis, we believe central banks may be poised over the coming year to intervene and rescue the dollar with aggressive rounds of FX intervention.

The options market continues to take a relatively relaxed view towards a sustained strengthening in the dollar. In terms of cumulative Black-Scholes EUR/USD knockout probabilities, the options market attaches a 75-80% probability of EUR/USD trading at the 1.50 level over the next two to three years (Figure 9).

The options market is also indicating that the rally in the gold price over the past few years is unlikely to unravel, and it attaches an 80% probability of the gold price trading at the $900 level for the foreseeable future (Figure 10).

We believe investors need to consider at what point the dollar is set to embark on a new long-term uptrend since, when this occurs, it is likely to be ferocious. 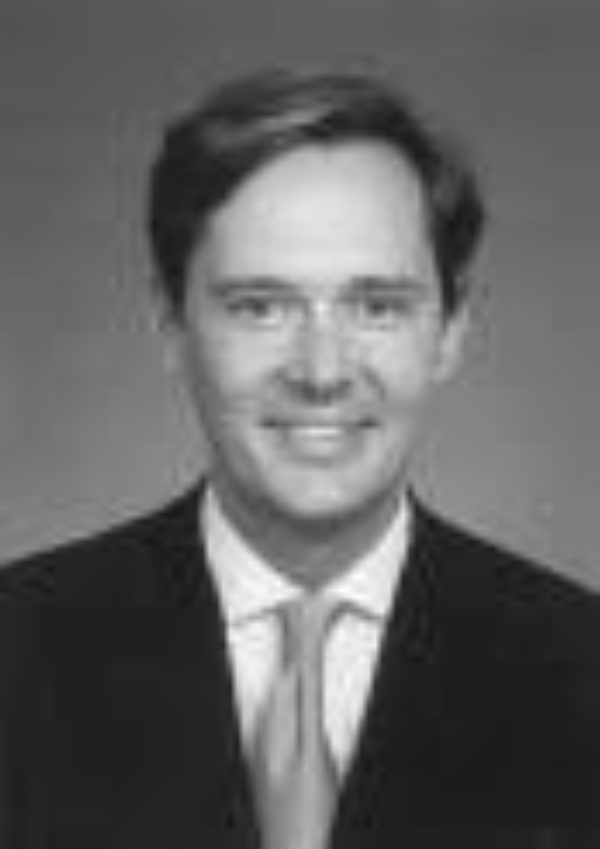 Michael Lewis is a Managing Director and the Global Head of Commodities Research at Deutsche Bank. He joined the bank in 1990. His group analyses the macro-fundamental forces driving commodity markets, delivering directional, curve and volatility trading strategies, with particular focus on the global energy, power, industrial metals, precious metals, agriculture, freight and coal markets. The group also examines the properties of commodities as an asset class, as illustrated by a number of award-winning commodity index products. Michael holds a BSc in economics from the University of Bristol and an MSc in economics from the London School of Economics.