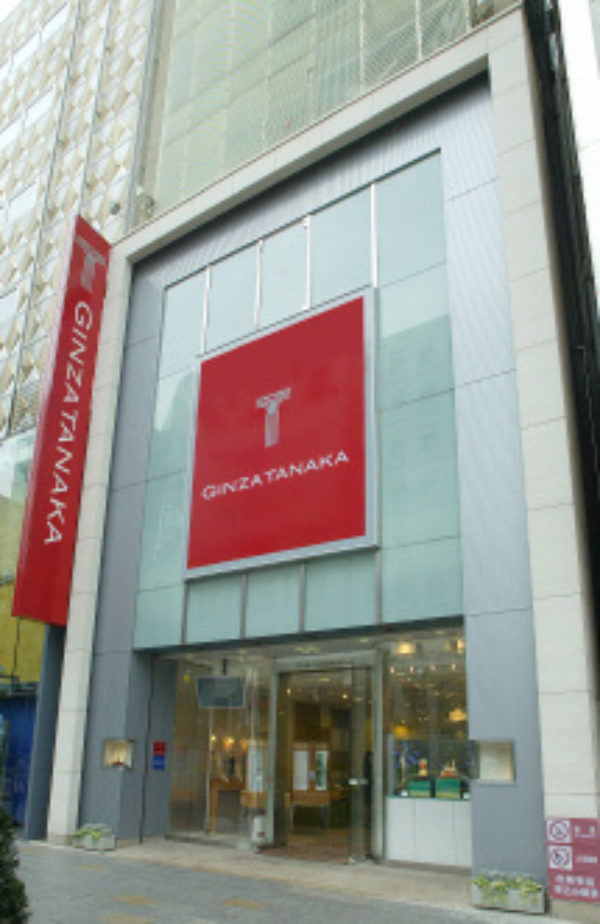 The View from the Field

Thursday, 10 January 2008, is a day unlikely to be forgotten either by ourselves or by the Japanese precious metals market. A queue of several dozen people formed outside of Tanaka Ginza, the main store of Tanaka Kikinzoku Jewellery (TKJ, the group member responsible for sales of precious metal jewellery and investment-grade bullion to consumers), well before the store was due to open. As soon as they were able to enter, these customers rushed to the bullion sales counter on the third floor. Many came in groups: couples, siblings, families. In age they ranged from 20 or so to well over 70, and almost all of them were carrying bags and backpacks that looked to be heavy. Inside those bags were gold bullion and coins, platinum bullion and coins, precious metal jewellery and precious metal handicrafts. All were now offered for sale.

While we had been seeing some selling as the price rose last autumn, on that day we had not expected to be swamped with so many sellers at once, and neither our facilities nor our staff were adequate to the task. The result was an unfortunately long wait between reception and completion of the transaction. On an ordinary day, we can have a customer in and out in about 20 minutes, but on that day the average wait was in excess of three hours.

The congestion and the wait only grew worse as the day progressed. The store officially closed at 4:30 pm, but it was another eight hours until the last customer left – 12:00 midnight. It goes without saying that we did our best to make people comfortable during their wait, offering beverages and snacks and arranging for taxis to take the late-leavers home. Most sat patiently on the chairs until their number was called. There were surprisingly few complaints. 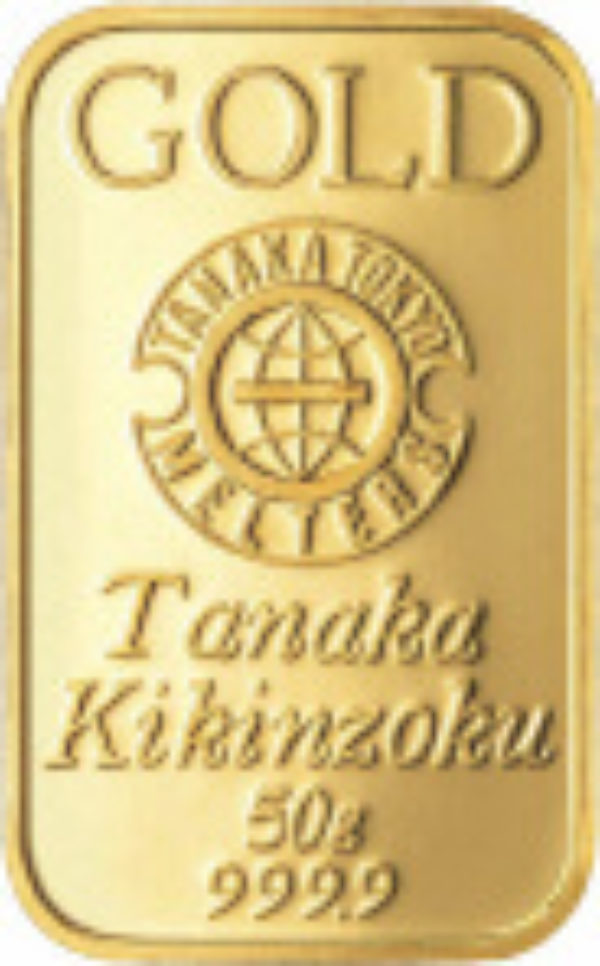 At all of TKJ’s other stores elsewhere in the country – Shinjuku, Yokohama, Nagoya, Osaka and Fukuoka – similar scenes were reported. In total, more than 1,600 customers came to TKJ stores that day. This does not include the customers who went to the 138 agent shops we have around Japan to handle precious metal trading in other areas. They too were swamped – in excess of 3,000 consumers visited our network which, during the course of the day purchased more than two tonnes of gold from customers, and that does not include other precious metals. Indeed, it was not uncommon during January and February for the six directly owned TKJ stores to see more than 1,000 customers a day, and the situation continues as of this writing, at the end of March, as current price levels continue to attract selling. 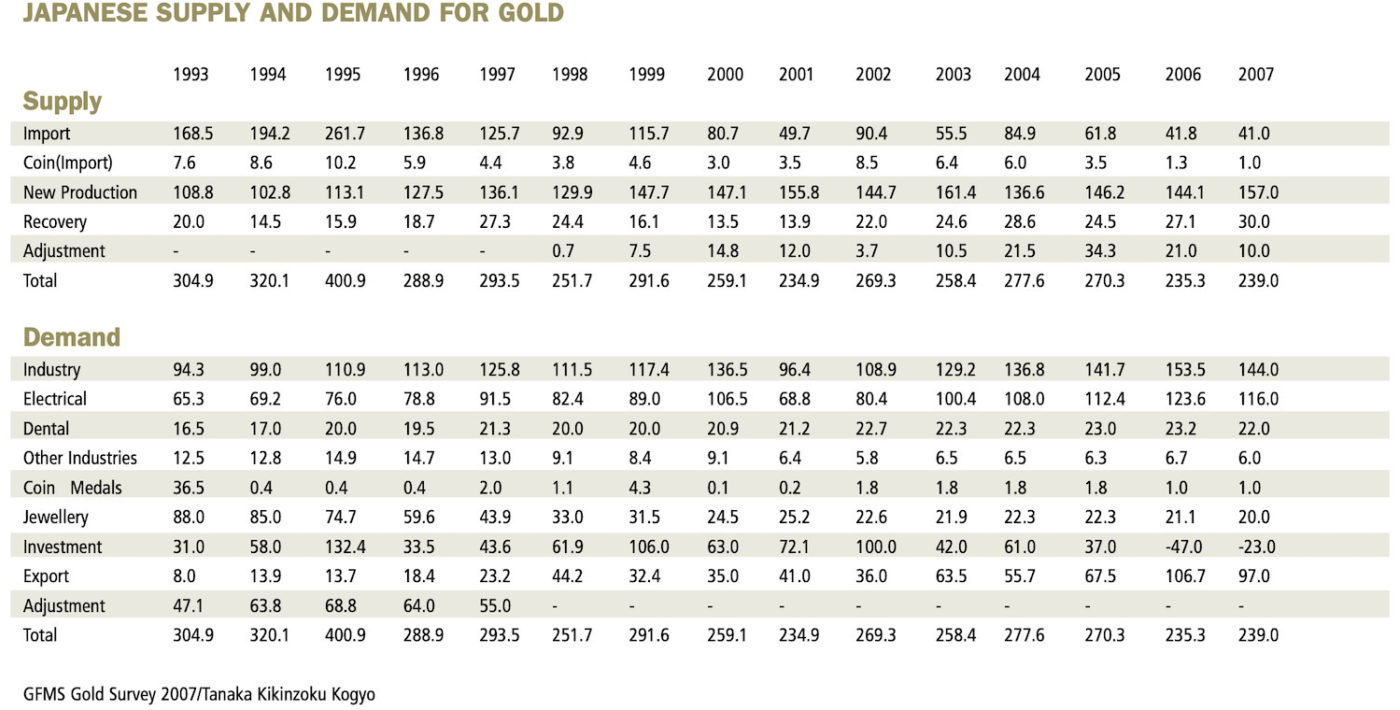 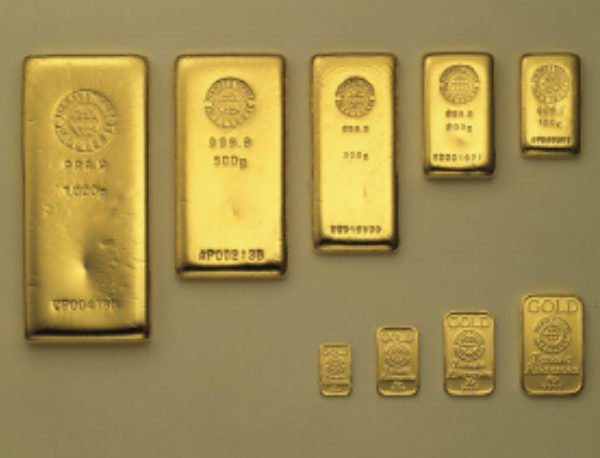 Japan deregulated gold imports in April 1973 and exports in April 1978.The metal can be traded freely today: anyone can buy or sell. Ever since deregulation, ordinary Japanese consumers have gradually become more aware of gold bullion as an asset to be held and, in some cases, an investment instrument to be traded for profit. Japan has in fact experienced a number of gold investment booms. 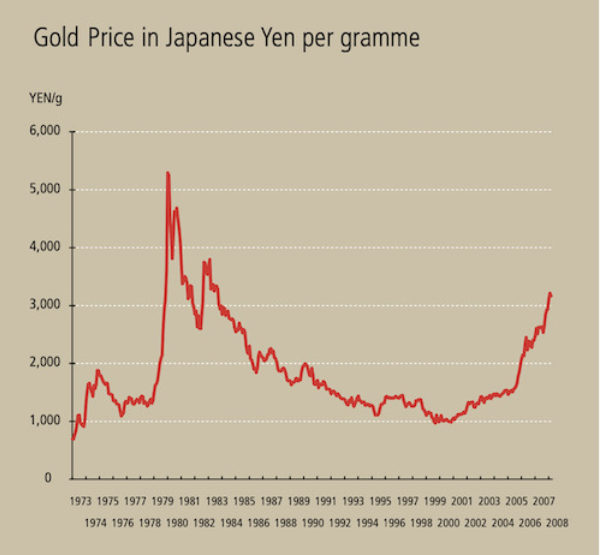 We keep records of precious metals trading on the general investment market and have charted the market’s booms. The current one – the 14th among Japan’s gold rushes to buy or to sell – began in October 2007 and culminated with the flood of customer sales we are seeing today. In October of last year, the domestic Japanese gold price was 2,900 yen per gram. In November, it crossed above the 3,000- yen line for the first time in 24 years.

The previous 13 booms were triggered almost entirely by ordinary consumer purchases of gold bullion at certain key price levels. The last boom in consumer sales of gold occurred between 17 November 1981 and 9 September 1982 as the domestic gold price rose from 2,990 yen to 4,220 yen per gram. Other than that period of time, when consumers purchased and sold shortly afterwards, they have been consistent purchasers of gold for the last 30 years or so. Indeed, the Japanese gold price bottomed out at 917 yen per gram on 17 September 1999, so those who purchased with the expectation of turning a profit on their gold have not had any opportunity to sell, so they have been holding onto their purchases. The recent surge in gold prices has finally given them the chance to unload their investments.

Consumers who purchased at each of these junctures were clearly looking to sell once prices rose. The current boom represents the first opportunity in 24 years for those who purchased at a variety of prices below 3,000 yen to be able to take a profit. Given how long they had to wait for the price to rise, it’s perhaps not surprising they were willing to wait patiently for a few more hours in our stores. Looking at this phenomenon, we think that the next sales boom will probably occur when the price rises above the 3,500 yen/gram line, and that there will be another when it surpasses 4,000 yen/gram.

In addition to price movements, stories in the mass media also influence gold trading.The trigger for the upsurge in customers on 10 January (later termed a ‘fever’) was a story that ran on the NHK television station (Japan’s public broadcaster) during its news show about the rise in gold prices. Other TV stations and newspapers have also covered soaring gold prices. The result was that consumers were reminded about the gold they purchased long ago – till then sleeping safely in their drawers and safes – and pulled it out to sell.

Likewise, consumers are coming into stores to liquidate unwanted jewellery: they would rather have cash. Jewellery shops are bringing in crowds with signs offering to purchase gold and platinum at favourable prices, and scenes similar to our recent experience are taking place in cities around Japan. Operators outside of the precious metals industry are also getting into the business of purchasing consumer jewellery. Mobile telephone dealerships and ticket agencies have started aggressively seeking this business.

Japan is in the midst of a countrywide jewellery scrap boom. The jewellery purchased is recycled into bullion, which is resold to jewellery makers. As a result, the demand for new metal in the jewellery market has declined dramatically since the latter half of last year. In fact, Japan is unable to consume on its own all of the used jewellery scrap – much of it makes its way to the Hong Kong market.

They rushed to the bullion sales counter on the third floor… couples, siblings, families… ranging in age from 20 or so to well over 70… carrying bags and backpacks that looked to be heavy. Inside those bags were gold bullion and coins, platinum bullion and coins, precious metal jewellery and precious metal handicrafts. All were now offered for sale.

Alongside the sales boom of physical metal, both bullion and jewellery, there has been a rapid increase in the number of people joining our ‘Gold Accumulation Plan’ (GAP) and ‘Platinum Accumulation Plan’ (PAP) programmes, as well as our internet-based savings vehicle, the ‘G&P Planner’ (GP).These programmes were developed and launched in Japan in 1982. During the four-month period between December of last year and March of this, we recorded approximately 30,000 new memberships.

Under these accounts, customers enter into a contract in which a set amount of money is withdrawn from their bank account each month for dollar-cost averaging into the metal of their choice, which accrues in their account. They are free at any time to sell all or part of their balance, withdraw it in the form of bullion or exchange it for jewellery or for gold coins, and they can do so in our stores, over the phone or via the internet. Most members are in their 30s and 40s.

Even as some customers are lining up to sell the long-held physical metal, the current gold boom has also resulted in a growing number of new consumers wanting to make purchases. Our 30,000 new members translate into additional annual demand of approximately 500 kilograms of gold and 250 kilograms of platinum. In our most recent annual Japanese consumer awareness survey, the 2007 edition found that 39% of ordinary consumers who found gold to be an attractive investment had taken its global aspect into consideration: gold ‘has value anywhere in the world.’ Another 20% were attracted by the transparency of its prices – the fact that it is ‘traded at a fair price around the world.’

However, given the elevated prices, perhaps the surprising figure is the 19% who were attracted by the ‘potential for price gains.’ In 2003, only 9% agreed with that statement, so the figure has approximately doubled in the last five years. Expectations of higher prices among Japanese consumers have – to some extent – encouraged new participation in the gold investment market.

Our survey finds that approximately 8% of consumers are interested in gold, with in the region of 1% having actually purchased it in some form. Traditionally, purchasers of gold in Japan have been the wealthy and people in their 50s and 60s, who generally hold anywhere from several kilograms to several dozen kilograms as a long-term asset. However, a growing number of consumers today are purchasing gold in the same fashion as any other investment asset – equities, bonds, foreign exchange or real estate.

Nor is it just the wealthy or the older generations who are in the market today – we are seeing a growing number of housewives and people in their 20s considering gold investments. For these investors, a bulk purchase of several kilograms of gold bullion is probably not appropriate. It is usually better for beginning investors to use a system like GAP, which can be started for as little as 3,000 yen per month, or over the internet for as little as 1,000 yen. Given the growing uncertainty in local and world economies, Japan’s gold investment market may well expand, as consumers come to see gold as another means of diversifying and protecting their assets.

In 2007, our estimate for Japanese gold demand was 239 tonnes. For investment, 23 tonnes of bars hoarded domestically were sold on the market, representing the second year in a row in which sales volumes were higher than those for purchases. The repurchased bars and the bullion recovered from jewellery scrap was exported, bringing the total to 106.7 tons in 2006, with 2007 coming in at another relatively high figure of 97 tonnes. One thing that sets the Japanese gold market apart is the high volume of industrial demand from the electrical, electronic and dental materials sectors. The recent upswing in the world economy triggered an increase in gold demand from these sectors, from approximately 100 tonnes in 2002 to roughly 150 tonnes last year and the year before, and has been one of the primary factors supporting gold demand in Japan.

Depending on price trends, the consumers who are currently taking profits on their bullion holdings are the potential purchasers of gold in the future. They can be expected to join an increasing number of new consumers who are just starting to invest in gold, along with continued strong demand from the industrial sector to produce a steady, gradual increase in Japan’s demand for the metal – a trend that we will continue to monitor closely. 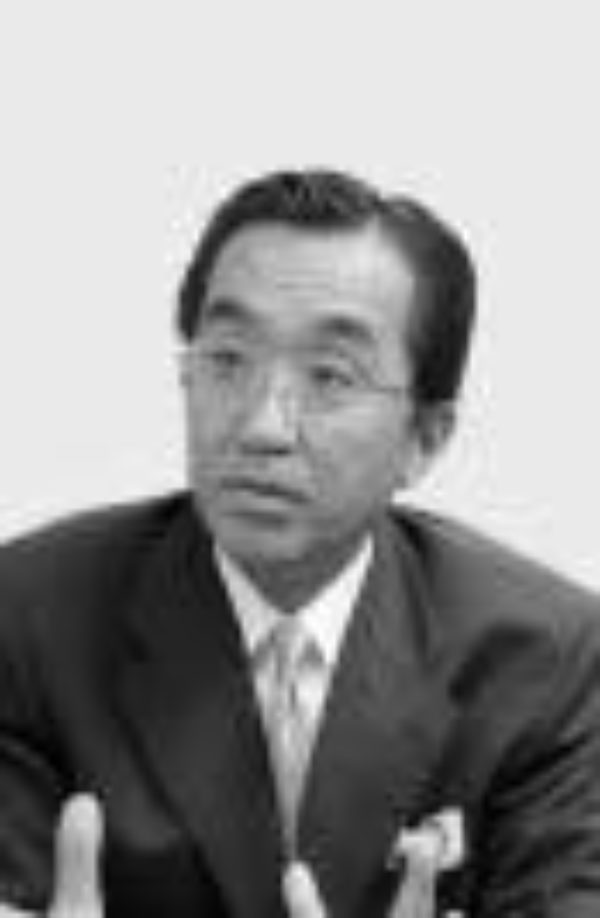 Hideya Okamoto is president of Tanaka Kikinzoku Kogyo K.K. and chairman of Tanaka Kikinzoku Jewellery K.K. He has been with the company, in positions of increasing responsibility, since 1987. Prior to joining Tanaka, he was with Mitsukoshi, LTD. He graduated from Kelo University in 1980 with a bachelor of economics.