Over the past year there has been a surge of interest in commodities, with flows into US and European listed commodity exchange traded funds rising 2.5 times to $56bn by the end of June 2008.The introduction of exchange traded commodity securities has permanently changed the nature of commodities investing, democratizing a key asset class by simplifying access to markets that were previously the preserve of a relatively small club of sophisticated institutional investors. 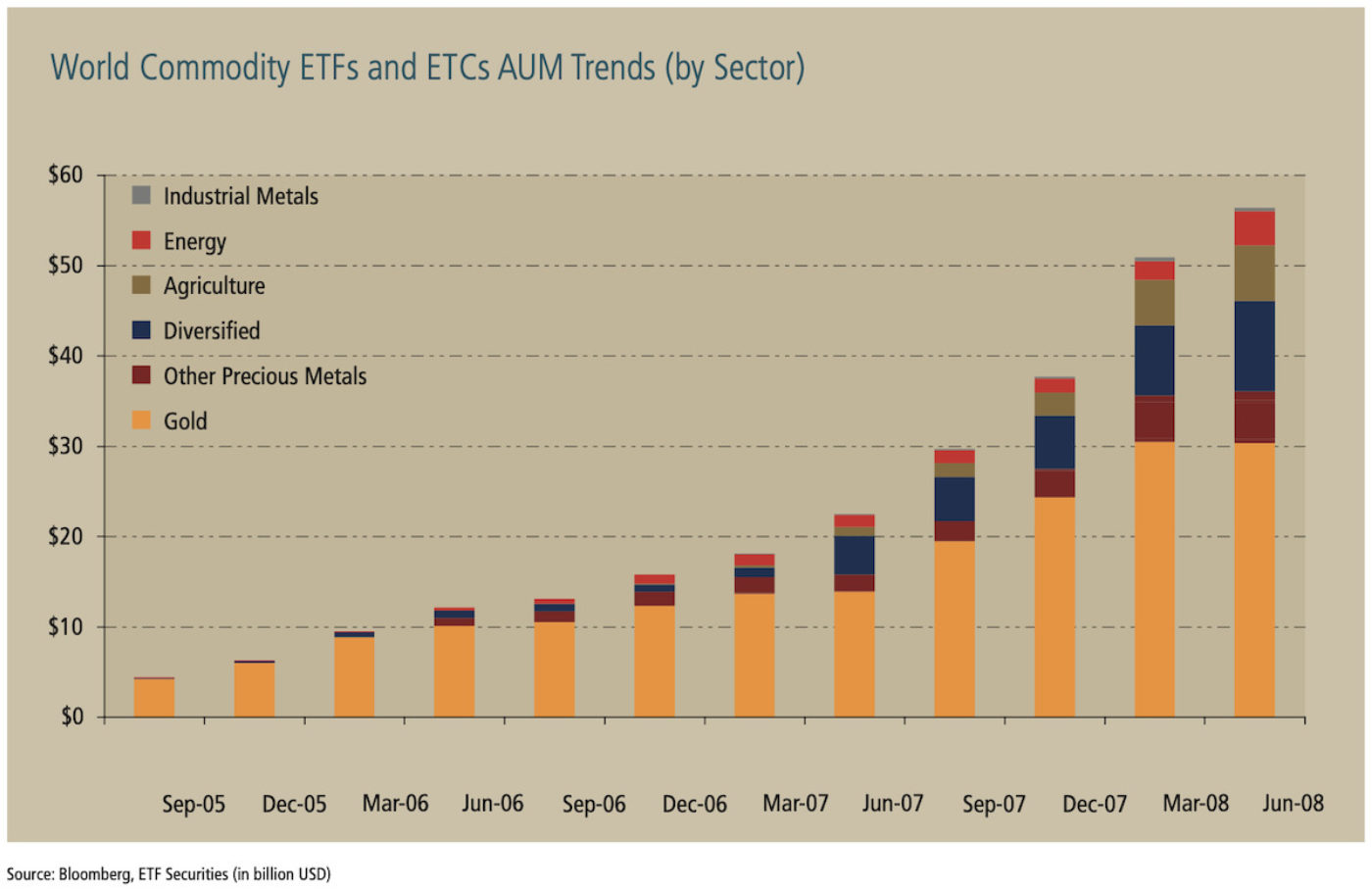 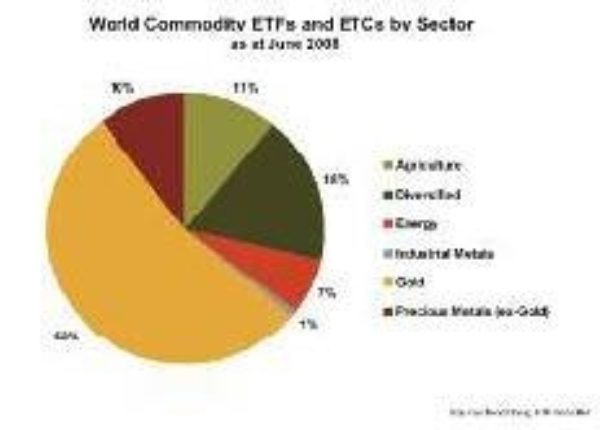 There are a variety of reasons for the rise in investor interest in gaining direct access to commodity returns. Foremost has been a dramatic shift in the supply-demand dynamics affecting the long-term price outlook for a wide-range of commodities. The emergence of China and other large emerging markets as major importers of commodities as their economies have gained critical mass over the past few years has led to a large structural upward shift in global commodities demand. On top of this, agricultural commodities have seen an additional large new source of demand from the heavily subsidized and rapidly growing biofuels industry.

On the other side of the equation, the supply of many commodities has been constrained by years of under- investment in exploration, infrastructure, and new supporting technology. Although investment is now being increased, in many cases it will beyears before this investment translates into substantial new supply. The marginal cost of production of many commodities has also been increasing as firms are forced to dig deeper and move further afield to source new supply and the cost of key inputs such as land, labour, transport and machinery has been rising at an extremely rapid pace. This has put a much higher floor under prices than only a few years ago.

An additional long-term factor that is only now starting to play an important role in the commodities markets is the growing interest of institutional investors in gaining long-term exposure to commodities as an asset class. A key appeal of commodities is their low to negative correlation with most other major asset classes. This has meant that adding commodities to a portfolio made up of equities and bonds has often improved its long-term risk-reward profile. While some large endowments and pension funds have been doing this for a number of years, the recent creation of stock market listed securities that track physical commodity returns (such as ETCs) has opened this long- recognized method of improving long-term risk adjusted returns to a much broader range of investors. 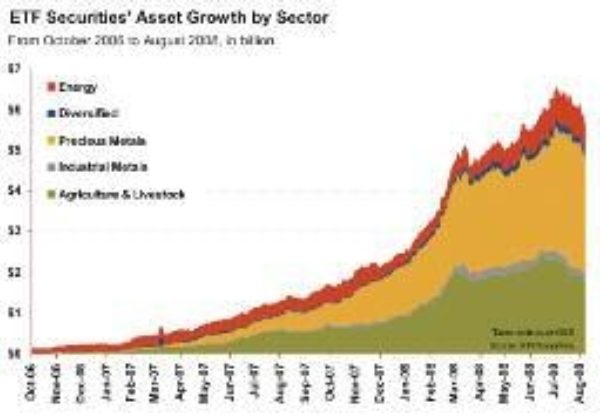 As illustrated in the chart above, the bulk of assets in exchange traded commodity securities is in precious metals, with the largest portion in gold (53% of total). Broad diversified commodity baskets make up the second largest holding, accounting for 18% of total assets under management. This is closely followed by agriculture at 11%, other precious metals at 10% and energy at 7%. Industrial metals and livestock make up a relatively small share, each accounting for around 1% of total assets under management.

In terms of asset growth, in the first half of the year agriculture saw the fastest increase, up 142% during the period (assets in livestock rose nearly 20 times to around $600mn), followed by energy up 136% and diversified commodity baskets up 70%. Although assets in precious metals grew at a slower 30% rate, because of their large size, they accounted for nearly half of the growth in total assets in US and European commodity ETFs/ETCs during the period.

There are three main stock exchange listed vehicles for gaining direct exposure to commodity returns - Exchange Traded Funds (ETFs), Exchange Traded Commodities (ETCs) and Exchange Traded Notes (ETNs). In Europe, ETCs have been by far the most popular exchange traded method of gaining direct exposure to commodities, accounting for more than 70% of total assets outstanding. Over the past year, assets under management in ETCs have risen by nearly 2.5 times to around $10bn. Over the same period, assets under management in commodity ETFs have increased to around $4bn from under $1bn. ETNs are becoming more common in the US but are the same as Europe’s structured products and have played a negligible role in European commodities investing.

The first ETC was a Gold ETC listed in 2003 on the Australian Securities Exchange and on the London Stock Exchange in 2004 by the founders of ETF Securities. Since then a full platform of ETCs has been listed on exchanges across Europe giving a wide spectrum of investors direct access to long, short and leveraged positions in commodities ranging from livestock to platinum. Assets in ETF Securities ETCs (including Gold Bullion Securities ETCs) now stand around $9bn,giving it approximately a 75% share of the European and a 20% share of the combined US and European commodity exchange traded securities markets. Its flow data therefore provides interesting insights into developments in the burgeoning exchange traded commodity arena. 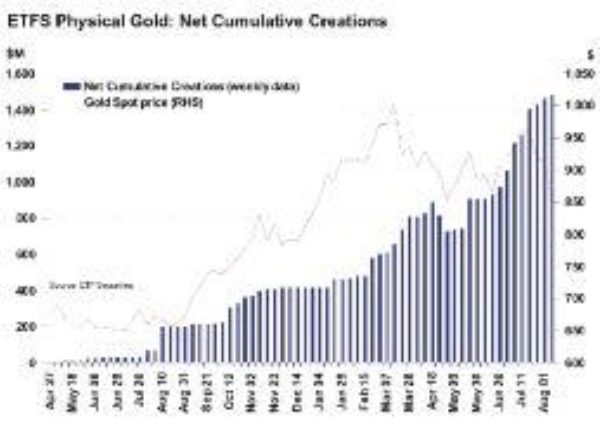 Similar to the trend seen in the broader US and European ETF/ETC markets, flows have been particularly concentrated in precious metals, with ETFS Physical Gold (an ETC fully backed by allocated gold in a vault) receiving $1.5bn of flows over the past twelve months, accounting for 25% of total assets under management and nearly 40% of inflows during the period. ETFS Physical Platinum, a platinum ETC fully backed by physical metal bars in a vault, has seen total net inflows of around $420 mn over the past year while ETFS Physical Silver and ETFS Physical Palladium have seen inflows of around $110mn and $100mn respectively.

Reflecting investors’ growing interest in gaining broad access to precious metals returns, ETFS Physical PM basket which tracks the returns of a basket of gold, silver, platinum and palladium, has seen inflows of nearly $100mn over the past twelve months.

The extremely rapid growth of flows into the physically backed precious metals ETCs partly reflects investors’ growing demand for safe haven assets as financial sector risk, concerns about the long-term outlook for the US dollar and inflation fears have risen. It also likely reflects long-term strategic investors increasing positions as insurance against future financial shocks and to diversify portfolio risk. The fact that inflows into ETFS Physical Gold continued to increase even during periods when the gold price was falling, is a strong indication that strategic investors are using these ETCs to implement longer-term investment strategies (see chart to the right).

Another interesting theme that has emerged in recent months has been the growing interest in short and leveraged ETCs. Trading in these ETCs has increased rapidly, with one transaction as large as $80mn in a leveraged ETC taking place in one day. Since listing at the end of February, ETFS Short Crude Oil (which moves inversely to the oil price) has seen nearly $300 million of inflows, surpassing flows into all of ETF Securities’ ETCs except for ETFS Physical Gold. Weekly average trading volumes surged in August, rising to over $600mn, accounting for over one-third of all ETF and ETC trading on the London Stock Exchange (including ETFs tracking the heavily owned S&P 500 and FTSE 100 indexes). There has also been strong investor interest in ETFS Leveraged Gold, with inflows of over $100mn since listing in early March. ETFS Leveraged Silver has seen $20mn of flows and ETFS Short Gold has seen nearly $15mn of inflows. 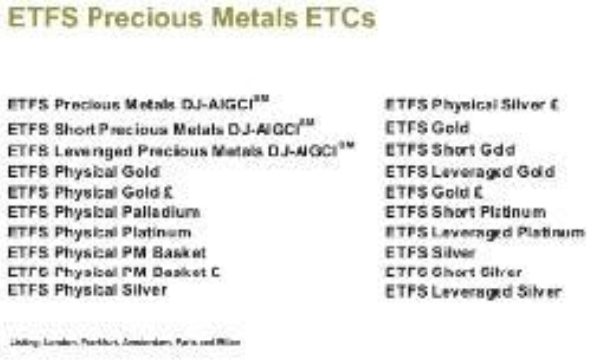 The creation of commodity exchange traded securities marks a watershed in commodities investing. By providing an easy, transparent and cost-effective method for investors to access commodities returns, exchange traded commodities have opened a new asset class to a wide range of investors. Innovations now permit investors to implement a variety of investment strategies that previously were accessible only to a relatively small group of specialized investors. Continued strong inflows into a number of ETCs, even during periods of falling prices, highlights the longer-term strategic nature of a large portion of these flows. More recently, the surge of flows and trading volumes in short and leveraged ETCs indicates that investors are starting to use these products not just for longer-term strategic purposes but are also using them to hedge risk, pair trade and take shorter-term tactical views. Continuing innovations in the commodities investment arena together with growing investor knowledge of these markets indicates that commodities investing will continue to rapidly move into the mainstream. n

Nicholas Brooks is responsible for research and investment strategy for the ETF Securities group of companies. Prior to joining ETF Securities,Nicholas was senior economist and market strategist on Henderson Global Investors global economics, strategy and asset allocation team based in London. Before that he worked at Deutsche Bank where he was senior economist on the bank’s top ranked Global Markets team. He started his career at Citibank in NewYork. Nicholas has a B.A. from Brown University,M.A. from Columbia University and an MSc in Economics (with Distinction) from the University of London.