After the Goldrush: What Drives Investor Demand Today?

Gold’s quickstep with $1000 in 2008 was not a chance meeting. The first steps in this dance were taken several years ago, with the introduction of new avenues to gain exposure like ETFs, bringing the metal back into vogue with investors. Last year, gold not only breached the all-time nominal high set in January 1980, but also set a record annual average high. Investment demand is still taking the lead in 2009. This article examines some of the tunes to which gold investment dances, and which is most likely to put on the moves in 2009.

During March 2008, not only were exogenous factors neatly aligned, but the metal’s own fundamentals had become favourable. Mine supply has disappointed for a number of years, despite prices reaching record highs. The European central banks’ Gold Agreement has been a successful tool for the European banks to dispose of gold holdings without causing market instability yet providing market confidence. Indeed, subdued sales in recent months added to the bullish sentiment. Despite the higher prices, growth in recycling has not been sufficient to offset the decline elsewhere. Gold scrap accounts for about 30% of total supply, leaving most of the supply inelastic. Jewellery consumption still makes up the bulk of the end use of gold and tends to provide a floor to prices: when prices encounter a downward trajectory, physical buying returns to the market.

One of the key dynamics that has been crucial in the change of fortune for gold has been the swing in producer strategy from hedging to de-hedging. The additional ‘demand’ created through restructuring and position buybacks has been significant. The global hedge-book peaked at over 3000 tonnes at the start of the decade; the latest data from the Fortis/VM Group report estimates the global hedge book fell to 512 tonnes as at Q3 08 – less than a fifth of that peak. Investment demand has been the one flow that has shown tremendous growth, partly due to the new channels of investment that make holding gold easier and partly due to the external environment that has provided investors with a plethora of motives to hold gold.

Investors in search of a safe haven have rapidly increased their exposure towards gold. Fears of a recession, uncertainties regarding the credit markets, Fed rate cuts, a falling dollar, as well as inflationary concerns are some of the factors that helped gold to conquer $1000/oz and cause shortages of physical gold worldwide.

Looking at four factors – dollar hedge, inflation hedge, recession hedge and equity market hedge – from a simple return point of view shows that some of them are purely theoretical, not all are equally important, and indeed those that drive prices sometimes switch places in the driving seat. 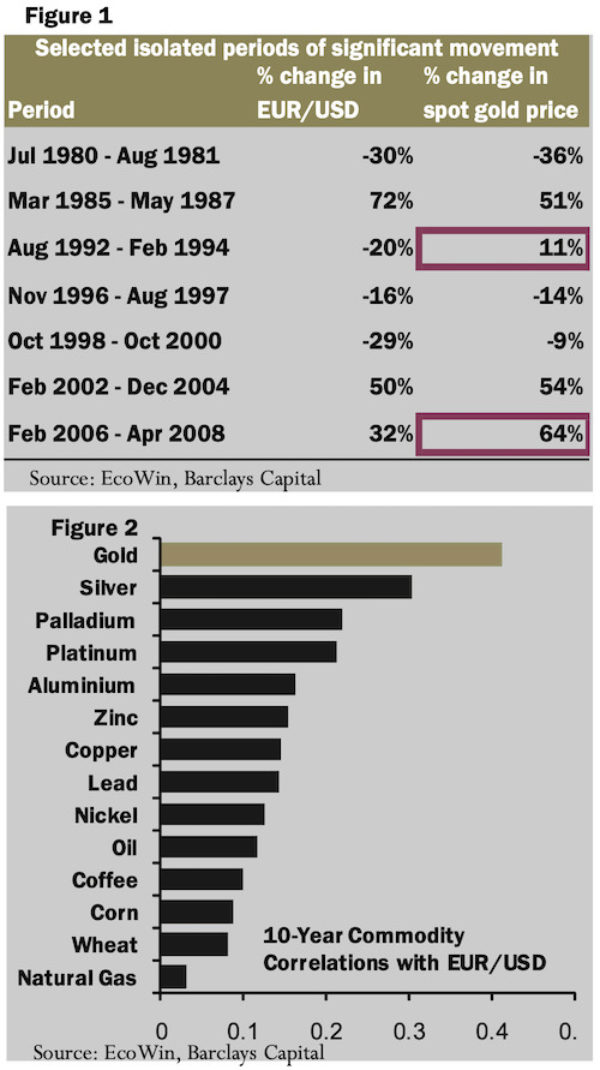 Most commodities are priced in US dollars, so it is not surprising that a negative relationship exists between commodity prices and the value of the dollar. Gold’s legacy as a monetary asset, with key consumption being outside of the US, helps it to rank top in terms of the strength of its relationship with the dollar over the past ten years.

To the casual observer, a weakening dollar would certainly appear to be broadly supportive of an uptrend in gold prices, but the converse does not necessarily hold true. Taking selected isolated periods of significant change in the EUR/USD shows during periods of dollar weakness (Figure 1), gold prices do tend to benefit. For example, between February 2006 and April 2008, the EUR strengthened by 32% against the USD and gold prices rose 64%. Gold prices rose more than the dollar weakened. As the table shows, this is not always the case: gold prices do not always appreciate by a set magnitude of dollar decline. Conversely, between October 1998 and October 2000, the EUR fell 29% against the USD, while gold prices fell 9%. Notably between August 1992 and February 1994 where the EUR weakened against the USD by 20%, gold prices still rose some 11%. Although a weakening dollar is supportive of higher gold prices, it is not essential; furthermore, a strong dollar does not necessarily prevent gold prices from appreciating. It is a strong relationship that is often traded but not one that will unquestionably cause an equal and opposite reaction. The correlation between the USD and gold prices is currently firmly in positive territory, but history shows this relationship tends to weaken during periods of dollar strength, and the relationship becomes stronger during periods of dollar weakness.

Back in March 2008, when gold prices breached the $1000 level, the USD had hit record lows against most major currencies. In turn, our expectation for the USD to weaken against the EUR on a 12-month basis bodes well for gold. 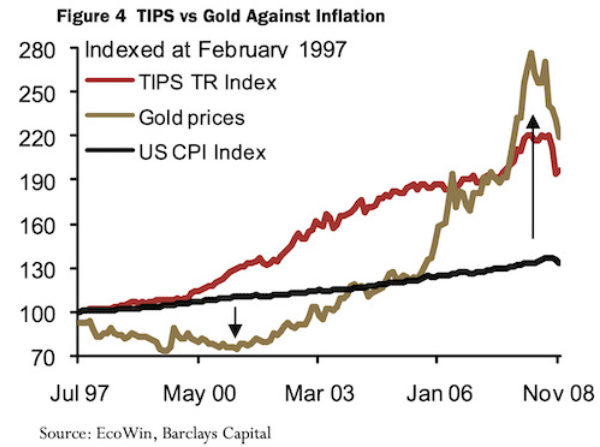 Gold is sometimes bought as a hedge against inflation, but it is far from a perfect or dynamic hedge and may need to be held for longer periods to be effective. As illustrated in Figure 3, inflation and gold prices have broadly moved together but gold has been far more volatile: while US CPI has moved between zero and 16% since 1971, gold prices have fluctuated between minus 50% and 200%.

In the past ten years, since the launch of the TIPS (Treasury Inflation Protected Securities) data, TIPS offer a better inflation hedge because they have provided a continuous positive return. Gold, on the other hand, underperformed inflation for the first six years, but then overshot the US CPI index over the last four years (Figure 4). It follows that inflation hedging is not the driving factor in gold investment demand.

The impact of recessions on gold demand also varies. Jewellery demand is not just a function of income, it is also dependent on other factors such as price levels and price volatility. Industrial demand is too small a proportion of overall demand to function as a major depressant. Investment buying, whether through small bars and coins or more recently through ETFs, has generally risen and, in turn distorted overall demand.

Although periods of rising interest rates have yielded far better returns for commodity index investors than periods characterised by monetary policy easing, gold’s performance appears to be little affected from fluctuations in economic growth. There is not a strong consistent pattern of gold price behaviour during recessionary periods (see Figure 5). 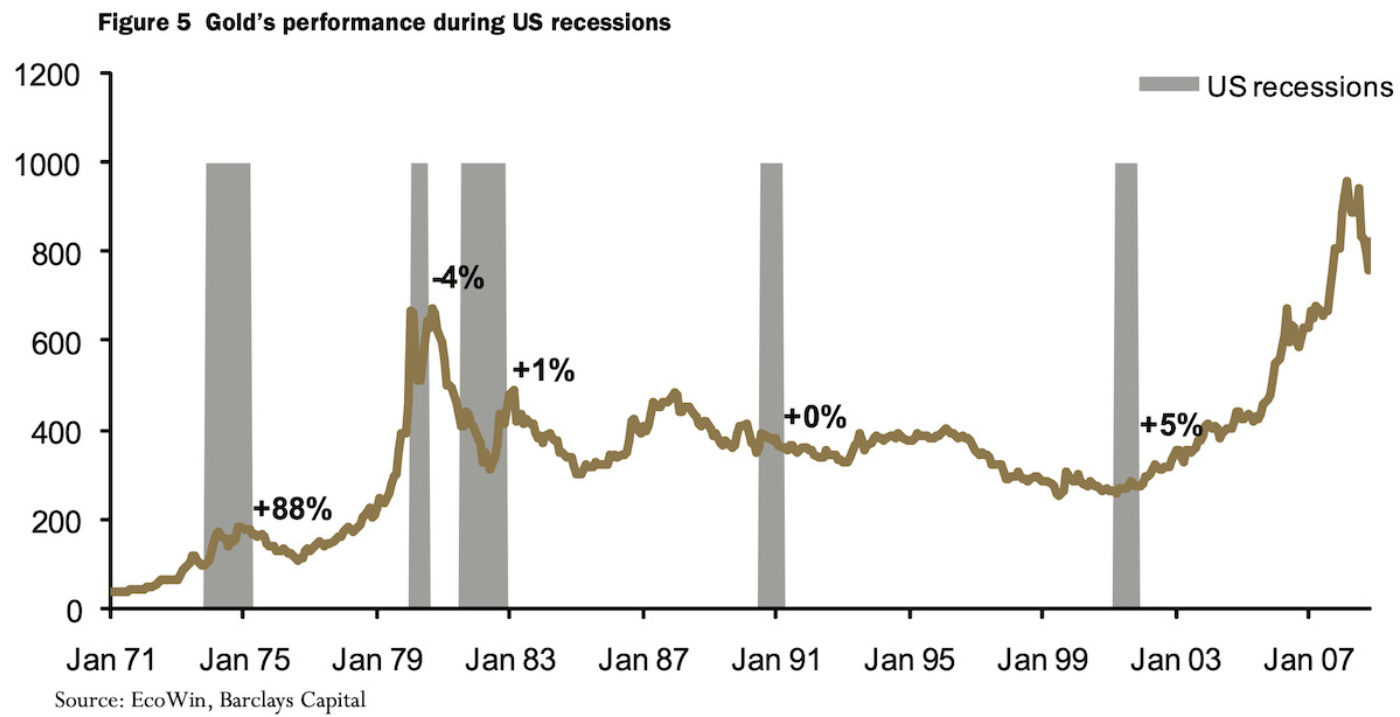 Gold prices tend to follow a different trajectory to equity and bond markets. Gold prices and equity markets can move in opposite directions as investors switch asset classes, but they can also move together as gold returns are liquidated to meet margin calls elsewhere or amid broad risk reduction. Notably, since the start of the subprime crisis the two diverged, but during October 2008 they suffered similarly from risk reduction. In the past, gold has shown a low correlation with the equity markets. For example, during the 1987 stock market crash when the S&P 500 fell over 20% on Black Monday, gold prices closed 3% firmer and were fairly stable in the proceeding weeks. Similarly, during the 1998 emerging markets/LTCM crisis, gold prices were relatively steady, while equity market volatility increased. On neither occasion were gold prices driven substantially higher. In recent months safe-haven buying seems to have come into play and is buoying prices amid a deteriorating macro-economic outlook and rising geopolitical tensions.

As a safe haven, gold’s job is not necessarily to provide capital appreciation but to provide less volatility and add stability to a portfolio. Gold volatility remains low compared to other asset classes and holds its attraction for equity hedging investors.

Gold’s dual role as a commodity and a monetary asset has meant prices did not tumble as much as other assets or commodities toward the end of last year. Nevertheless, some market participants were disappointed that gold prices did not breach the $1000 level for a second time last year. After all, if gold prices do not thrive in an environment of continual downward revisions to GDP growth forecasts, equity markets spiralling to multi-year lows, interest rates slashed to multi-decade lows, new orders falling to their lowest ever level, plummeting auto sales, tumbling house prices and add to that cocktail renewed geopolitical tensions, what else is needed to boost safe-haven buying?

As we have discussed above, recessionary periods, low interest rates and poor equity market performance do not conclusively result in higher gold performance. However, if many of the key factors are favourably aligned and, most importantly, investor sentiment is positive, gold prices tend to gain upward traction.

If we step back to March 2008, when gold prices hit the all-time nominal high of$1000/oz, gold found itself in a very price- positive environment. Three key drivers of gold were indeed neatly aligned: first, the dollar had reached record lows against most major currencies; second, oil prices were on an uptrend; and, in turn, third, combined with higher agricultural prices, inflation expectations were ripe, as well as equity market underperformance and tight credit markets boosting safe-haven buying. Now the latter has indeed worsened, but the three external drivers have become less supportive with the USD bouncing back, oil prices falling and inflation concerns turning to deflation concerns. Overall, the drivers are not currently stacked as positively as it would first appear.

In the near term, prices are likely to remain torn between two camps. On the one hand, a sharp pickup in safe-haven buying will support prices, but on the other, the need to liquidate positions to meet margin calls elsewhere, combined with periods of USD strength, will cap gold’s upside potential. Physical investment demand in gold had an exceptional year, with total gold holdings across the 15 major ETFs closing 2008 at a record 1195 tonnes, while retail sales of coins and small bars have also soared. In our view, three key factors are set to evolve favourably for the metal: 1) we expect the USD to weaken against the EUR on a 12-month basis; 2) we expect oil prices to go through an initially shallow recovery this year, gaining momentum as the year progresses; and3) an inflationary environment is expected to start to build towards the end of the year. We expect these factors to support an uptrend in prices later in the year. Despite a supportive fundamental base, the inevitable slowdown in producer de- hedging means investor sentiment remains key for the outlook of gold prices. Where prices travel from here depends on whether investors keep turning to gold. 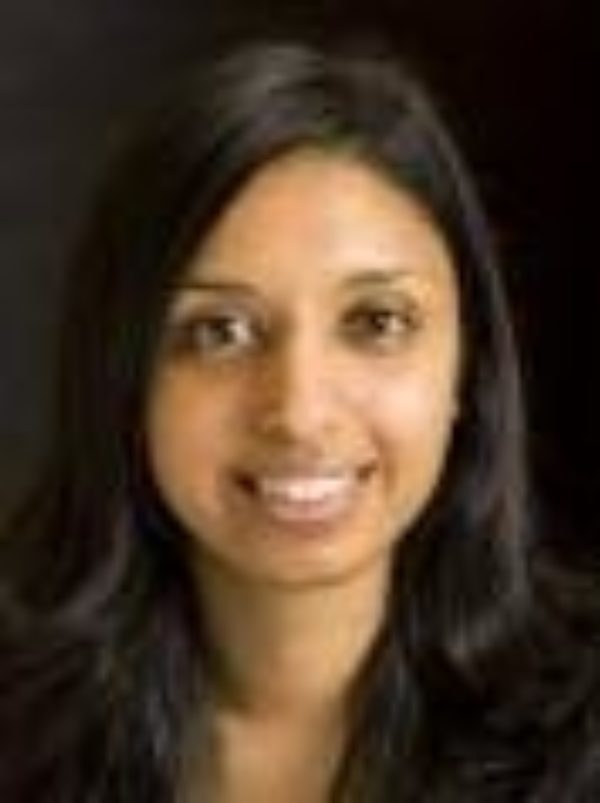