Gold Jewellery Consumption: The Impact of the Economic Crisis

Reviews of gold jewellery consumption typically focus on the price sensitive countries of the developing world, in particular India, because of their marked fluctuations in demand. The industrialised world’s more stable consumption, however, is still worthy of analysis.

Firstly, it remains sizeable, at around 600 tonnes last year, and has the scope for massive change. As illustrated in the accompanying chart, this grouping’s consumption has roughly halved since its early 1990s peak. Secondly, its relatively price insensitive nature means it has the active ability, at least in theory, to boost or undermine the gold price, in contrast to the developing world’s consumption, which may well just passively inflate or deflate in response to price moves caused by other factors.

This loss of almost 600 tonnes of demand, as implied above, had three main causes, namely background structural changes, higher and more volatile gold prices, and recent macro-economic problems. The explanation and importance of each is assessed below.

A historical review of consumption in the industrialised world shows a downward slide since 1992 that has been remarkably smooth. The chief reason for this seemingly relentless decline is that the bulk of losses within this period are attributable to secular changes. One such change is market share loss by all forms of jewellery to other areas of discretionary spending, such as consumer electronics or short break holidays.

A second is that consumers have been choosing to devote an ever greater percentage of expenditure when buying jewellery to elements other than precious metals. These elements can be physical, such as diamonds (which explains the norm in most markets for the share attributable to gemset over plain pieces to rise inexorably), or intangible, such as the perceived value of a branded item. One manner in which this has occurred is the long term slip in average weights as lighter pieces have higher making charges on a per gramme basis. There has also been market share loss by gold to other precious metals in several markets.

It is important to note here that this does not imply the value of gold jewellery consumption has been falling. A simple multiplication of the fine weight by the average price shows a strong uptrend in value this decade and that is before we take into account inflating margins (branded, lighter and gemset pieces invariably carry a higher markup than plain, unbranded and heavy items). 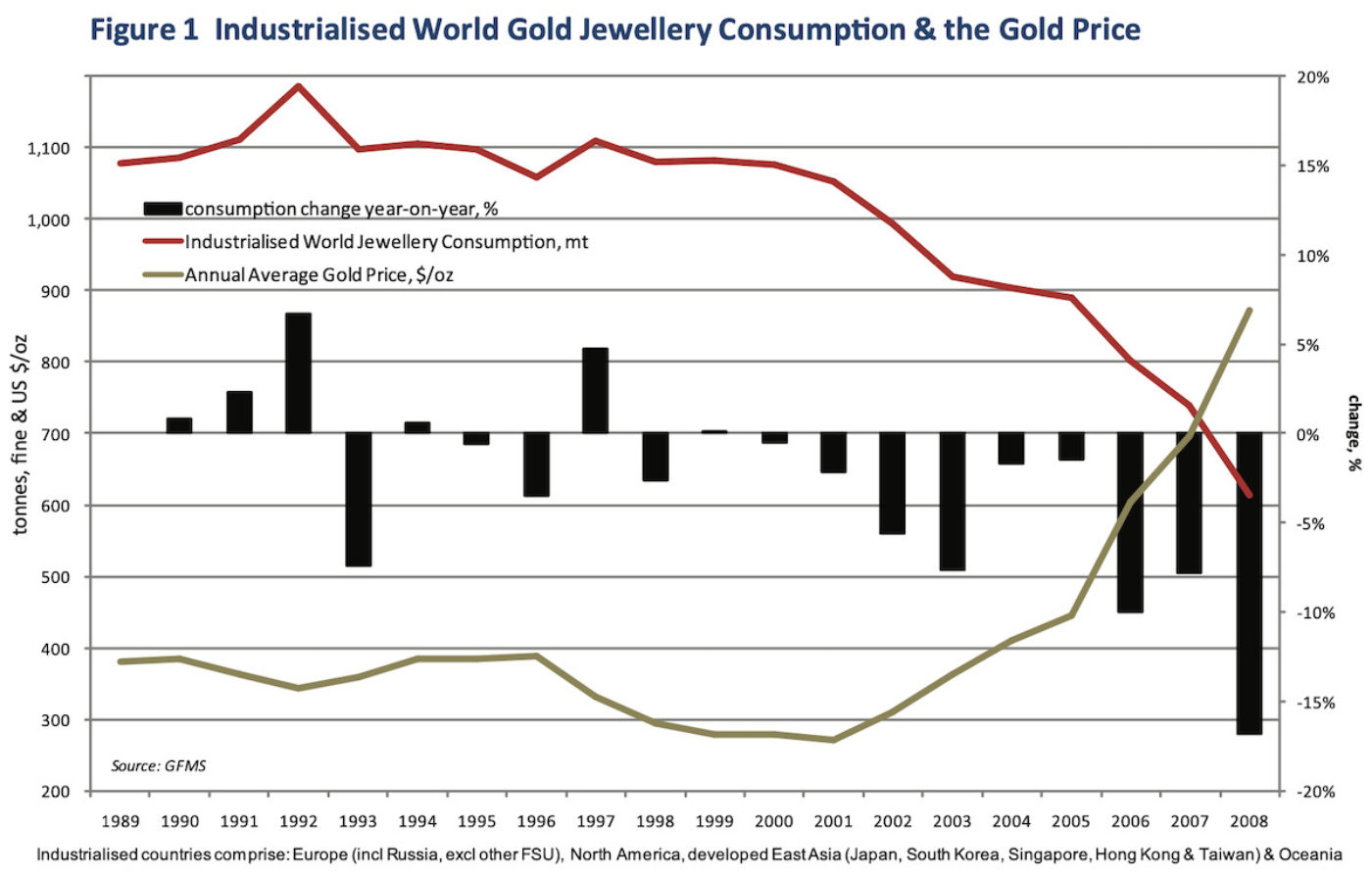 Structural changes, however, cannot explain the acceleration in the pace of decline from 2006 onwards. Instead, it seems fair to blame much of this acceleration on the gold price rally. It might be thought that this would primarily hit consumption through consumers’ budget constraints. However, of seemingly far greater importance is the trade’s management of margins.

In theory, the rise in the gold price could have been accommodated by a drop in the markup over the fine gold content that the consumer ends up paying but, instead, far more attention seems to have been paid to shaving the weight of gold to keep pieces below key price points, especially in the United States. Such methods have included swopping from solid to hollow items or the adoption of electro-forming (a process geared to producing light weight articles). There has also been an intensification of structural trends, such as incorporating more non-metal elements (a pendant on a leather cord rather than a gold chain for example) or adding small, inexpensive diamonds to boost apparent value. 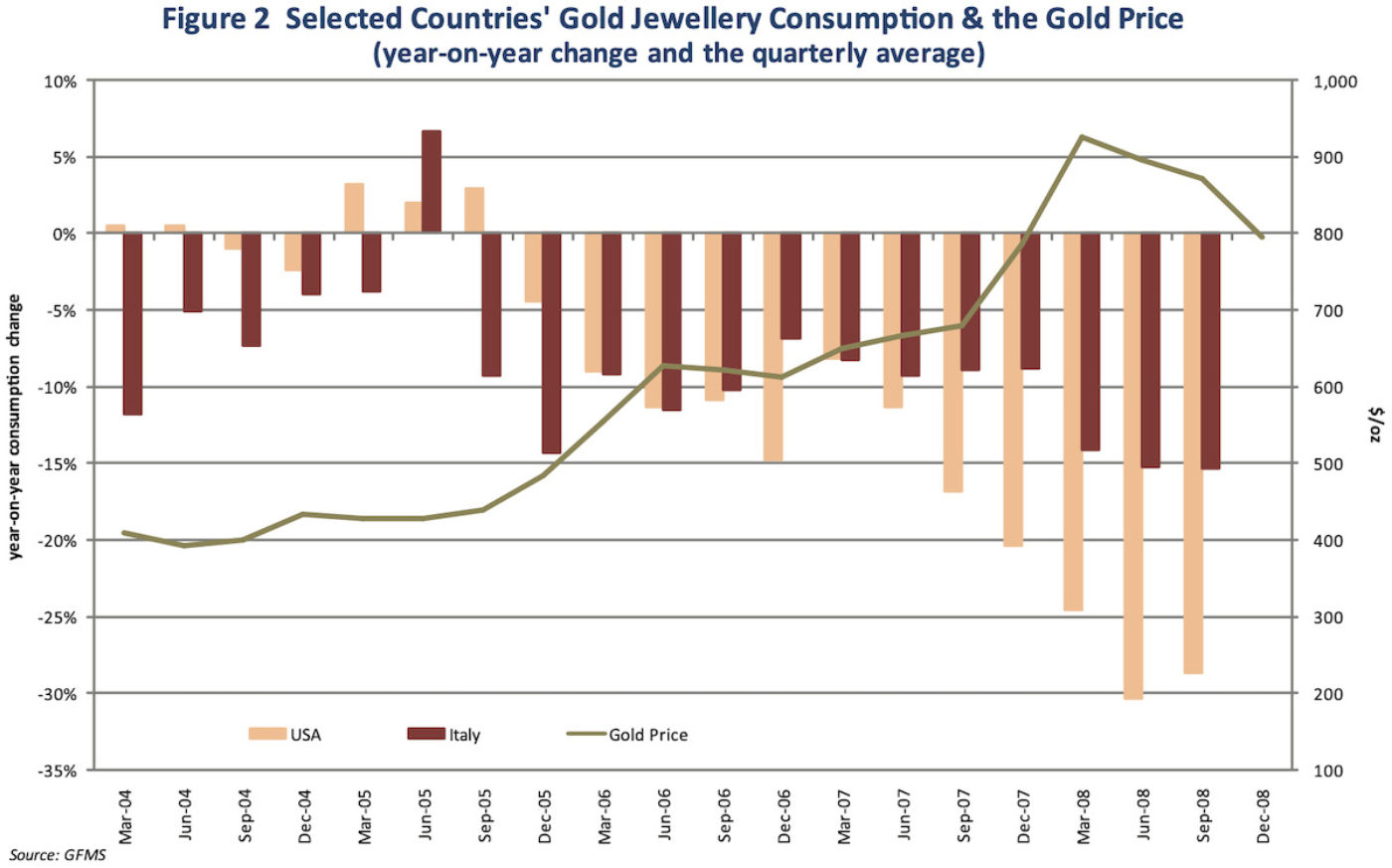 The Financial and Economic Crisis

It is of course quite reasonable to describe the gold rally as partly the result of recent financial troubles. Nonetheless, it is important to see if there are direct links between falling jewellery consumption and the abrupt slowdown in GDP growth in the industrialised world that began last year. A review of annual figures is of little help as the acceleration in the pace of consumption’s decline in 2008 could merely be a function of record gold prices.

To isolate the gold price, we therefore need to look at a more detailed time series. If we begin with quarterly figures, there has been a reasonably clear acceleration in the pace of consumption declines over the last year or so and, while steeper losses in late 2007/early 2008 coincided with rapid price gains, those in the second and third quarters were in tandem with prices easing; a development that obviously implies other factors at work. (At the time of writing, our fourth quarter figures have yet to be finalised but these are likely to show slightly greater losses again when published by the WGC in mid-February’s Gold Demand Trends.)

The closer analysis of other factors’ influence arguably requires monthly information. One useful data set here are the figures for US gold jewellery imports. As shown in the chart, there was a marked jump in the speed of the decline in imports from mid-2007. Up until March 2008, these ever steeper losses closely mirrored the gold rally but, after that, there were periods of both easing prices and larger consumption losses. Time lags may partly be the cause but changes in consumer spending or confidence, as graphed, do appear to have enjoyed greater similarity to import behaviour.

The fact that the pace of consumption losses has sped up is partly due to an intensification of the process of minimising gold use. One such area is a move to lower carats. Before 2008, shifts to lower carats had been comparatively limited, especially in those markets dominated by one standard, say Italy and 18-carat. There was only one obvious exception here, Japan, where there had already been a swing from 18 to 10-carat.More recently however, there has been a more pronounced shift to lower carats, particularly in those countries with a mixed carat structure, for example the United States. There, and in other markets such as Australia, this has taken on a more radical form in the growth of ‘gold-filled’ pieces, jewellery where carat gold is clad to a core of another metal, typically silver, to give an effective carat for the whole item of only three or four.

Another factor that we have seen is greater market share loss by gold to other metals. In Italy for example, there was a swing to the non-precious, such as brass or stone-set steel, while the US market saw a shift from gold to high end silver jewellery. The latter’s resultant focus on value rather than weight helps explain why silver’s losses globally to other forms of jewellery, such as steel, may well have outweighed the gains from other consumers’ migration from gold. As a result, silver also suffered accelerating consumption losses last year in the industrialised world, although the scale of the drop remained far smaller than that inflicted on gold. Gold benefited through substitution from platinum but this tended to be confined to the first half of last year, when gold’s discount was over$1,000/oz, and was centred on the more price sensitive Chinese market.

As for the impact of the crisis on the jewellery industry, there is clear evidence of manufacturers facing great problems in their ability to borrow gold, whether securing bullion supplies if counter-party risk had been judged too great or paying more as true lease rates rose. The securing of credit has also been a major headache for wholesalers and retailers and one way in which this has impacted the gold market is through the occasional remelt of slow selling pieces in order to get inventory valuations below loan limits. 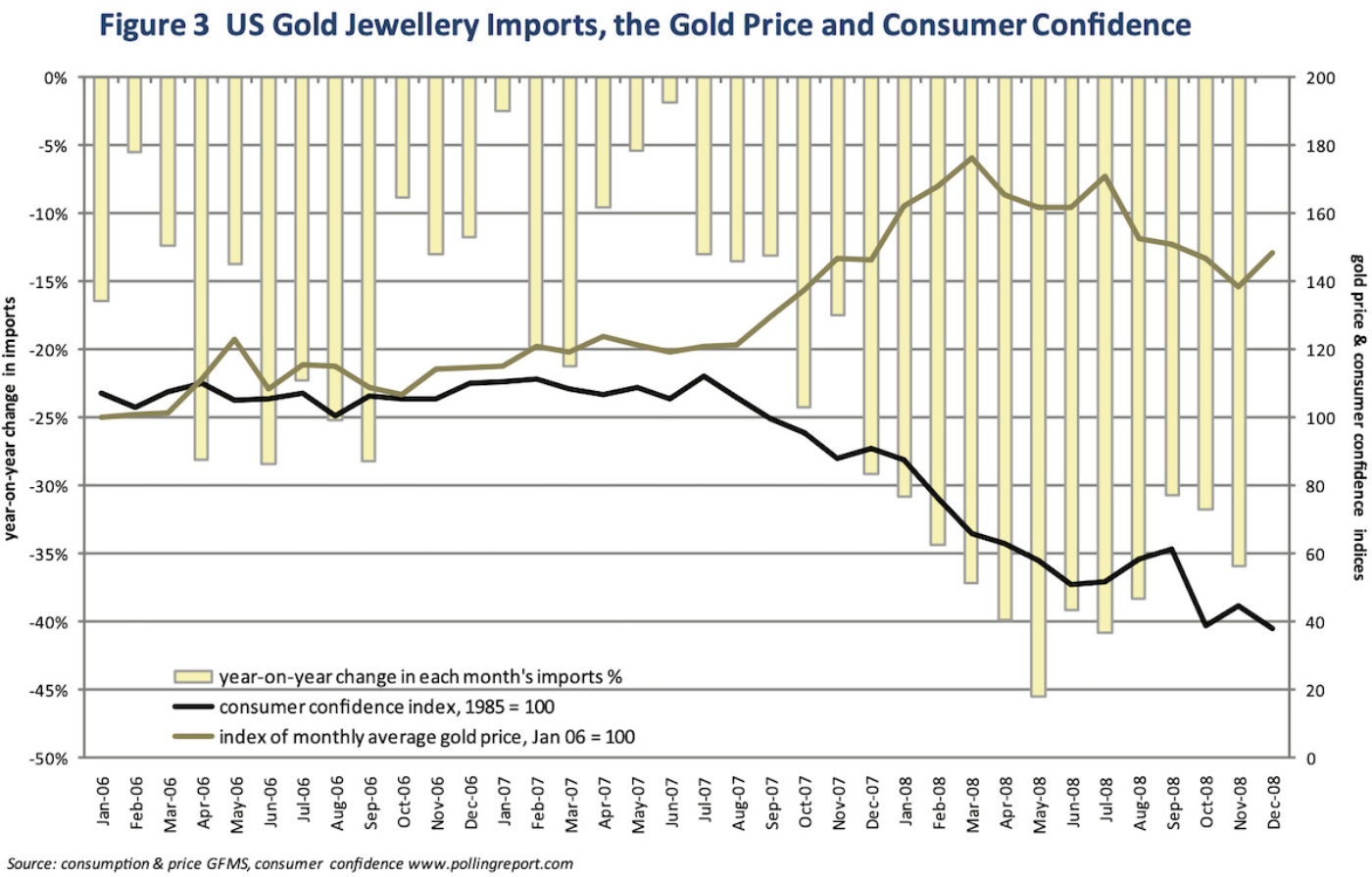 It is possible to assess the impact of both the direct consequences of macro- economic turbulence and their indirect transmission via the gold price by calculating how large industrialised world consumption might have been if we had just had structural change to contend with. This can be done in a indicative fashion by applying the average annual drop in the period 1996- 2005 of around 2% to the years from 2006 (the first year in which one could arguably begin to describe prices as “high”) to 2008. If they had fallen at that average pace, that would have left jewellery consumption in 2008 some 220 tonnes higher than our current figures. Given that macro-economic problems are yet more recent, it is probably fair to blame the bulk of these non-structural losses on the price. However, for 2008 alone a roughly equal billing for the two is perhaps a better stance, given the jump in the scale of the drop from 2007 to 2008.

Looking ahead, it is hard to see how another drop in consumption in the industrialised world can be avoided, given bleak economic prospects, possibly higher prices and the background changes whittling away at weight. The exact scale of the decline will be chiefly dependent on the first two but it is easy to envisage a scenario in which losses in 2009 are a good 50 tonnes.