How Might Gold Perform During a Period of Deflation?

It is well known that gold tends to perform well during periods of high inflation. It is less well known how gold might perform during a period of global deflation.

Pent-up Demand for Gold During the Great Depression

One way to get an idea of how gold might have performed if it had been allowed to trade freely is to look at how gold appreciated against individual countries’ parity rates as countries went off the gold standard in the 1931-34 period. As can be seen in Figure 1, the gold price surged against most currencies once they freed themselves from the fixed rate, implying substantial pent-up demand built up during the deflationary years. 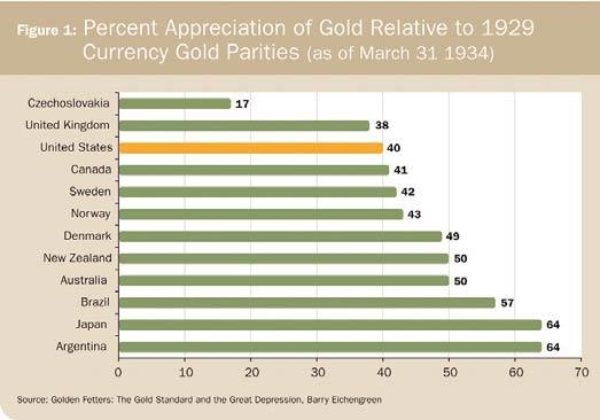 Loss of Confidence in Paper Money During Periods of Deflation

There is a clear logic to why gold demand should rise during periods of global deflation. Most periods of deflation are accompanied by sharp declines in domestic demand and systemic financial sector problems. Governments and central banks are forced to step in aggressively to offset the slowdown in private sector demand and repair the balance sheets of financial institutions. This generally leads to large injections of paper currency into the financial system and sharply higher government debt levels.

In an environment like today’s, when all major economies are facing severe recession, potential deflation, systemic financial sector crisis and the risk of currency devaluation (similar to the situation during the Great Depression), gold stands out as the main alternative to paper currencies. 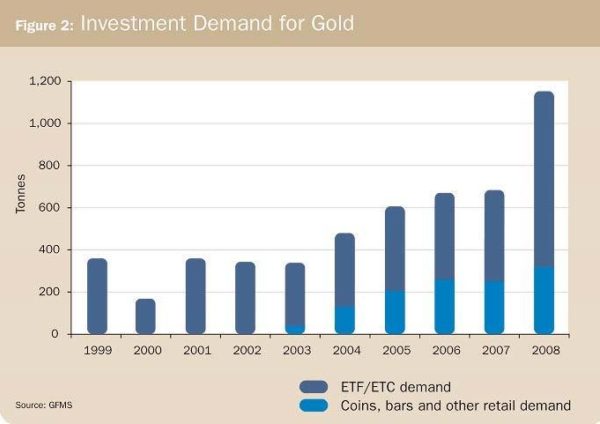 Confiscation Risk Low as No Policy Link to Gold4

During the Great Depression, when the gold price was fixed, demand for gold manifested itself in large declines in the government’s gold stocks as the public and investors (domestic and foreign) demanded gold in exchange for their dollars.

Ultimately, as gold reserves fell towards mandatory minimum levels in early 1933, Roosevelt was forced to require the surrender of all gold held by the public at a predetermined price, halt gold exports, and devalue the dollar against gold. It was either that or completely remove the link to gold.

It is important to emphasise that in the current situation, where there is no policy link to gold, there is no similar rationale for governments to confiscate gold as there is no artificial peg to gold restraining their policy options.

Under the gold standard that prevailed in the run-up to and through much of what is now known as the Great Depression, governments were forced to artificially support their currencies to maintain their parity rates, thus restricting their ability to reflate their economies through aggressive monetary stimulus. It was a classic case of the “macroeconomic trilemma”, where policy makers under an open capital account are able to control their monetary policy or their exchange rate, but not both. In fact, many economists directly blame the policy restrictions caused by rigid gold pegs for turning what might have been a modest recession into a severe global depression.

Roosevelt chose to effectively close down the public’s ability to convert into gold in order to regain control over monetary policy. Today, with no major currency pegs to gold, there are no artificial constraints on monetary policies and therefore no need for governments to confiscate gold. In fact, any direct meddling in the gold markets by governments would likely be counterproductive by increasing investor anxiety and encouraging a rush to other hard assets such as silver or other precious metals.

While there are no gold pegs to break today, this does not mean that a similar gold price dynamic will not evolve. During the Great Depression, as the pressure on governments to reflate became unbearable, pegs were released and currencies fell sharply against gold, much like water breaking through a dam (see Figure 1). 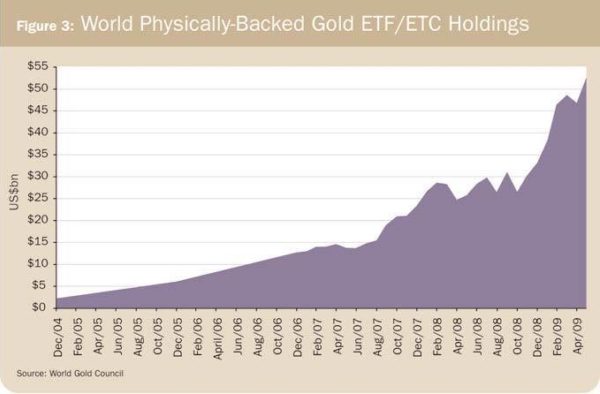 In a world of relatively flexible exchange rates, there is no dam to break. A more likely scenario is a gradual but steady flow of assets away from paper currencies towards hard assets – particularly gold – as governments step up reflationary policies and their debt levels build. Already this is being reflected in rapidly growing investment demand for gold as illustrated by the GFMS statistics below.

Exchange Traded Commodities (ETCs) and ETFs have become one of the main ways for investors and the public to gain access to physical gold. Assets in gold ETCs rose to over $53bn by the end of May 2009, up from less than $5bn only four years ago. Flows into ETCs have continued to build even during periods when the gold price has been falling, indicating that strategic investors are increasingly using ETCs to build long-term positions in gold.

ETF Securities, physically-backed gold ETCs, ETFS Physical Gold (PHAU) and Gold Bullion Securities (GBS) have seen over $2bn of new inflows over the past 12 months and over $1.4bn since the beginning of the year. Total gold holdings of these two ETCs now stand at $7.1bn, the largest ETF holdings in Europe and second largest in the world. 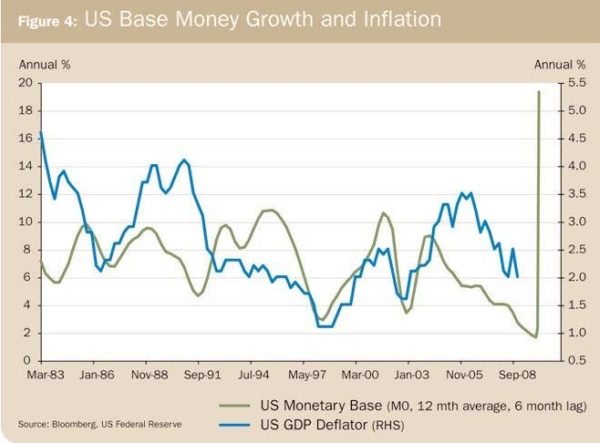 There is a risk that the massive monetary stimulus being injected across world financial systems will eventually find its way into real economies and ultimately into prices. It is hoped, of course, that central banks will be given the political leeway to retract the monetary stimulus before high inflation becomes entrenched. Unfortunately, history shows that great monetary stimulus is often followed by rapid inflation increases. Certainly, this was the case after the Great Depression, when deflation was swiftly followed by high inflation. As Figure 4 shows, we are now seeing an unprecedented surge in US base money growth. Although the lags can be long (depending on economic and policy conditions and the time it takes to repair banks’ balance sheets), there is a clear link between money growth and inflation. If history is anything to go by, after a period of deflation, the world may swiftly move into a high inflation environment. If this scenario plays out, gold will likely be a strong outperformer for many years to come. 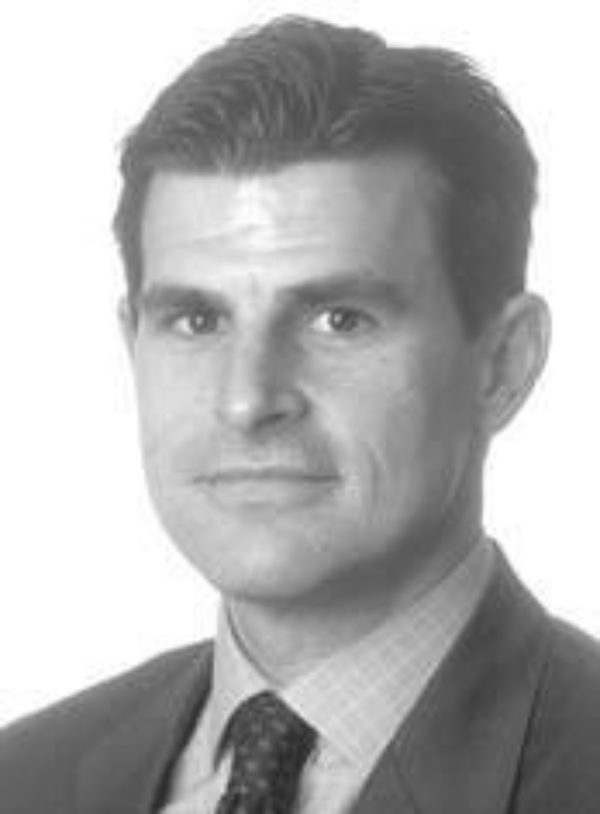 Nicholas Brooks is Head of Research and investment strategy for the ETF Securities group of companies. Nicholas has over 15 years’ experience as a global economist and strategist, covering a wide range of markets and asset classes.

Prior to joining ETF Securities, Nicholas was a senior member of Henderson Global Investors’ asset allocation and strategy team based in London. Before that he was senior economist on Deutsche Bank’s top- ranked Global Markets strategy and economics team.

He started his career at Citibank in New York. Nicholas has a BA from Brown University, an MA from Columbia University, a MSc in Economics from the University of London.