Jastram’s Golden Constant: How is it relevant today?

In his foreword to the new edition of Roy Jastram’s “The Golden Constant” Pierre Lassonde(1) wrote: “This book, more than any other, has given me my lifelong passion for understanding the role of gold in our societies.” 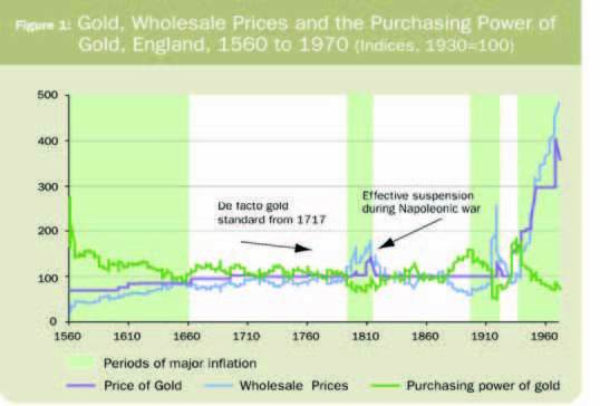 The Golden Constant was the first statistical proof of gold’s property as an inflation hedge over the centuries. For this, and for its masterful examination of the behaviour of gold and its purchasing power against the background of political and economic events, it is rightly considered a seminal study.

However, when published in 1977, it was too soon to assess whether gold’s long-term inflation hedging characteristics would persist after the gold price was freed in 1971. The new edition, to which I had the privilege of adding two chapters to Jastram’s original work, was able to start doing this. This article will summarise the main findings of the updated version and attempt to draw some conclusions for the present.

The approach adopted by Roy Jastram was in essence very simple (although executing it was certainly not): research (when necessary) and construct an historical index series of the gold price; research (when necessary) and construct an historical index of prices; divide one by the other to compute an index of the real value of gold; and then examine the behaviour of these three series over time against the political and economic developments. His main analysis goes back to 1560 for England/UK and to 1800 for the USA.

What did Jastram find and do his findings still hold after 1971? I suspect that two of his conclusions will surprise some people since they are counter-intuitive and contrary to current experience. He concluded from his research that: Gold is a poor hedge against major inflation and that gold appreciates in operational wealth (purchasing power) in times of deflation. Have a look at Figure 1, which shows the gold price, the price index and the index of the purchasing power of gold for England from 1560 to 1970. This shows how gold prices and wholesale prices broadly kept pace with each other but also how in times of inflation – until 1650, the Napoleonic wars, around World War 1 and then from 1950 onwards – the general price level moved up faster than gold so the purchasing power of gold fell; vice versa in times of deflation. 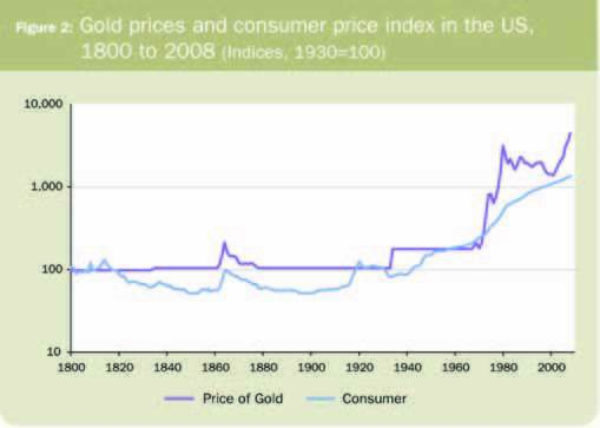 While at first sight it may seem strange from the perspective of the present day that gold lost value in times of inflation in the past, there is in fact a simple explanation. Gold was either money, or closely related to money, throughout this period. In times of inflation when prices rise the value of money falls. Hence it is entirely logical that gold’s purchasing power behaved that way in the past.

But from 1971 the opposite is true and we revert to what we today consider the more normal situation of gold acting as a hedge against inflation, as in the 1970s, or the fear of inflation, as in recent times. 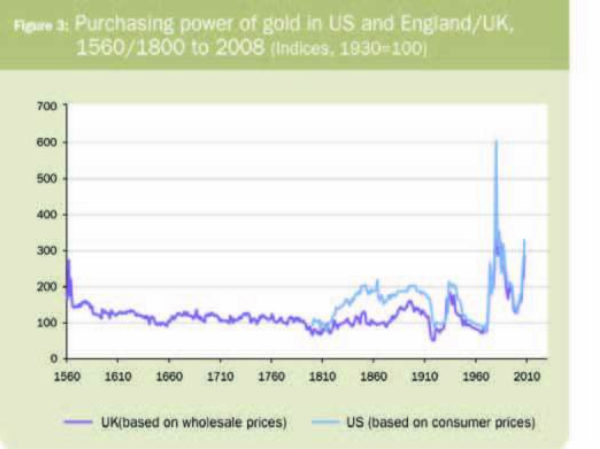 In contrast, Jastram’s main conclusion - that despite often substantial fluctuations gold has held its purchasing power over the centuries – still applies. Figure 2, for example, shows how gold and consumer prices have broadly kept pace with one another in the USA from 1800 to the present. Figure 3 shows the purchasing power of gold from 1560 in England/UK and from 1800 in the US. Its purchasing power has fluctuated, sometimes sharply. But in both countries it fluctuates around a roughly horizontal line – a stable level. 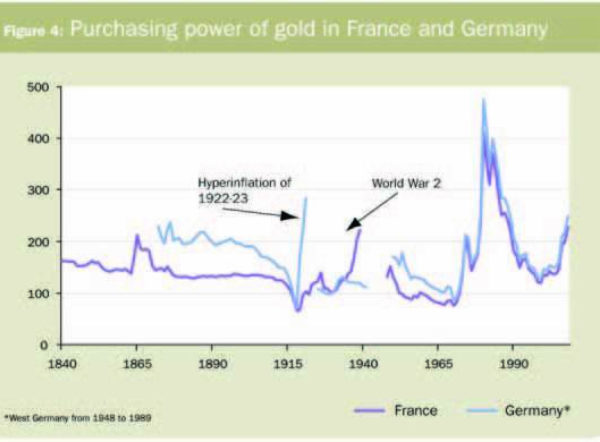 Perhaps even more remarkable is the experience of some other countries we look at briefly in the book. France and Germany, shown in Figure 4, suffered more severely from the wars of the 20th century than either the UK or the US. France was defeated and occupied during the course of World War 2 while Germany was defeated and suffered complete economic and political breakdown at its end. Germany also experienced the hyperinflation of the early 1920s.Yet again, while gold’s purchasing power fluctuated, and while at times the lack of market exchange rates or the statistical problems associated with hyperinflation impose breaks in the series, the same conclusion holds. A German family owning a certain quantity of gold at the end of the nineteenth century would find, if it still owned it today, that it would still buy approximately the same quantity of goods and services. In contrast any quantity of German currency held at the end of the nineteenth century would today be worthless.

For an economist it is not entirely surprising that if the long-run stability of gold’s purchasing power holds in one country it holds in all since in theory exchange rates should over the long term adapt to changes in inflation differentials. Nevertheless the 20th century is an extremely severe test of this.

Why does gold have this power of broadly holding its purchasing power over the centuries and what lessons can, or cannot, be drawn for present times?

Clearly the conclusion applicable to the pre-1971 period, that gold’s purchasing power fell, almost automatically, in times of inflation and rose, again almost automatically, in times of deflation no longer applies in current circumstances. There are also arguments which can largely explain why during much of the time up to the World War 1 gold held its real value; for example the classical gold standard with a fixed gold/currency parity acted to keep prices stable over the long term thus making gold’s long-term purchasing power also stable (the book had more details on this).

But the longer-term constancy of gold’s purchasing power and the fact that this still persisted after World War 1 and in particular after 1971 is a different matter. Its constancy over the centuries, through a huge range of economic and political circumstances, through calm and crisis, peace and war, and through immense changes in the gold industry itself, is remarkable.

Two factors are worth mentioning as to why gold’s purchasing power has remained broadly constant. First gold’s appeal to humans, apart from its relatively limited industrial use, lies in two elements: the human need for security and the desire to own something of beauty. These are human needs that do not change over time. The desire for gold as an object of beauty or adornment goes back for millennia. The book, and the history of the 20th century, amply demonstrates its use in a crisis and thus how it responds to the need for security. Hence there is a constancy of demand for the metal to match the better- known constancy of supply, in that above- ground stocks of the metal change only slowly over time.

The second key point is perhaps the alternating fluctuations shown in the chart and the fact that for the last hundred years gold’s purchasing power will rise for a period and then fall back by a comparable, if not always exactly similar, amount. Gold, no one’s liability, can be viewed as the alternative to fiat money. Investors turn to it when confidence in fiat money, and particularly in the US dollar as the world’s leading fiat money, falls: that is when they perceive that its value is diminishing or might be about to diminish. A fall in the value of currency can come around for two reasons: either due to inflation, which is why gold is seen as an inflation hedge, or through depreciation against other currencies, which is why gold often acts as a dollar hedge. Lack of confidence in the system can also develop through either political or economic concerns, which is why gold is seen as a safe haven.

It seems to be part of human nature that good times and bad times alternate. For a while all is well with the global economy, confidence grows but then can turn to over confidence and problems arise. This can happen to a relatively minor extent, as in the early 1990s, to a serious but geographically limited extent, as in the Asian crisis, to a more serious extent as in the current crisis, or to a really serious and prolonged extent as in the 1930s. And occasionally it happens to a catastrophic extent as in times of war. When people are confident many people do not see the need for a “safe haven”. When problems occur, or are foreshadowed, the need becomes more obvious. This alternation contributes to longer-term constancy.

There are two conclusions from the book, therefore, that I think are particularly relevant to today: the fact that gold, despite sometimes severe fluctuations, does hold its real value over the centuries and the fact that it has repeatedly shown its ability to safeguard wealth through crises. Jastram’s work, however, provides much more than that to anyone working in the gold market today. Gold has a strong and deep emotional pull on human sentiment. But deep emotion does not always lend itself to rigorous thought. The richness, depth and complexity of gold’s long history can make a long and difficult study but historical perspective can be a major influence in individuals’ attitudes towards the yellow metal. So the combination of intellectual rigour in Jastram’s approach, his historical analysis and the way he wrote in both a scholarly and entertaining fashion (this is not a dry academic tome) is what makes his work so important for the gold industry.