The Commitment of Traders Report and its usefulness

“Speculative fever grips the gold and silver markets” has become a ubiquitous headline, but keeping track of what speculators are doing would be far more difficult than it already is without the weekly Commitment of Traders Report of the Commodities’ Futures Trading Commission (CFTC). For decades, this has helped analysts to make some sense of trading dynamics on the Comex futures markets, by splitting the participants up by their reason for trading futures. 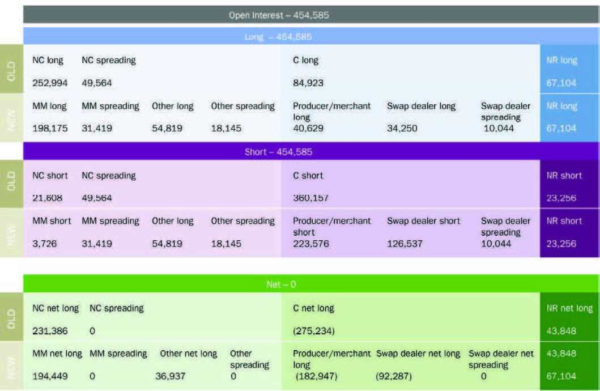 As of September this year, the CFTC has enhanced the report to further refine these categories. In theory, this should give us a greater understanding of the market – but does it really?

The Comex division of the Nymex futures exchange remains the most liquid and widely used exchange for trading gold and silver futures. The exchange provides daily information on the amount of futures contracts outstanding, their strike price and date of maturity. This is useful as far as it goes, but as all futures contracts have two sides – a long and short – it tells us little about whether speculators are long or short. This is where the Commitment of Traders (CoT) report is useful because, as of the close of business each Tuesday (although the report itself is released on Friday), it records the long and short positions of three categories of market-user: commercials, non-commercials and non-reportables. Traditionally, as the commercials are seen as entities using the market for hedging business risks (the CFTC describes them as “engaged in business activities hedged by the use of the futures or option markets”), the non-commercials are assumed to represent speculative interest. Most analysts also add in the positions of the ‘non-reportables’, (which are simply contracts held by users that did not meet the minimum reporting size), as small users of futures markets are more likely to be speculators than hedgers. In gold and perhaps silver this is almost certainly the case, but it is not necessarily so for all commodities. As these entities hold different amounts of long and short positions, one can see whether speculators are collectively net long (own more long contracts than short contracts), and follow the changes on a weekly basis.

The reform of the CoT report has come about because of political concern - largely inspired from within the US - as to the role speculators may have played in pushing up the prices of some agricommodities and energy products, and whether the report was accurately measuring them. So the reform, in a way, has nothing to do with gold or silver; it’s more of an attempt to foster greater transparency in those futures markets that are of daily concern to US legislators - crude oil and agricommodities - because last year’s soaring prices in the market have attracted the most voter anger. In particular, it has been argued that the CoT report was understating investment by not accurately recording a relatively new and large user of futures markets, the commodity index funds. This, it is alleged, is because although some commodity index fund buying will be done directly, and so show up in the non-commercial category, much of it is done by swap dealers, who typically are categorised as ‘commercials’, as they are ‘hedging’ their exposure to investment funds. So, the theory runs, not only might the report underestimate investment, but if the net long of commercials is rising then, by definition, the net long of non-commercials, what we have called ‘speculators’, will be falling, which could give a misleading picture of investment trends.

Swap Dealer: A “swap dealer” is an entity that deals primarily in swaps for a commodity and uses the futures markets to manage or hedge the risk associated with those swaps transactions. The swap dealer’s counter- parties may be speculative traders, like hedge funds, or traditional commercial clients that are managing risk arising from their dealings in the physical commodity.

Money Manager: A “money manager,” for the purpose of this report, is a registered commodity-trading advisor (CTA); a registered commodity pool operator (CPO); or an unregistered fund identified by CFTC. These traders are engaged in managing and conducting organised futures’ trading on behalf of clients. Other Reportables: This comprises every other reportable trader that is not placed into one of the other three categories.

The following tables show how the new report compares to the old report for gold and silver as of 29 September, the date of the latest release at time of writing. It is important to remember that the categories ‘commercial’ and ‘non-commercial’ are only being disaggregated – they still contain the same number of contracts, and hence the same longs and shorts as before. So, taking gold, we begin with open interest – the total number of outstanding contracts on Comex – which was 454,585contracts.(1) As futures have a long and short side, this means that there were also 454,585longs, which in the old report were split into a non-commercial long of 252,994 contracts, non-commercial spreading (which is where an entity has both long and short contracts) of 49,564 contracts, a commercial long of 84,923 contracts and finally 43,848 of non- reportables. The new report splits the non- commercial long and the non-commercial spreading into two further categories, making four in all – 198,175 contracts of managed money longs, 31,419 managed money spreading, 54,819 other reportable longs and 18,145 ‘other reportable’ spreading. Note that the longs and the spreading contracts still each total the same as in the old report, and therefore collectively they equal the total of the old non-commercial category. This means the residual ‘non-reportable’ long category also remains the same, at 43,848 contracts.

For the short side, exactly the same analysis applies as for the longs, with the same disaggregated categories.

The net position, which is the longs minus the shorts, by definition has no spreading category, as these cancel out, and therefore, it is rather simpler – clearly showing how the two reportable categories in the earlier report are now split into two new categories, with the non-reportables the same.

So have we learnt anything new? On the non-commercial side, not a lot. Where we had non-commercial, we now have ‘managed money’ and ‘other reportables’. Of those, managed money is clearly useful, being obvious speculation/investment demand. Across all 22 commodities in the new report, gold and silver have the highest ‘managed money’ long, at 44% and 33% of open interest respectively, which intuitively seems right. But of course all of this was previously in the non- commercial category, and as we don’t see any reason not to continue adding the category ‘other reportables’, to get total investment/speculative demand, we in fact still have the non-commercial category as before. In other words, the disaggregation isn’t very illuminating – and is unlikely to become so unless as we get more data both in the past (the CFTC has promised to release two years’ back data imminently at the time of writing) and, in the future, showing that the two categories reveal very different trends.

But reform of the non-commercial category wasn’t the real point of the new report. Instead, it was concern that speculative investment in commodities was being ‘hidden’ in the commercial category via swap dealers’ hedging of index fund investment. The new report separates out swap dealers from those entities that are hedging more obviously commercial activity. Interpreting this category for gold and silver is tricky, as rather than showing a huge undiscovered investment position, in both gold and silver, the swap dealers are net short. In gold, this net short was 92,287 lots as of 29 September (made up of longs, including spreading of 44,294 contracts, and shorts, including spreading of 136,581 contracts), equal to 20% of open interest. For silver, the effect is less pronounced but still there – swap dealers were net short by 2,241 contracts (with longs and spreading of 19,594 contracts offset by shorts and spreading of 21,835 contracts) as of 29 September, about 2% of open interest.

This doesn’t tally with what we know about index fund investment in gold and silver, which is that both are substantially net long. The CFTC’s Quarterly Investment Report estimates that, at the end of June 2009 (the nearest available date), index fund exposure in gold was 113,000 contracts long and 40,000 contracts short, while in silver it was 38,000 contracts long to 11,000 contracts short. While not all of these will translate into actual futures contracts held on Comex (traders will net off positions held both long and short before using the futures market) we believe most will be.(2)

1. This is the futures-only report – there is also a futures and options report. Normally the wider report is better, but as index funds typically invest in futures only, we will use that report in this article.

2. Comparison of the 12 agricommodites where the CFTC publishes a weekly index fund report to the Quarterly Investment Report suggests that there are fewer longs and shorts held on the exchanges than notionally would be needed but the net (long/short) position is much the same. 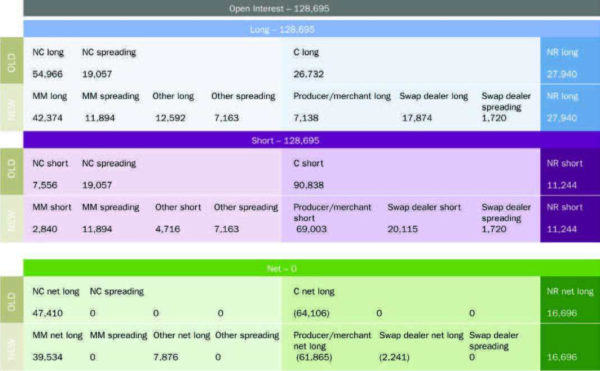 We can use these figures to say what is the maximum amount of investment in both metals that might be hidden in the swap dealer category. For gold as of 29 September there were swap dealer longs of 44,294 contracts, of which 10,044 were spreading, so also short. It is possible that all 44,294 longs were hedging long index fund positions (although swap dealers clearly have other risks that they hedge), which as 10,044 of those were spreading contracts would also imply in that category were 10,044 index short contracts,(4) meaning a net long index position of about 34,000 contracts. If this was the case, then to fully count investment in gold on Comex we could add to our non-commercial net long of 231,386 contracts and our non-reportable net long of 43,848 contracts another 34,000 more net longs for index investment that were hidden in the commercial category. For silver, doing the same calculations, i.e. assuming the entire swap dealer longs are index investment, we could add another 18,000 longs to the non-commercial net long of 47,410 contracts and non-reportable net long of 16,696 contracts. Neither of these two additions is huge, and not something that invalidates using the non-commercial category to gauge investment trends, but they do represent an eighth more gold investment and 28% more silver investment than we would estimate from looking at the non-commercial and non- reportable categories alone.

3. Although for the 12 agricommodities where the CFTC publishes index fund data on a weekly basis the two categories do normally match up reasonably well.

4. It is possible, because the CFTC classifies entities not trades, that of the swap dealers’ 34,250 spreading contracts all 34,250 held long were hedging index fund exposure, but none of the 34,250 held short were not. But it is rather unlikely. 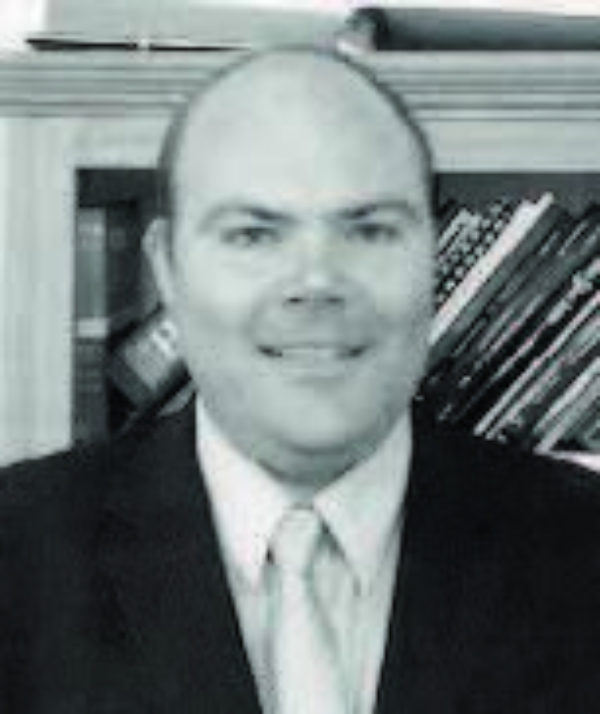 Matthew Turner has been with VM Group since 2001 and covers precious metals, agricommodities and economic analysis and forecasting. Prior, Matthew was an economist at the World Gold Council and a researcher at The Economist. He holds a BA Hons in PPE from Magdalen College, Oxford University and an MSc in Economics and E-Commerce from Birkbeck College, University of London.