200th Anniversary of the 1810 Bullion Committee: A landmark in the history of the London market

This year marks a unique anniversary in the history of the London Bullion Market. Precisely 200 years ago, in February 1810, the House of Commons set up a Select Committee on the High Price of Gold Bullion to investigate why it had risen during the Napoleonic Wars. 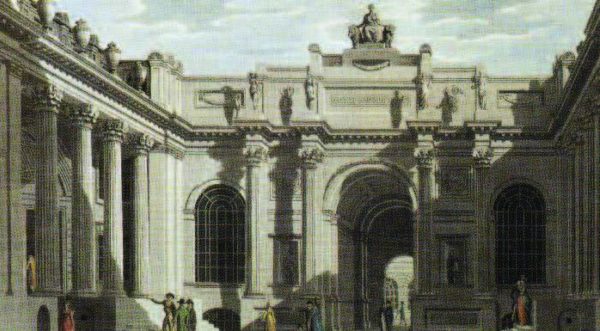 Since the Bank of England ceased to redeem its bank notes in gold in 1797, as its reserves were eroded by the war, the price was up 20% – extraordinary because it had been fixed at£4.25 per ounce in 1717 by Sir Isaac Newton, Master of the Mint, and this ‘gold standard’ had been stable for decades ever since. Now it was £4.65. What had caused the escalation? “The debate,” J. K. Galbraith declared, “was the most famous in all history on money and its management.” It also put the spotlight on the London Gold Market. Not just the Governor of the Bank of England and the Clerk of its Bullion Office gave evidence, but also brokers, refiners, fabricators, merchants and exchange dealers. Every word of their testimony is in the Minutes of Evidence, which provide an account of the market from price- fixing, the role of the Bank’s Bullion Office as the crossroads, to refiners and their sources of gold. Such a hands-on account has never been repeated.

During the 18th century, London had, according to one Bullion Committee member, “become the trading metropolis of Europe”, not least in precious metals. Brazil had been the major gold producer since 1700. Most of the metal came to London, where the Bank of England built the first real ‘official’ reserves, to back its note issue, sending gold to be minted into guineas, which had become the daily currency. Silver from Mexico also poured in, but was swiftly shipped to India, which offered a higher price, by the East India Company (virtually no silver was coined). The silver was marshalled through contracts with its broker, Mocatta & Goldsmid (now ScotiaMocatta), which was also the exclusive broker in gold to the Bank of England, a role it had already played for almost one hundred years. So both Bank and broker were privy to virtually every deal.

The Bullion Office was almost as old as the Bank, though it began as the Bullion Warehouse, its Clerk, John Humble, told the Committee. Humble was a venerable figure, who worked there from the 1770s until the 1830s. “It has been established upwards of 100 years,” he said. “I understand it to have been instituted merely for the purpose of accommodation and safety between merchant and merchant as a place of deposit.” The name had changed from Warehouse to Bullion Office around 1770. It was both minder of the Bank’s own gold reserves and the crossroads of gold and silver entering or leaving the country. 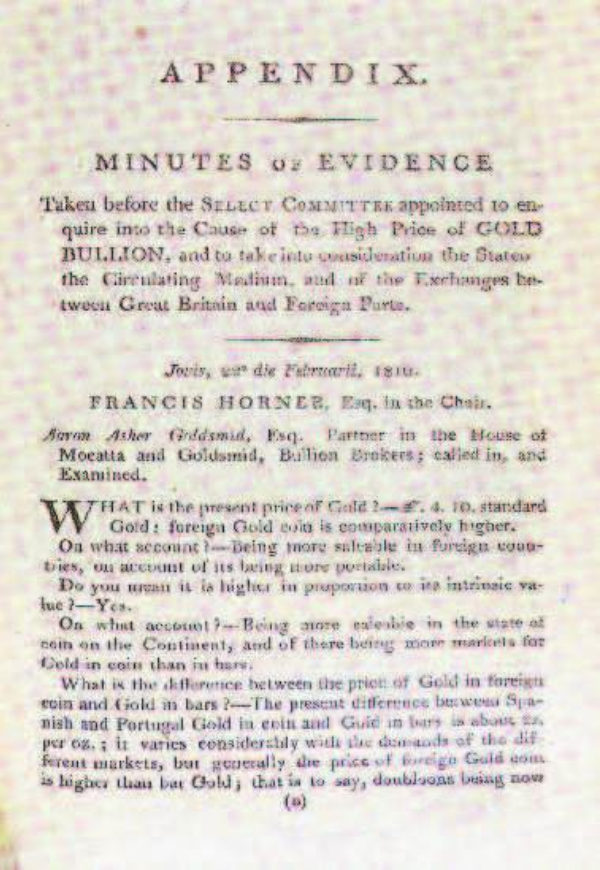 The testimony of Aaron Asher Goldsmid, the first witness before the 1810 Bullion Committee.Credit: Courtesy of The London Library

“The business of the office is divided into two branches,” John Humble explained. “The first is for the purpose of weighing and ascertaining the value of the bullion in which the Bank is concerned; the other, in which individuals only are concerned.”

The Committee wanted more explanation. “What do you mean by ascertaining the value?” – “By weighing, calculating the fineness according to the Assayer’s reports, and casting up the value according to the prices.”

“Where do you get the prices?” – “From the Broker’s reports made to the office, either on account of the Bank or individuals.”

“Is there more than one broker?” – “Only one house, there are several partners in the firm, the house of Mocatta & Goldsmid.” Humble went on: “The bullion is deposited…by ship-masters, and lies…for the owners to whom it is consigned; we keep separate books for entering these deposits, one of which we call the packet-book, and the other the man-of-war book…We enter a manifest of deposit, the name of the ship- master and the consignee…the number of packages and what those packages are said to contain, for we receive them only as packages. When a sale takes place, that is transacted by the Broker between the seller and buyer, he giving a contract to each; the parties come to the office, and in their presence the package is opened, the bullion weighed, we deliver the quantity to the seller…the whole of this is done by the Bank gratuitously.”

The Committee had a final question. If there was only one broker, “have they, in your opinion, any power of control over the price?”– “None in the world, I believe.”

This was confirmed by Aaron Asher Goldsmid, the 25-year-old partner, who was fielded by Mocatta & Goldsmid to face the investigation (the firm was founded by Moses Mocatta in 1671 and became a partnership with the powerful Goldsmid family in 1779). Asked initially, “Are there any other dealers in Gold but yours?”, he replied curtly: “I apprehend none of considerable amount.”

The key question was how the price was determined. Goldsmid replied: “By ascertaining the general disposition of the buyer and seller and stating the medium.”

“Have you any reference in fixing the price, to the prices in the foreign market?- “Certainly.”

“How do you ascertain that?” - “By enquiring the last price of various merchants and generally the disposition of the market concurs with the prices abroad…there is seldom any great fluctuation unless some great influx or rise…and any considerable repression of the exchange would tend to raise the price, which might arise from many causes…such as a particular demand for Gold on the Continent…of money going out of the country for the payment of troops abroad.”

This was a practical comment. Although the Bullion Committee ultimately decided the prime cause of the high gold price was over-issuing of bank notes by the Bank since it no longer redeemed them in gold; the short-term demands on the market for gold and silver coin came from the British, French and other armies on campaigns to meet their expenses. Moreover, Goldsmid explained, since the pound sterling was weak, gold flowed out to Amsterdam, “the greatest market on the continent” to pay for grain imports. Gold was often in short supply. Twice, the demand was met only by the arrival of East India ships laden with Indian coin lured back by the high price (early dishoarding), which Mocatta snapped up at the dock for the Bank to dispatch to the Mint for new coin for Wellington’s armies.

The crucial intermediary for delivery was then Nathan Mayer Rothschild, newly arrived in London, whose courier network across Europe, through his brother James in Paris, became indispensable. Each courier carried up to 20 kilos of coin in special jackets or saddle bags. However, to his annoyance, Rothschild was not accepted as an official broker by the Bank (that did not come until 1842). Another small dealer, James Sharp, also applied, but had to wait decades for Bank approval, though the firm, as Sharps Pixley, eventually became a leading market member until taken over by Deutsche Bank in 1993.So, in 1810, the modern market was emerging, but exclusivity was the watchword.

Only one refinery, Browne & Brind, had its bars of 200 ounces at 916 fine accepted at the Bullion Office. Curiously, it did not give evidence to the Committee, but two other refiners spoke up. Samuel Binns of William and Jacob Wood (a refinery possibly dating from Elizabethan times) reported he bought up foreign coin, ‘light’ coin (it was illegal to melt guineas) and bar gold “from people who came to our house”. He sold foreign coin through Mocatta, “whose price rules our price completely”. The rest went to jewellery manufacturers (total hallmarking of gold jewellery by the Assay Office at Goldsmiths Hall in 1809 was 34,000 troy ounces).

William Merle of Cox and Merle, who called himself a “banker and gold refiner”, took in foreign coin and “a great deal of Gold dust from Africa…4,000 ounces recently…near 3,000 ounces coming now”. The African gold, he added, was made into bars and sold through Mocatta, who charged commission. Most of the bars went to Amsterdam.

Around this nucleus of the Bullion Office, Mocatta & Goldsmid and refiners were some 20 merchants and exchange houses, which did international business in gold and silver. Several names are familiar – Baring Brothers, Coutts & Co., C. T. Cazenove and, the newcomer, N. M. Rothschild. The most significant, however, was Goldsmid & Eliason, which had close links with Hamburg and Amsterdam. The firm had earlier been involved in an unsuccessful attempt to round up gold in Hamburg in 1797 and ship it to the Bank of England in an effort to stave off the suspension of payments in gold against bank notes. Moreover, the senior partner, George Goldsmid, was the father of young Aaron Asher Goldsmid, himself partner in the brokers Mocatta & Goldsmid and the first witness before the Bullion Committee. To add to the Goldsmid contribution to the 1810 Committee, yet another family member, Abraham Goldsmid, a partner in Goldsmid & Eliason, was called in to give evidence. He proved perhaps the most knowledgeable on the market, rattling off gold prices and exchange rates across Europe. For the Goldsmids, the 1810 Bullion Committee was very much a family affair, with their testimony, along with that of John Humble of the Bullion Office, offering us a fascinating account of the market 200 years ago.

The full story of the l8l0 Bullion Committee is in The Ages of Gold by Timothy Green, published by GFMS Ltd http://shop.gfms.co.uk 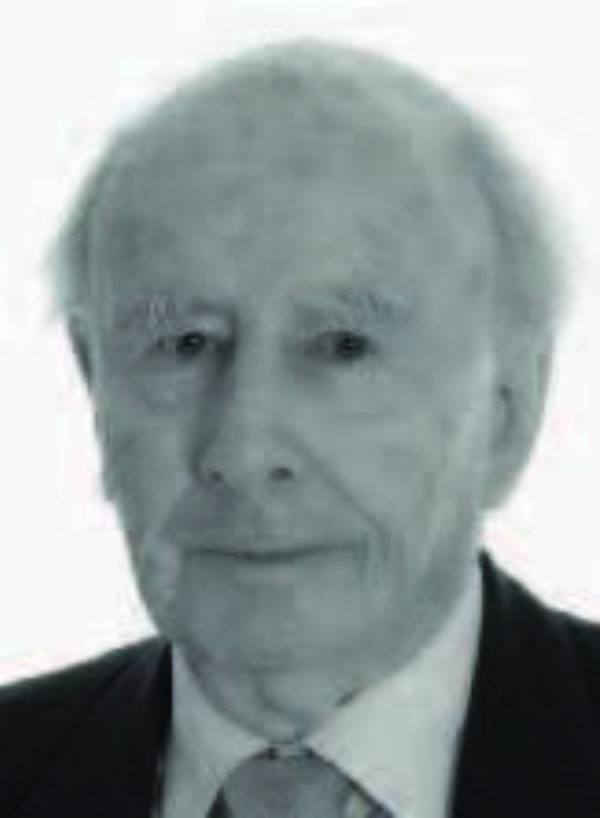 Timothy Green has been writing about gold for over 40 years; his first book, The World of Gold, came out in 1968. He was a consultant on the annual gold survey started by Consolidated Goldfields in 1968 and now continued by GFMS Ltd for three decades. His latest book, The Ages of Gold, is published by GFMS Ltd.