"Loco London" is a phrase added routinely at the conclusion of a bullion deal or used by commentators when analysing the importance of the London bullion markets. Not everyone perhaps will be familiar with what lies behind this phrase or with its significance in comparison to the volume of bullion business worldwide. The reality is that London is the global clearing centre for gold and silver in much the same way that all US dollar transactions are ultimately cleared in New York or Japanese yen in Tokyo. 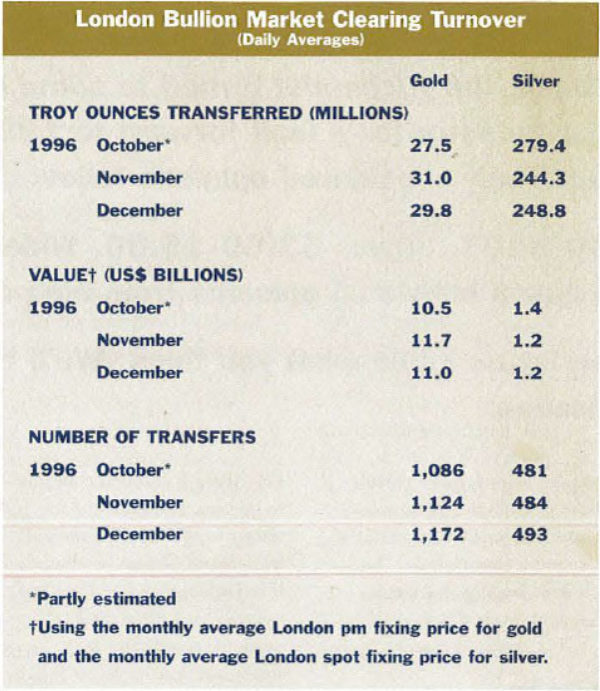 Now, for the first time, the LBMA is lifting the veil to quantify the volume of bullion business cleared in London by publishing statistics provided by the eight Clearing Members*, for whose co-operation we are most grateful. This article introduces and explains the statistics.

The figures shown in the table below are now being collected each month. Subsequent figures on the same basis wilI appear on the new LBMA Reuters pages described in this issue and in the LBMA's quarterly Market Statistics. The expectation is that over a period they will both give a useful insight into trends in the volume of global bullion business and provide a measure of the prominence of London in the international bullion market.

Thus, over the last quarter of last year, when the LBMA began to collect the statistics**, some 30 million troy ounces (say 930 tonnes) of gold were tr1msferred on average each day, with a value of over $10 billion in something over 1,000 separate transfers. The figures for silver were some 250 million troy ounces (nearly 8,000 tonnes), valued at over $1 billion in just under 500 separate transfers each day.

For these figures to be correctly understood it is necessary to give some definitions. The figures contain:

In order to minimise double-counting, only the debit side of each transaction is recorded by each Clearing Member. To this extent, we can be confident that the figures are not over-inflated. However, in the opposite direction, many individual transfers are the result of the netting of multiple debit and credit transactions. It is not possible to gross the figures up for such transfers and to this extent, therefore, the figures are an under-estimate, possibly sizeable, of the actual volume of bullion business.

Excluded from the statistics are:

What, then, do these figures mean?

First, they are large by any standards, but just to put things into a modicum of perspective, the average daily turnover in the London foreign exchange market in April 1995 - the date of the last Bank of England survey - was $464 billion, some 40 times larger than the daily bullion clearing turnover in the last quarter of last year. However, the level of bullion turnover is very comparable with turnover in some individual currency pairs on the London foreign exchange market.

Secondly, it is important to differentiate these figures from those in the Bank of England's survey of volume turnover as described in the article in this issue. The latter gives a measure of the trailing turnover (spot, forward, options, etc.) of the then 14 Market-Making Members of the LBMA in May 1996. If one adds the approximately 7 million ounces of gold shown in the Bank of England's survey to comparable statistics of average daily turnover on Comex and Tocom (roughly 3 million and 1 million ounces respectively), then an indication begins to emerge of London's significance as the cleariJ1g centre for international bullion business.

Finally, to add further perspective, the volume of gold cleared daily in London is almost twice the annual production of South African mines and closely equivalent to the average level of gold holdings among EU central banks. For silver, the 8,000 tonnes transferred each day would require some 400 articulated trailer lorries to transport. Imagine the nightmare such a convoy would create on theM25 in the rush hour!

**Note that the figures for October 1996 are partly estimated because not all reporting institutions' computer systems were fully set up. However; the results are thought to be not substantially different from those that would have appeared from a wholly computerised system; they can, therefore, be taken as reasonably comparable with subsequent figures