Silver Investment in the United States and India

While India and the United States stand out as two of the most important drivers for silver investment demand, how they do it is a study in contrasts. The roots of their silver investment are well established and the past several years of global economic turmoil have only served to reaffirm these two nations’ affinity with the white metal. 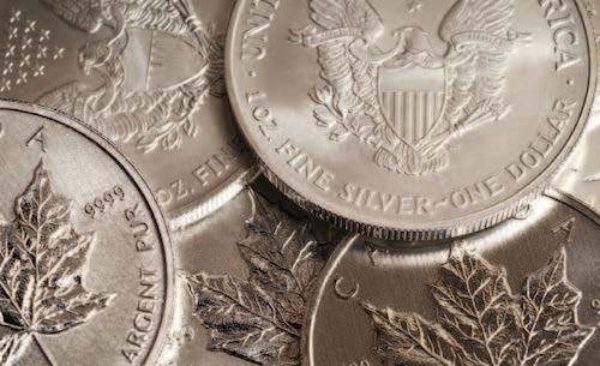 Indian silver demand, like gold, is largely fuelled by rural investors, mainly farmers who seek to convert some of their income into savings in the form of bangles, other jewellery and decorative ornaments. Shifts in demographics are slowly changing investment patterns in India, as increasing numbers move to urban areas. The June-to-September monsoon season remains an important factor in silver demand and bountiful rains are often the harbinger of upticks in investment.

The United States has a rich history of silver mining and investment. American investors have long had a predilection for physical silver, favouring coins and bars to stash investment cash. On the retail side, many smaller investors like the portability of coins and smaller bars, and the discretion that comes with such investments. More sophisticated investors have sought to leverage silver investing with mining shares and mutual funds and more recently with exchange-traded funds (ETFs). 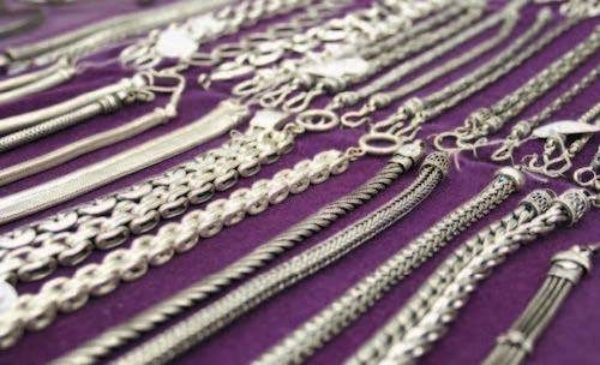 When examining current silver investment in the United States and India, it is important to look at the global picture. Over the course of the last three years, world investment has more than tripled, rising from 61.7 Moz (millions of ounces) in 2007 to 215.6 Moz in 2009.1 From 2008 to 2009, global silver investment leapt by a staggering 184%.

Perhaps one of the most important developments in the silver investment market in the past 50 years was the advent of precious metals ETFs in 2004. These investment products, which trade like stocks, have served to ‘democratise’ global silver investing by making it convenient for retail investors who might otherwise have eschewed silver investing because of the difficulties of storage, insurance and assaying. That convenience, coupled with a global financial crisis and greater shifts toward portfolio diversification, has pushed the silver price higher in recent years. Examining ETFs more closely, total holdings in 2009 rose by 132.5 Moz, ending the year at 397.8 Moz. The growth was the product of increased holdings of the three funds that were active at the beginning of 2009, and the launch of new silver ETFs in Australia and United States last year. On the whole, between 2005 and year-end 2009, the silver price increased a staggering 141%.

1.World Silver Survey 2010, which is produced by GFMS Ltd on behalf of the Silver Institute 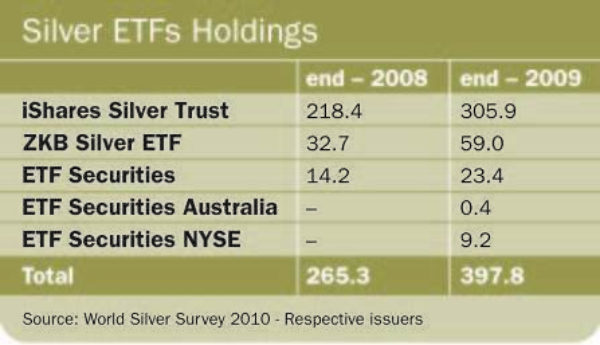 Silver Investment in the United States

In the United States, physical investment in silver is dominated by the purchase of one- ounce bullion coins and 100-ounce bars. The bars are almost entirely produced locally. However, the surge in demand during 2008 saw a number of other institutions start to produce their own bars, including private mints and industrial manufacturers.

The coin market is dominated by the US Mint’s Eagle one-ounce bullion coin. A number of overseas bullion coins have also proved popular in the United States, particularly the Canadian Maple Leaf, although for example the Austrian Vienna Philharmonic and Australian Kookaburra, Lunar and Koala coins have all achieved some success.

The silver Eagle, first introduced in 1986, saw sales remain broadly stable during much of the 2000s, averaging 9.4 Moz during 2000-2007. However, since 2008, minting has increased substantially, with total coin output in both 2008 and 2009 achieving successive records of 19.6 Moz and 28.8 Mo. Furthermore, 2010 is on course to post a new record high, with combined January-to-July sales up 27% year-on-year. Demand for these coins is so strong that the US Mint has at times struggled to keep pace. At the heart of the problem is the difficulty in sourcing sufficient planchets (or blanks).

The growth in silver investment demand during 2008 pre-dated the collapse of Lehman Brothers, although the ensuing credit crisis led to heightened retail demand. This surge also led to heightened retail purchases of 100-ounce bars. Again, demand was so marked that shortages emerged in the bar market, which encouraged a number of new entrants to begin their own production.

In 2010, although US bar demand has fallen noticeably, US coin minting has continued to grow, driven by firm demand at home and overseas, principally in Western Europe, encouraged by Europe’s sovereign debt crisis.

In terms of recent trends in the Indian market, the record level of investment in 2008 was due to a combination of strong demand from urban dwellers and from silverware/jewellery fabricators. 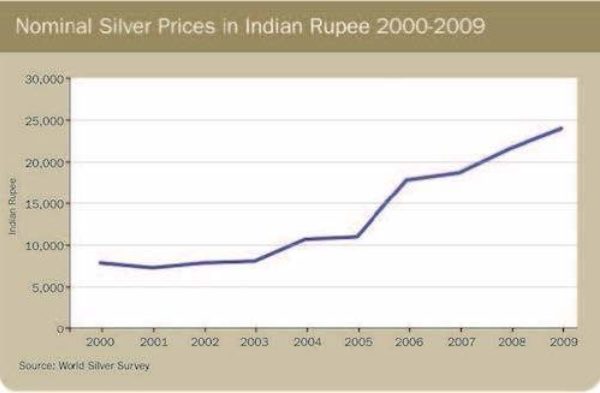 Today in India, investment in silver continues to take place in what might be termed ‘traditional forms’, namely heavy, high-karat, low-labour, plain silver jewellery (silverware, as a form of investment, has been adversely affected in recent years due to under-karating), as well as through the hoarding of bars. In contrast, coins are a small fraction of the overall Indian investment market.

Silver jewellery forms the bulk of investment in rural areas, while urban centres show a preference for lower mark-up bars. That said, some rural areas have also developed an interest in bars, particularly those that are well connected to cities. Overall, retail jewellery consumption grew by 6% in 2009, again driven primarily by an improvement in demand from rural areas, which are the backbone of the heavy jewellery market in weight terms. The modern jewellery segment saw considerable growth in 2009, both locally and for exports. Among other things, higher gold prices spurred substitution into silver. Ongoing urbanisation, concerns over elevated prices and issues related to under-karating continue to hold off a significant swing to the upside in this segment.

Notwithstanding the preferred form of investment, there still exists an active two-way market for each segment. In this regard, while jewellery would typically be sold back once in a given year (mainly during May and June to fund the sowing of monsoon crops), the trading in bars might be more frequent, being more dependent on changing investor price expectations.

In terms of recent trends in the Indian market, the record level of investment in 2008 was due to a combination of strong demand from urban dwellers and from silverware/jewellery fabricators. Both of these groups deemed prevailing silver prices to be undervalued, with expectations therefore of strong future gains. Conversely, the rush to disinvest in 2009 was arguably of little surprise, given that rupee silver prices had broadly fulfilled investors’ expectations, resulting in both actual dishoarding and the manufacture of bars into jewellery and silverware, which would also be classified as dishoarding. This pattern was spread throughout the year, despite the fact that until July the average year-on- year silver price was some 7% lower. According to GFMS, this disinvestment was not price-related and essentially was the consequence of the conversion of bars, acquired by the trade the year before, into jewellery and silverware. Toward the latter part of the year, disinvestment took a more conventional form – investors taking profits on escalating prices.

This year, it appears as though India may see a modest return to net hoarding. With local prices hovering around Rs29,000/kg at the time of writing, many investors have been discouraged from entering the silver market. It therefore appears that prices below Rs25,000/kg may be required to stimulate retail interest in the Indian market. However, as gold continues to push higher, the Indian investor’s desire may increase, especially if bountiful monsoon rains bring better harvests. 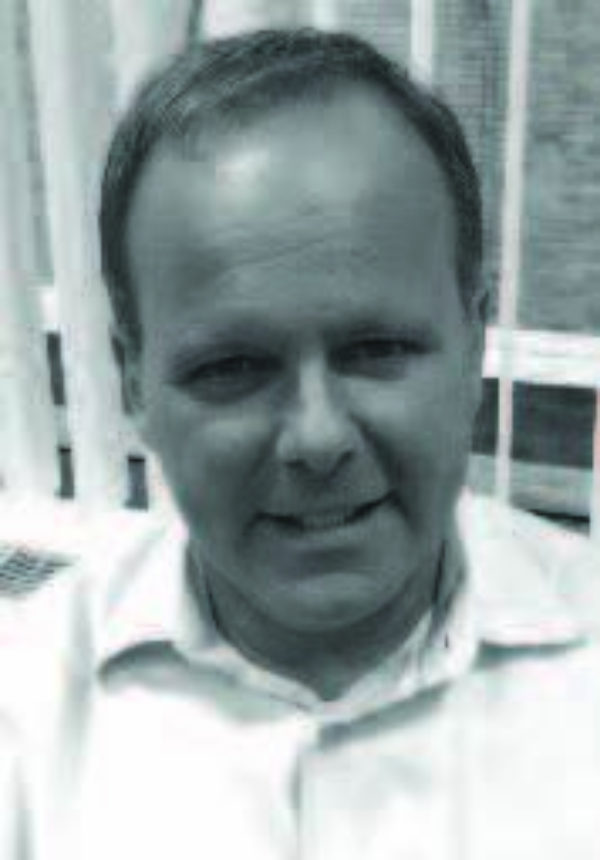 Michael DiRienzo serves as the Executive Director of the Silver Institute, an international association whose membership comprises major participants in the silver industry. In that capacity, Michael manages the Institute’s overall daily activities, budget development and management, implementing the annual plan, and public affairs activities.

From 1999-2002, Michael served as Vice President of the Gold Institute, managing that association’s government and public relations activities. Prior to 1999, Michael served as a government affairs representative for Janus/Merritt Strategies, a political and strategic management firm. Michael also represented a member company of the Toyota Group as Director of Government Relations. Formerly, Michael served as Legislative Assistant and Press Secretary to the Chairman of the House Rules Committee, U.S. Congressman David Dreier (R-CA). During his tenure with the Chairman, Michael worked on Banking Committee and Small Business Committee issues.