Silver’s industrial demand has greatly expanded its role in the global silver market in recent years. A number of factors have played a crucial factor in this growth, not least of which is silver’s unique technical proficiency, which makes it suitable for a wide range of applications while also limiting the ability of industrial users to shift in favour of less-costly alternatives. 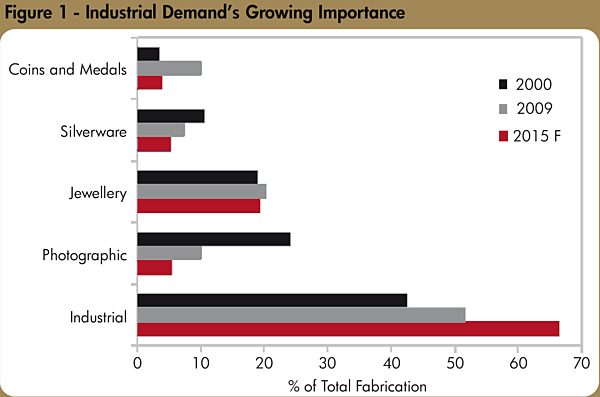 Silver is one of the best electrical and thermal conductors, which makes it ideal for a variety of electrical end uses, including switches, multi-layer ceramic capacitors, conductive adhesives, contacts and in silvered film in electrically heated automobile windshields. Silver is also used as a coating material for optical data-storage media, including DVDs. Silver is employed as a catalyst and used in brazing and soldering as well. It is also incorporated into health and medicinal applications given its natural antibacterial qualities.

You’ll find silver in many of the electronic devices we use today, including cell phones, plasma-display panel televisions, personal computers and laptops. Silver is also incorporated into button batteries, water-purification systems, automobiles, and it is a component of the growing photo-voltaic industry, to name just a few of its applications.

In fact, a healthy outlook for global silver industrial demand is forecast for the next five years according to a recent report. The report, The Future of Silver Industrial Demand, was produced by the precious metals consultancy, GFMS Ltd., on behalf of the Silver Institute, and it examines silver’s industrial uses in detail through 2015.

The report states that industrial uses of silver should rise sharply to 666 Moz in 2015, representing 60 percent of total fabrication demand that year – a 36 percent increase over 2010’s figure of 487 Moz. The report maintains that stronger silver industrial demand in the US and Asia will be a key factor in driving growth in the global total through 2015, and healthy developing country demand especially in markets such as China and India will also be an important factor. Much of the forecast growth will come from established applications, such as silver’s use in electrical contacts and in the photo-voltaic market.

The report also focuses on many new uses that rely on silver’s antibacterial qualities, where the incorporation of silver makes the difference between an ordinary product and a unique one. Noteworthy in the report is the potential market impact of 11 recent applications that incorporate silver. These uses, which range from food packaging to radio-frequency identification tags to autocatalysts, taken together could exceed 40 Moz of industrial demand by 2015. Emerging end uses that benefit from silver’s antibacterial properties or incorporate silver’s electrical and thermal conductivity are expected to boost silver consumption through 2015.