Last evening, I bumped into somebody who asked Derek Engelbrecht and I if we were lost at this conference, because they felt it was just a gold conference, so very good of the LBMA to include us for this afternoon session. 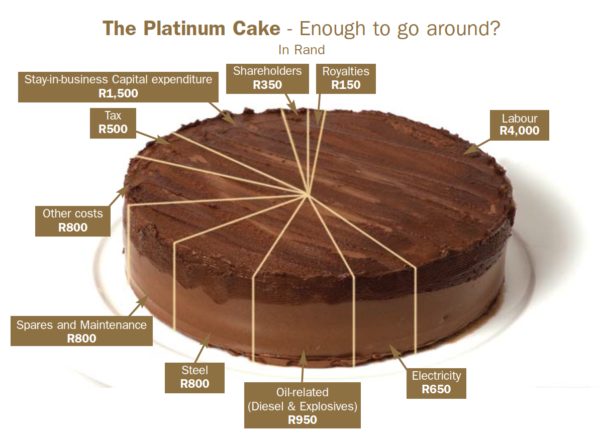 We are in North America, the prestigious capital of the world. As some of you know, my colleague Gavin Mackay is a reformed lawyer – no offense to those lawyers present – and he is terrified of what I might say, so in addition to this, I do apologise to a few folk. I have knocked off some statistics, figures, half- truths and whatever from people, including the likes of Mr Trevor Raymond of Amplats, so it is not all my work here.

So how did I end up here? It is because of women. Yes, I am weak. Yes, I am easily led astray, but the lovely Margaret Davis and Edel Tully press-ganged me into this and naturally I could not say no. The last time I spoke to the LPPM, I talked about Tax Freedom Day, the day on which the earnings of a platinum company finally belong to the shareholders, and we concluded it was somewhere in December, so this year we are going to talk about the platinum cake.

The Platinum Cake – How Delicious Is It?

For those of you who follow South Africa, you will know this is a theme based on that well-known, prominent politician of ours, Mr Julius Malema. He made a statement about sharing the delicious cake and so I am going to talk a little bit about what this cake actually amounts to.

I also realise you have heard a lot of this stuff before. The whingeing and moaning of the South African platinum producers: “We are making no money, the world is coming to an end, the sky is falling in”, so at times I may go a little bit off-piste and talk a little bit about the nationalisation debate. Julius Malema is the proponent of nationalising the mines in South Africa and has gone on record as being in favour of expropriating the farmland without compensation. It sounds almost as if we were living in that country to the north of us on the other side of the Limpopo. I am actually giving you two presentations for the price of one, which you would expect as we are a low- cost producer and we are a little bit cheap.

The cake reflects about 10,500 rand per PGM ounce, as it was last week. It is lovely and it is not all gold. It is only about 1% gold and I will remind you that it is a mix of platinum, palladium, rhodium, ruthenium, iridium and the like, and at today’s prices that ounce is only worth $1,490 and not $1,800. People wonder why the platinum industry is looking a touch anaemic just now, but I will remind you that gold does not equal platinum in this current crazy world. We are receiving circa $300 an ounce less for a run-of-mine ounce than you would find on a traditional South African gold mine, despite having head grades that are similar and cash costs per ton that are similar. In addition, the process of extracting the PGMs is far more lengthy, complicated and more expensive than gold; hence, our margins are currently significantly less than those in the gold industry.

However, is that cake enough to keep a miner happy? What happens is you have your revenue line and then the folk start lining up to feed at your trough. Let us start with royalties. That is government in one form or another.

Royalties are modest in South Africa. They are however EBIT-based and because our EBITs are low, royalties are low. In the event that the margins improve in this industry, royalties will become an ever- increasing part of the equation. In Zimbabwe, the folk at the trough have now got royalties up at 5% of gross and are talking about much higher levels.

Then you move on to the other sort of folks, labour, and it is much talked about. In Zimbabwe, approximately 35% of cash costs are labour. On a deep-level platinum mine in South Africa, labour could be as much as 60%. Over the last 10 years, we have watched labour costs exceed CPI to the amount of roughly a 90% increase over CPI. At last count, on-mine labour is up probably 150% to 160% in South Africa, clearly an unsustainable proposition going forward.

Electricity was once cheap in our part of the world, but we are now facing electricity costs that are on a par with the US or Europe, and that is before our dear state-owned enterprise Eskom requests another 25% per annum for the next two years, catapulting us into probably some of the highest cost power in the world.

For electricity-intensive industries such as platinum and gold in South Africa, it is an unsustainable situation going forward. This is not an example of the benefits of nationalisation.

I will talk just a little bit about the nationalisation debate. It is much talked about. Those of you in the gold industry watched Mr Chavez nick the Venezuelan gold industry. Let us think about what Julius is proposing for us.

In the 1950s, Chile created Codelco and you have watched Codelco’s share of the Chilean copper production go from 75% to 25% to 30% now. Even the Chilean President is now criticising the inefficiencies, griping about the stagnant production and the climbing costs of the Chilean copper industry. Chile did, however, in parallel, allow the creation of privately owned copper enterprises in Chile, which, as you well know, have flourished in the intervening period.

Zambia is a case study of the ill effects of nationalisation; Mr Kaunda took 51% of the copper mines in 1974. He managed to turn a 700,000-tonne copper industry into a 220,000 tonne a year industry in 25 years. Tellingly, since privatisation, the output of copper in Zambia has doubled in 10 years to around 400,000 tonnes.

In the 1960s, Ghana was a 900,000-ounce gold producer, for those aficionados of that base metal, and became a 300,000-ounce producer by the 1980s, so in 20 short years. Since the reprivatisation of the Ghanaian gold industry, production has risen to 2.9 million ounces, up tenfold. I think it is proven to you that privatisation and private enterprise work better than nationalisation.

In an Investec study, it quotes that ‘the South African government is already creaming approximately 55-80% of the turnover of the average South African mining company in terms of its total take’, which is a great deal of money considering the fact that they have taken none of the risk.

For governments, enough is never enough in regards to taxation. It is a fact of life, and as you know what they say: ‘Life is a bitch and then you die.’ I think the important thing is that, in terms of a study from Business Leadership South Africa, if the South African mining industry had been in state hands through the period of the global financial crisis, the cash deficit that the South African mining industry had for the 2009 year – in excess of 20 billion rand – would have had to be funded by the taxpayer. That would have amounted to probably 15% of the annual tax take. In a country that is worrying about hospitals, infrastructure and the like, I am just not sure what the politicians are thinking when they say they should be in the mining game too.

In an Investec study, it quotes that ‘the South African government is already creaming approximately 55-80% of the turnover of the average South African mining company in terms of its total take’, which is a great deal of money considering the fact that they have taken none of the risk. I would leave you to judge what nationalisation amounts to.

I think this is the most important thing that people have missed about the South African platinum industry. Everyone is focused on margins. They think you are having a very nice time. You have a gross margin of 20% or 25%. What they forget is that the South African mining industry is going deeper. It is getting more costly and there are additional social costs. Grades are declining and the stay-in-business capital – the capital you must spend to replace the ounce you take out today in order to have a productive future – is the iceberg under the water. It is the elephant in the room.

On a post-CAPEX basis, the platinum industry in South Africa is barely making any money right now. The reality is that the market has woken up to this. I am not sure the consumers of these metals have fully awakened to the fact that, unless we get substantial and significant returns for the risks taken, this is all that the shareholders will be left with. By my calculations, it is about 4%. For Julius, that is probably more than enough. I think the reality for us is, for the risks taken, for the effort that goes into mining platinum, returns greater than 3% or 4% are needed.

Business Leadership South Africa quoted a 7% return for the platinum mining industry. At a presentation in New York last week, Ospraie quoted 5%. When you consider that copper, iron ore and maybe even gold produce better returns, it is a reality that prices must move up or the rand must weaken – or both – in order for the world to get enough of this metal in the future for the clean air applications that we heard about earlier today.

After obtaining his degree in Chemical Engineering from Imperial College, London, Mr. Murray commenced his career in 1984 with Impala Platinum Holdings Limited. Following a 17-year career in the South African platinum industry, Mr. Murray joined Aquarius Platinum Limited in May 2001 and was appointed Chief Executive Officer.