Modern Russian investment coins began to be produced in the early 1970s. Owing to a severe domestic food shortage, the authorities in the former USSR decided to import grain from the USA, Canada and Argentina in exchange for gold. 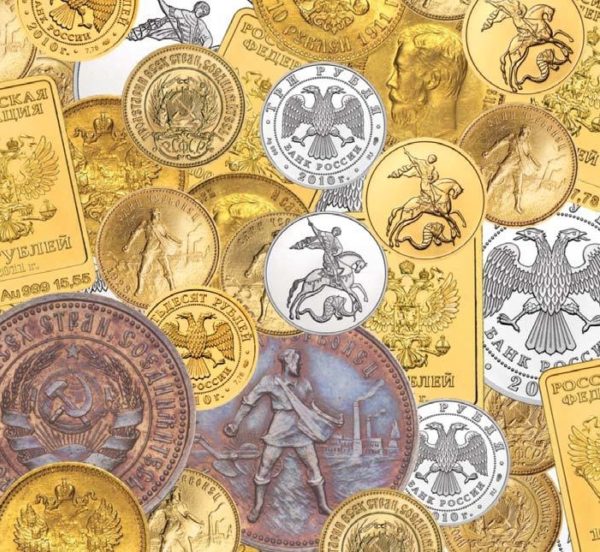 Those countries interested in securing long-term contracts with the USSR suggested that the Soviet government pay some of the contracts using investment coins. These coins typically trade at a premium of between 5% to 10%. In 1975, the Central Bank of the USSR issued the first consignment of 250,000 gold 10-rouble coins (Au-900, 7.742g). Between 1976 and 1982, one million coins were minted annually. In 1980, a further 100,000 gold 10-rouble coins of ‘proof’ quality were issued to mark the XXII summer Olympic Games in Moscow. In addition to payments under foreign trade contracts, 10-rouble coins were sold to foreign tourists in exchange for foreign currency. These 10-rouble coins were not in circulation within the USSR.

Historical note: The 10-rouble coins minted between 1975 and 1982 were a repeat minting of 10-rouble coins minted in 1923, which were also produced for sale to foreign countries. However, in 1925, western European states introduced a ‘gold blockade’ against the USSR by excluding ‘Seeder’ 10-rouble coins from being used as a means of payment. To circumvent the blockade, Russia used the gold intended for minting the 10-rouble coins in 1925 and 1926 to mint the pre- revolutionary 10-rouble gold coins of Tsar Nikolai’s reign (presumably by using the impresses of 1911), which were not subject to restrictions of the ‘gold blockade’. In total, more than 2 million pre-revolutionary pieces were minted.

In 1924, a decision was taken to issue coins with a new design, with the State Emblem of the Russian Soviet Federated Socialist Republic (RSFSR) being replaced with the State Emblem of the USSR. However, since only proof copies were ever issued in 1925, these coins are now extremely rare. At present, only a handful of 10-rouble coins dated 1925 are known to exist, two of which are kept in the State Museum of Fine Arts, named after A.Pushkin, and another three are kept in the GOZNAK museum. Minted proof copies of the 10-rouble coin were also made in copper and only one copper 10-rouble coin is known to exist. This was sold in April 2008 at the ‘Collectors’ Russian Coins and Medals’ auction in Moscow for a record price of RUB 5 million (the opening price was RUB 1 million).

By 2005, when stocks of 10-rouble coins in the Central Bank of Russia’s vaults began to run low, the Central Bank of Russia’s Board of Directors took the decision to issue a new type of investment coin for the first time since 2006 – the St. George the Victory-bearer (Au-999, 7.78g), which was issued for a period of five years between 2006 and 2010, during which 3,420,000 gold coins were produced. 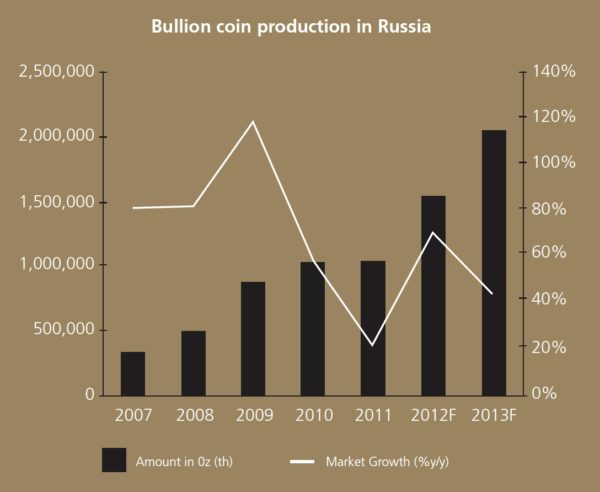 This period coincided with the start of the world financial crisis in 2008-2009. In 2009, the Central Bank of Russia promptly reacted to higher demand for coins from investors by increasing the production of St. George the Victory-bearer by twofold. In parallel with this, the Central Bank of Russia also issued St. George the Victory-bearer silver coins (Ag-925, 31.10g.). Between 2009 and 2010, 780,000 pieces were minted. This was a relatively small quantity, reflecting the fact that private investors in Russia prefer to buy gold coins, with silver coins typically being bought by individuals on low incomes.

The secondary market is represented by commercial banks purchasing coins from either private investors or ‘numismatic’ companies. Russian tax legislation requires private investors who have owned investment coins for less than three years to pay 13% tax on the proceeds of the sales. In general, the purchase and selling prices are determined by the laws of demand and supply in the market and can fluctuate widely. Although data on the size of the market is not available, in my opinion, the share of the market is split as follows: 75% private individuals, 15% banks and 10% numismatic companies. Although the presence of the commercial banks in the secondary market is insignificant, banks’ quotes for sale and purchase of coins are used as an indicative price for the rest of the market. The market for investment coins increased from RUB 4 billion to RUB 52 billion between 2006 and 2011. What other market could boast such an impressive rate of growth? We are anticipating even more impressive market growth over the next two years and we are forecasting that market volume will more than double to RUB 126 billion by the end of 2013. We believe that growth will be influenced by the Central Bank of Russia launching the Olympic monetary programme, under which it is planning to issue gold investment coins with a total weight of 1.25 million troy oz. However, in order for this to happen, we believe that the Central Bank of Russia will need to repudiate its agreement with Sberbank dated December 2, 2010. Pursuant to that agreement, the Central Bank of Russia granted to Sberbank the exclusive right to sell within Russia commemorative and investment coins under the Sochi 2014 programme. But we should remember that the more sellers there are in the market, the more opportunities investors have for buying coins at lower prices, as happened during the St. George the Victory-bearer monetary programme. 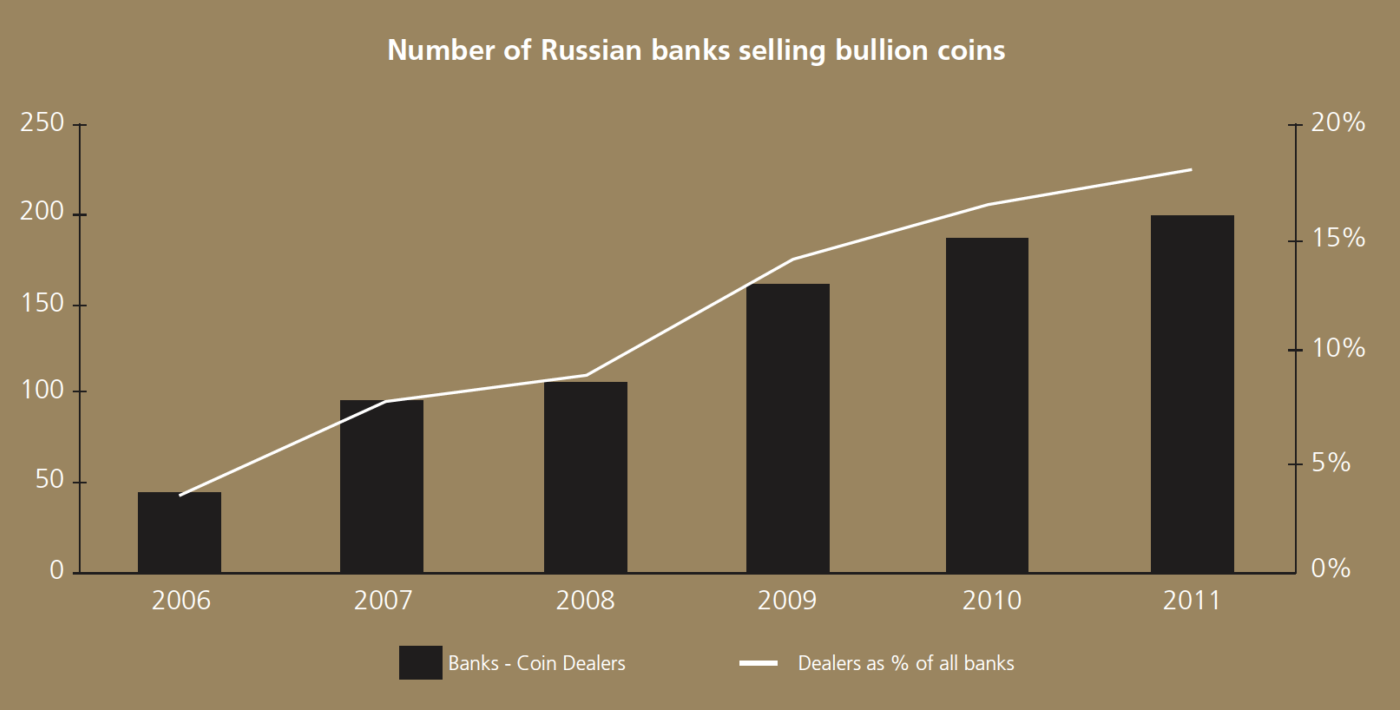 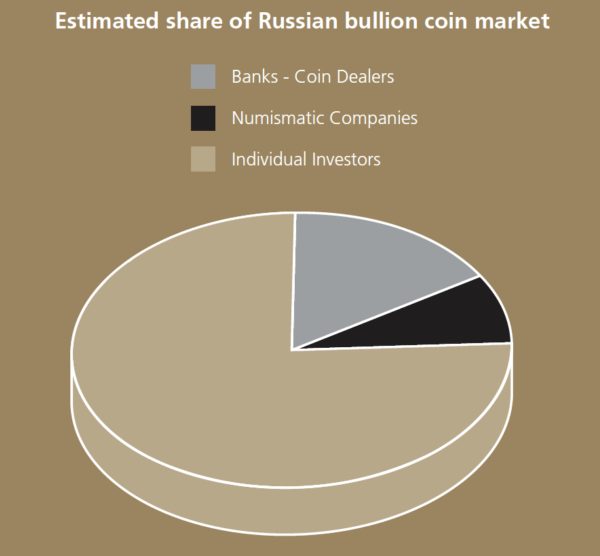 In view of the evolving circumstances, the prospects for the Russian investment coin market are uncertain, though we can envisage the following scenario. Sberbank establishes price terms for transactions with Russian investment coins for commercial banks, numismatic companies and private investors. As a result of this, commercial banks will either cease transactions with investment coins or start looking for alternative sources to purchase coins, for example by purchasing coins from abroad. Under Russian law, the purchase of coins containing precious metals, which are used as legal tender by Russia or a foreign state (a group of states) are not subject to 18% VAT. Kazakh investment coins ‘The Silk Road’ and ‘Golden Leopard’ will become the most easily obtainable coins in the future because there isn’t a customs border between Russia and Kazakhstan. The import of foreign investment coins by Russian commercial banks is a further potential source of supply. However, currently, the costs associated with doing so are prohibitive, because Russian banks have to pay duty of 20% of the coins’ contract value as well as import VAT of 18% of the contract value. It therefore makes little economic sense for the banks to import coins in this way. The only real solution would be for the Russian Government to significantly reduce these rates. But, as people say in Russia, hope springs eternal. The third way for foreign investment coins to enter the Russian market is via importation by private individuals. Private individuals are not subject to duty on import of precious metal coins up to the value of $10,000. But where can the necessary number of people be found? I think that if there is a stable demand for coins, such people will definitely appear.

But I still think that the Central Bank of Russia will find a solution that will be satisfactory for all participants of the Russian investment coin market, for example, by launching another monetary programme alongside the Olympic monetary programme.

In 1989 Valery graduated from the Moscow Institute of Cooperation. He received his second degree in Financial Management from the Moscow School of Economics in 1998, and has worked in banking ever since. In 2006 he became Head of the Precious Metals Department in the Bank of Project Finance and is now currently Director of the Precious Metals Department at MDM Bank. Valery is also a recognised expert in bullion coin.