The Early Development of the London Gold Fixing

The historic trading rituals of the London Gold Fixing provided it with an immutable quality. It appeared, in many ways, to be frozen in time. Recent analysis of documentary evidence reveals, however, that the practices of the Gold Fixing were far from static. Rather than developing over a relatively short period, they actually emerged over several decades, with the Gold Fixing only achieving its most recognisable form near the end of the 1930s. 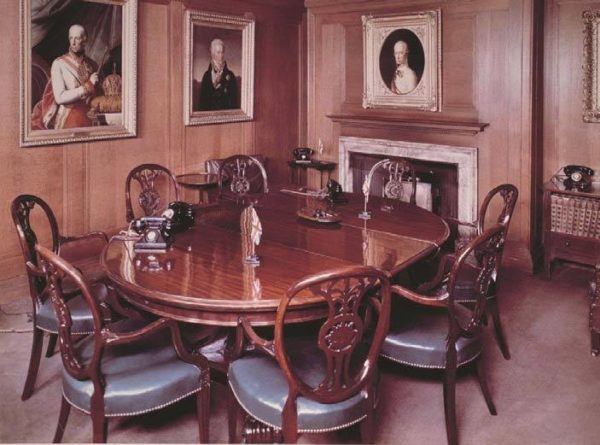 There is of course a well-known story about the development of the London Gold Fixing1. Tim Green, in his masterful unpublished history of Mocatta & Goldsmid1979), discovered evidence that the Gold Fixing existed prior to the First World War. It was an informal gathering of the four bullion brokers - Mocatta & Goldsmid, Pixley & Abell, Sharps & Wilkins, and Samuel Montagu & Co. - at which a single price of gold was established that cleared the market. The First World War halted the informal fixing, but after the cessation of hostilities, a more formal process was established on 12 September, 1919. At 11:00 that morning, N.M. Rothschild & Sons determined the best sterling price for gold. The merchant bank, which was not involved in the market making prior to 1914, was the main agent for the South African mining companies and had been invited by the Bank of England to act as the market's chairman. Once the price was determined by N.M. Rothschild & Sons, the four bullion brokers were granted the opportunity to bid on the gold. Just as in the period prior to1914, a single price was established at which the market cleared.

At first, market dealings were conducted over the telephone. Within a short period of time, it was determined that meeting in person would be far more practical. The bullion firms then began to conduct their negotiations at the offices of N.M. Rothschild & Sons. Initially, no outside communication was permitted during the proceedings and Johnson Matthey & Co. was not involved. Over time, however, the refiner was invited to join the Gold Fixing and telephones were installed, allowing the brokers to maintain communication with their respective offices. The term 'flag up' was adopted at some unknown time to signal the desire to pause the dealing process, with the physical Union Jacks flags being added at a later point in time (a gift to the market from George Matthey, a descendent of one of the founders of Johnson Matthey & Co).

Once the price was determined by N.M. Rothschild & Sons, the four bullion brokers were granted the opportunity to bid on the gold. Just as in the period prior to 1914, a single price was established at which the market cleared.

As outlined above, the history of the Gold Fixing was an informal affair prior to 1914 and became increasingly formalised after the First World War in what seemed to be a relatively short period of time. Recently discovered archival evidence suggests an alternative scenario. A Wall Street Journal article (see panel opposite) from 1907 contains evidence that the Gold Fixing was a far more formal affair than originally believed. The meeting was held at 13:45 - the start time of the Silver Fixing. Based on this information, it is highly likely that the Gold Fixing was held at Sharps & Wilkins and used a format similar, if not exactly the same, as the Silver Fixing. It was thus a well-established routine by 1907.

Based on this new evidence, the 'start' of the Gold Fixing on 12 September, 1919 instead represented a resurrection and reconfiguration of a formalised pricing ritual. While N.M. Rothschild & Sons became a participant and the pricing ritual was no longer held at the offices of Sharps & Wilkins, the Gold Fixing, in many ways, looked much the same as it did prior to the First World War. Such continuity conceals how the preservation of the structure and pricing method was far from guaranteed.

Discussions after the First World War about what form the London gold market should take were intimately connected to the Bank of England's (the Bank) desire to restore the international importance of sterling and the City of London. A key component of this strategy was to ensure that the London gold market retained its pre-1914 pre-eminence. Thus the Bank determined that South Africa's gold must be marketed in London. To accomplish this goal, the Bank negotiated agreements with the South African mining companies to ship their gold to London. After its arrival, the agent for the mining companies, N.M. Rothschild & Sons, would find buyers for the precious metal (Ally 1994).

Discussions after the First World War about what form the London gold market should take were intimately connected to the Bank of England’s (the Bank) desire to restore the international importance of sterling and the City of London.

The next challenge was to decide how the gold should be marketed. In their conversations with the Bank about the disposal of South African gold, N.M. Rothschild & Sons appeared to favour selling the gold directly to end users themselves - whether they were located in India, New York or some other location3.By selling the gold to the brokers in London, the merchant bank argued, the South Africans would receive less profit. In addition, N.M. Rothschild & Sons favoured utilising bilateral contracts. If two buyers each wanted a portion of the gold on offer at two different prices, the merchant bank would accept both bids4.

The Bank favoured, however, an alternative mechanism. The position of the central bank was that the gold should be disposed of in London through intermediaries in the market - the bullion brokers.

Not only should the gold continue to arrive in London, but it should be marketed there. In addition, the practice of establishing a single price should continue. The Governor of the Bank at the time, Sir Brien Cokayne, thus desired, “an open market for gold in which not only every seller would know that he would receive the highest price the world could pay but also every buyer would know that he would get his gold as cheaply as the world could supply it”5.

As evident by the first fixing on that Friday morning in September 1919, the wishes of the Bank were enacted. In pursuit of its goals to re-establish London as an international financial centre and clearing house, the Bank ensured that the London Gold Fixing was to be resurrected and in a manner consistent with its pre-1914 form. Yet the pricing ritual, as noted above, was different. Besides no longer being held at Sharps & Wilkins, not all the brokers were regular participants. It appeared that for the first few years, only Mocatta & Goldsmid was present at each fixing. By 1925, all the bullion brokers were at each meeting and, in 1926, Johnson & Matthey & Co. was invited to join the process.

If a stranger was to stop an average Londoner . . . to ask him the way to ‘the gold market,’ he would be answered with a stare of amazement. Even among the city numbers there are few who have actually seen the mechanism they admire so much. It is probably a mystery to them as to the ordinary public how gold is handled in London . . .

. . . At a place which, for obvious reasons, cannot be divulged, the bullion brokers meet punctually at a quarter to two o’clock. Some, or possibly all, of them have certain amounts of the precious metal to dispose of. Others may have buying orders, and there is nothing to prevent a broker acting for both sellers and buyers. . .

. . . By way of concrete example we may take their meeting of one Monday last month. It was an unusually interesting day, and very significant of the existing situation.

The demand for gold was keener than ever, and there were a good many small buyers in the market. The action of the Bank of England was uncertain, and still more so was that of the New York banks. Though the price was fixed at 77s. 93/8d., it was a question if the Americans might not go a fraction better. The Bank of England intimated through its broker that it would like to have all the gold available and would give 77s. 93/8d. for it. There is at present a tacit understanding that the bank is to have preference when it is willing to pay the best bid by any other buyer. In one corner of the city there is thus a faint survival of nobless oblige. The bank exercised its call on Monday’s gold.

From the board room the bullion brokers rushed to their offices. There telephones and telegraphs were set in motion to report results to clients in various parts of the world. Cable messengers reached New York almost as soon as an office in Throgmorton Street2 could be called up. Answering rings were soon heard, most of them inquiries from buyers who had been impatiently waiting the result of the official board.

The other elements traditionally associated with the Gold Fixing developed slowly. Phones appeared to only be introduced a few years after the 12 September, 1919 fixing- perhaps as late as 1923. Initially, only one phone was available for the brokers who had to “queue up in order to use it”6. In the chaos created in international monetary markets when sterling was decoupled from gold in September 1931, it appears that more phones were added. At this time, each participant was provided with their own line (the direct line between N.M. Rothschild & Sons and the Bank was only installed some time in 1936). Around 1931, the Gold Fixing also moved to its permanent home in the offices of N.M. Rothschild & Sons - the conference room initially known as 'Mr. Anthony's Room’. Prior to this moment, the pricing ritual took place in two other rooms on the same premises.

By the early 1930s, most of the elements of the Gold Fixing were in place, with the exception of one: the small Union Jack flags. Prior to their introduction, as noted earlier, the term 'flag up' was used. Unfortunately, the historical record is silent on when the flags became part of the pricing ritual. Some clues do suggest, however, that they were added in the 1930s and most likely after 1937. Besides descriptions of the Gold Fixing prior to 1937 containing no mention of the flags, the individual responsible for their introduction, George Matthey, only became actively involved in the Gold Fixing in 1939 (McDonald and Smyrk 1984). Given this latter piece of information, the flags might have only been introduced to the market as late as 1939 - perhaps as a patriotic gesture in the shadow of the oncoming war.

Thus by the start of the Second World War, the rituals synonymous with the Gold Fixing throughout the 20th century, were established. Attesting to their new permanence was that when the market resumed after an almost 15- year hiatus in 1954, the trading practices were reinstated. As noted above, the immutable hue surrounding the Gold Fixing's routines is, however, a relatively recent condition. The market's trading rituals slowly developed over several decades. Thus, it is now evident that the Gold Fixing was characterised by far more change than its traditional image might suggest.

Dr. Rachel Harvey is a Postdoctoral Research Scholar at Columbia University. Her research focuses on the history of global financial markets and the centrality of socio-cultural processes in their emergence and functioning. She is currently completing a book manuscript, The Golden Standard: the Moral Foundations of a Global Financial Market, which explores the globalisation of the London Gold Fixing in the latter half of the 20th century. Dr. Harvey is a Visiting Research Fellow at the Centre on Global Legal Transformation, Columbia University; a Researcher with the Global Finance and Law Initiative; and a Fellow with the Framing the Global Research and Publication Project, Indiana University.