London or New York: Where Does the Gold Price Come From?

Dr Brian Lucey, Charles Larkin and Fergal O’Connor consider a number of key questions about trading activity in the gold market. They present an academic perspective to questions such as where is the gold market price made, whether one market location has a predominant influence on the others and whether the price- making process is diffused.

The gold market worldwide is itself diffuse, with trading taking place on organised exchanges in dozens of locations. And yet, it remains in many ways bipolar.

Table 1 shows the dominance of London as a trading centre for gold with 86% of business occurring there, approximately 90% of which are spot transactions. While more than eight times smaller, America’s options and futures exchanges are vastly more transparent with a constant flow of prices and daily volumes; information inherently lacking in the London OTC market. And while the other main markets are growing they still account for just over 3% of turnover. Thus, analysis of the ‘gold market’ can be reduced, in so far as that is possible, to analysis of these two markets.

From this it is clear, first, that the main markets remain London and New York and second, that it is unclear who ‘leads the dance’. Although larger, the dominance of spot OTC trading in London makes its influence harder to grasp. Mere volume alone does not in and of itself make a market dominant.

This is not a phenomenon unique to gold. Equity and bond analysts have had to grapple with the issue of what market leads what for decades. There are a vast number of papers and analyses on which markets lead and which follow, at a macro level. More recently there have been advances in both economic and statistical methods that have allowed a degree of light to be shed on this issue at an individual asset level.

Consider for example ‘Siamese twin’ shares, where the same claim on asset is traded on two markets. Examples would include Royal Dutch-Shell or Unilever Plc/NV, or more generally cross-listed shares. Evidence is overwhelming that even when the shares should move together in a predetermined manner they do not. These shares therefore suggest that markets make prices not just on the basis of asset returns but also on the basis of some ‘local’ information.

If we think of gold we can imagine two spot markets, and see immediately that abstracting from travel and related costs, the price of an ounce of gold in one market should be approximately equal to the price in the other. With some modification we can see a similar argument for gold futures and gold cash markets.

Two approaches and a host of later alternatives and improvements to these have been developed to determine, statistically, the extent to which one market informs the price in another market. Hasbrouck (1995) and Gonzalo and Granger (1995) both use statistical techniques to look at a system of interrelated prices (such as the Siamese twin share prices) and to deconstruct these into what are called information shares.

They use two quite distinct approaches: the Hasbrouck (1995) methodology gives us upper and lower bounds for these shares while the Gonzalo and Granger (1995) model provides a unique level. Both rely on the concept that the prices of the two assets being investigated must share a common trend or a steady state to which they return. This is economically sensible, because if there were to be a long-term deviation from a stable relationship an arbitrage opportunity would emerge, and even without wishing to consider the market as being more than moderately efficient, such arbitrage would eventually act to bring the prices back into line. We can then, to simplify the matter considerably, consider these information shares as being the percentage of this fair or stable price that each market contributes.

We ran these models on two gold assets: the closing price of one month gold futures traded on COMEX and the London AM fix. We chose these as they are benchmark gold prices, and crucially the London AM fix always happens before COMEX closes. As such, any information that the fix conveys will, we assume, be largely incorporated into the price formation process leading to the COMEX close. Similarly the previous COMEX close price is well known and digested by the London bullion market prior to the auction that sets the fix. 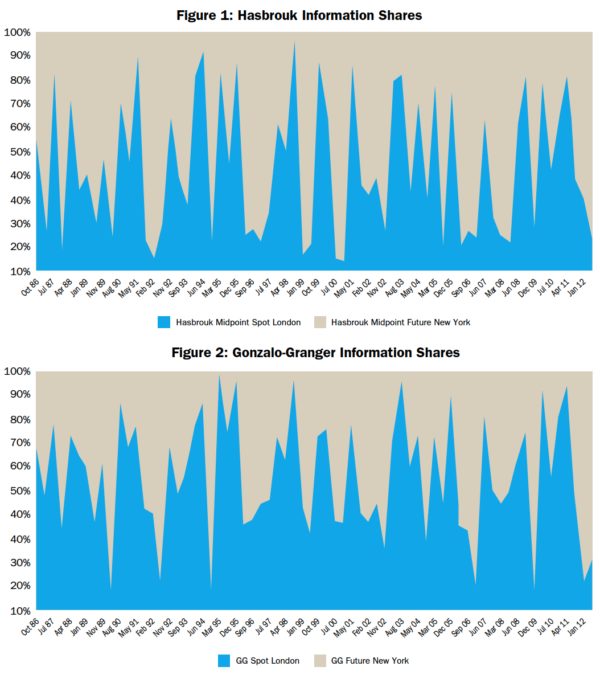 We looked at the prices from January 1986 through the end of July 2012, giving more than 6,500 observations. We subdivided the data into non-overlapping windows of 100 days, approximating four months’ trading. The work of Tully and Lucey (2007) suggests that shocks to the gold price decay relatively slowly, but would be well dissipated within that period. Figures 1 and 2 on page 9 show the estimated information shares from the two methods. If we define the dominant market as being that which contributes more than 50%, then the two methods agree more than 90% of the time. The broad message, in terms of which market is dominant, is very similar across the two approaches. For simplicity, we concentrate on the Gonzalo and Granger findings.

The initial analysis of the data does not show direct linkages to particular economic or routine political events causing switches between the London and New York markets. The transitions of prime ministers, presidents, Fed chairmen and Bank of England governors do not have any apparent impact on the switching between locations. Interestingly, changes in the Fed Funds rate and the Bank Rate of the Bank of England have no clear impact. There is a shift to the London market that coincides with the slow collapse of the Eastern Bloc beginning with the protests in the summer of 1989, which also coincided with the peak of the Japanese asset price bubble.

The interesting aspect of the 1990 switch from New York to London is that it happens around the time of the National Bureau of Economic Research (NBER) US business cycle change from expansion to contraction. The move to London remains for a series of important European political events related to the reunification of Germany, the fall of Thatcher and the move of the US business cycle towards expansion. Gulf War I does not seem to have any impact on the switching between London and New York, despite the traditional assumption that wars and other destabilising political events have profound impacts on the gold markets.

The switch back to London from New York happens again at the time of the 1992 exchange rate mechanism (ERM) crisis and the clear pressures being brought to bear on sterling. The brief switch to New York was reversed and dominance returned to London. Outside of the ERM crisis and the wave of devaluations across European monetary events, prior to the eurozone crisis, do not seem to have any impact on the switching of markets.

Global economic crises may have an impact on switching depending on their location and implied political implications. The switch from the London markets to the New York markets occurs at the start of the ruble crisis and the bailout of Long-Term Capital Management (LTCM) as opposed to the start of the Asian crisis. This may reflect the active discussions happening during the ruble crisis of the so-called ‘loose nukes’ problem that could be engendered by Russia becoming a failed state and the surprise to the US markets of the collapse of LTCM. By the time you enter the new year (and the Time magazine cover of ‘The Committee to Save the World’ has been published) the markets have switched back to London.

There is some active switching between markets between the dot-com bubble peak in March 2000 and the beginning of the dot-com bust recession in March 2001. Following the 9/11 attacks the New York market becomes dominant.

The New York market remains dominant throughout the downturn and into the expansion phase in the US economy before switching to London.

New York becomes dominant at the start of the global financial crisis just following the open concerns about US Treasury bonds. It remains dominant until August 2008. Interestingly London is dominant throughout the collapse of Lehman Brothers, with the market switching to New York only as the NBER contraction period comes to a close and the US begins its anaemic expansion. The final switch to New York in April 2011 does not seem to have been triggered by any geopolitical or economic event and must therefore be driven by the gold market itself.

The interesting aspects of the moves between New York and London are that they appear– except in examples of globally important phenomena – to be sui generis. The next question will be to try to understand, possibly via a behavioural or ethnographic study, what are the key decision triggers for gold market actors in switching the locus of ‘price maker’ from one market to another.

Dr Brian Lucey is Professor of Finance at the School of Business at Trinity College Dublin.

He studied at graduate level in Canada, Ireland and Scotland, and holds a PhD from the University of Stirling. His research interests include international asset market integration and contagion; financial market efficiency, particularly as measured by calendar anomalies and the psychology of economics.

Charles Larkin is lecturer in economics at Cardiff Metropolitan University.

He holds a PhD from Trinity College Dublin. He is also an advisor to members of the Irish Senate and has in the past worked for the NYPD.

Fergal O’Connor is a PhD student at Trinity College and part-time Lecturer at Preston University.

He holds a MA in economics from University College Cork and is the present holder of the LBMA Bursary.